FLASHBACK FRIDAY: The tires, they are a-changin' 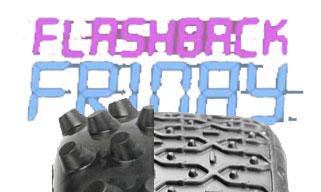 Everybody knows that Friday is meant for reminiscing old times. Each week we take you back in time as we flashback to some of R/C racing's greatest moments, products, drivers, and more!
Flashback: 1984
The evolution of 1/10-scale buggy tires included with Team Associated 2WD buggies
Tires play an important role on any racing vehicle - they’re the only part of the car or truck that actually contacts the racing surface. They’re particularly vital on a 1/10-scale 2WD buggy, which uses relatively narrow tires to control the most agile off-road vehicles in RC. Along with the vehicles to which they’ve been fastened, the tires used in the 2WD off-road category have transformed incredibly over the last 30 years, to suit the ever-changing world of competition.
Looking back at three decades of tire evolution paints a picture of the changes in track conditions, especially when considering the tires that manufacturers chose to represent their upper-echelon racing vehicles in press photos and box art. Up until the last half-decade or so, most manufacturers included a set of tires with even their top racing kits - typically a conservative choice for the vehicle’s intended environment. Though they knew hardcore racers would probably toss them in favor of the hot choice for their home track, the included tires would at least provide drivable traction and decent wear.
To find out just how much tires have changed since the birth of off-road racing, I dug through forums and web archives to find 31 years of photos and info to look at the tires Team Associated has included with their vehicles. With over a dozen different 2WD buggies spanning all the way back to the original RC10 in 1984, the choice to investigate AE’s best buggies was a no-brainer.
1984 - RC10
Tires: Associated Champion for original 1.7-inch wheel
With the RC10 modeled after single-seat racing buggies of the time, it only made sense that Team Associated would include aggressive knobby tires fit for digging through soft dirt. The tread was a bit larger than scale, of course, but was necessary to dig through sand, clay, and mud. The tires were hard and the rims trapped the air inside the tire, so foam inserts weren’t necessary. 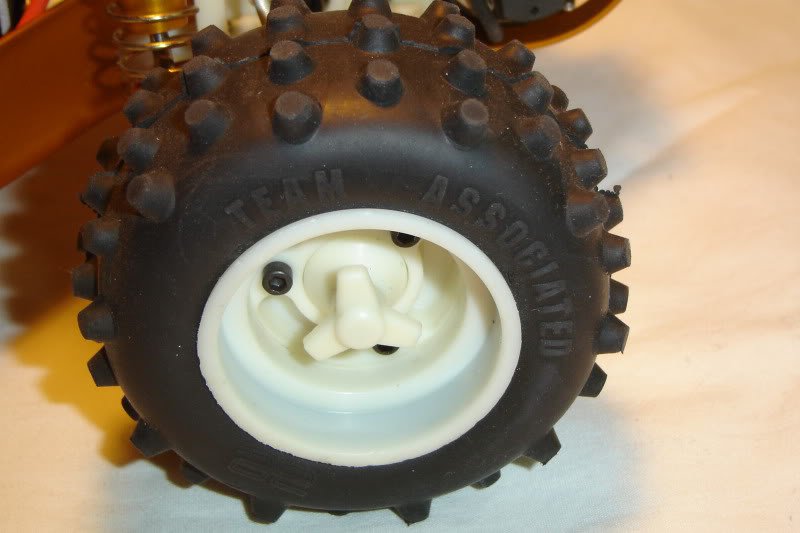 1989 - RC10 Graphite
1990 - RC10 Championship Edition
1990 - RC10 Team Car
Tires: Lower-profile Champion knobbies, now for a 2.0-inch wheel
The next three versions of the car included a similar knobby-style “Champion” tread, though they were molded to accept a 2.0-inch wheel by shortening the sidewall - the lower-profile tire provided a cornering advantage. 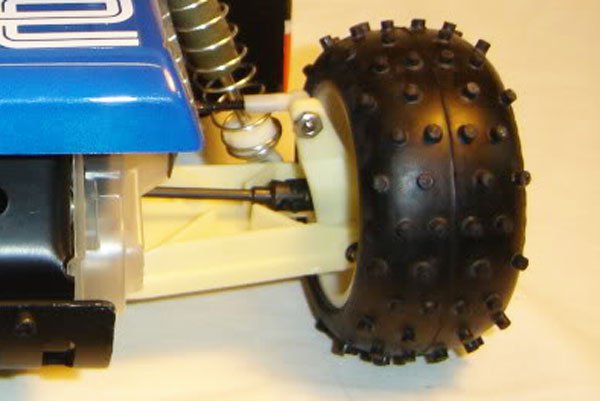 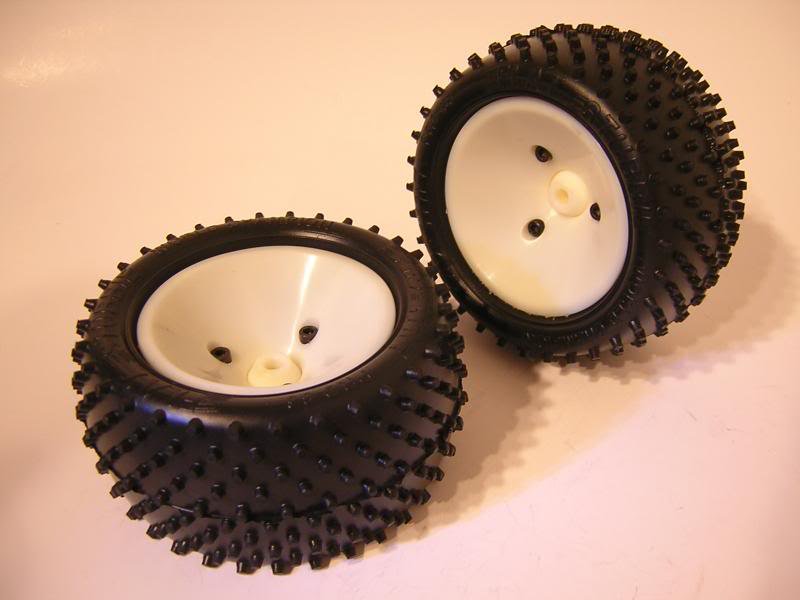 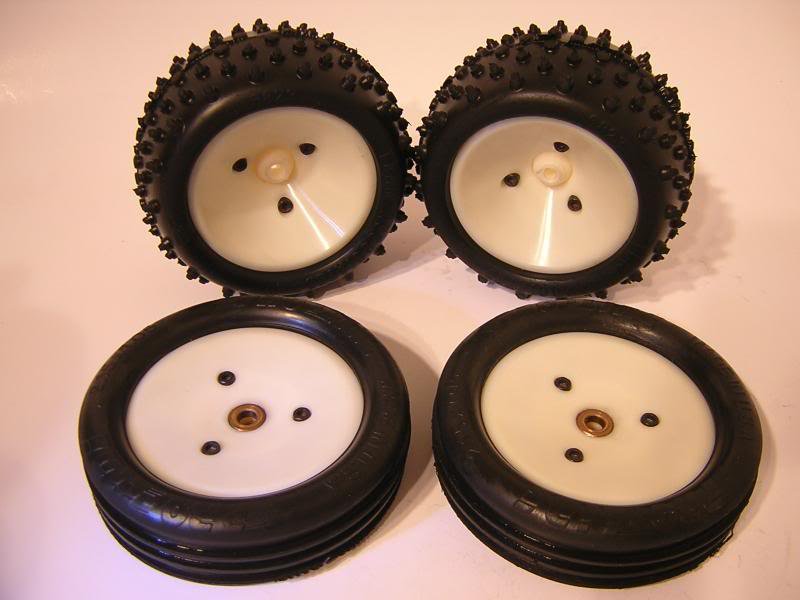 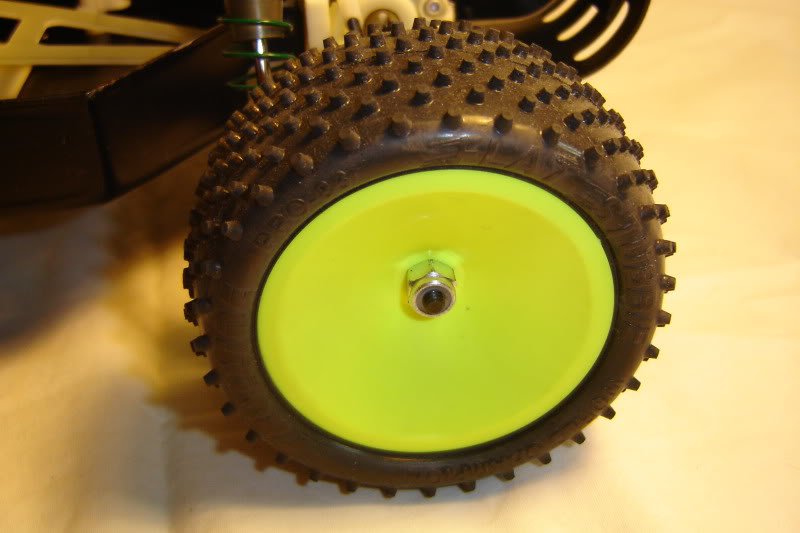 1995 - RC10B2 (and RC10B2 Sport)
Tires: The RC10B2 included XTR-compound Flat Stubbies, while the B2 Sport included harder-compound XTM Step Pins
The Flat Stubbies were used again for the new RC10B2, which was the first RC10 to use a molded plastic chassis. A lower-cost version of the RC10B2, which included bushings and other cost-saving measures, included a more basher-friendly tire - the Step Pin, molded from a harder XTM-compound rubber. 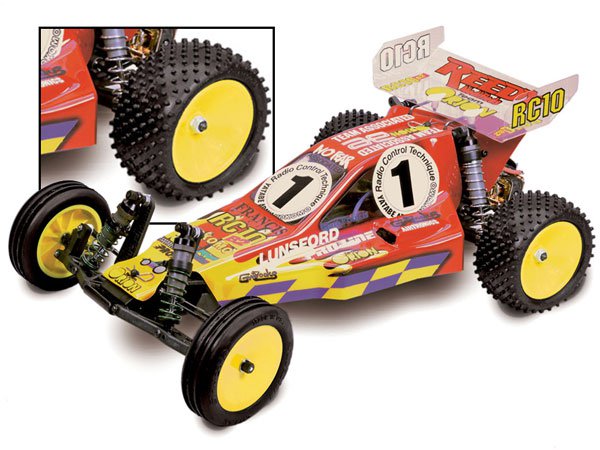 1997 - RC10B3
2000 - RC10B3 Factory Team
Tires: Though some of press photos of the Factory Team show the car with Pro-Line 2.2-inch Bow Ties (check out the second photo), both versions of the kit came with M2 compound 2.2-inch Holeshots.
The jump from Flat Stubbies to Holeshots was a big one - and the wheels had also grown slightly as well. By this time, swept outdoor tracks were the norm - and indoor tracks were trending toward hard-packed clay. M2 compound rubber, which had surged in popularity among racers over the previous couple of years, was significantly softer than the previous XTR compound as well, which netted a huge advantage. 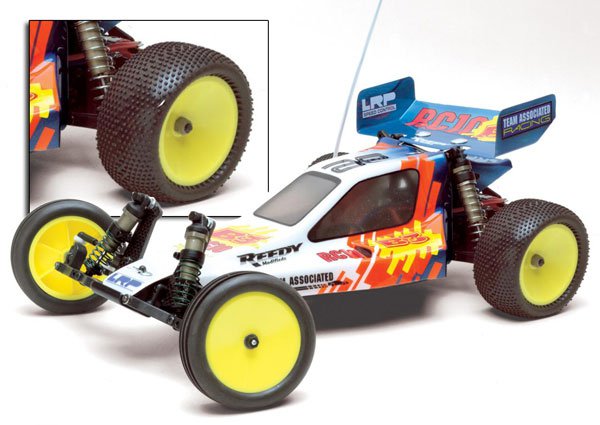 2003 - RC10B4
2006 - RC10B4 Race Spec RTR
Tires: Pro-Line 2.2-inch Holeshots in M3 compound.
Over a half-decade later, Team Associated again chose Holeshots for their new RC10B4 - though now, they were made of softer M3 rubber. They were even used on the RC10B4 Race Spec RTR, after the first-generation RTR suffered from hard, slippery stock tires. 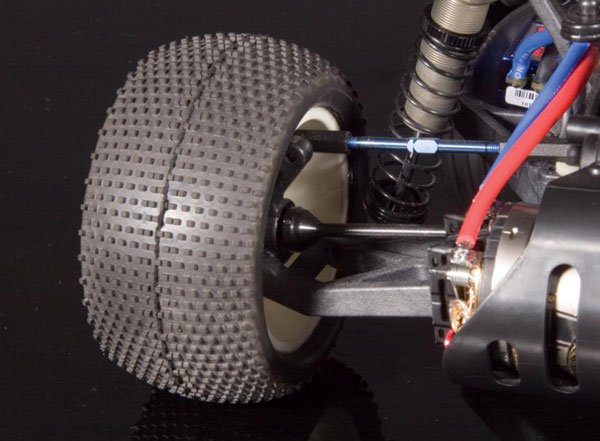 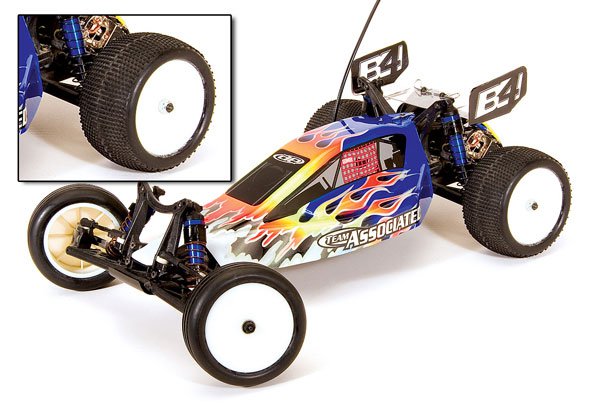 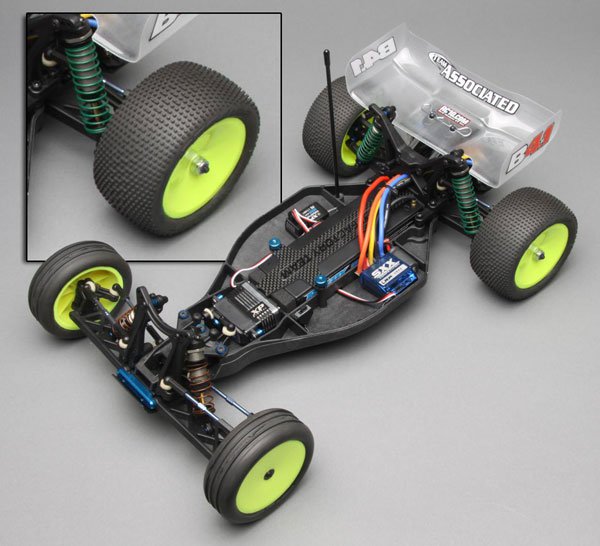 2013 - RC10B4.2 Factory Team
Tires: None
The B4.2 Factory Team was the first top-level Team Associated 2WD buggy not to include tires. The car used for press photos was equipped with Pro-Line Suburb rear tires. 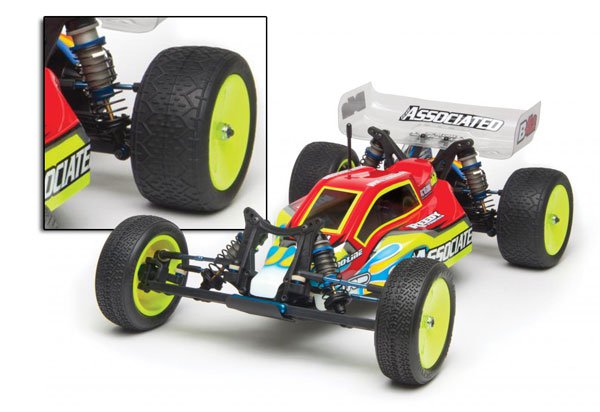 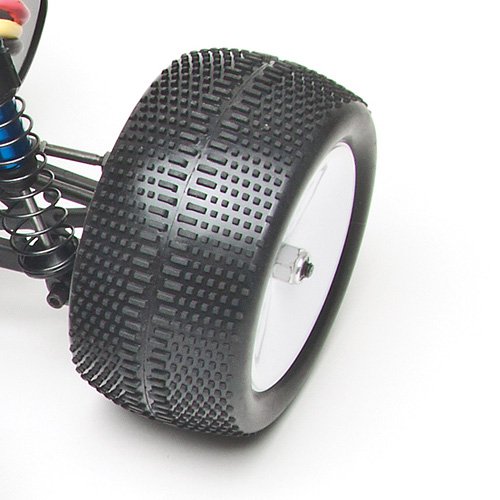 2013 - RC10B5 and B5M Team Kit
Tires: None
Like the final generation B4.2 FT, neither version of the new 5-Series buggies included tires. The press photos were snapped with the first version of the JConcepts Barcode tires, marking the first time a Team Associated 2WD buggy was pictured without a Pro-Line or in-house RTR tire.

2015 - RC10B5M Factory Lite
Tires: None
Like the Team Kits, the B5MFL does not include tires. The press photos are shown with JConcepts Dirt Webs. 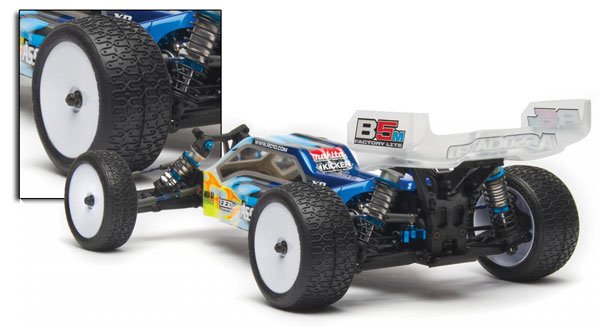 When jumping from the original 1984 Champion tire tread to the 2015 JConcepts Dirt Web, there’s an incredible difference in the tires included with Team Associated’s 2WD buggies. When viewed step-by-step, though, these photos show a gradual change from loamy dirt to packed surfaces, as the cars got faster and better equipped to handle more horsepower.
Special thanks to www.rc10talk.com and Team Associated for the photos.
Flashback Friday
Share:
blog comments powered by Disqus