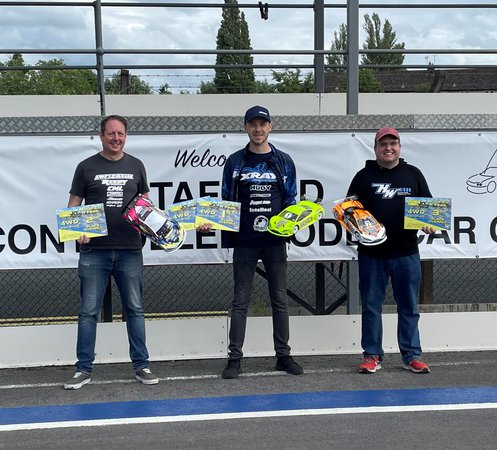 Team XRAY UK headed to Stafford RC track this weekend for round 3 of the BRCA 1/10th TC Nationals.

The team were greeted by mixed conditions for the race which made for some interesting racing throughout the day.

In 13.5 Stock Team XRAY’s Zak Finlay was able to take the overall TQ during qualifying. Zak was joined in the A-final by Chris Gunter and Matthew Lax, who were also running XRAY X4’s.

After the three-leg final, Zak was able to secure the overall win by taking first place in both the first and second leg.
Chris Gunter was able to top off a solid set of results, by taking the win in the last final leg, to take 2ndoverall.

In modified Kyle Branson was able to show great pace all day with his XRAY X4, taking the overall TQ.
Harley Eldridge lined up 5th for the A-Final after some close qualification runs.

In the mains, Kyle was able to convert his TQ to the overall win, whilst Harley would finish in 5th place.

The team move onwards to the next round of the championship, which returns to the Mendip Raceway track later this month.