A MOMENT WITH MIKE: Passing On the R/C Addiction 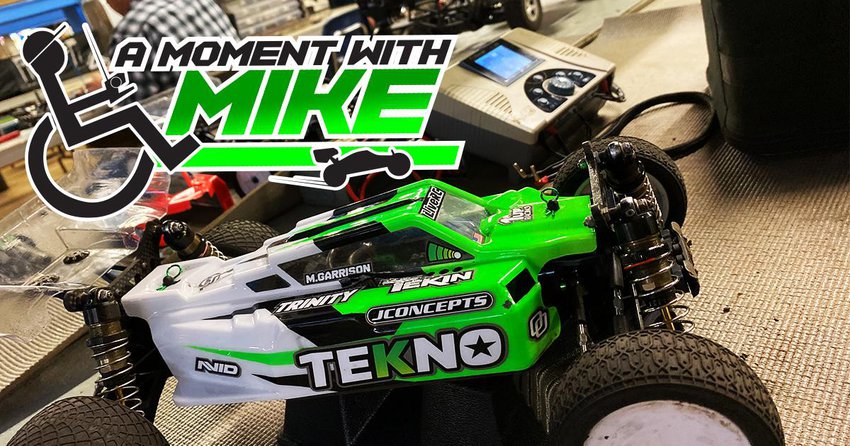 This past weekend there were races happening all around me ranging from dirt off-road to carpet oval and everything in between. Despite the number of races, I did not go racing. Instead, I did something very, very, very bad – I watched the R/C addiction take over not one, not two, not three, but four different people in a matter of hours, and I did nothing to stop it. One of them being only three years old.

What started as an innocent day practicing at our local track, turned very quickly after my wife and I invited her brother and his family to come join us (none of which have ever raced R/C cars). In addition, I called up an old friend who stepped away from R/C 6+ years ago, but recently bought a used buggy in case he ever got the urge to go racing again.

The first one to be struck with the R/C addiction was my brother-in-law. It took exactly 3 minutes and 22 seconds of watching us all driving around the track before he vanished to the hobby shop counter and was buying his own Traxxas Slash, charger, LiPo battery, etc. Before he had even unboxed the truck, he was already scheming what sort of cool stuff he could do it, what body he wanted to buy for it, what brushless system would be good for drag racing it, and so on.

Next was his wife. After watching him drive their new Traxxas Slash, she wanted a turn. She drove it non-stop until the battery was dead, and the two of them quickly began formulating a plan to make sure they both had vehicles so they could be driving at the same time.

The third to be caught up was my old friend who hadn’t seen the R/C track in years. With a little help getting his buggy setup, he hit the track and it all came back to him in the blink of an eye. His face lit up with a smile, and he was once again hooked.

Last, but certainly not least, was my 3-year old niece. She drove her dad’s Traxxas Slash, she drove Aunt Britani’s buggy, but she wasn’t truly in love with R/C cars until her Uncle Mike went out to practice. This is when she learned what “turn marshalling” is, and that anytime I was behind the wheel, she was going to have the opportunity to run back and forth across the track flipping my car back over one crash after another. My crashing became so common, that she began laughing hysterically and informing me I wasn’t doing it right by yelling up, “No Mike, DON’T crash!”

By the end of the day we had spent almost 7 hours practicing, but with the amount of fun we were all having it felt like a matter of minutes. Just as we were packing up, I made one final mistake. I charged up my wife and I’s buggies and handed the radio over to everyone to try them out.

With that being said, if anyone has one or more Tekno RC EB410 4wd buggies and/or Team Associated B6.1 2wd buggies with ESC, motor, servo, and battery included that they are looking to sell – I believe that I may have several newly R/C addicted buyers that are interested…