A MOMENT WITH MIKE: Time to change the kids behavior in R/C 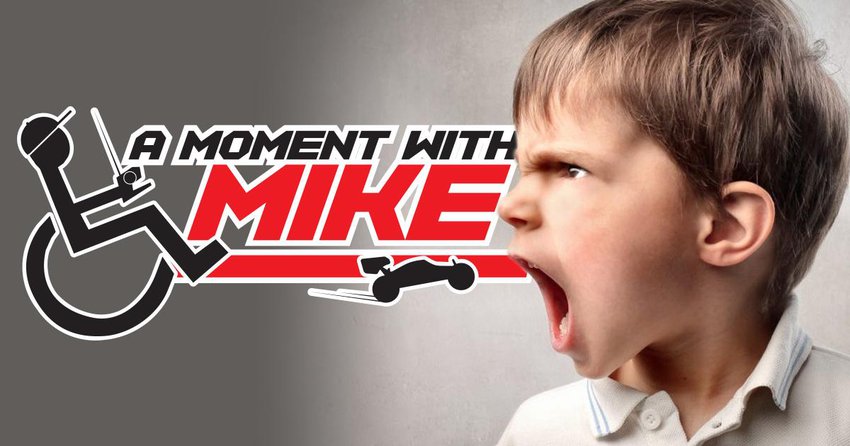 A good friend of mine shared with me a video this week from a regional trophy race that took place recently. Unfortunately, the video wasn’t of someone making a cool pass, doing a big whip, or performing a front flip mid-race. The video was a young racer who made a mistake on the last lap while leading his main event, lost the lead, and in a fit of anger yelled, and threw his radio from the drivers stand down onto the race track – shattering it into multiple pieces.

It’s time something be done about this behavior, especially from our young racers. This is definitely not the first young racer that I’ve seen spike a radio, cuss out adults on the drivers stand, have a fit and launch their car off the track into spectators out of anger, cut in line out of disrespect, and so on.

Before I go any further, I want to make it clear - I understand that this behavior is also an issue with adult racers, however, today my focus is primarily on this hobby’s youth.

Over the past 4-5 years I have seen the behavior, attitude, and racing etiquette of more and more young racers progressively getting worse and worse. Why is this? In my opinion there are multiple reasons, all of which need to be addressed.

#1 – Pee-Wee Parents
R/C car racing is a hobby, and is meant to be fun. At almost every race I attend I see at least one parent pushing their kid so hard, yelling at them while racing, or scolding them in the pits after a run because they aren’t performing “up to expectations”. This has been a problem for years in other youth sports, however, it seems to be getting worse in R/C now more than ever. If you are a parent it is okay to guide your kid, provide positive feedback and advice, and to want the best for them, but by pushing them to the limit and getting mad when they “do something dumb and crash” or don’t win, you are simply ruining the hobby for your kid. Chill out, and let them have fun.

#2 – Lack of Discipline
Discipline is another major issue I see at races around the country. This includes discipline from parents, race directors, track owners, and sanctioning bodies. When a child (or adult) acts out of anger and launches their car off the track, spikes a radio on the drivers stand or track, cusses, screams, and has a fit on the drivers stand, etc., there needs to be discipline. I constantly see parents coddle their young racers after these explosive outbursts by telling them it is “okay”. I see race directors and track owners turn their head as though nothing happened. I see sanctioning bodies “threaten” to discipline, yet never follow through.

99% of kids won’t cut in line at school, cuss out their teacher, or slam their books on the ground in the middle of class - because they will be disciplined. Yet the same kids will be the first to cut in a long line of adults waiting to practice, cuss out others on the drivers stand, or slam a radio on the ground in the middle of a race at the R/C track…why? A lack of discipline.

If there is no discipline for racers (young or old), why should we expect the behavior of our racers to ever improve?

#3 – Sponsorships
Sponsorships are great way to help parents fund their kid’s racing efforts, however, too often with sponsorship comes unnecessary pressure and expectations. The blame is not on the sponsors, the blame is on the racers and parents. As I have said in previous articles about sponsorship, becoming sponsored often takes the fun atmosphere and attitude of R/C and replaces it with a cutthroat and high-pressure stress mentality. Sponsorships are important and something to be proud of, but don’t let them ruin the fun of the hobby for you or your kid.

#4 – Personal Responsibility
There comes a point that no matter how young or old a racer may be, there are no more reasons or excuses to blame for the poor behavior at the R/C track. If a kid (or adult) is old enough to control an R/C car around the race track, they are old enough to know the basics of “right and wrong”. We all slip up, we all get hot headed, but for racers that this type of behavior is an issue time and time again – its time take some personal responsibility and clean up your act. It’s not fair to the other racers, the spectators, the families, and the hobby in general for you to act like a three-year-old (whether you are or not) because your race didn’t go as planned.

There is a long list of other reasons that probably add fuel to the fire for bad behavior at the R/C track, but these are just a few that came to mind. As someone who loves this hobby and the world of R/C racing, I cannot stand to see the next generation of racers losing sight of the fun and happiness in R/C with these explosive outbursts at such a young age.

Racers of all ages - be proud of who you are, the image that you are portraying, and work on spending more time enjoying R/C than you do getting mad about it.