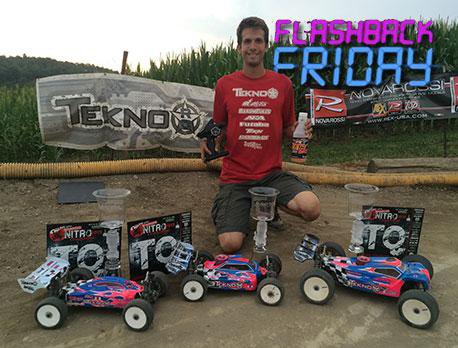 Everybody knows that Friday is meant for reminiscing old times. Each week we take you back in time as we flashback to some of R/C racing's greatest moments, products, drivers, and more!
Flashback: 2015
Ryan Lutz dominated the Big Apple Novarossi Challenge
Last year, Tekno RC's Ryan Lutz earned TQ honors in Nitro Buggy, Nitro Truck and Electric Buggy at the Big Apple Novarossi Challenge hosted by Barnstormers RC Raceway in Chester, New York - and then won all three main events. Here's his blog post from the event:
This past weekend I made my second trip to New York in the past two months. The destination was once again Barnstormers in Chester for the Novarossi challenge. Now I really enjoy these ‘named’ races, especially when they aren’t one of my current sponsors. I put a personal goal on myself to win these events with the products that I support. The weather for the event couldn’t have been much better. Mid to low 80s and relatively low humidity. Absolutely beautiful for the end of July. I brought 3 classes to keep me busy by myself on this trip.

Fun Looking layout
Qualifying started out with the talk of doing 4 rounds but as the day wore on we realized there was really only time for 3. So it was qual points with best 2 of 3 to count. E-buggy was first out of the gate and early on it was my fastest vehicle. They had track minimum lap time set at 32 seconds and during my run I went from first and suddenly fell way back. It was missing my laps as I was going under the lap time cutoff. After the race it was corrected though and in subsequent qualifiers I got down to a 31.4 fast lap and would TQ every round.
Next was the Nitro classes and it was a bit more eventful with these. In Truggy Q1 I had a good run, breaking into the 10 lap range and was the only one to do so. They still hadn’t fixed the computer at this time so nearly every other lap wasn’t counting as I kept dipping into the 31’s. In Q2 I had some traffic and crash issues on the first and last laps and would just miss out on TQ. So it came down to Q3 between Drake and I. I switched from SS Impacts to regular soft impacts for Q3 and I couldn’t believe the difference. My truck was amazingly dialed and a few laps in they said I had a 30.4 fast lap and was averaging a 31.1. I ended the run with every lap under a 32 and would TQ by a healthy margin. 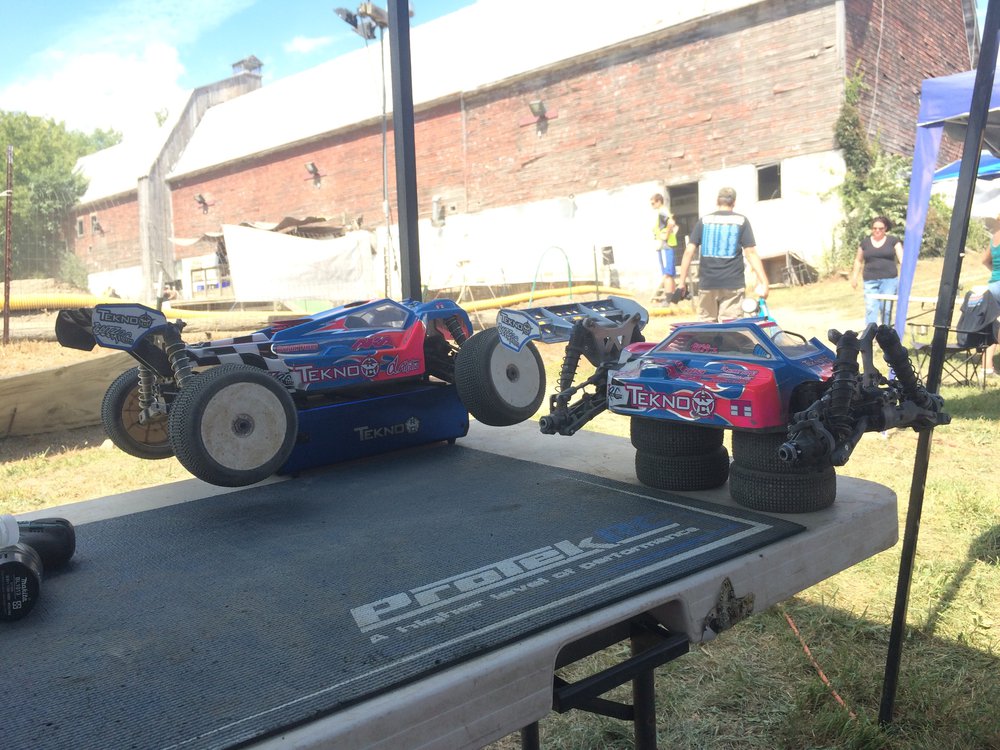 Racing at the Barn
In Nitro buggy Q1 wasn’t quite as hoped as during practice I was testing with head shims and I had changed it back before Q1. I forgot however to tighten the glow plug and so 4 minutes in I stalled out as it turns out the engine really does need a glow plug to function properly. Who knew?!?! Anyways came back swinging in Q2 to put myself in position to come back in Q3. It was a battle for most of Q3 between Alex K and myself. I was able to hold the lead though and even with a crash on the second to last lap I would come away with the TQ by 2 seconds. This gave me the hat trick of TQs and a great start to the weekend. 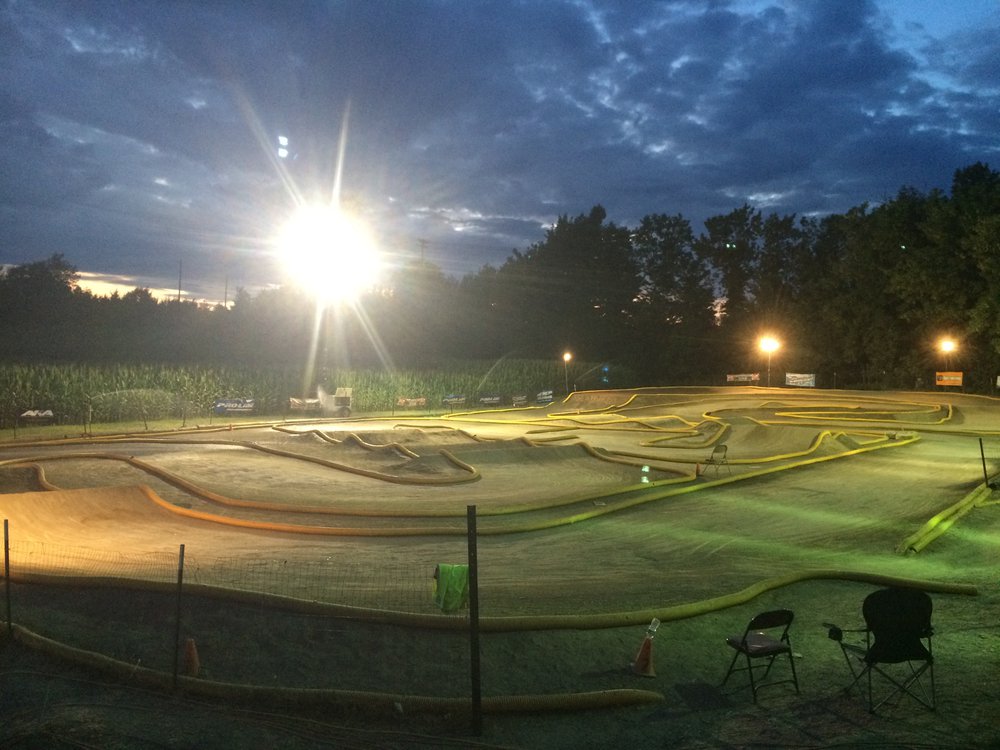 Looking good under the lights!
Sunday Sunday Sunday, it was main day and there was rain and thunderstorms all around us. But we seemed to have a protective bubble around us protecting us from the weather. It kept it nice and cloudy most of the day which was enjoyable as well. My day really got started with race 12 and I would race marshall race the entire rest of the day through race 22. So needless to say there was a lot of standing and focusing. A1 of Ebuggy started things off and at the start things looked good as I pulled away to a nice lead. But about 4 minutes in I broke an Ackerman plate and that was that. In Q2 which was up literally 30 minutes after Q1 I had a tough start but fought back and into the lead to take the win. Q3 was the decider and it was made interesting. I led out the first half lap until I dorked the triple and the marshal had to let every other car go buy before he could get me. So I was dead last, and as I fought through traffic that first lap I had some more horrific crashes over jumps with others and I just am so thankful for Tekno durability. I worked my way up to 3rd and a few more minutes into 2nd. Anthony was in the lead and running clean. But I finally started to put in some clean laps on this challenging track layout. I caught and passed the leader and pulled away to a comfortable victory to take the overall win.
Nitro truggy was next and my goal was to lap the field a couple time honestly. My truck was just that good and I knew if I did my part that I would be able to do that. From the start my truck continued to feel as good as it had, and I pulled away from the pack. It took about 8 minutes to get my first lap on the field but I kept pushing hard. I can’t say enough good things about the Tekno NT48 and I just did my best to do it justice. I would end up with just over a 3 lap victory margin dipping down to a 30.9 on this ever more challenging track layout.
Last was the Nitro buggy race and it was the best race to watch from a spectators standpoint. The first 20 minutes or so was a close 3 way battle between Alex K, Kyle R, and myself. For a good chunk of that after the first pit stop I found myself in 3rd but I just focused on running clean laps as I figured the youngsters might get tired during a 45 min main, because they were blistering fast to start the run. Well Kyle had his battery fall out resulting in an unfortunate runaway. A few minutes later Alex’s front tires started to get a bald strip down the center and I would close the gap and take the lead on his mistakes half way through the main. My AKA soft impacts holding up very well to the surface which looked like a gravel concrete in the groove. I then just drove a clean remainder of the race getting a lap + on the field to being home another victory and finish the perfect race weekend. 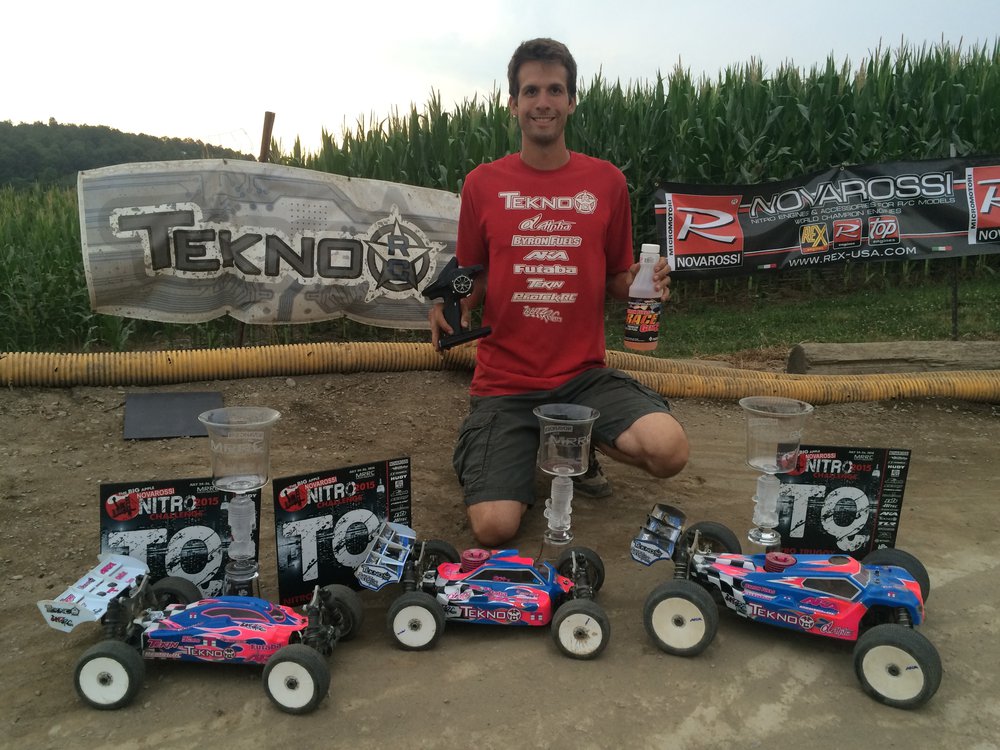 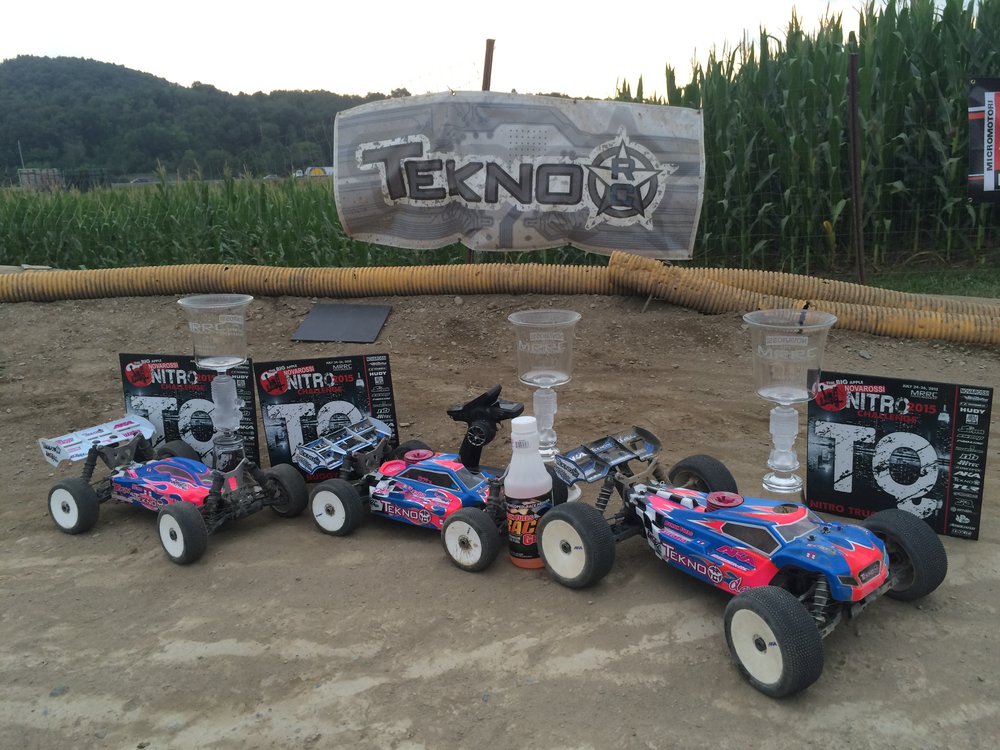