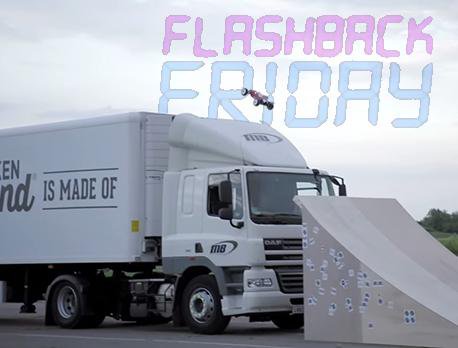 Everybody knows that Friday is meant for reminiscing old times. Each week we take you back in time as we flashback to some of R/C racing's greatest moments, products, drivers, and more!
Flashback: 2014
Lee Martin jumps two semi trucks with a McDonalds chicken sandwich on-board

One year ago, McDonalds in the United Kingdom posted a video to YouTube showing a 1/8-scale truck jumping over two semi trucks with trailers. The RC vehicle was fitted with a plastic container holding a chicken sandwich (a "Magnificent Chicken Legend with Spicy Tomato Salsa," which is only available to the Brits), providing at least some sort of relevancy for the fast food giant.

The driver of the truck was Lee Martin, a multi-time European champion who's among the fastest nitro and electric off-road racers in the world. One year after the big jump, I asked Lee what it was like to be involved in the big production.

Aaron Waldron: How did you get involved with the stunt?
Lee Martin: The production company got in touch with Radio Control Car Racer magazine here in the UK and expressed their interest in doing this video. Matt (Benfield, Editor of RC Car Racer) and I had done some filming stuff in the past together, and he put my name forward. From there I worked with the production company and helped them along the whole journey.

AW: What kind of input did you have on the jump? Did you build and drive the truck? Who designed the ramp?
LM: I had quite a lot of input from the type of car we used, its capabilities, and the equipment that would make it possible. I provided them with background information and helped to provide them with the best products I knew that would do the job.

The ramp was thought out between myself and Lewis Embling; he was then contracted to build the ramps as he works in timber buildings and has great experience in wood work. (Yes, he likes playing with wood.)

Lewis’ son, Jack, started the build of the truck due to my time restraints, but I finished it off and made sure it worked and had a lot of power! We used a Mugen MBX-7T with a Hacker system (2100kv) and powered it up with Hacker batteries at 22.2v... She was fast! Thanks to the guys at Mugen Europe and Hacker for the information and support.

I was then the driver, having to not only do the jump, but sit in a camera car and drive along side it while filming some action shots at speeds in excess of 60mph. A couple of times I thought we might just run over the poor Mugen!

AW: How many attempts did you make?
LM: We probably had around ten goes at it. We knew that jumping one truck would be easy, but they really wanted two. So, firstly, we hit the ramp at full speed into an open field to see how far we could go and were quite excited to see that, after jumping 35 meters, jumping two trucks was possible. From that point we went for it! We made the jump probably 4-5 times, a couple of times the truck actually went through the down ramp - I must admit, the truck was strong! We broke some parts, obviously, but nothing major. One time I was in full flight and the wind took it off course and landed to the left of the truck and to flat. I drove it right back and had another go!

AW: Did the chicken sandwich actually stay put during the jump?
LM: The box did.

AW: Do you now get free McDonalds?
LM: You know what; it was a long day, and on the drive drove home that night we actually purchased Chicken Legends (who said advertising doesn't work). Not even a free voucher. The food served on the day wasn't even McDonald's.