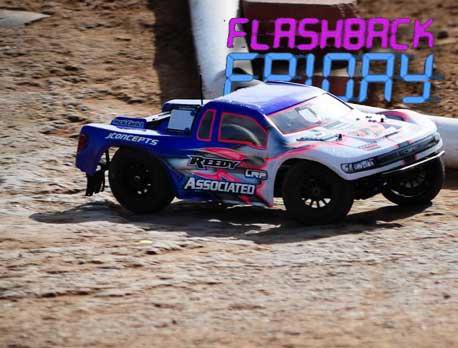 Everybody knows that Friday is meant for reminiscing old times. Each week we take you back in time as we flashback to some of R/C racing's greatest moments, products, drivers, and more!
Flashback: 2011
Three wins for Maifield at Cactus Classic
Seven years ago today, the 25th annual Cactus Classic kicked off with the first day of practice - and Ryan Maifield, then racing for Team Associated, won the 2WD and 4WD classes as well as the 2WD Short Course division on the sun-baked blue groove at Scottsdale RC Speedway. 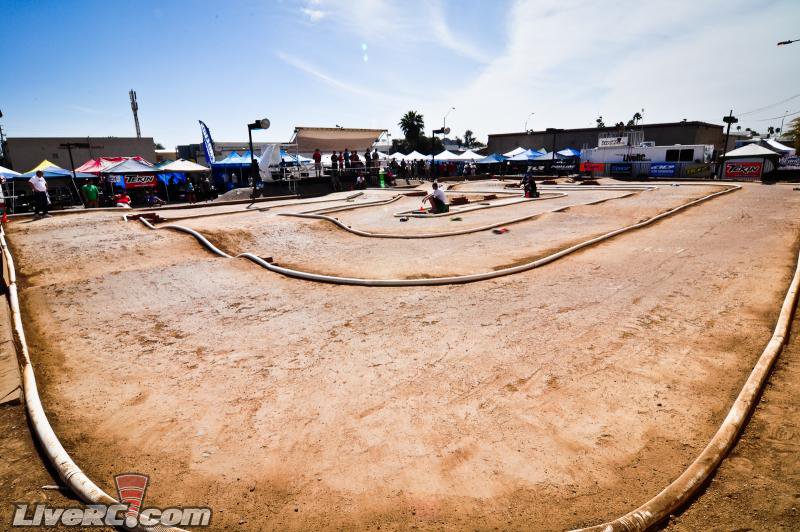 It might have only been spring break, but it was hot. Really hot. 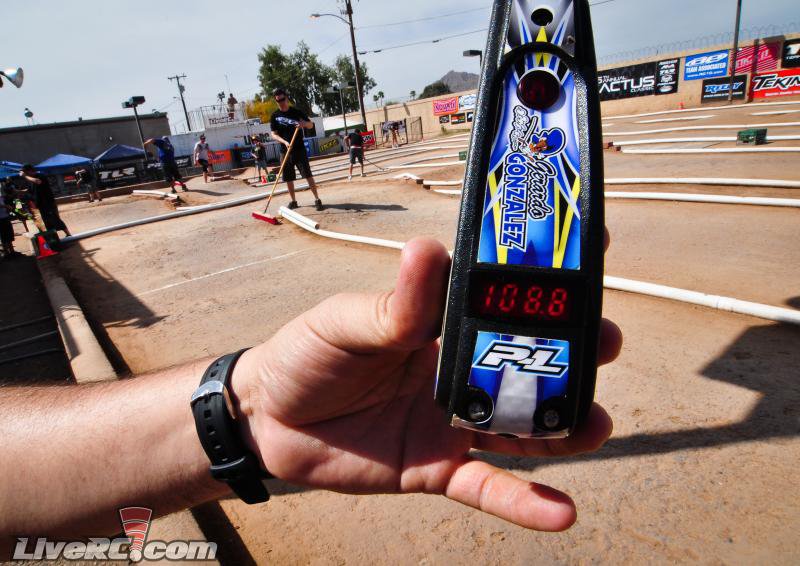 The layout itself was more of a traditional electric off-road course, with technical switchbacks, tight 180-degree hairpins and high-speed sweepers punctuated by difficult jump sections. 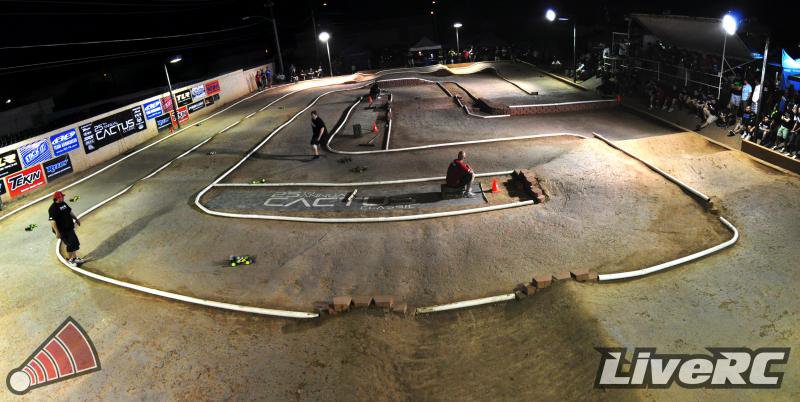 With 2011 being a Worlds year, the Cactus Classic drew a big international crowd: European drivers like Jörn Neumann, Marc Rheinard and Hupo Hönigl; and Japanese drivers such as Naoto Matsukura and Kohta Akimoto were in attendance. 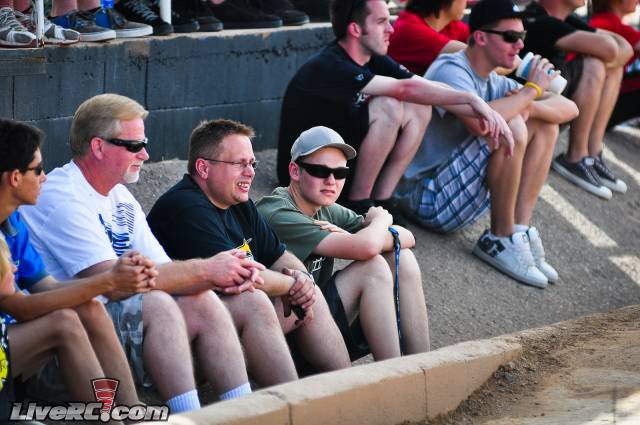 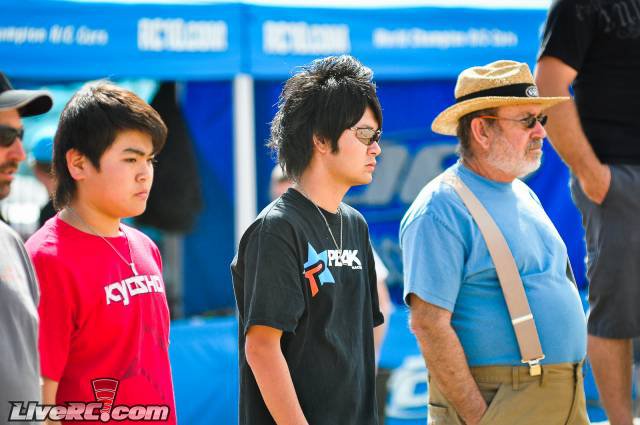 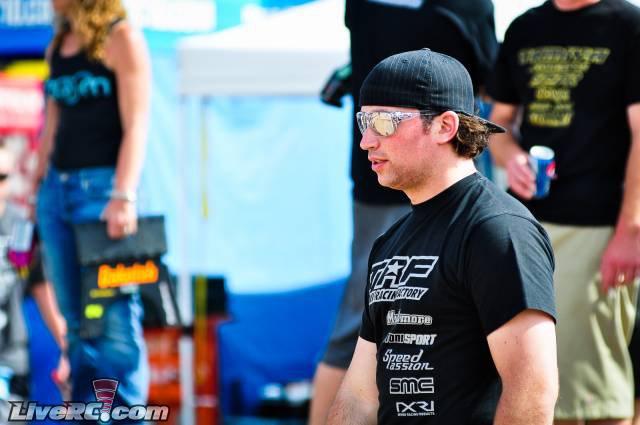 The AKA Rebar tire and red foam insert made its public debut in the hands of the company’s top drivers, like Jared Tebo. Here’s a shot of Mark Pavidis’ Kyosho buggy testing out the new treads.

It was also the first time LiveRC founder Brandon Rohde met Mike Garrison who, after filling in for occasional LiveRC co-anchor Richard Lake as the track PA announcer for a handful of races throughout the weekend, agreed to become the site’s full-time news editor. As for Lake, he finished behind British racer Tony Truman - our LiveRC co-anchor for the 2015 IFMAR Worlds — in the Stock Short Course class. 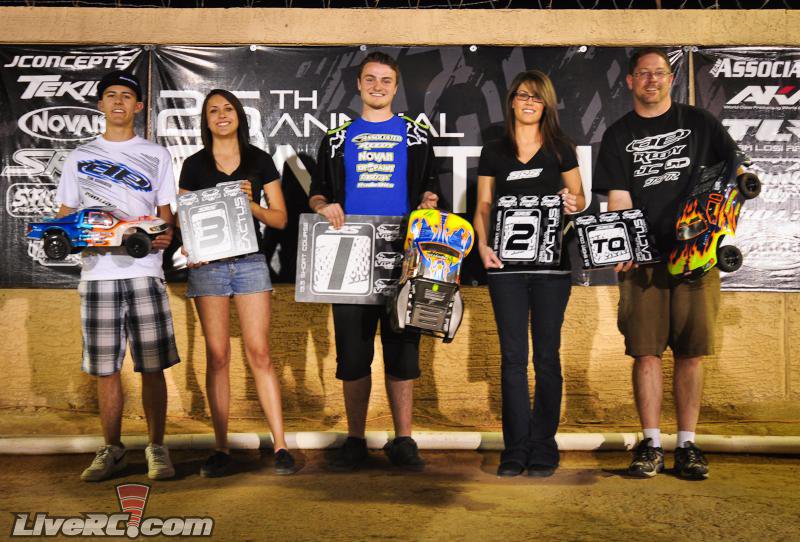 On the racetrack, though, Maifield was in control all weekend long. His momentum started in the first round of qualifying on Friday morning when he set the fastest time in 2WD and 4WD, along with 2WD short course, while Jared Tebo was quickest of just 14 drivers in Stadium Truck. The 4x4 short course class was also a big deal in 2011, with top drivers from Team Losi Racing and Team Durango competing against a prototype SC10 4x4; electronics issues plagued Maifield in the first round, and Mike Truhe drove his TLR truck to the fastest time. 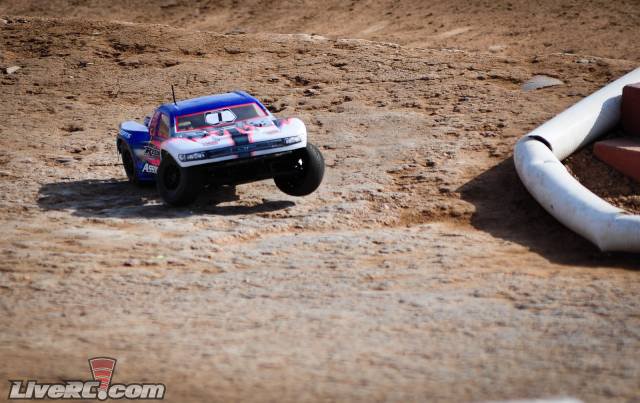 Maifield was again fastest in the 2WD buggy and 2WD short course classes in the second round, while Ryan Cavalieri ended the first day of racing with the best time in 4WD buggy. Then-14-year-old TLR star Dakotah Phend set the fastest time in Stadium Truck, and Truhe again edged out Maifield in 4x4 short course. 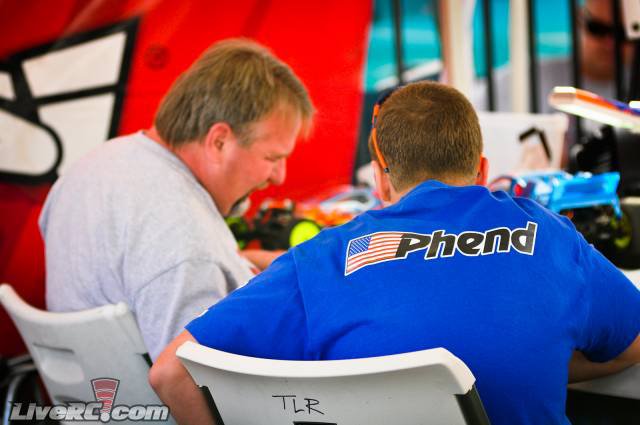 Racers were greeted by milder temperatures on Saturday morning as the third round of qualifying began, but Maifield stayed red-hot in the 2WD short course class to lock up the overall TQ honors and set the fastest time in 4x4 short course as well. Truhe broke Maifield’s streak in 2WD as he drove off with the best run, while Ryan Cavalieri clicked off the top time in 4WD buggy as well as Stadium Truck. 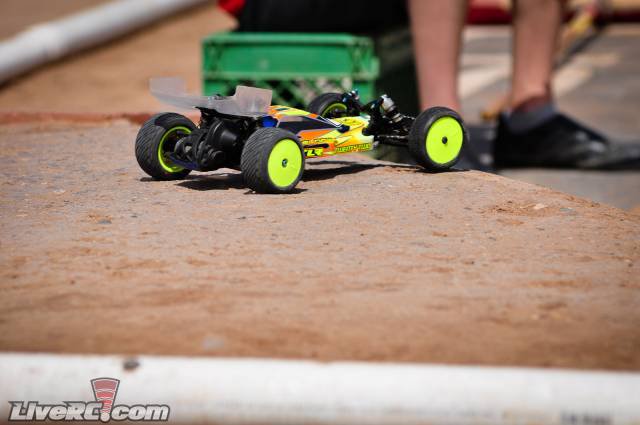 Jared Tebo drove what was then a prototype 2WD short course truck built upon the RB6 platform to the best time in round four, and Maifield again topped the charts in 4x4 short course with a time fast enough to edge TLR’s Truhe on a tiebreaker for the front row on the grid. Tebo edged Cavalieri by just 0.015 seconds and then had his best run of the weekend up to that point to finish 2WD buggy qualifying on a high note. Finally, Maifield put on a late-race charge in 4WD buggy to end Day Two. 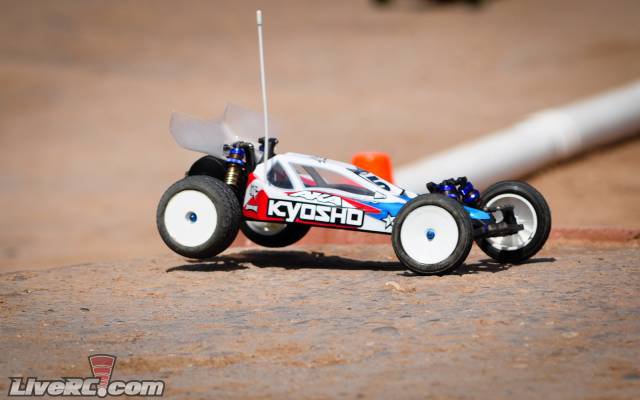 Once the qualifying points were totaled, Maifield was the Top Qualifier in 2WD and 4x4 short course, as well as 2WD and 4WD buggy. Tebo was the overall TQ in Stadium Truck. 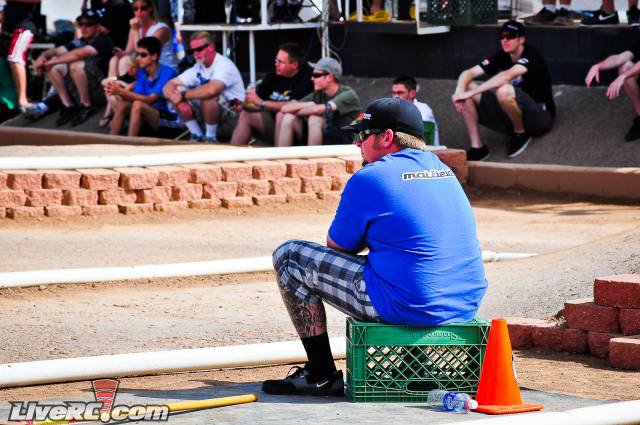 On Sunday morning, the drivers in the 4x4 short course class expressed concern about being able to complete the scheduled ten-minute single A-Main event — and so the organizers opted for two five-minute A-Mains instead. Truhe got around Maifield in the first few laps of A1 and held strong to take the win. 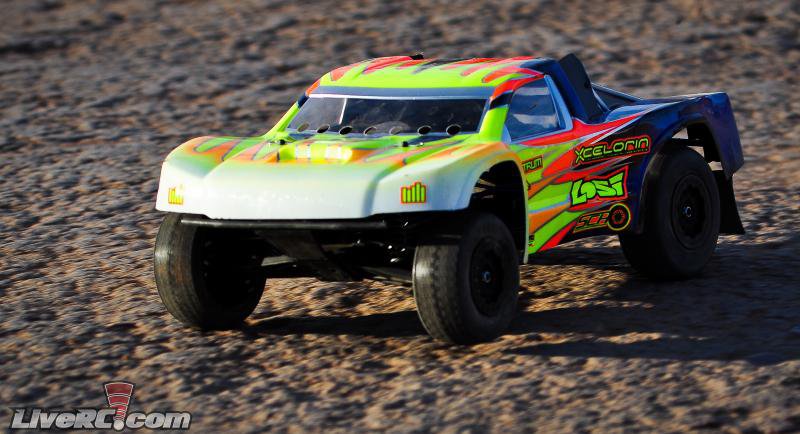 The second A-Main got off to a similar start, with a mistake by Maifield on lap five opening the door for Truhe and Durango’s Jörn Neumann to get by. Neumann executed a brilliant pass on Truhe in the closing stages of the race to take the win, but Truhe’s 1-2 finishes were good enough for the overall victory over Neumann and the German’s then-teammate, Hupo Hönigl. 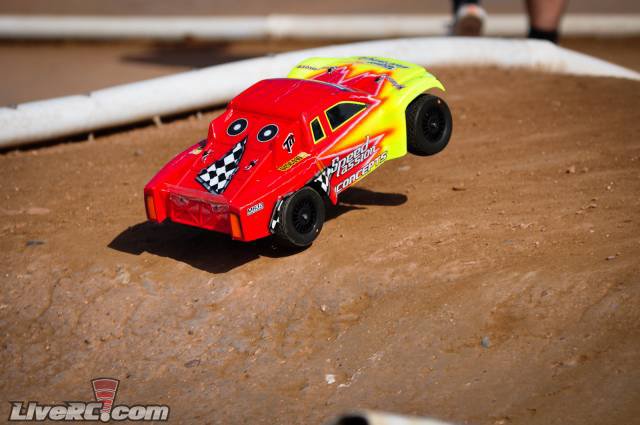 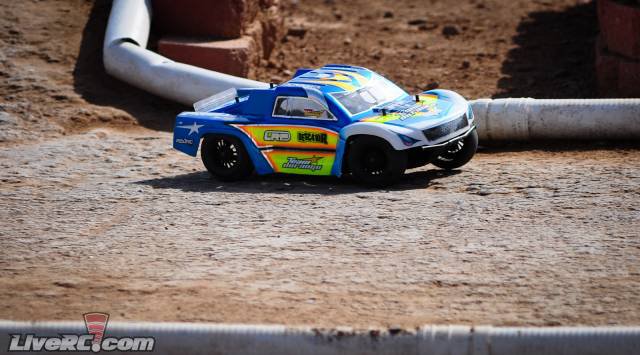 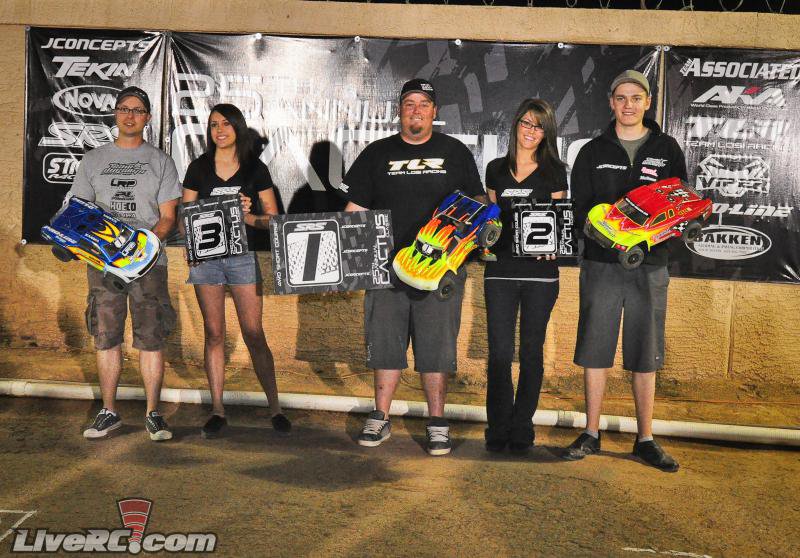 Tebo raced off to an easy win in A1 of the 2WD short course class, while TQ Maifield recovered for second by the end of the race ahead of Cavalieri. Maifield crashed on the first jump section of A2 and let Tebo and Cavalieri passed. Cavalieri passed Tebo one lap later for the lead. A few mistakes by Tebo gave Maifield the chance to move into second and close the gap to Cavalieri, then take the lead in the closing stages of the race and hold on for a 1.6-second victory. 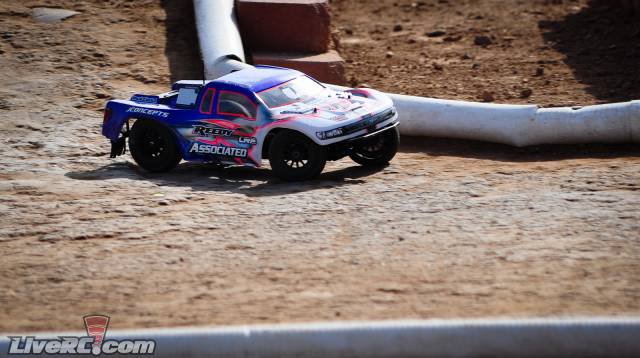 Maifield led A3 from start to finish, with Tebo finishing second and TLR’s Frank Root passing Cavalieri for third on the final lap. In the end, Maifield won the title with Tebo second and Cavalieri third. 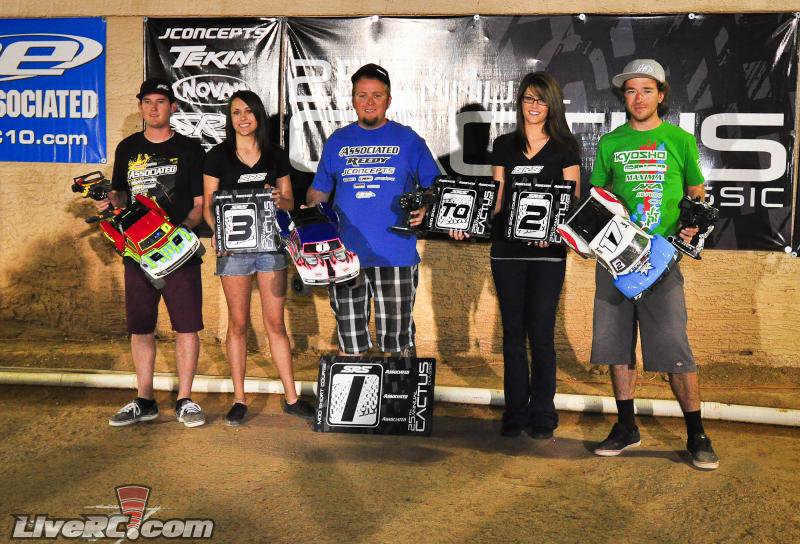 Tebo held off Cavalieri to lead all of A1 in the Stadium Truck main events, as the top two broke away from the rest of the field. Meanwhile, then-TLR driver Dustin Evans broke down and opened the door for Jason Jakubczyk to finish third. Dakotah Phend tagged along with Tebo and Cavalieri as they sped away from the rest of the field in A2, and followed Cavalieri past Tebo when the TQ made a mistake. Tebo worked his way back into second by the end of the race but couldn’t pass Cavalieri. Tebo made another bobble in the beginning of A3 and Cavalieri drove off for the win and class victory, while Jakubczyk again benefitted from a DNF by Evans to finish third in A3 and overall. 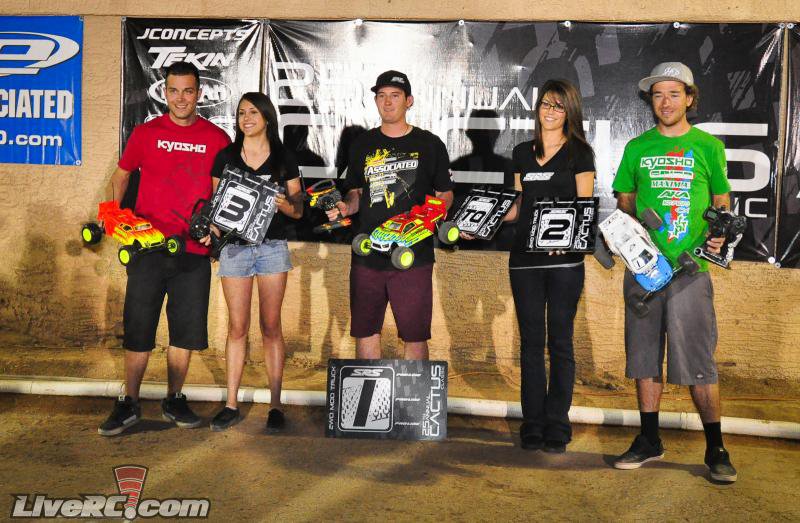 Phend wowed the crowd on lap three of 2WD A1 when he passed Tebo and Maifield for the lead. 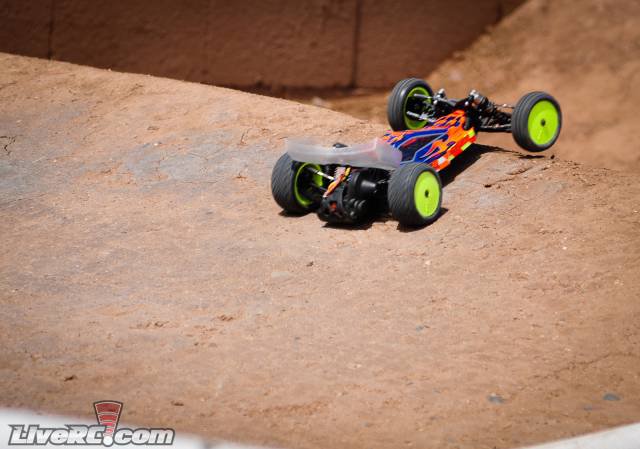 Two laps later, though, but Maifield passed him back over the triple. After a few mistakes by Tebo and Cavalieri, Evans drove into second with Cavalieri recovering for third. Maifield led A2 from start to finish to wrap up the championship despite heavy pressure from Tebo in the beginning. A late race charge from Cavalieri put him into the second spot — until Tebo got him back on the final lap. With Maifield sitting out A3, Tebo led from the start while Cavalieri worked his way through the field by passing Evans, Phend and Truhe before setting up Tebo for a last-corner pass and a 0.48-second victory. 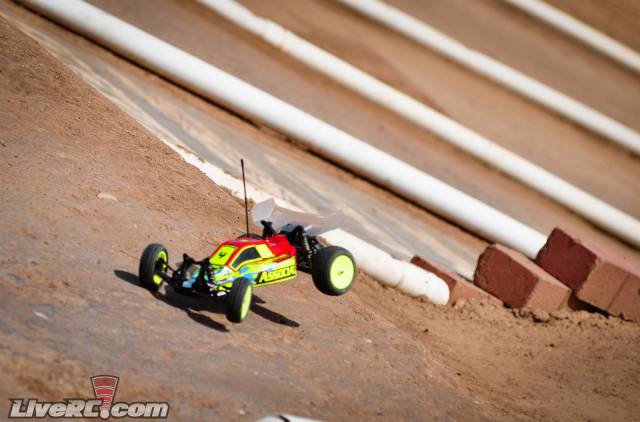 However, Tebo’s finishes were still good enough for second on the podium ahead of Cavalieri. 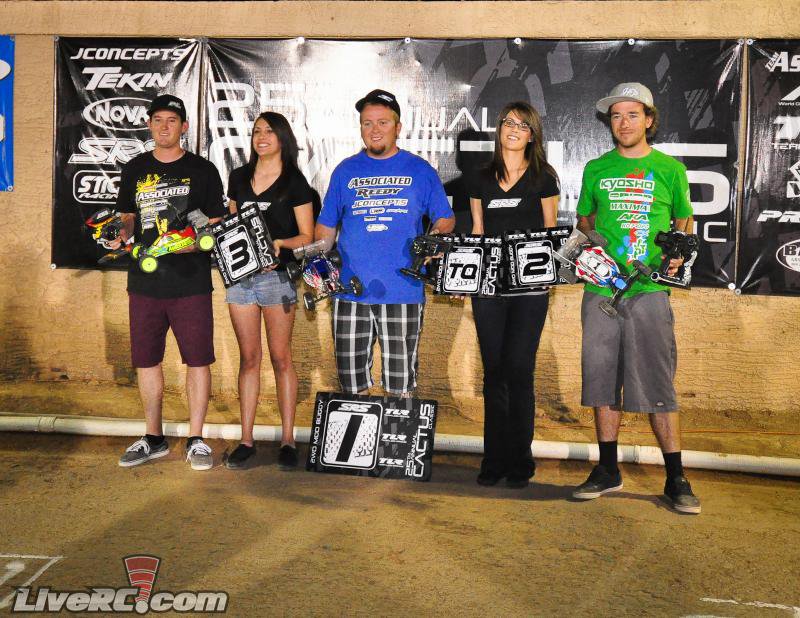 Maifield recovered from an early mistake to win A1 of 4WD by six seconds over Tebo and Cavalieri. The second main event was a similar affair for the Arizona native, who led tone-to-tone to wrap up the title, although this time it was then-Tamiya driver Lee Martin who edged Cavalieri for second. Tebo and Cavalieri traded the lead in Maifield’s absence in A3, until Tebo’s car broke and Cavalieri settled in for a comfortable win. Young Japanese driver Naoto Matsukura had his best run of the weekend to finish second ahead of Evans, but it was Ryan Cavalieri and Lee Martin who finished Maifield for the overall. 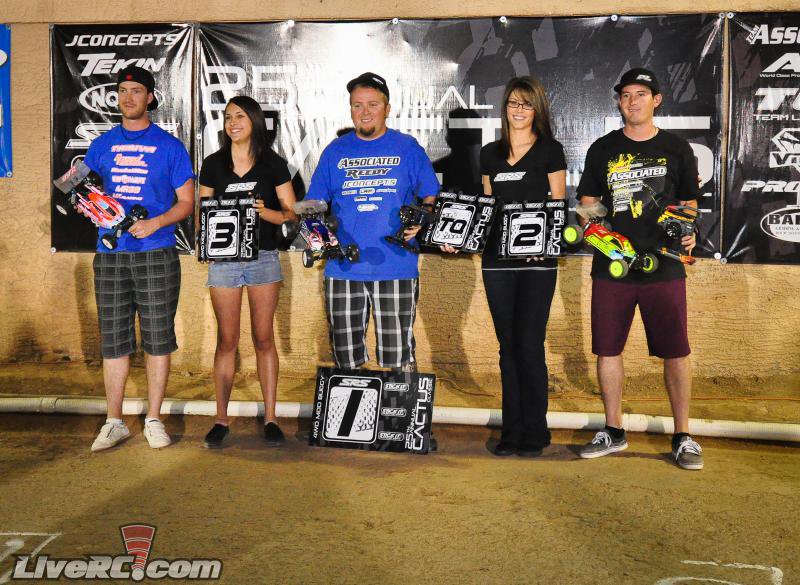 Here’s a highlight reel of LiveRC footage from the weekend, with some onboard footage from some very fast short course racers!
To view our photo gallery from the 2011 Cactus Classic, click here:
www.liverc.com/photos/albums/15-2011_Cactus_Classic/ 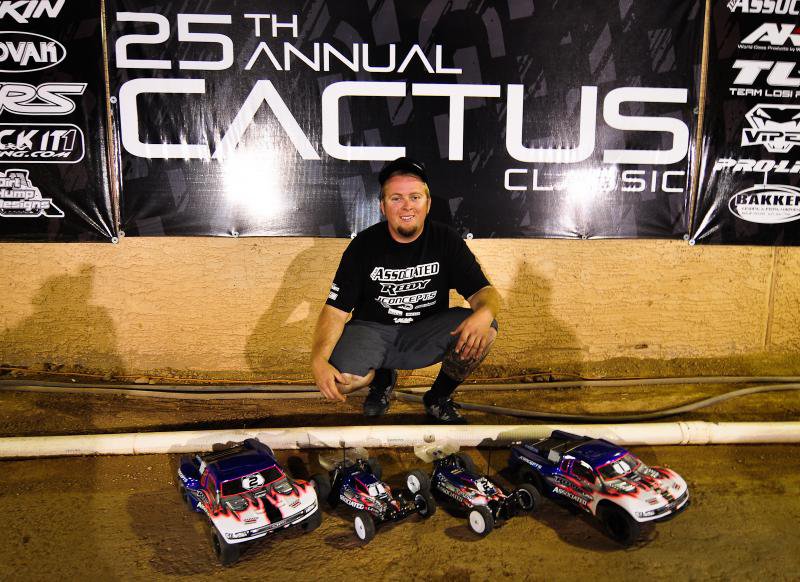