4/11/2013
By Mike Garrison
LiveRC.com
HRP Race Report:
www.hrpdealer.com
Intermountain RC Raceway In Magna Utah hosted the April Fools Classic this past weekend April 5th, 6th and 7th. With 29 heats and nearly 300 entries it was shaping up for a great weekend of racing! Racers from all over the west came out to challenge the locals from Idaho, Colorado, Wyoming, Arizona, Washington and California.

The race format used qualifying points over 4 rounds to get racers seated in the main events. Triple A-mains for the Pro classes of 2wd Mod Buggy, 4wd Mod Buggy and 2wd Mod Racing Truck. There was also a novice class, 17.5 stock and Open classes for 2wd buggy, 4wd buggy, racing truck, 2wd SC and 4wd SC with single Amains for those classes.

Practice on the newly installed layout started on Tuesday with many drivers showing up that early in the week to get acquainted with the track layout and surface. The indoor clay track is legendary for consistent traction and didn’t disappoint. Qualifying rounds Friday and Saturday were run smooth and the track grooved up to near “slicks” conditions. Proline clay compound Suburbs were the most common tires in the pits while others were running Jconcepts Barcodes in gold with good results. The layout included a great mix of obstacles with off camber turns and big air jumps. The double getting onto the straight was a deciding factor in many races. Get it right and pick up a few tenths every lap. Get it wrong and brace your self for a battle.

Towards the end of qualifying on Saturday night the Tekin guys from Idaho bought the whole track dinner! A mountain of Dominos pizzas were stacked in the pits and a well-organized line formed for everyone to grab a slice or two, it was great! Racers were very happy about this, as most were running so many classes they forgot to plan for dinner. Special thanks to Tekin!

The Open class format provided for some incredibly fast times in qualifying and great battles throughout the mains. Rather than running a prostock class with a motor limit as in the past, IR-CR has recently gone to an Open and Pro classes format. Similar to sportsman in Nitro, this has allowed local racers to build up their experience running full blown modified motors and work on their setups without having to worry about being run over by the “Pro” level guys. This format seemed to be well received and is definitely breeding faster drivers out of Utah.

TLR’s Joel Eaton would take the win in Open 2wd SC from the 2nd qualifying position with Scott Brown coming in second and Sam Ford in 3rd.

Team Associated’s John Walencita snagged the TQ in Pro Racing Truck ahead of TLR’s Corey Petersen starting from the 2nd position on the grid and Joel Eaton starting in 3rd. John would win the first main and Joel would win the second. Corey had a second place finish in the two first mains, so it would come down to the 3rd main of this class to decide the winner between the 3. Running TLR’s 22T in mid-motor configuration, perhaps as just an experiment, Joel Eaton would take the win in the 3rd main, just edging out Corey Peterson with tight racing between the two for the last few laps. John Walentia would round out the podium.

Team Associated’s Robbie Gillespie Jr. would get the TQ in the Pro 4wd Buggy class ahead of local fast guy Kobe Yonker. Robbie wrapped up this title after the first two mains uncontested. The 3rd main would decide the podium with Kobe edging out John Walentia for the 2nd place step and John earning 3rd overall.

Qualifying for the Pro buggy class was intense over the weekend, with TLR’s Joel Eaton taking the first two rounds and Robbie Gillespie taking the 3rd and 4th. With each driver tied for TQ the fastest runs were the tiebreaker. The track progressively got faster as the rounds when on, so AE’s Robbie G earned the pole position.

The first main started off with a pileup in the opening lap with most of the pack getting tangled near the finish line allowing Robbie and Joel to break away and run their own race. These two were within a car length the entire 6-minute race, with Joel putting a pass on Robbie after he got out of shape coming through the corner after the gap tabletop. Robbie got back in line behind Joel and put the pressure on, but to no avail, Eaton would come away with the A1 win.

A2 was a much cleaner start for the entire pack with Eaton making an early mistake allowing Corey Petersen to come to the second position and pressure Robbie for the win. Corey did make a late race pass for the lead, but Robbie was able to regain the lead on the same lap. After that Robbie was having no issues protecting the line and wrapping up A2 with Peterson in second and Eaton in third.

A3 started smooth with the top 4 drivers running in a tight pack. Joel would make two bobbles in the first half of the race dropping him back to fifth and allowing Robbie to check out a bit. Corey Petersen was running a strong second when it seemed Joel Eatons TLR 22 was possessed by some kind of turbo demon. He made up for his self-inflicted deficit and was suddenly on Corey’s back door for the last four laps. Corey was holding the line and running just as quick. When the tone went off the two had half a track to go to the finish. As Petersen came around the last turn and punched it for the finish he opened up the inside line and Eaton saw the light. The two drag raced to the checkered flag with merely .009 hundredths on the clock between their finishing positions. The crowd erupted in hoots and cheers waiting for the official results. Eaton had snagged the second place finish in A3 and locked in the second step on the podium. Corey finished in third overall. Some speculation over transponder placement being the deciding factor was chatter in the pits. This made for an incredible last run for the event! Turns out their transponders were mounted in identical spots. Rob Gillespie Jr was a straightaway ahead of this battle that shocked the crowd and would take the win and the overall Win in pro buggy winning A2 and A3..

The 25th year of The April Fools Classic is in the books, with special thanks to all of the event sponsors – Proline – Team Associated – Racers Edge – Venom/Atomik – TLR – Horizon Hobbies - Tekin - Radiopost – Jconcepts – Recoil – PopChips

All of these great sponsors provided raffle prizes that were given away all day Sunday. There were car kits, hauler bags, batteries, tires, T-shirts, Hats and more!! I think everyone left with something. Additional Thanks goes out to the track crew for pulling out all the stops building the new layout and repainting the interior of the track and the pits.

Mark your calendar for next year’s event at Intermountain RC Raceway. Check the website and forum for additional event information as well as the Face book page for more photos and results from the race. 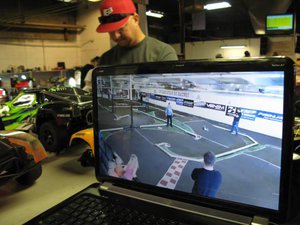 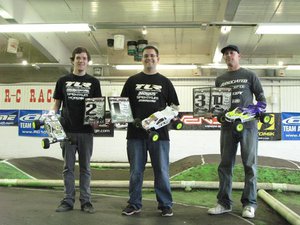 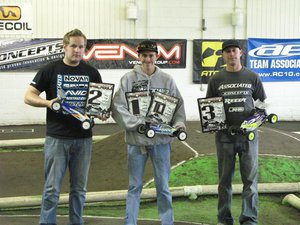 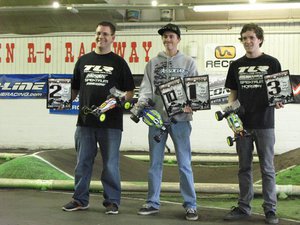 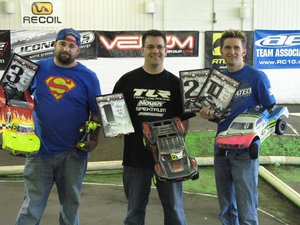 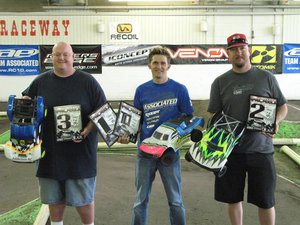 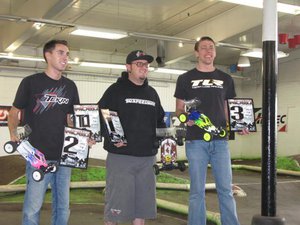 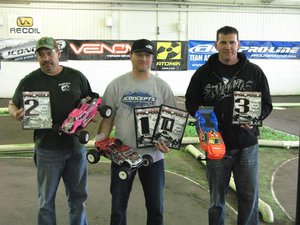 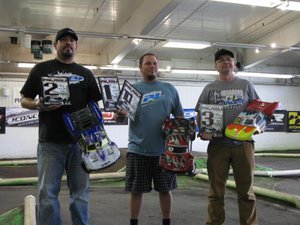