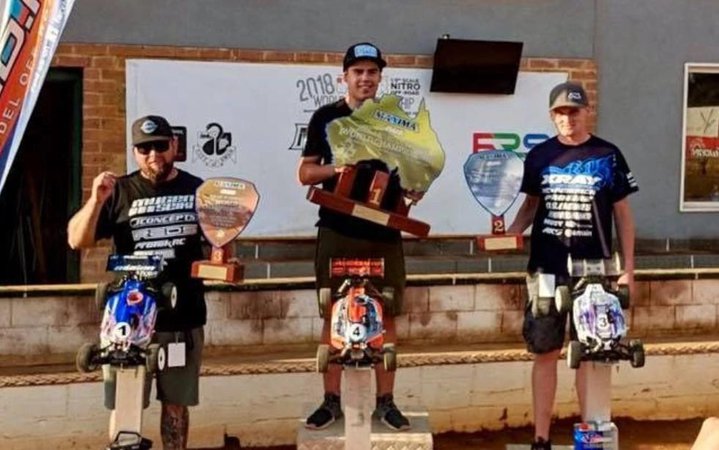 Since the inception of the brand, AKA Products has taken 3 World Championship titles in 1/8th Nitro Buggy. Check out a little bit of info from each win.

The first title was won in 2010 with AKA taking the wins finally in the 2 most recent championships in 2016 and 2018. For each driver it would be their first title and all three would be apart of a father son team at the event. Since 2010 there have been 5 different World Champions with AKA Products being the tire of choice for 3 of them. Each driver drove for a different manufacturer with a different program but the one consistency was the tires.

The first championship was in 2010 with Cody King in Thailand. Cody took the win from the 2nd place starting spot running AKA Products Impacts with the all new for the event red inserts. Cody's win wasn't a run away by any means. It was a fight to the end with teammate Jared Tebo. AKA would take 4 of the top 5 spots including both 1st and 2nd.

In 2016, David Ronnefalk would take an emotional win in Las Vegas with the AKA Products Double Downs which were released just after the event. The Double Downs filled a previous void in the product lineup by offering a tread that provide grip and stability in dusty as well as abrasive conditions. David stayed smooth and consistent on the well beaten track to take a convincing win.

Finally most recently in 2018 Davide Ongaro would grab the title in Australia after a fairly dominating week. Davide would give the Double Downs their 2nd World title. A once again tricky surface in 2018 would require a tire with both speed and stability, the Double Down would come out on top with the young Italian driver.