TALK IT UP TUESDAY: The World of Monster Trucks with Fred Reep 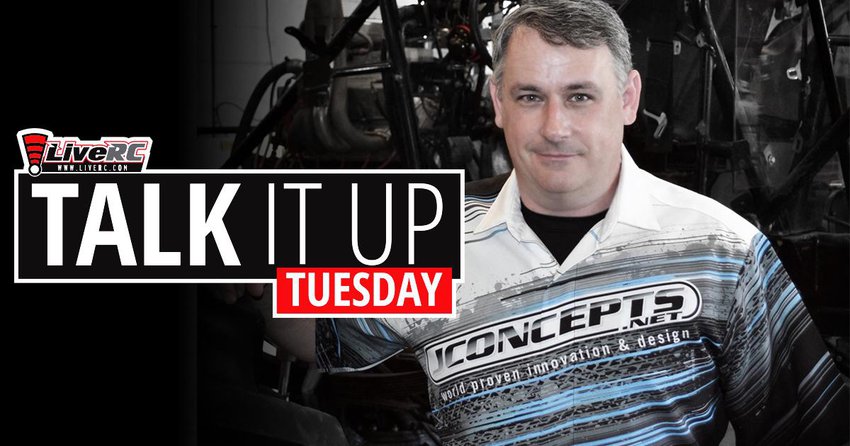 For this week's Talk It Up Tuesday we sit down and chat with R/C monster truck guru, JConcepts Fred Reep, to discuss the world of monster truck racing, it's increasing popularity, the future for the industry, custom builds, and more! 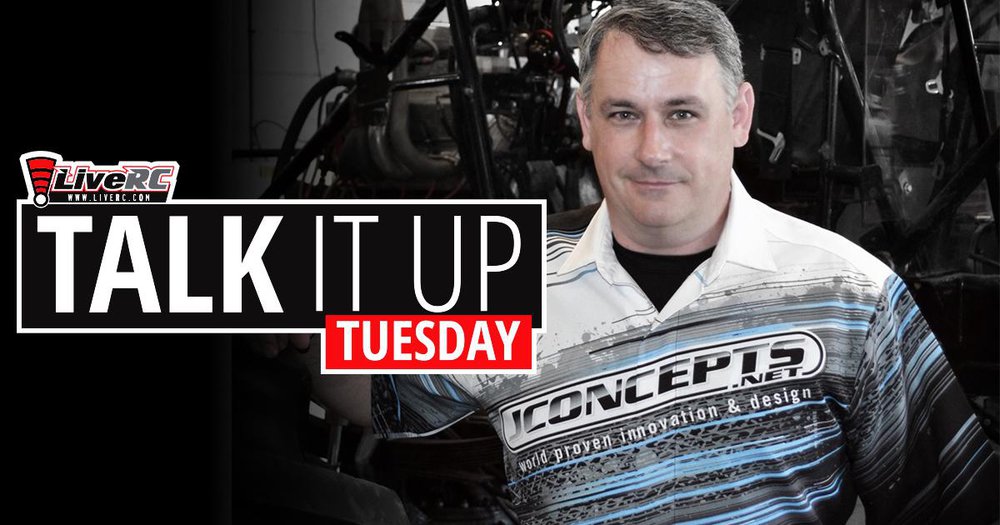 LiveRC: Welcome Fred to this week’s edition of Talk It Up Tuesday! Let’s start off by talking about when, where, how, and why you got involved in R/C cars to begin with?

Fred: I have to take it further than just R/C cars.  I've been involved in R/C for 40 years. My father and I built scale model R/C Tugboats and barges that we sailed back on Long Island where I'm originally from.  Why Tugboats of all things?  Well, my Grandfather was a Tugboat Captain in the US Navy and also a Captain of a small Harbor Tug in the village where we lived, Port Jefferson, NY.  So, there is a little family history there.  Continuing on with family history, my grandfather and his brother on my Mother's side were early innovators in sprint car racing in the 40's.  After seeing photos, hearing the stories I was inspired to get into mechanics and racing.  At an early age my only outlet was to build model cars and boats eventually graduating into R/C starting with Tugboats with my dad then evolving into R/C cars and trucks on my own. 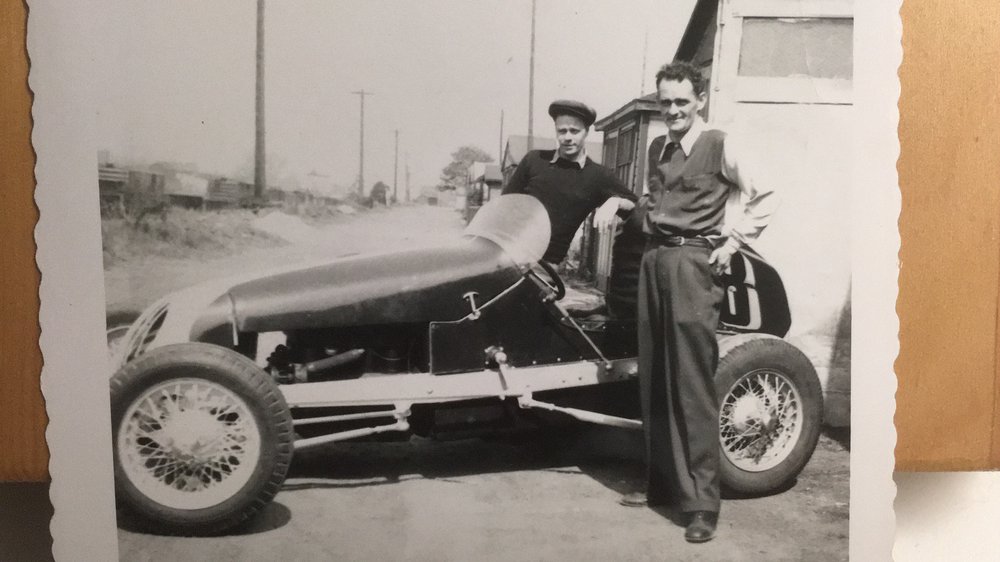 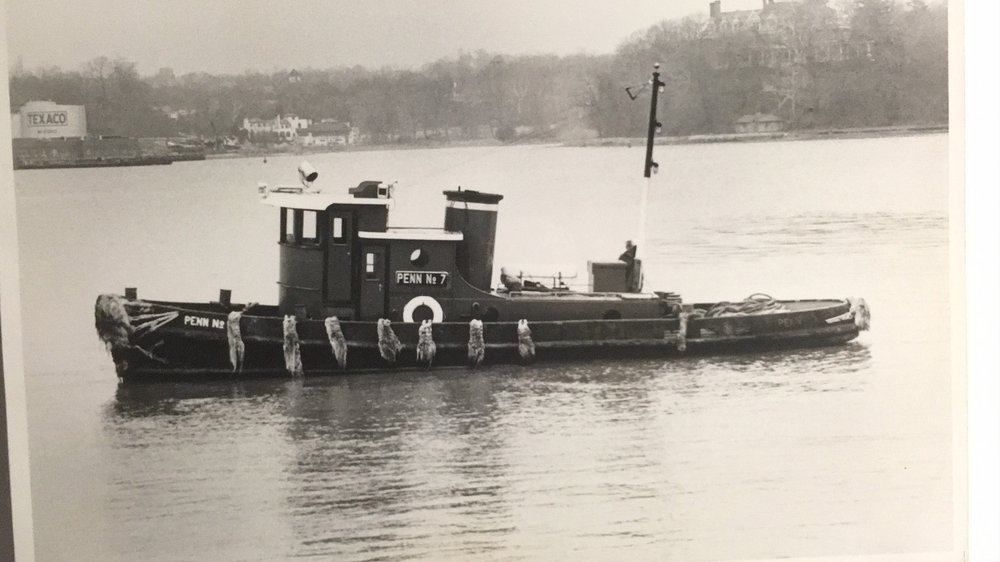 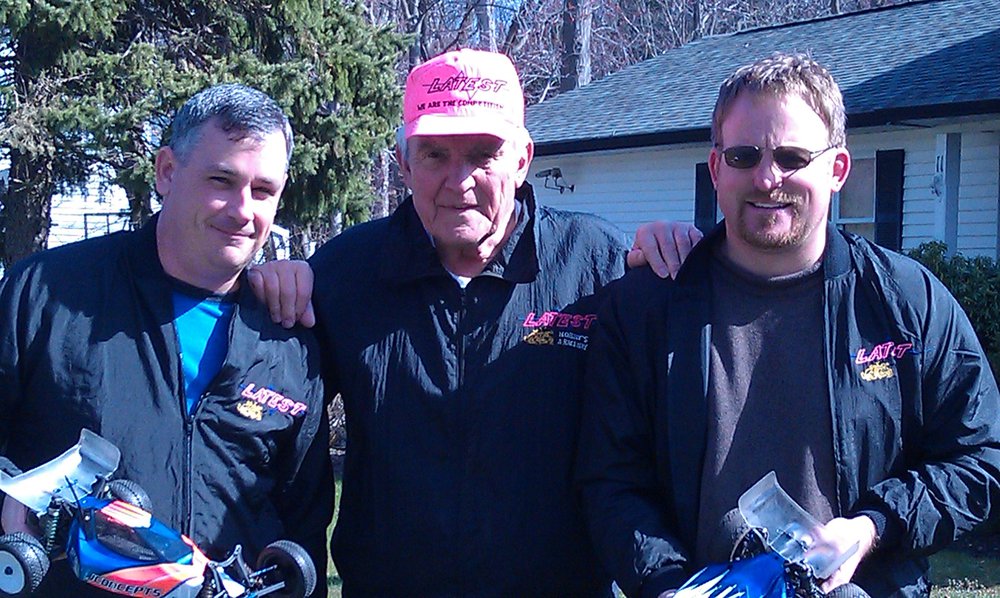 LiveRC: You turned what was once a hobby into a career as you know are an employee at JConcepts. What are some of your primary and daily roles around the office?

Fred: Primarily design, build, and test product.  Of course that's not all I do.  Having a mechanics background sometimes I have to help out Paul Wynn if a machine breaks down or a shop vehicle for that matter.  Since R/C Monster Trucks has been on a resurgence, I've been doing a lot of builds, traveling, setting up displays promoting all of the great products we have been developing. 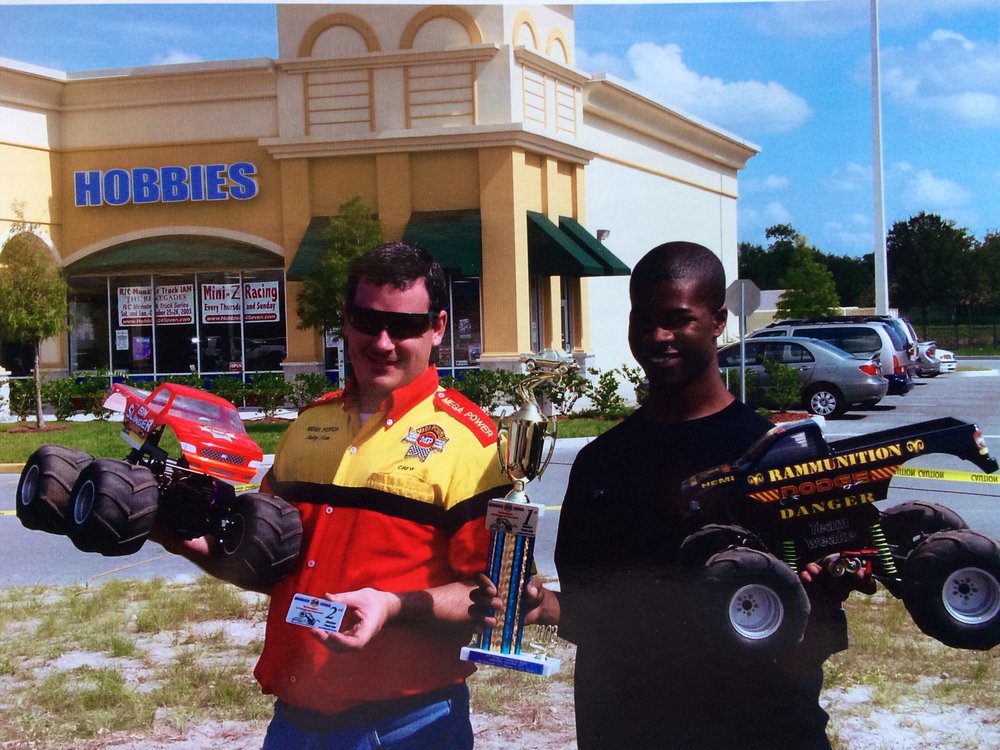 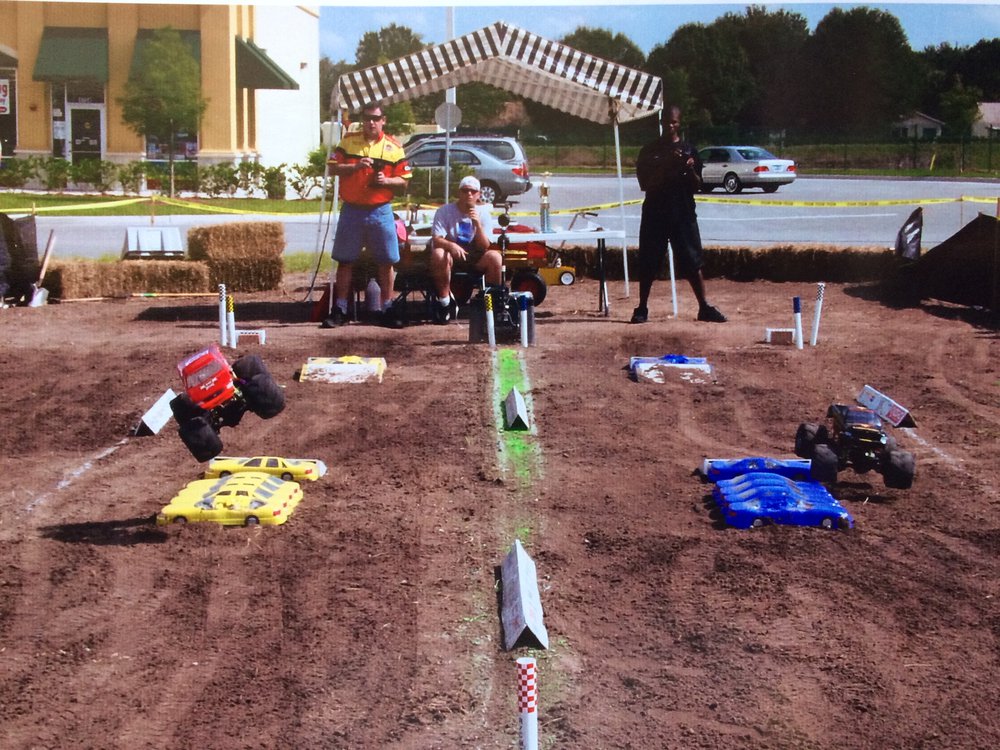 Fred: R/C monster trucks reminds me of the days when I started racing R/C cars and trucks in the early 90's.  Moms, Dads, Grandmas, Grandpas, always seemed to be involved with the kids at my local track.  It's really great to see the family involvement with these R/C monster trucks. 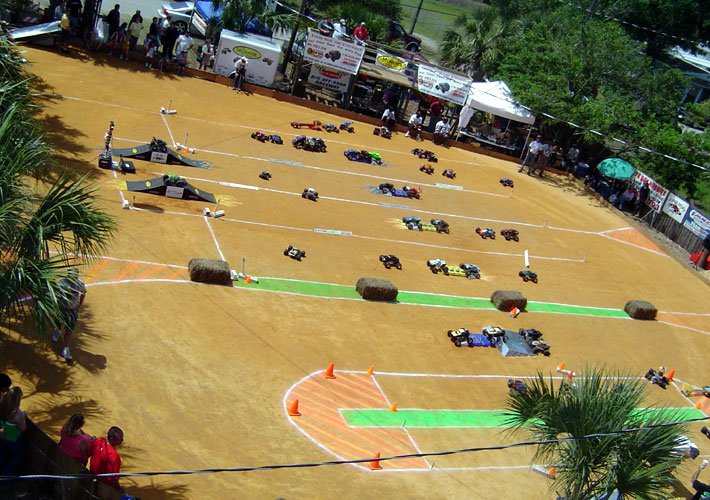 LiveRC: As someone who has never attended an R/C monster truck event, can you explain the format, types of racing, classes, and events that take place during one?

Fred: Events can vary slightly form one organizer to another.  Generally a program will start with a Show n' Shine competition which gives builders a chance to show off their builds.

Racing is a big part of any R/C monster truck event.  Typically each class qualifies then placed into elimination brackets just like drag racing.

Retro:  Representative of the old school days of monster trucks.  A stock Tamiya Clodbuster based build is popular for this class

Sport Modified: A mildly modified Axial SMT10 is popular for this class limited to a 17turn brushed motor

Shafty:  For some groups wanting to keep a "purist" class of drive shaft only monster trucks.

2.2  Monster Truck: Basically a class which was developed when the Axial SMT 10 was released to accommodate the smaller tire and wheel combo.  A very popular class with just a tire/wheel change you can run a Pro Modified chassis in multiple classes.

Mega Truck:  A class which has really gained some ground over the last year since the development of the JConcepts Fling King Tires and Dragon wheels. Again, with a simple tire wheel change you can run the same truck in multiple classes.

Freestyle  A perfect ending to any R/C monster truck event.  Just like the 1:1 trucks Competitors have a set time frame to "Wow" judges with big air, tricks, and stunts. 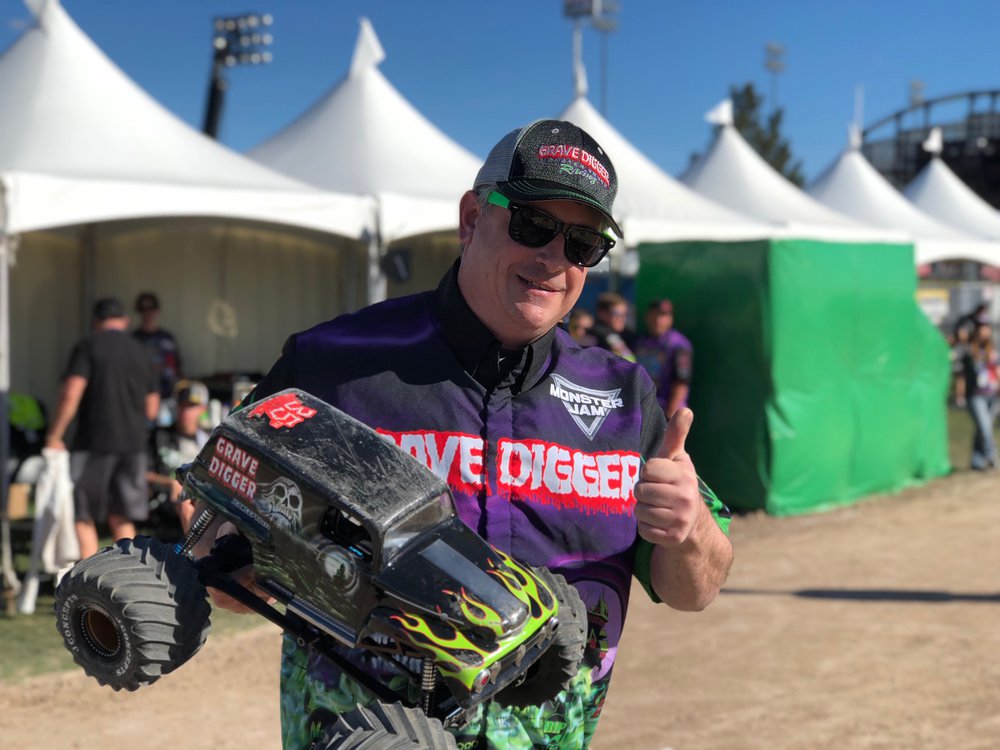 LiveRC: Are you more of a freestyle guy, or a racing guy?

Fred: Depends on what I would be driving. Lol.  1:1 Monster Truck I'm more into racing. R/C: 10-15 years ago I'd be more of a racer. I really enjoy Freestyle. It amazes me all of the time with these trucks how hard you can push and punish them.  It helps me in my career at JConcepts testing product to see how far you can push the limitations of a vehicles parts. 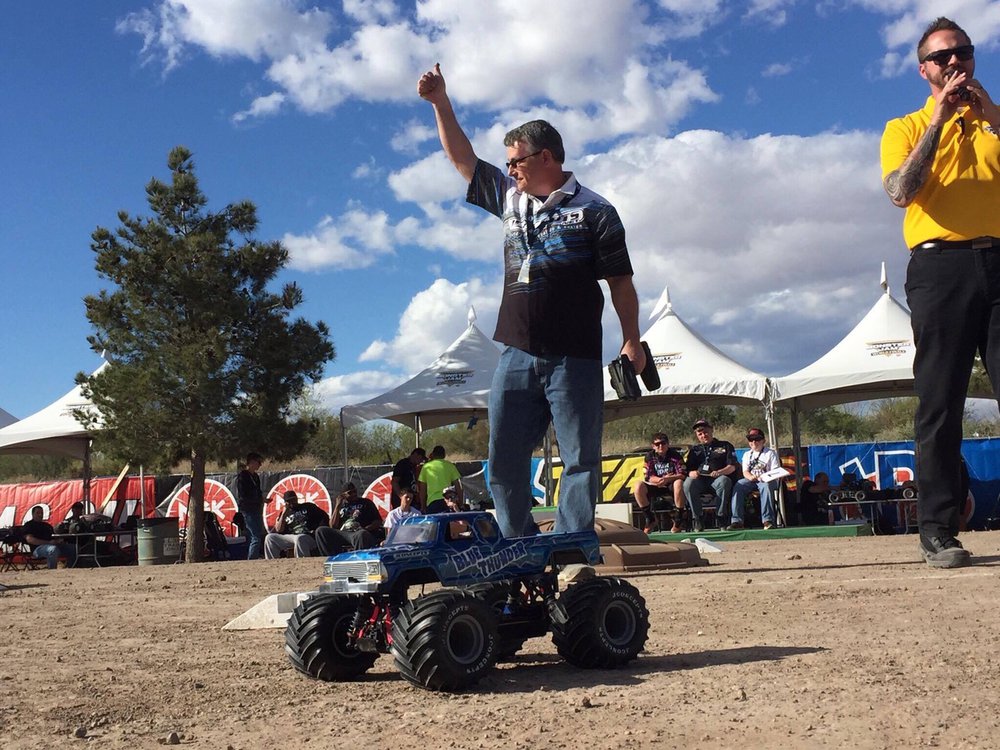 Fred: This is my third year invited to the R/C Monster Jam World Finals.  Each year the RC program keeps getting better and better for the 1000's of Monster Jam fans.  All of the competitors invited really bring their A game.  All of the RC Monster Jam Athletes go all out on prepping their trucks to resemble the 1:1 monster truck they have been chosen to represent.

2019 was extra special just because it's the First time the World Finals has been re located from Las Vegas, NV to Orlando, FL, local to JConcepts Headquarters. This year, I decided to give up my racing spot to Jason Ruona so he could share in the R/C Monster Jam experience.  My main job was prepping all of our racing bodies and trucks for the event, crew Jason's trucks, perform Freestyle and special encore jump.

Format of the R/C program closely follows the 1:1 program. Monster Truck Qualifying, Racing, Speedster Racing,  Monster Truck High Jump, Freestyle. I really enjoyed crewing for Jason.  I put a lot of effort in making sure his trucks were 100% every time they hit the track. Grave Digger had both of the spooky lights shining throughout the event.   Yes, the event is fun but I take racing very seriously.  Another highlight for me is burning a truck down to the end of the clock in freestyle. It's a really cool feeling when you get oooh's and ah's from the crowd when you have completed a great trick. 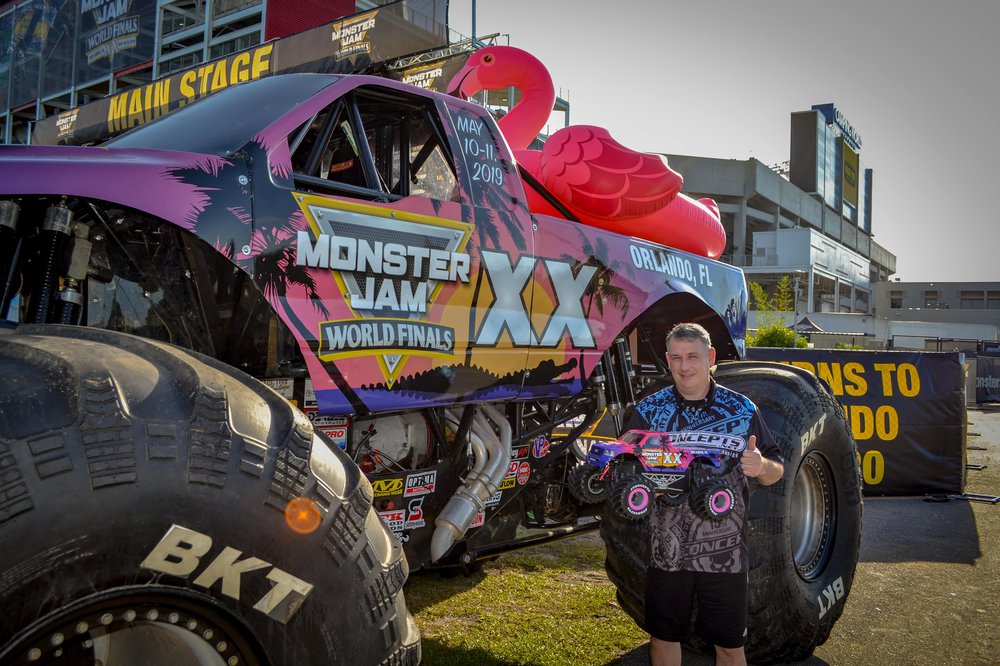 LiveRC: Part of what makes the R/C monster truck scene so intriguing is the real-life appearance, the custom builds, and the amazing details to these trucks. For someone (like myself) who has zero knowledge of building, buying, or joining R/C monster truck racing – where do you begin?

Fred: Best place to check some of this stuff out is the JConcepts website, particularly the JConcepts Blog and JConcepts Garage. We have several build features from some of our drivers, myself included. Dan Wyatt, Tad Goad, Matt Stoltz, Russ Bryant, myself have a lot of experience building these trucks from mild to wild.  We also have great how to videos and extensive event coverage.  We can help point anyone in the right direction. 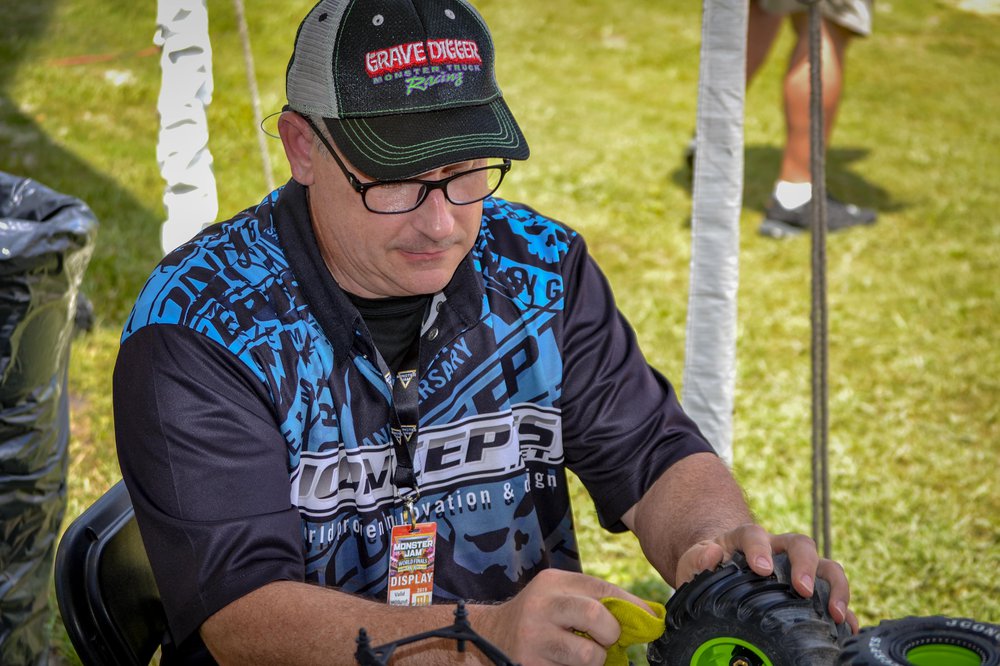 LiveRC: What brand chassis, components, and accessories make up your Grave Digger truck used at the Monster Jam Finals?

Fred: One of our drivers, Tad Goad, custom built a chassis to utilize a Kyosho Mad Force drive train. The Kyosho Mad Force axles do a great job standing up to the punishment from my freestyle performances. Hobbywing was nice enough to send us a Xerun 4300Kv motor and XR8 speed control to give me enough horsepower to send Grave Digger into orbit. Reedy provided the power steering with a RT2207A servo. Reedy also powered the beast with a #27318 4200 50c Wolf Pack battery. 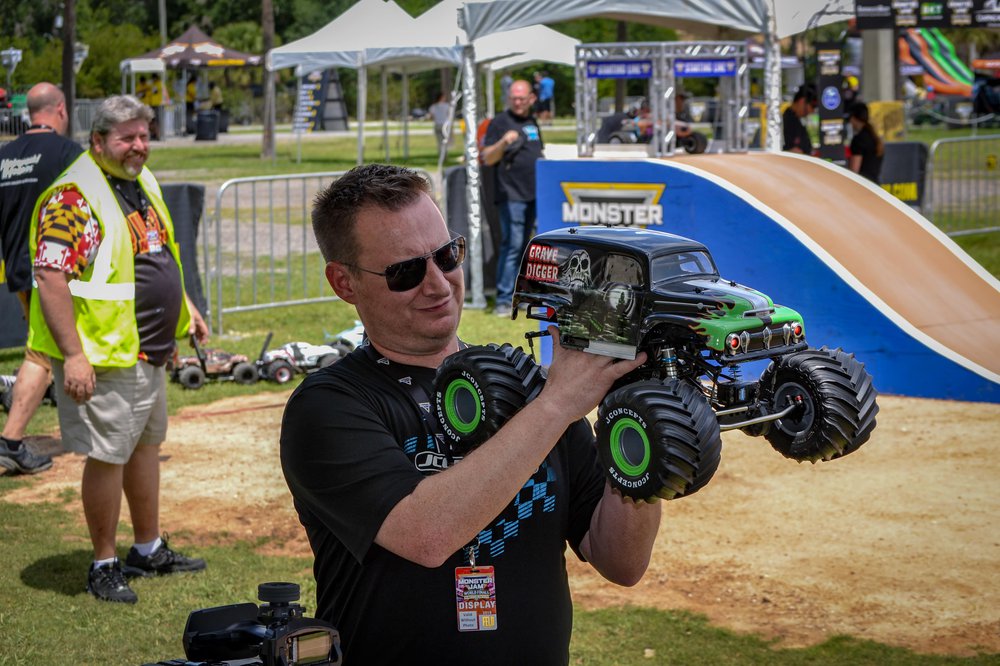 LiveRC: JConcepts has been a part of hosting multiple R/C monster truck events around the country. For local tracks and/or hobby shops looking to dive in and create an event or following in their area, what is some advice you may have for them?

Fred: You can follow some of the Clubs on social media: Trigger Kings, Showtime RC Motorsports just to name a couple.  Many RC clubs have alot of talented builders that could help direct you on a build. 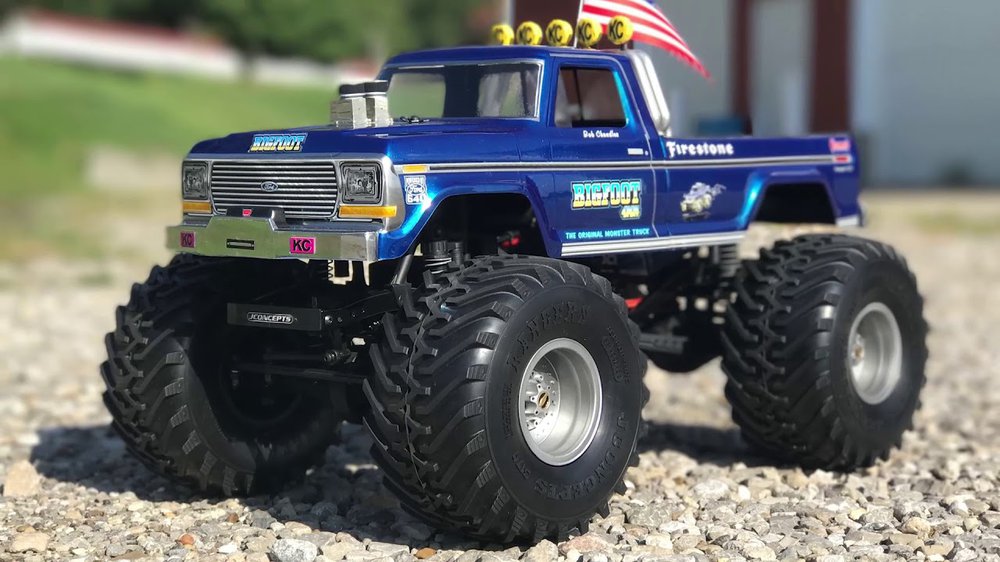 LiveRC: You have built numerous replica and extravagant custom trucks over the years. Which of your builds is your favorite, and why?

Fred: I did an Axial SCX10 build to display one of our JConcepts #0305 1979 Ford F-250 bodies on. Of course Jason wanted a BIGFOOT 1 replica so, one thing led to another parts kept getting changed, added rear steering, RC4WD leaf springs, pretty much evolving over a period of time into a cool replica truck. Dan Wyatt was able to get a set of our #3380 Midwest Wheels chrome plated which really set off the build and realism. This was featured in a Tower Hobbies highlight build feature which I'm pretty proud of. 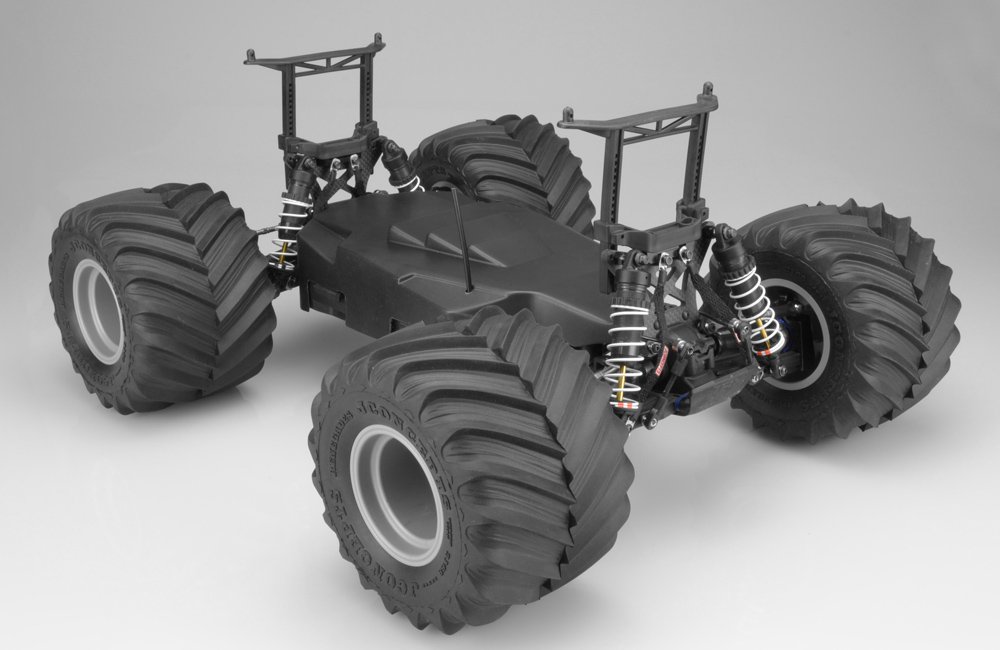 LiveRC: What is your favorite JConcepts monster truck product, and why?

Fred: I like the JConcepts #2477 Suspension conversion kit.  The intention of this kit is to give someone who may own a Traxxas Slash 4x4 or Stampede 4x4 and opportunity to resurrect an old platform that might sitting on the shelf introducing them to the world of R/C Monster Truck Racing without too much of an investment. The durable platform of the Slash 4x4 makes it an excellent candidate for a monster truck. 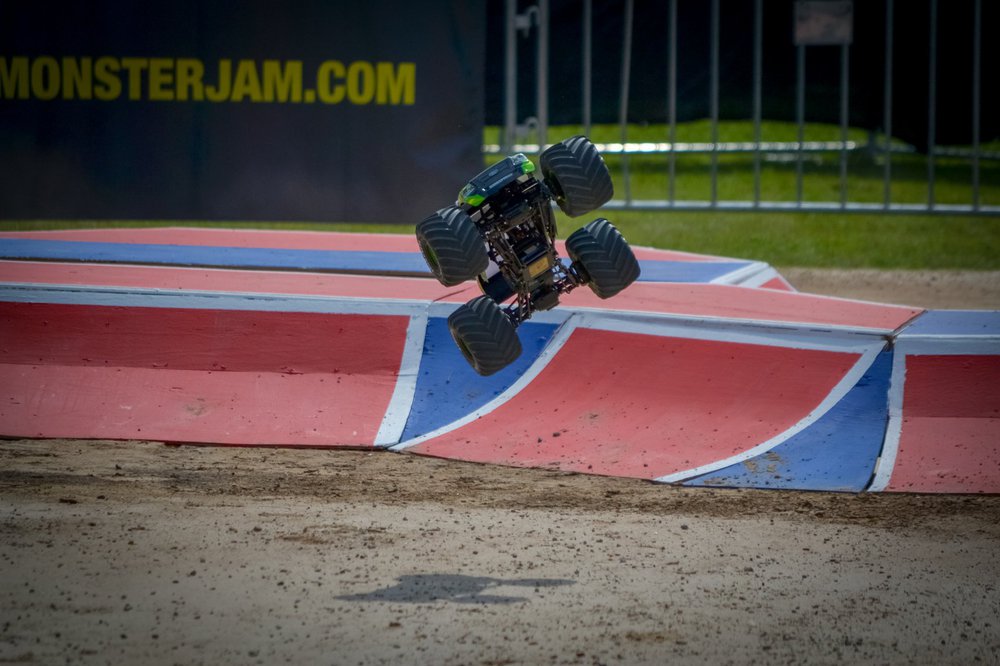 LiveRC: Where do you hope to see R/C monster truck racing in the next five years?

Fred: I hope it stays on course and keeps growing.  It's very hard to predict where it will be.  Electric R/C Monster Trucks have withstood the test of time. One thing I can assure you is that Jason and I are on a mission to support these guys and keep the tire rolling. 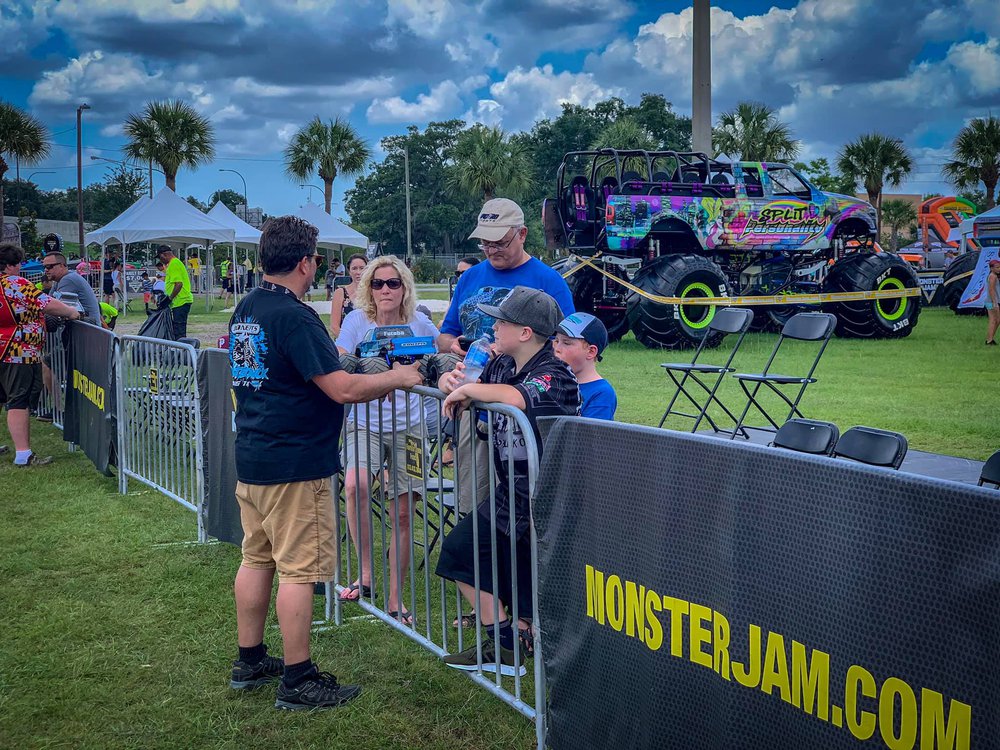 LiveRC: What is one thing you would like to see change in the R/C industry the most?

Fred: Like I said earlier, I've been involved in R/C for 40 years.  I think as an industry we need to think back at what actually got us into the hobby when we started. I think we need a back to basics marketing strategy. We need to try and get the family's back involved. Getting families involved at an affordable price point will help develop the next generation of hobbyists and racers. I've done a lot events over the years, some of the most successful for the "hobby or industry" were not the big 250+ entry events but, the smaller parking lot, grass roots type events where you had one on one interaction with general public. This helped expose people to the hobby. The R/C Monster Jam World finals is a good example of this type of exposure. No prep parking lot drag racing is another good example of this exposure platforms. Not that these forms of events are everyone's cup of tea but, they are good examples. 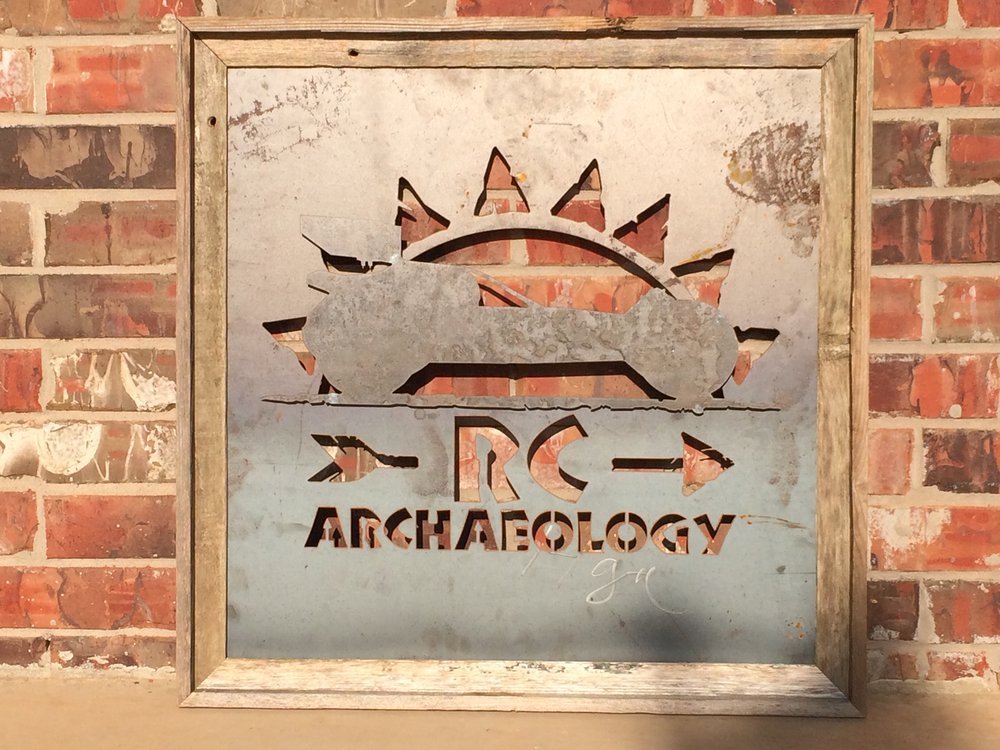 LiveRC: When you aren’t wheeling or building monster trucks, what are some of your other hobbies?

Fred: I collect vintage R/C cars, boats, planes, and parts. I have an RC Archaeology page dedicated to the rusty gold of R/C's past. I enjoy working on 1:1 trucks, I also enjoy antiquing with my family. 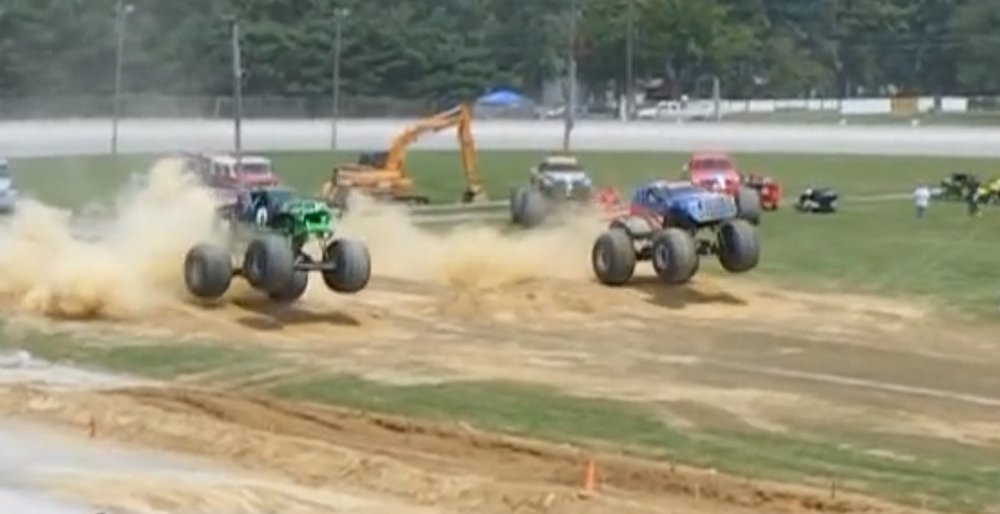 Fred: I'll let you know when they race each other again. 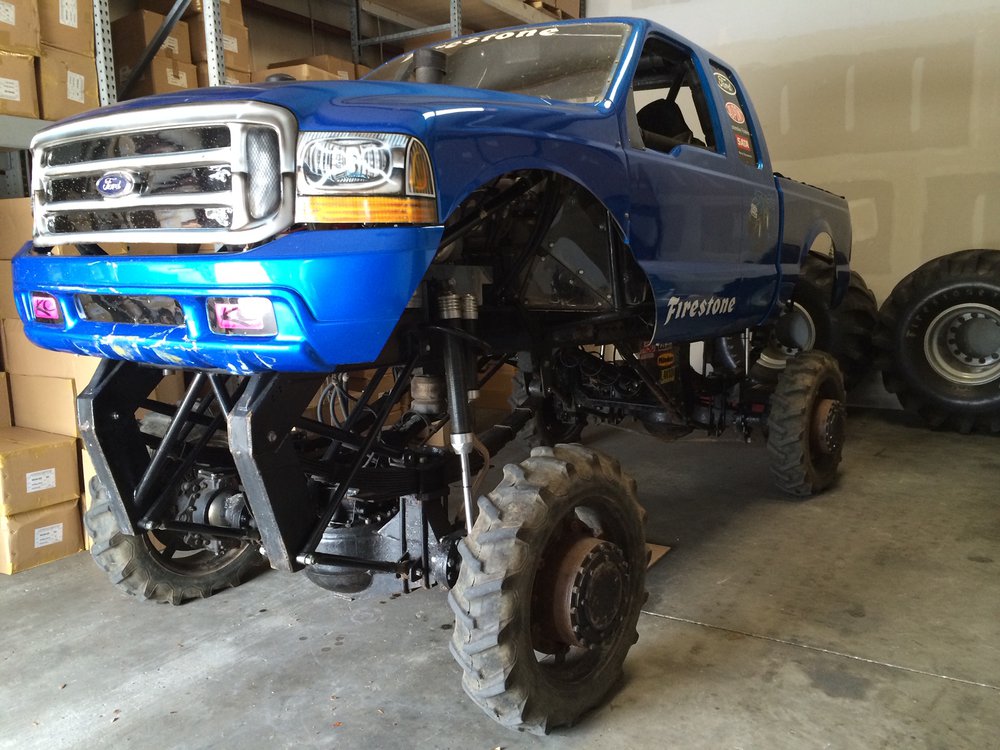 LiveRC: What is one thing most people don’t know about Fred Reep?

Fred: I have a "BIG" blue Ford parked in a garage.

LiveRC: When and where is your next event that you will be attending?

LiveRC: Thank you so much for joining us today Fred! We have definitely learned a lot about the R/C monster truck world. Is there anything you would like to add before we let you get back to work?

Fred: Thank you so much for the interview, I look forward to the next one.  Thanks to all of the supporters of JConcepts products. 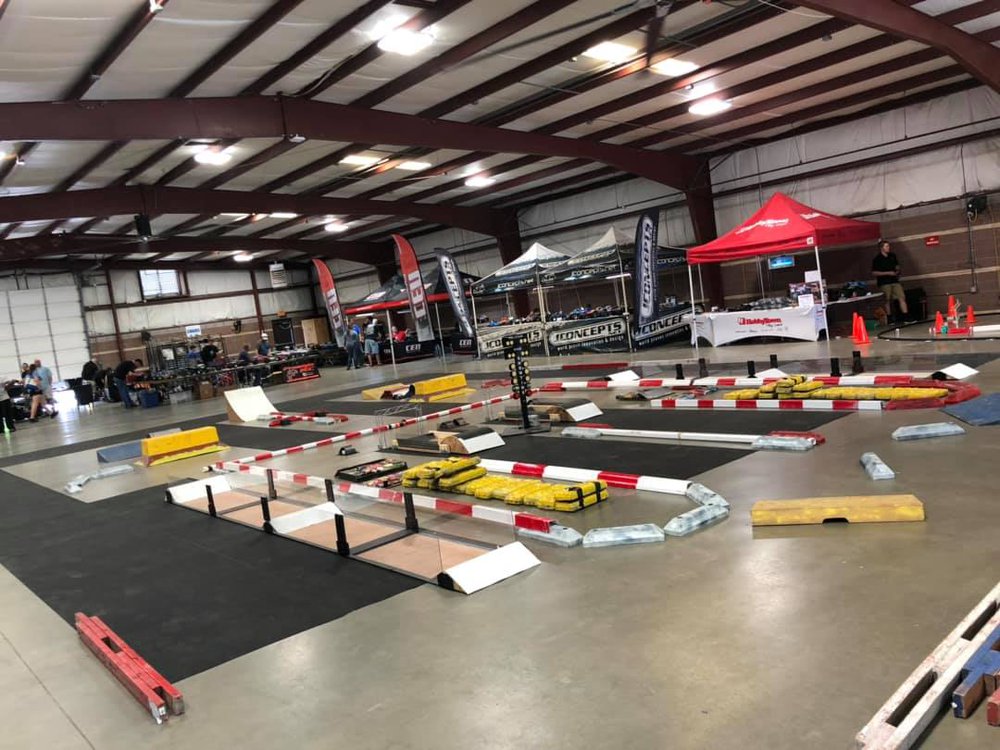