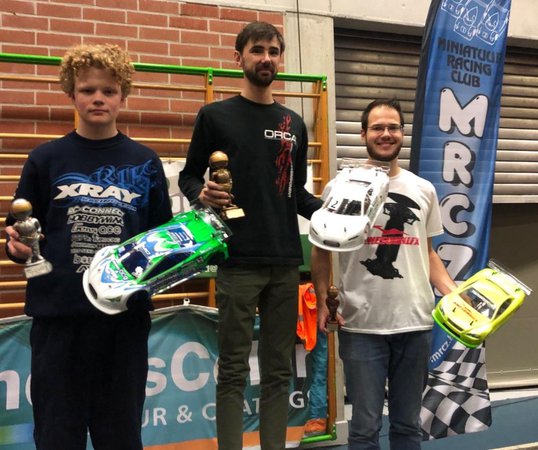 MRCZ, one of the oldest electro clubs in Belgium hosted their traditional Open Invitational race during the last weekend of November.

The open invitational started over 20 years ago as a mainly 1/12th race, but evolved to a race with a mixture of fun classes and more competitive classes. The event is held over two days, with 3 rounds of qualifying on Saturday followed by 2 more on Sunday and also 3 finals for each category. The categories that attracted most drivers were Stock 13.5 touring, Stock 13.5 1/12. The fun categories consisted of GT 12, Tamiya Truck and 1/10 Fronti.

Manu Wagner was really fast during the first open practice. My car had virtually no grip on the new tyres, but my dad later found out he treated the tires with WD40 instead of our normal additive.

From practice 2 onwards my car was on rails, and I managed to win all 5 qualifying rounds, so I was pretty pleased with my Hobbywing powered T4 20! Manu was a bit off the pace and we exchanged some thoughts in the evening during free practice. I did some laps with his car and we discussed some changes like the droop settings, diff density and roll center shims.

On Sunday morning Manu’s car was much better and he managed to take the P2 starting spot from Mitchell. My dad put one extra screw in the motor mount (the one before the spur gear opening) and this gave me the traction I needed. I improved my best lap time to 9.7. Manu and I were the only drivers to lap under 10 seconds.

The biggest problem would be the traffic in the finals. We ran the heats in 3 groups of 6 drivers, but the finals would be run with 10 drivers. In A1 I took the holeshot and was building up my lead when I got hit by a lapped backmarker. This allowed Manu in the lead and I chased him hard but could not pass him.

A2 was an easy victory for me as my car was really on rails. Man finished 2nd.

A3 was a nightmare for me as my car suddenly died in the chicane. My dad later found out that the extension cable from the ESC to the receiver was damaged … I was really upset by this as I totally dominated the event and had to settle for P2 in the end. I was however happy that Manu won the race and that our new car created so much interested. Many local drivers already bought one and will start building it asap!

The 1/12th scale has traditionally been very strong at the MRCZ club. This also showed with the strong entry list. Prerace favorite was Rico Claeys who just came back from a strong P5 finish at the annual Masters of foam 1/12th scale race.

After my podium finish at the 1/12 worlds in South Africa, I didn’t drive a lot. We have done some testing sessions at Racing Arena Limburg with our X12 20, but in modified configuration. A friend of mine took the X12 20 home to rebuild it and optimize it for the 2020 World in England.

After the reseeding I was in P1 and the car felt really good. I also managed to win Q1, but after that it all went a bit backwards. In Q2 I was leading again, but crashed while lapping and lost a 1 lap lead. After the qualifier we saw that our front suspension came loose during the crash…

The biggest problem however was my power package, and I lost out massively on the straight and while accelerating. Racing stock 1/12 is really difficult we found and we were struggling a lot to find the speed. The handling of the X12 was really good in the meantime.

During Q4 I was on pace to grab the TQ spot, but a backmarker got in my way after a crash and I had to retire the car.

After the qualifications I lined up in P2. In A1 I couldn’t start because my motor pinion fell off and I finished in P2 and P1 in the next finals. This gave me P2 overall, which was the best result I could hope for because of our lack of knowledge in 1/12th stock racing. I however look forward to do some 1/12 modified testing, but we will never mix it with touring cars again! I was also quite impressed with the great result of young Niels Degryze, who ran an X12 20 car and took P4! 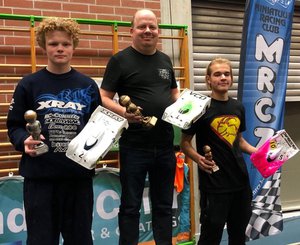