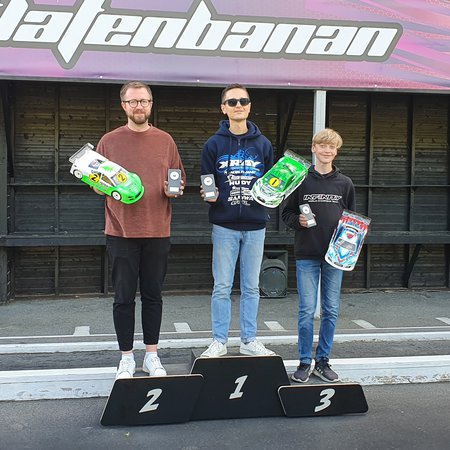 The 2nd round of the 2022 Swedish Cup, in the classes 1/8 and 1/10 nitro, as well as 1/10 electric, was held at the beautiful facilities of MHF Skarpnack in Stockholm. Around 50 entries saw great weather conditions throughout the weekend, although traction levels were a bit affected by tree pollen in the air.

In the 1/10 electric class, I was able to win all qualifiers and finals, as well as setting the fastest lap in the process. My X4'22 ran great all weekend, even though the rapidly changing conditions.

In the 1/10 nitro class, the team was well represented by Mickael Brandt, Markus Andreasson, as well as Markus Elmerfors. In the end it was Andreasson who managed to put his NT1 on the final podium spot after a great drive!

I want to thank Latera Racing for the trackside parts support all weekend, as well as the hosting club (MHF Skarpnack) for a perfectly organized event. Until next time!