A MOMENT WITH MIKE: Elephant in the Room - Time to Rewind 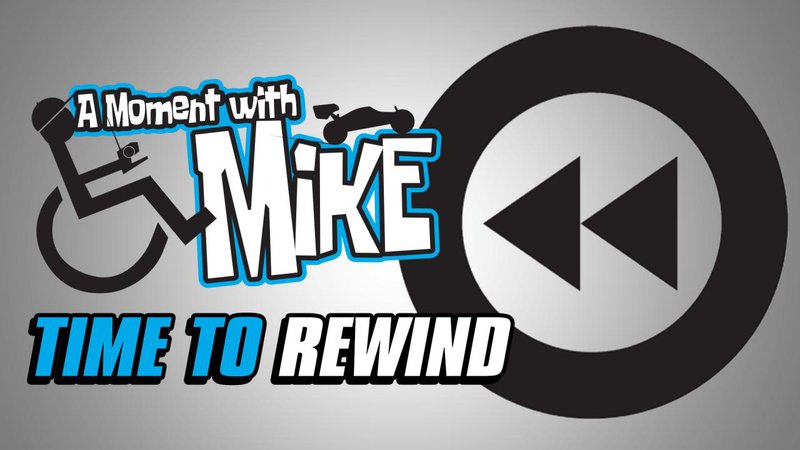 Here we are, Wednesday – the new home for “A Moment with Mike”. There is a million things to talk about, and normally I tried to avoid the "negative" side of things best that I can, but let’s cut straight to the chase - there's an elephant in the room. Over the past few weeks in R/C, a number of highly recognized individuals (all from different aspects of R/C) have cut all ties with R/C car racing for one reason or another. In addition, I've seen a lot of personal friends and racers making the same decision lately. I am not here to specifically discuss all of these individuals, their decisions, or the reasons they are no longer involved in R/C, but rather to discuss the reason we all started R/C racing in the first place.

My interest and involvement in R/C car racing started years before I was born. It was the 1980’s and my parents had just got married. Since they were 14 years old they spent week in and week out together at the motocross track with my dad racing and my mom cheering him on. After getting married and making plans for a family (aka me), my dad decided to hang up the riding boots and take on something a little safer, less expensive, but still thrilling and fun. It didn’t take long, and my dad discovered R/C car racing. His first race was in a chicken shed in the middle of nowhere, in which it went so “well” his car launched off the track and was taken hostage by the live chickens spectating from their pin alongside the track. My mom is one of the most loving, caring, and optimistic people I’ve ever known, but after his debut R/C car race, even she told him, “Maybe we should find something else to do. 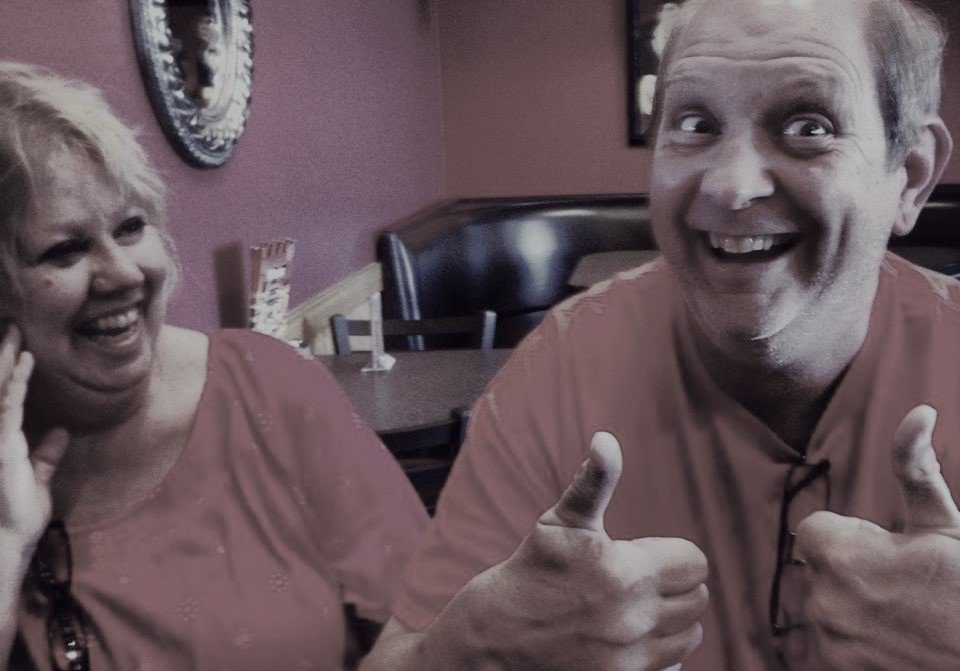 (These two have been celebrating race days like this for over 40 years together.)

Despite a rough start and a few fights with the chickens, my dad kept at it. I was born in 1988, and as a family we went weekend after weekend R/C racing together. To the disbelief of my mom and I, by the early 90’s my dad (Greg Garrison - aka "Homer") began making his fair share of A-Mains around the country. 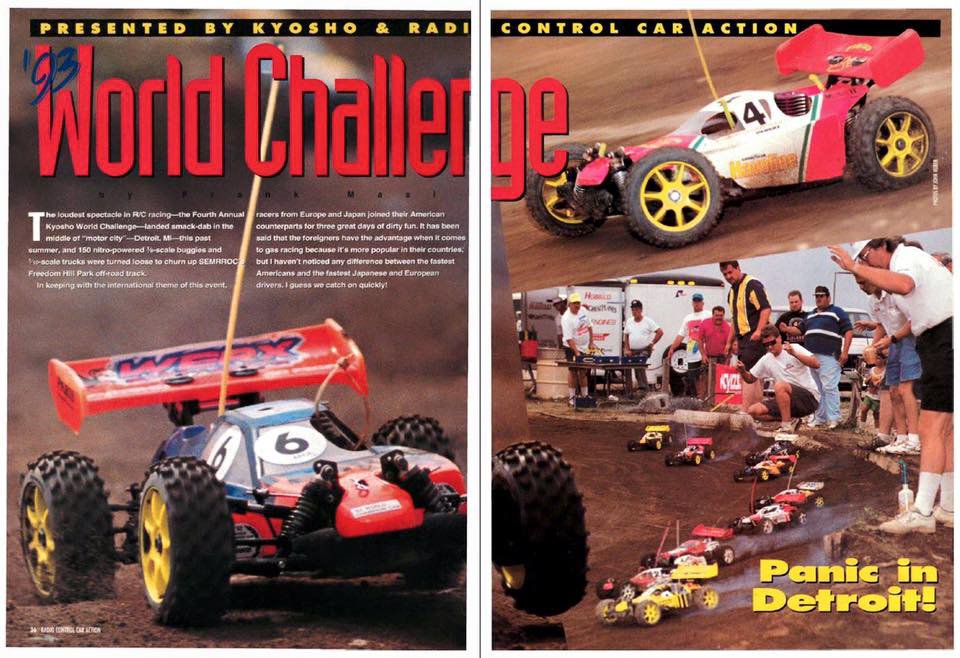 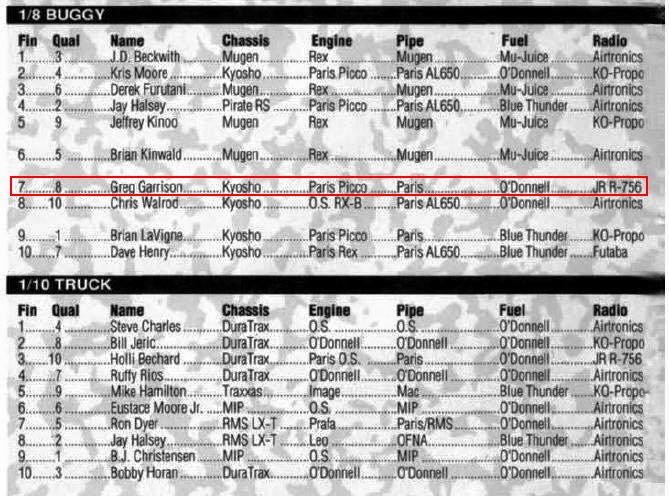 In the late 1980’s and early 90’s there was a very select few R/C car racers who made their entire living out of purely racing their R/C car. At that time there were also a very select few who received any sort of sponsorship, support, or a discount from the teams. Example being when I watched my dad break in an A-Main warm-up after qualifying ahead of the two factory drivers using the same chassis in Hemet, California. Despite the impressive results that weekend, the sponsorship he received from the team manager at that race was an a-arm to use for the main…but ONLY if he promised to purchase a set from the hobby shop and replace it afterwards.

My dad is still racing R/C cars today. He’s never been paid to race, he’s never signed a sponsorship contract, and he’s still working a 9 to 5 day job to pay for racing on the weekend. The point I am trying to make is that when he races R/C cars he races for one reason – the pure joy of doing it. 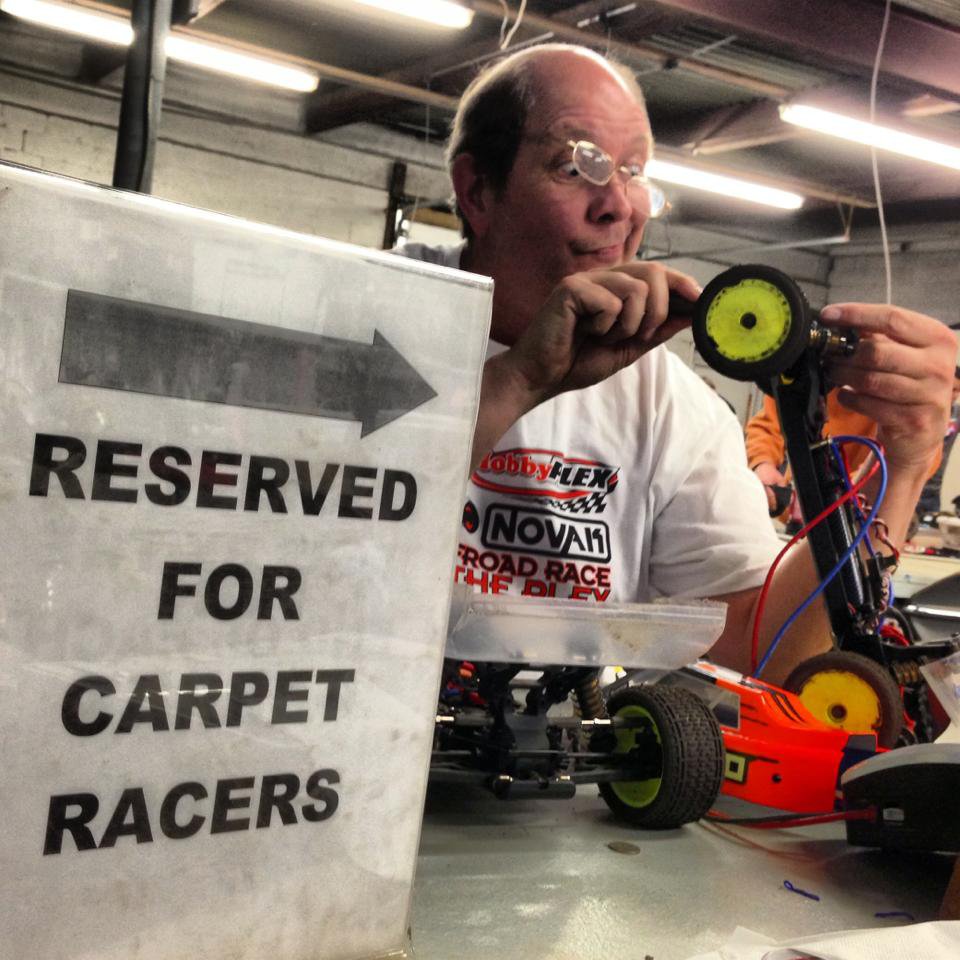 (My dad takes his car setup and maintenance extremely serious...)

I can honestly say that I have never asked someone how or why they got started in R/C, including the top pros of today, and received the answer of, “I heard about sponsorship deals and a possible paycheck”. No one gets started in R/C because they heard about coupon codes and expectations of getting paid, most new people in R/C don’t even realize that paid R/C car racers even exist. They get started because it looks like (and is) fun.

For too many people (I said "too many"...not ALL), somewhere along the journey of starting out as a beginner racer, getting faster, moving up the ranks, and letting the years pass, the photos of fun times and spending late nights laughing with friends at the track have turned into hate for the hobby and finding any means necessary to hurt those involved in it.

We all started R/C car racing to have a good time, and that is where it needs to stay - no matter how many sponsorships you sign, no matter how many races you win or lose, and no matter where it takes you in life. Life is short, and you owe it to yourself to have fun living it. I am going to ask you to be selfish for a minute, as I think it’s time to rewind.

We need to spend more time focused on ourselves and the reasons we started racing R/C cars to begin with, and spend less time sharing our opinions of others, stirring the pot of controversy, and killing the fun in R/C racing for others that we ALL once had.

The R/C community is a family in itself, and it's time we bring us all back together and start acting like one.  #RespectYourFamily