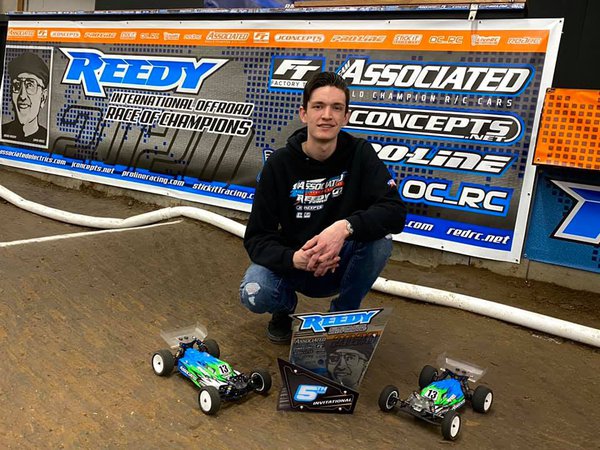 Broc Champlin would like to share his side of the Team Associated departure situation, check it out here.

"To the RC World,

As many know, there was a controversy of what exactly happened with Associated Electrics and I. I’m here to clarify the rumors because quite frankly, I’m finding it obnoxious and irritating having to explain myself over and over again. When people start messaging family to find out details, my name is being ran into the ground, and messages/comments that are harassing me get said, it is my job take care of it. I asked AE to clarify everything but they appear to want me to do it.

Associated Electrics and I began renegotiating a few months back. Multiple things were asked for but were not received. They weren’t open to fixing what I needed fixed. With that, I felt my program was not as good as myself. I tried and tried. Things didn’t get better. Behavior from people, on my team, towards me, really pushed me away. Advancements and ideas to improve the product, they turned away from me. Issues with electronics, nope, not fixing that because I’m the only one with the problems. You get the point.

Even though I won races, I feel my potential is much much higher. With that going on, I felt it was right for me to search for what I was in need of. I went out and found what I needed to better myself in what I want to make a long term career as it has already become. I went and found the correct support in the areas I struggled.

I was still under contract with AE/ Reedy for 2021 as I signed a two year deal that began January of 2020. Because AE wasn’t open to fixing anything and didn’t counter offer (which I gave them a chance), in order to get out of the contract, I had to either become a privateer and or quit, or pay for a buyout. I chose the option of a buyout. For personal reasons, I’m not saying what I paid. That’s nobody’s business except AE’s, and mine. With that, AE signed off the “release” form and sent it to me so I could then sign the contracts I had aligned for 2021 and beyond.

Somehow, the “media,” found out and said I was released making it appear as if I was fired. A tad suspicious but I understand the frustration from the organization. I was not fired, I LEFT!

Many people saying, “It’s the Florida incident.” To clarify that, it was a race move and anybody racing for a pay check, would’ve done it. AE didn’t say a single word about it. People saying, “Past behavior.” Keyword, past. I used to get upset, let out my frustration, do things such as slam a car down, yada yada, that’s the past. I haven’t done something that stupid in quite some time. I owned up to the old me and fixed those problems to not make those mistakes again. It’s been a long time since something has come from me with any character of such. You want to be great at something, you have to own up to your failures. I’ve grown a lot as a person and within my racing over the past year and years. I’m still so young and maturity comes along with age. Once again though, AE never had a single problem with any of that as long as I didn’t allow those things to happen again.

AE still wanted to continue out the contract but I wanted what I felt was best for me as I want what’s best for them. Hell, I could’ve been a pain in the butt and just never told I was. AE is one of the most prestigious companies in the industry. They have done so many things for me and I can’t thank them enough for the time there. Leaving is going to make it awkward at first, however, people at AE are still close with my family and I. Who knows, maybe someday I end up back with them but I can’t predict the future, if you can, teach me. Lol

Everything in my program shall be announced by the end of the week and I’m super ecstatic on where I have landed. Such great teams, great products, and they have my back like I have theirs. MKS got announced today. Everyone knows I’m still with Jconcepts and Whitz. Everything beyond that is brand new! Let’s get it rolling baby"