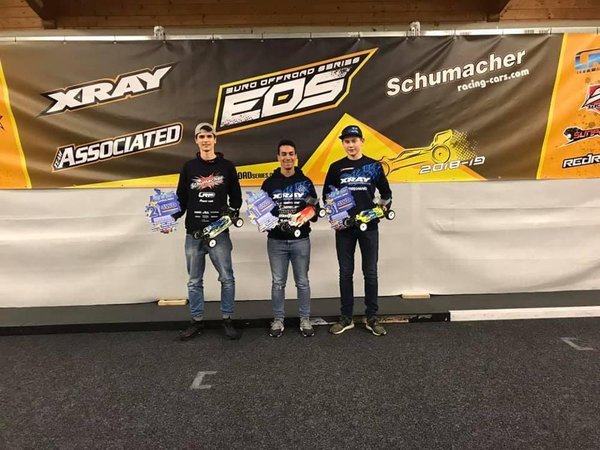 We always expect a different race when we go to Daun, there is more room, and the speed is higher in general than other EOS rounds. Its cool that it is so different layouts and you have to prepare in a different way. Its for sure a challenge for all the Teams. There are so many good drivers and their Teams are working hard to get their  drivers into one off the 3 available places on podium in each class.

We do not have the same posibilities to prepare as other drivers, but we do other sports at same time, and we try to adapt this over to RC, and it seems to work out fine. Without a team that works hard I think it had not been possible. Its a good feeling to have when we go to a race and you know that this is going to be a hard but fun weekend, and we all try together to help out so everybody in the Team will have best possible chance to do good.

So this weekend was no different to the other races, I think the setup change we made for 2wd, was on point, and actually gave us possibilities to fight for TQ and win, and that felt good, it was some small driver errors that took that away from Daniel. Nevertheless, big congrats to Lee Martin for his win!

In 4wd we struggled a little in start, but sorted out for the last practice seeding, so car was good and we had the speed. Bruno was really on point this weekend, and he did a really good job. He took overall TQ and the Victory in the end! Daniel got some problems already in first qualifier, so he had to park the car. We had to struggle through the next rounds and we knew that the best position we could manage to take was 4 from the grid, and we made it. And then we could fight for podium from there!

It was some thrilling finals, and first final went good, Bruno 1, and Daniel 2. Final 2, it was really crazy in the end, a big crash up front, and everything went fast, Daniel hit a sidewall ending up in the middle barriers, tried to get out of it, lost off course a lot of time, and came still second in final, but was later on taken away one position because a protest of cutting the track. We said ok, but still I think there is other situations that should have also been called, when drivers in the wall fighting for the win, crash and end up in other side, just continue with no penalty. But again it´s racing and we choose to be a part of it, so sometimes there are for sure other drivers that feel the same as we did in that situation.

The 3rd round of Euro Offroad Series took a place last weekend in Daun, Germany. The event saw about 380 entries, which made it the biggest EOS ever.

The 2WD part, I seeded in the B main group, in which I stayed also after qualies, on the 3rd place on B main grid. I took 2nd in B1 and was able to win B2, but because we ran only two final runs, the better time was deciding the winner. Joel Valander took the win in B1 just 0.1 second faster than me in B2, so he won and I was 2nd.

With 4WD I unfortunately seeded in the C main group, but was able to put some good runs in qualies and qualified 7th in B main. I put a good run in B2 and took the 4th place.

With Truck I seeded as 3rd for the qualies behind Jörn and Joona. The first two qualies were not so good, but I managed to take TQ in Q3 and 2nd in Q4, so I was starting 2nd on the grid behind Wesley van Helmond, who won the Q1 and Q2. Was fighting for the first place in A1, but could not hold it from Jorn and Joona. But, A2 and A3 went simply amazing, as I managed to win with a very comfortable gap!!

Super happy about my XB2, XB4 and of course the XT2! Thanks a lot to all my sponsors, and also to Martin Bayer for the help! 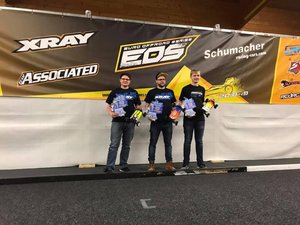 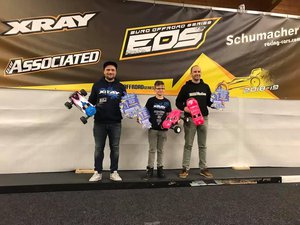 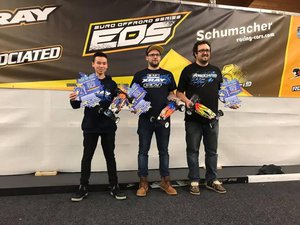