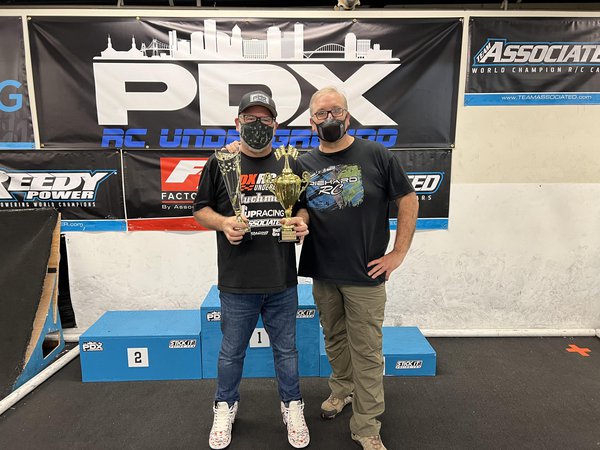 This past weekend two of the largest carpet racing programs in the Northwest collaborated and started the 1st Annual Interstate Series. The first of the two race series was hosted at PDX RC Underground in Portland. With over 150 entries, this turned out to be a bigger event than both Diehard and PDX expected.

Brett and Brenda Wilson the owners of Diehard RC and Kevin Focht the owner of PDX RC Underground have wanted to do a series together for years, but the original PDX location was too small. With the new location, Brett and Kevin decided to give it a go, and it was a huge success.

“We are hoping that more tracks will start to work together to grow this hobby we all love so much, instead of fighting with each other” Focht said.

After round 1, PDX took the overall for the team with a score of 38 to 18 with points scored for 1-3 in all classes. Kevin got the better of Brett in round 1 too, placing higher in both 40 plus and stock truck.

Round 2 will be at the Diehard facility in April, i’m sure Diehard RC will turn the tables with it being on their home track.

Everyone was a winner with this series. Two great programs, leading the way in Interstate racing!

Find out more about the two programs https://www.diehardrc.com and https://www.pdxrcunderground.com