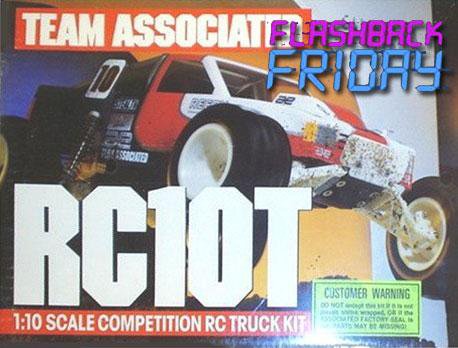 Everybody knows that Friday is meant for reminiscing old times. Each week we take you back in time as we flashback to some of R/C racing's greatest moments, products, drivers, and more!
Flashback: 2011
A complete timeline of Team Associated RC10T stadium trucks
The U.S. has long had a love affair with pickup trucks, and it wasn’t long after the original RC10 revolutionized 2WD off-road buggy racing that Americans started modifying their single-cockpit kits to look more like the full-fendered vehicles they were using to carry their gear to and from the track. They were most often referred to as “monster trucks” when the class caught in in the late 1980s, like when the Team Losi JR-XT hit hobby store shelves in 1989, but the class quickly modeled itself after the premier Grand National truck class of the Mickey Thompson Entertainment Group short course races that were held in sports arenas across the country.
All photos not otherwise attributed are courtesy of Team Associated.
Team Associated waited until 1991 to venture into the stadium truck class, debuting its RC10ST — for Stadium Truck, of course — prototype with a 1-2 finish at the Florida Winterchamps. 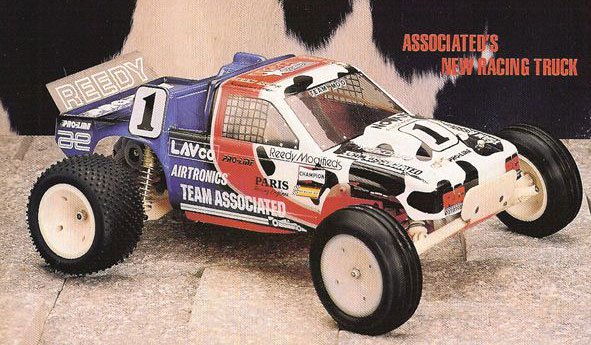 Photo: RC Car Action
It wasn’t just an RC10 with a different body; the ST had a powder-coated tub chassis that helped provide a wheelbase more than a half-inch longer than the buggy, with a narrower front kick-up plate protected by a nylon mini bumper to accommodate the travel of the extra-long front A-arms. The steering bell cranks were made stronger, with a built-in servo saver, and the universal driveshafts were made longer to span the length of the extended rear arms. This truck was fitted with a carbon fiber brace atop the Stealth transmission, and above that sat a taller rear shock tower with long rear team shocks. Even though the truck used larger rear tires, the rear hub carriers had more toe-in than the buggy. Finally, three-piece wheels were used to lock the beads of the tires in place. 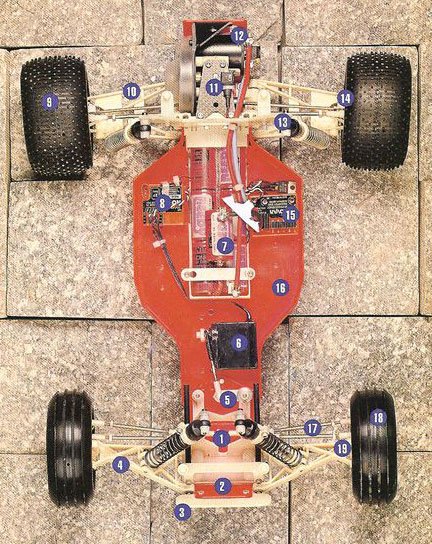 Photo: RC Car Action
Team Associated drivers found that using narrow front tires, like those on 2WD buggies, improved steering on certain surfaces and there was no rule against them at the time. However, in 1992, ROAR and the manufacturers agreed to outlaw the narrow front tires and stick with the same width at both ends. 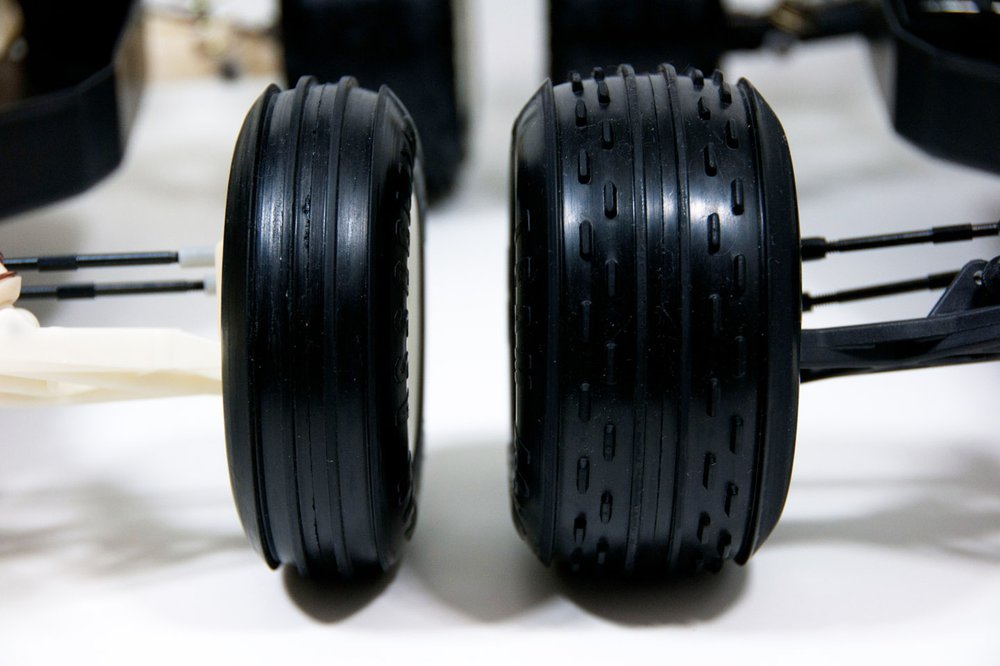 Photo: mario, via RC10Talk
RC10T - Released in 1991
The first RC10T was released to the public in 1991, with a black-anodized aluminum tub chassis in place of the powder-coated piece found on the RC10ST prototype; Team Associated drivers had tested chassis similar to that found on the RC10 Graphite but preferred the tub design like that used on the RC10 Team Car. The original RC10T Truck kit was sold until 1992, when Team and Sport kits were introduced; the Team kept the original’s hard-anodized shocks and bearings, while the RC10T Sport used gold-anodized dampers and bushings and came with a mechanical speed control and brushed motor. There were two major running revisions in the RC10T’s four-year reign, which ultimately yielded stronger suspension arms, revised rear suspension blocks and hubs to move the toe-in angle inboard, various small suspension geometry changes, a narrower body, universal driveshafts instead of regular dog bones, and one-piece wheels that required glue. 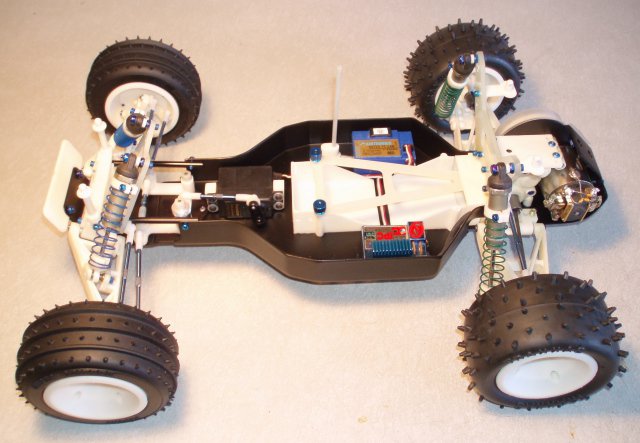 Photo: *Chrominator, via RCTech
(truck fitted with later-model electronics and optional blue hardware)
All versions of the RC10T came with a black tub chassis and white suspension components until the late kit runs of the RC10T Sport, which had black suspension pieces. The box art mimicked the MTEG Grand National trucks jumping down from the peristyle atop the Los Angeles Coliseum (called “California Stadium” on the box), and is my favorite RC imagery of all time. 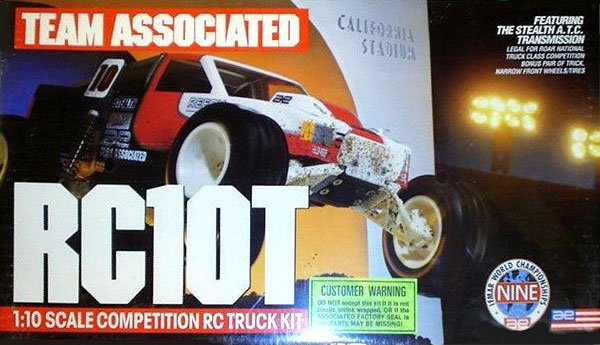 Photo: Team Associated RC10T Vintage Showroom, via Facebook
RC10T2 - Released in 1995
The second-generation RC10-based truck, the RC10T2, debuted in 1995 - but unlike the RC10B2 that Matt Francis drove to the World Championship that year, it was built on a hard-anodized 2024 aluminum tub chassis rather than a molded composite piece. The chassis was designed to be more rigid, and offer higher side clearance. 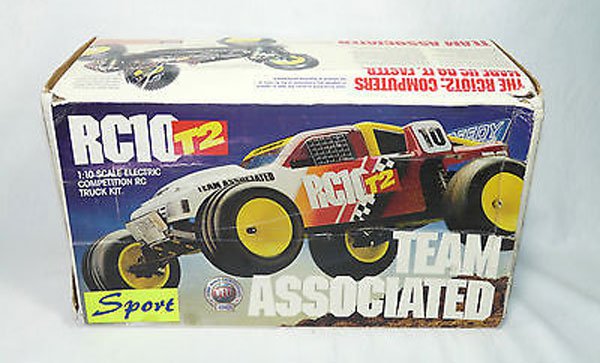 Photo: Terapeak.com
Like the RC10T, the T2 was sold in two versions: the Sport, with bronze bushings, gold-anodized shocks, three-piece wheels with harder tires, dog bones with stub axles, a mechanical speed control and brushed motor; and the Race kit, which had new steel universal driveshafts, hard-anodized shocks. 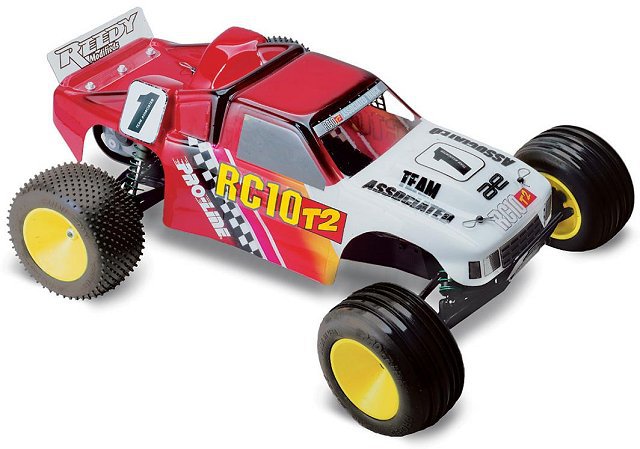 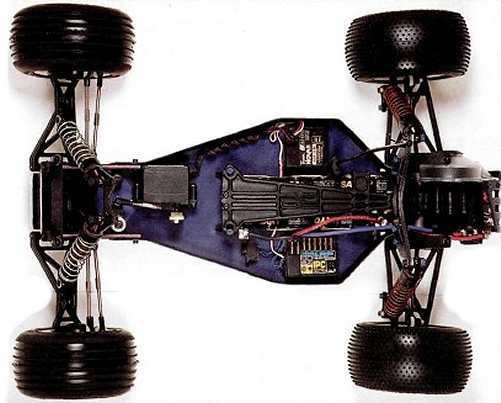 Photo: RC Scrapyard
RC10T3 - Released in 1997
Two years later, and actually a few months before the RC10B3 (and corresponding conversion kit for the B2) hit the scene, the third-generation RC10 truck — and first to use a molded chassis — was introduced. 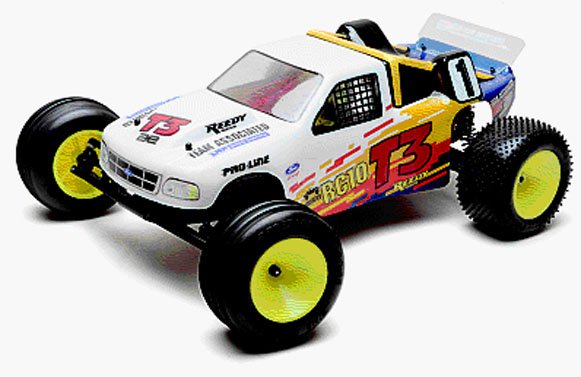 T3 Team Kit
Photo: flipsk8r25 via oocities.org
The reinforced tub was slightly longer than that on the B2/B3, but the Stealth 2.4:1 transmission was exactly the same except for the addition of a new slipper clutch with larger pads. The major update for the B3 over the B2 was the use of equal-length arms at both front and rear, and the T3 also received this Quadrasymmetric concept with a kingpin front ball-stud setup and rear hubs that had more adjustment options that on previous RC10T’s. Finally, the rear shock bodies were lengthened from 1.32 to 1.39 inches for additional shock piston clearance at full compression. 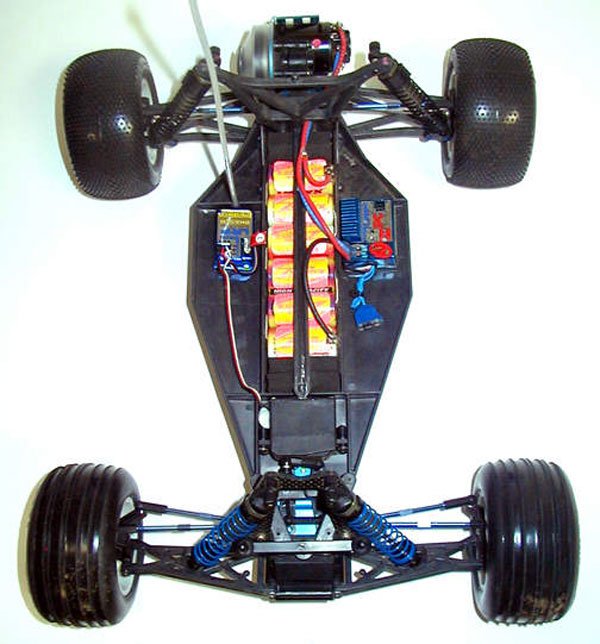 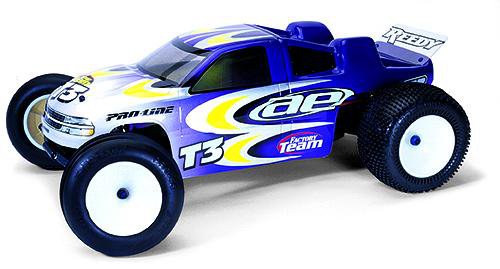 The T3 Factory Team Kit photo truck used Scott Hughes’ paint job.
RC10T4 - Released in 2003
The T3 remained Team Associated’s top truck for over a half-decade, but the T4 proved worth the wait as the platform eventually won eight ROAR modified-class national championships. Whereas the T3’s footprint was smaller than its competition, the T4 had a longer wheelbase and was a 1/2-inch wider. 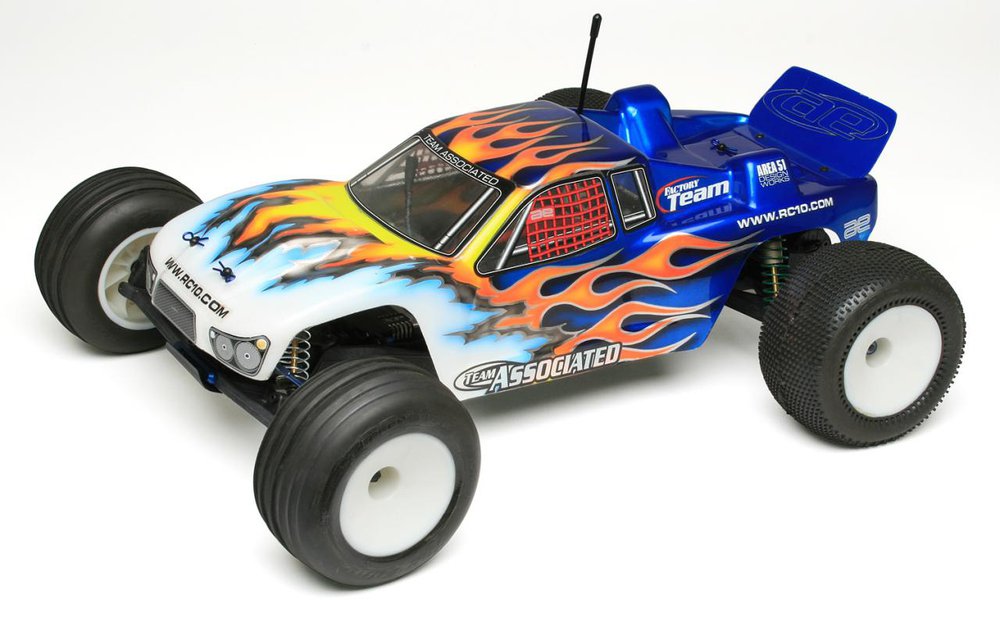 Part of that extra length came from the forward-swept front suspension arms, which were damped by shocks fitted behind the shock tower like that of the B4 buggy on which it was based. The truck’s design emphasized lower mounting positions for the motor, battery, shocks and body. The chassis used the B4’s angled bell crank steering system as well as the dual-disk slipper clutch and 2.6:1 Stealth lay down transmission fitted with the high-capacity ball differential from the nitro-powered RC10GT. The T4 was first released as a Team Kit, which used hard-anodized shocks, MIP CVD rear axles and sealed ball bearings, while the later Factory Team Kit also included carbon composite chassis, suspension arms, battery brace and top brace as well as blue aluminum options. The T4 was the first, and still only, Team Associated stadium truck to be offered as a Ready-To-Run, eventually including a variety of combinations of running gear and vehicle updates, including T4.1, T4.2 and T4.3 versions. 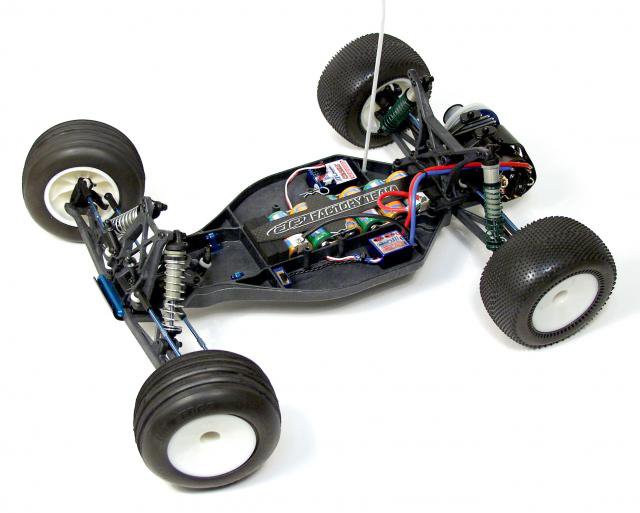 RC10T4.1 Factory Team - Released in 2010
The T4’s tenure was even longer than that of the T3 it replaced, as the T4.1 update finally came out in 2010. The big changes came in the form of the V2 slipper clutch and hard-anodized shocks, along with Factory Team aluminum rear hubs. 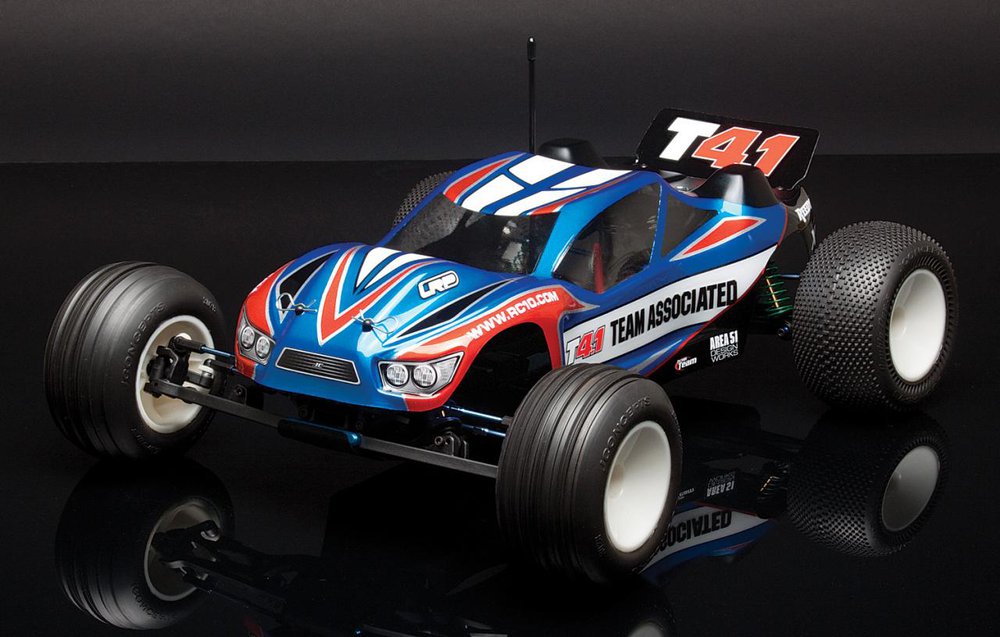 The suggested suspension setup was optimized for the lighter weight of LiPo batteries, and the T4.1 was the only RC10T to include aftermarket running gear from a company other than Pro-Line; the JConcepts Hi-Flow body, Cutters front tires and Double Dees rears completed the package. 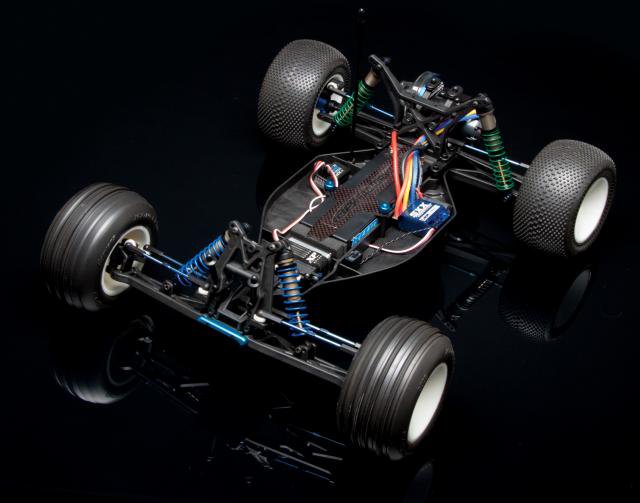 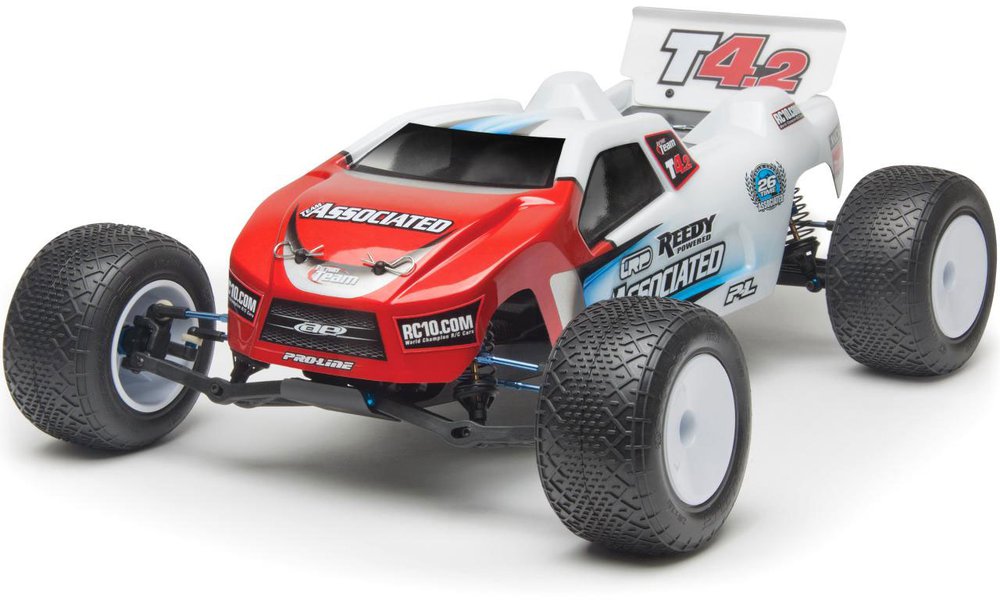 Finally, the T4.2 came with the new cab-forward Pro-Line BullDog body, but while the kit photos show Suburb tires they were not included. 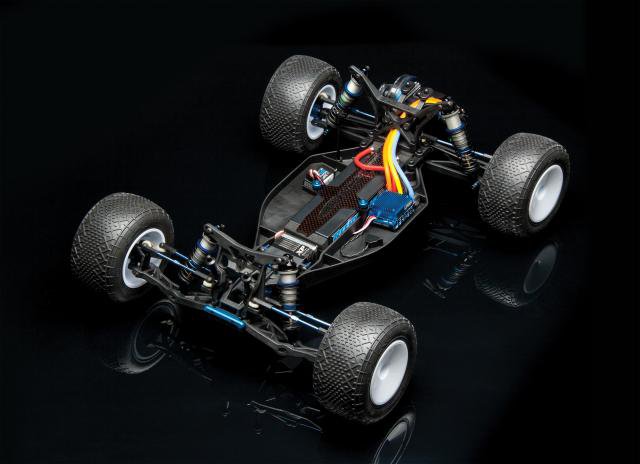 RC10T5M Team Kit - Released in 2015
The RC10T series returned to an aluminum chassis for the T5M, this time with a four-gear mid-motor transmission bolted to its hard-anodized plate made to fit saddle, standard and square batteries. Like the T4.2, the T5M included a Pro-Line body and is shown with tires that are not found in the box. 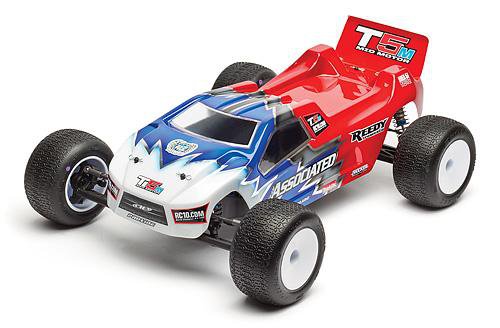 The 12mm big bore shocks were updated to V2 specs, and the T5M benefitted from the suspension of its buggy brother — particularly the inline front suspension with heavy-duty steering blocks and caster blocks with trailing axle option. Although there was also a traditional RC10B5 buggy, the company never did release a rear-motor T5. 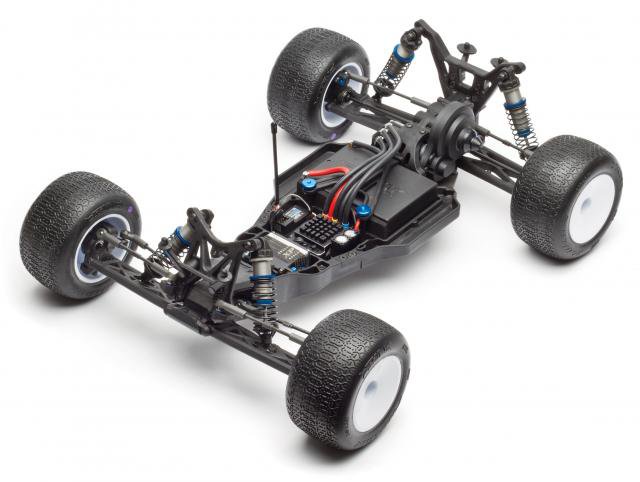 RC10T6.1 - Released in 2018
Team Associated released the B6 buggy just 16 months after the T5M, and the sixth-generation RC10T jumped straight to 6.1 specs only two months after the B6.1 and B6.1D announcement. 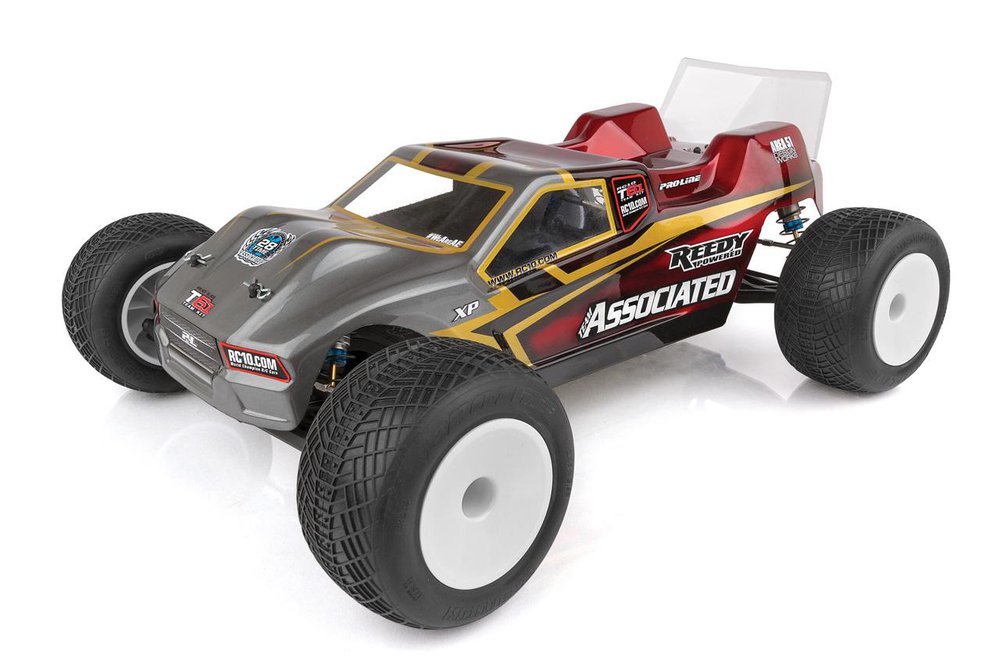 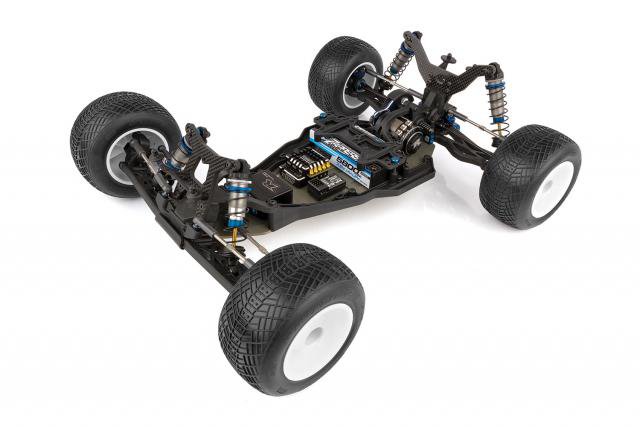 The original Team Associated RC10T provided a much-needed spark to set off the brand rivalry that fueled the off-road racing boom of the 1990s, and the incredible racing record of the T4 platform is rivaled only by the winning resume of the B4 buggy with which it shares many of its parts. Will the T6.1 revive a stadium truck class that has dwindled over the last few years? Only time will tell — but it will almost surely set the pace.
Team Associated Flashback Friday
Share:
blog comments powered by Disqus