FLASHBACK FRIDAY: All five tracks that have hosted the Silver State 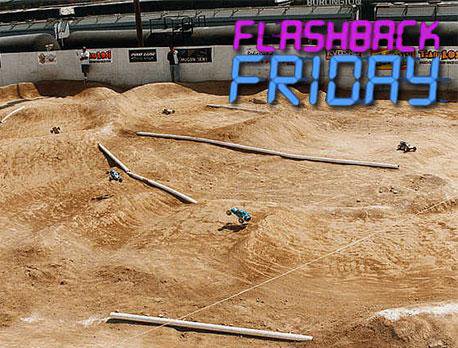 Everybody knows that Friday is meant for reminiscing old times. Each week we take you back in time as we flashback to some of R/C racing's greatest moments, products, drivers, and more!
Flashback: 1998
The tracks that have hosted the Silver State
One of the biggest pieces of news from this week was the announcement that Joey Christensen of The Dirt Racing has put together a deal with the South Point Hotel and Casino to keep the annual Silver State event alive in Las Vegas, Nevada. The city is one of the top tourist destinations in the U.S., making it a prime location for an RC race, and the Silver State - despite changing hands among a handful of promoters, featuring a number of different 1/10-, 1/8- and even 1/5-scale categories, and having been held at five different locations - has been running strong for twenty years.
Here’s a look back at the timeline of tracks that have hosted the Silver State:
Las Vegas Motor Speedway
Years hosted: 1998
The inaugural Silver State was held on a temporary course built on the grounds of the motocross facility at the Las Vegas Motor Speedway which was operated by Richard Saxton’s mother. Rain washed out most of the planned qualifying rounds, leaving Mark Pavidis in 66th place in 1/8-scale buggy after qualifying. He bumped up from the I-Main to win the whole thing! He also won the 1/10-scale stadium truck class from fifth on the grid.

Photo: RC Car Action
Western RC
Years hosted: 1999-2002
After the Silver State got on its feet, the race moved to the existing Western RC facility on the city’s outskirts. The track was nicknamed “The Junkyard” because it was actually built in some unused space in a junkyard. The first IFMAR World Championship for nitro 1/8-scale buggies held in the United States took place in 2000, but rather than at Western RC was held on a temporary track built in the parking lot of the old Silverton Hotel and Casino.
The race stayed at Western RC for a few years - including my first Silver State, in 2002 - before the owners of the junkyard decided to reclaim the area on which the track was built. This is where the race earned its reputation for having an extremely rough surface that broke down and evolved throughout the weekend. I remember the year that I went, the front left corner of the track had a raised tabletop on the inside of the lane that was barely the width of a vehicle, and the lower portion looked like it had been run through with a mountain bike tire and left to harden. Gnarly! The double jump in the center of the track wore so badly the lip of the take-off jump practically pointed backward. 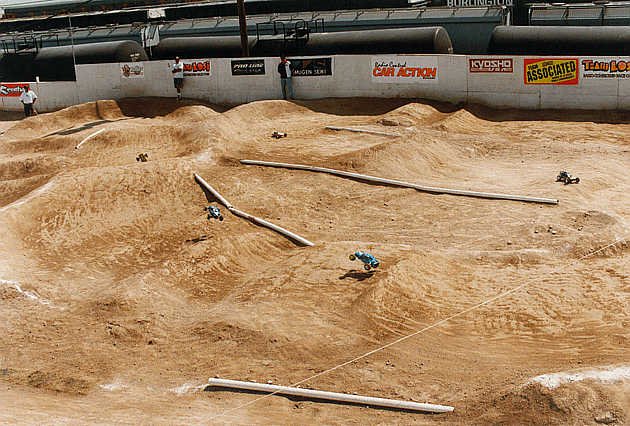 Photo: Team Associated
Silver Bowl R/C Raceway
Years hosted: 2003-2004, 2010
Named after the Silver Bowl Park in which it was located, a new off-road track was built adjacent to the paved oval and on-road course that had been there for a while and even hosted some major electric and nitro racing events. Before the 2003 Silver State, a warm-up race was held to allow drivers to check out the new track. We jokingly called it the “Salad Bowl” - apparently, the dirt used for the course had come from an outdoor driving range, and despite the track crew sifting out several 80-gallon drums of golf balls we found all sorts of non-dirt items in the track surface throughout the weekend: rocks, golf balls, trash, tattered clothing items, rebar, even the occasional animal bone. The wind often ripped through the Silver Bowl facility, and inspired many nitro racers to start keeping motocross goggles in their radio boxes. The 2004 ROAR Fuel Off-Road Nationals were also held at the Silver Bowl, and then the race moved again. The race returned to the Silver Bowl in 2010 to a much-different environment, as the open desert behind the drivers’ stand had been taken up by a massive new housing development. According to Google Maps, the track is still there. 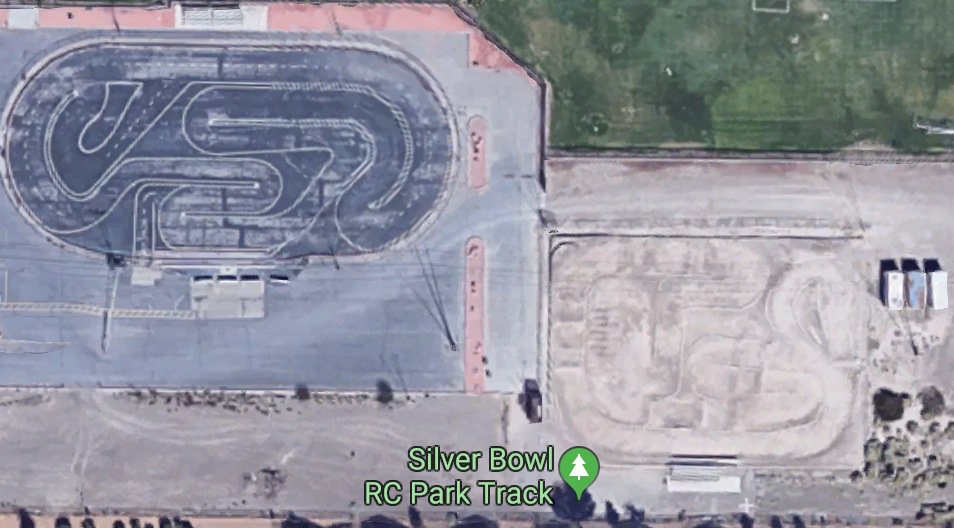 Photo: Google Maps
Boulder City R/C Raceway
Years hosted: 2005-2009, 2011-2014
Located next to a massive quarter-scale oval course, measuring at 600 feet long with 30-foot wide lanes, the Boulder City off-road track was built in time for the 2005 Silver State. It also wasn’t in Las Vegas, but instead about a half-hour outside the city. The most notable feature of the off-road track is the drivers’ stand and pit lane, which are built on a large hill alongside the track. The first year of the race, the back straightaway was built on the native dirt which had been tilled for maximum fluff - and while the first few practice heats were awesome, by the end of day one had car-swallowing holes. I remember taking a picture with an old flip phone after the trophy presentation one year where my whole 1/10-scale nitro stadium truck fit inside one of the craters, and all you could see sticking out was the antenna tube! The first-ever ROAR Fuel Off-Road Truck Nationals — which included 1/10-scale nitro stadium truck, monster truck, and 1/8-scale nitro truck — were also held at Boulder City in 2006. In 2008, gas-powered 1/5-scale buggies raced on the same track as the nitro vehicles, with jumps that were covered in carpet. After the one-year return to the Silver Bowl in 2010, the Silver State returned to Boulder City until RC Tracks of Las Vegas was built. Boulder City R/C Raceway is still visible on Google Maps. 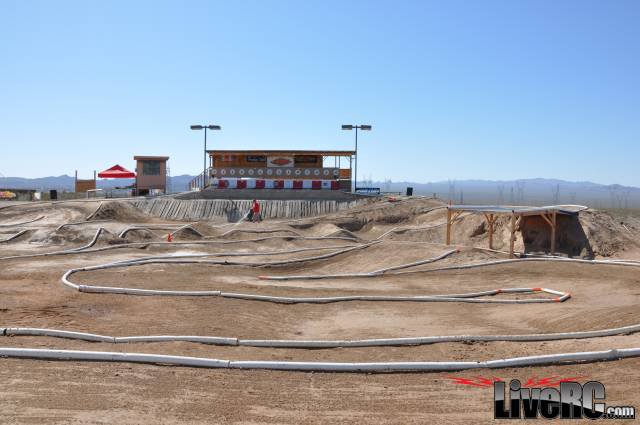 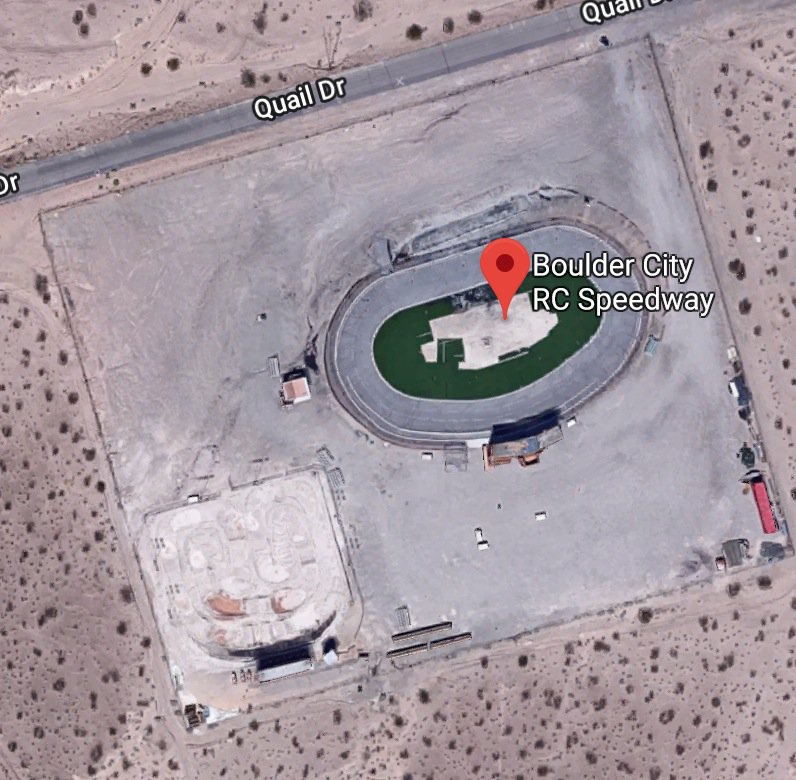 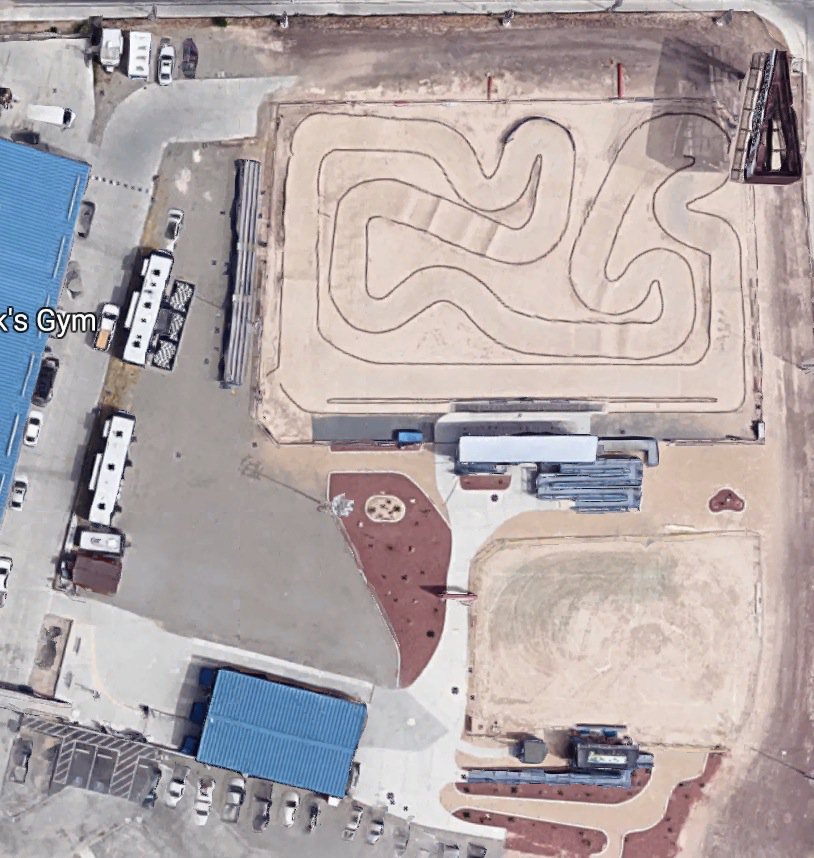 Photo: Google Maps
As the Silver State turns the appropriate age of 21, it’s moving back to a temporary track — perhaps located in an area that could potentially draw more foot traffic than ever before. Here's a rendering from The Dirt Racing of what the arena might look like.

Which of the Silver State tracks was your favorite? Are you excited about the move to the South Point Hotel and Casino? What do you think about hosting a major event on a temporary track? Let us know in the comments below, or on Facebook!
Flashback Friday
Share:
blog comments powered by Disqus