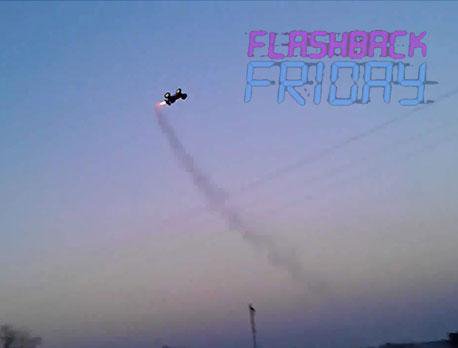 Everybody knows that Friday is meant for reminiscing old times. Each week we take you back in time as we flashback to some of R/C racing's greatest moments, products, drivers, and more!
Flashback: 2009
Psycho Nitro Blast big air jumps
The first Psycho Nitro Blast - with its spooky haunted house theme, extreme track layout, and round-the-clock practice schedule - was first held in 2008. The environment was instantly a hit with RC racers around the Southeast and beyond, and the event has been a staple of the nitro off-road calendar ever since.
When the PNB rolled around for its second year, a second tradition was born - the big air jump. Adam Drake and Alan Burton, then teammates at Team Losi Racing - decided to take a shot at the Guinness World Record for the longest RC car jump by building up their 1/8-scale buggies to hit a wooden ramp that was placed in the street outside the arena hosting the event.
By the following year, though, the goal of achieving maximum distance gave way to maximum spectacle. The Drake rigged his buggy with model rocket engines activated when the throttle servo reached full throttle - and the fireworks were incredible.
Here are replays of all of the crazy PNB jumps I could find: