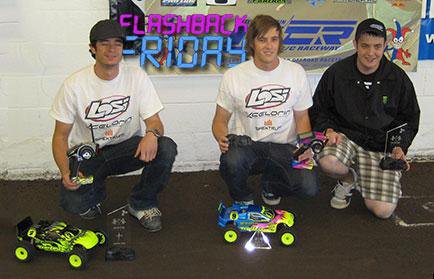 Everybody knows that Friday is meant for reminiscing old times. Each week we take you back in time as we flashback to some of R/C racing's greatest moments, products, drivers, and more!
Flashback: 2009
Dustin Evans and Joel Eaton won the Modified classes at the 21st annual April Fools Classic
Celebrating its 29th straight year of competition, the April Fools Classic is one of the longest-running races in the RC scene. The popularity of the annual event at Murph’s Intermountain RC Raceway among the factory teams has waxed and waned over the years, with periods throughout the 90s and 2000s that drew major press coverage and the industry’s top pros - like Brian Kinwald, Mark Pavidis, and Matt and Mark Francis. Though the state of Utah itself is home to hotshots like former Reedy Race Open 4WD winner Rob Gillespie Jr. and long-time factory star Joel Eaton, the podium finishers in the elite Modified classes have often included racers from nearby states like California, Washington, Colorado and Arizona.
LiveRC has streamed the event since 2014 - and you can to watch this year’s race, too!
Click here: murfsircr.liverc.com/live/
I dug around the Internet for a while to find information about the history of the race, and the earliest I could find reliable information was for 2009 - from an old Losi blog written by Matt Chambers, one of three Colorado natives whose stock was rising rapidly in the mid- to late-2000s. Chambers had scored a stock-class national title in 2004 that earned him a ride with Losi, and he was joined by Dustin Evans in 2007 after the future Reedy Race champ had been racing for only a year. Then-19-year-old Kody Numedahl was in his second year of college, and had been racing for Team Associated for three years.
The industry was going through some changes, too - 19-turn brushed motors used for a “super stock” class had various success for a couple of years, though by 2009 the industry had begun its transition toward brushless power and LiPo batteries. In fact, Horizon Hobby - which had begun rebranding “Team Losi” entry-level vehicles as “Losi” and then separating the race products under “Team Losi Racing” - chose the movement toward the new power systems as the proper time to launch the Losi Xcelorin lineup of motors, batteries and ESC’s. Spektrum’s DX3R radio had signaled the beginning of the end for long FM transmitter antennas as the first standalone 2.4 GHz radio system to catch on with racers. As for cars, Team Losi Racing drivers were using the XXX-CR, XXX-T CR and XXX-4, while Team Associated was still driving the B4 and T4 and B44 - the .1’s weren’t released until the following year.
Here’s what Matt wrote about the race eight years ago:
“While the rest of the Losi team was off battling dust and wind at the Silver State race, Dustin and I were racing hard at the April Fools Classic in Magna, Utah. This year’s track was very smooth and fast. I felt very good in all classes, especially 2WD. Traction was very good and the Losi cars seemed to have an advantage on the IR/CR track. Dustin ended up TQ in 2WD and Truck. In Truck, Dustin won A1 and A2 to take the overall win and I won A3 to finish 2nd overall. In 2WD, I made a daring pass on Dustin to take the win in A1 and he proved his consistency by winning A2 and A3 to take the overall win; I again finished 2nd. In 4WD modified we both felt very confident with our XXX-4’s, but a difficult jump section proved to be the downfall for the both of us as we suffered from breakage in the mains. Luckily, IR/CR local and Losi team driver Joel Eaton was on fire in the main events - winning A2 and A3 mains to clench the victory!
Congrats to Joel and Dustin for making it a Losi sweep of the modified classes at this years April Fools Classic!”
As I was putting this story together, I shot Matt a message on Facebook and asked him if he remembered the race weekend. Here’s his reply:
“That was a long time ago - I vaguely remember it. I was really fast in 2WD and could have won, but made some dumb mistakes. I did make a killer comeback and pass on Willardson in either A2 or A3 to get 2nd overall. I had won 2WD in 2007 and thought I could do it again in ’09, but it just didn't work out. IRCR has always been one of my favorite tracks and I always did pretty well at the April Fools Classic.”
Here are the podium finishers that year - including their home state, the car and motor/ESC combo they were driving. 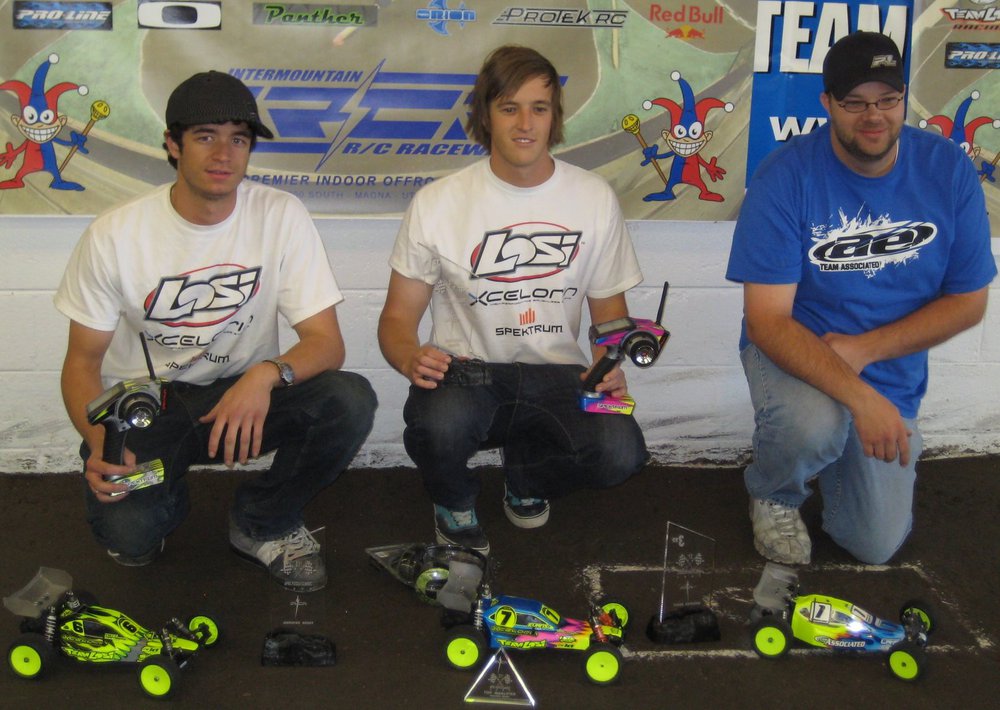 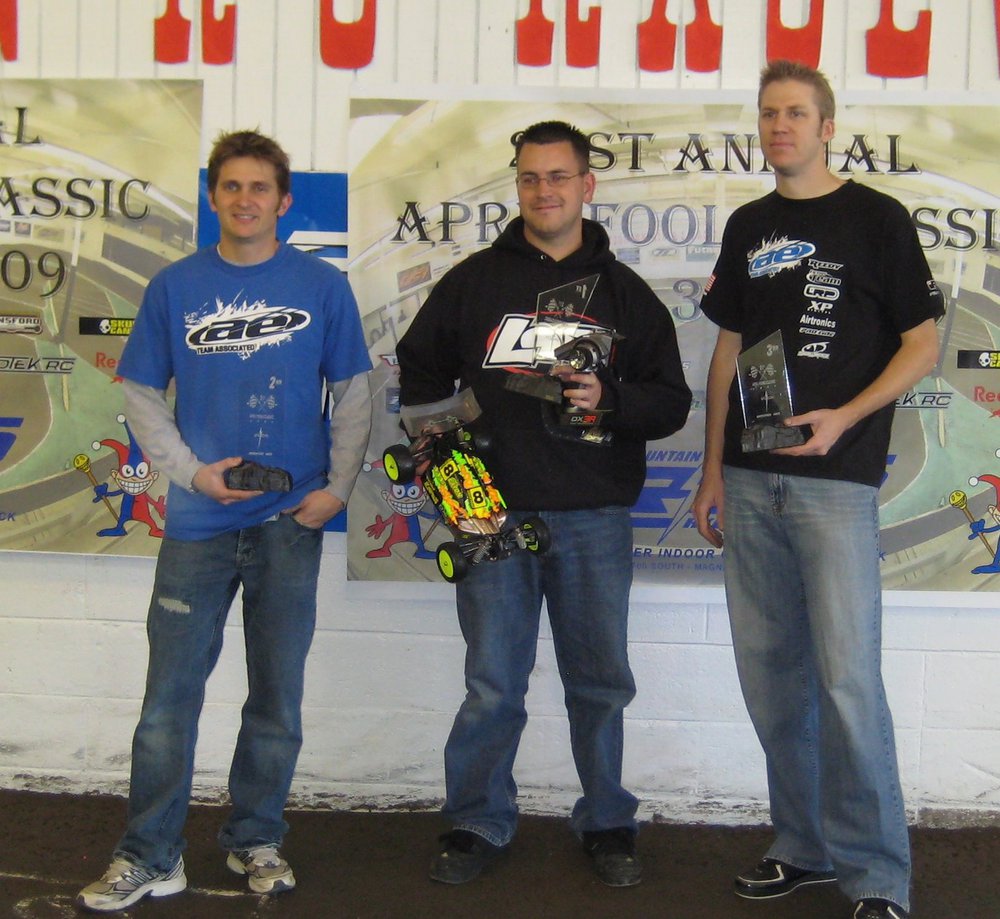 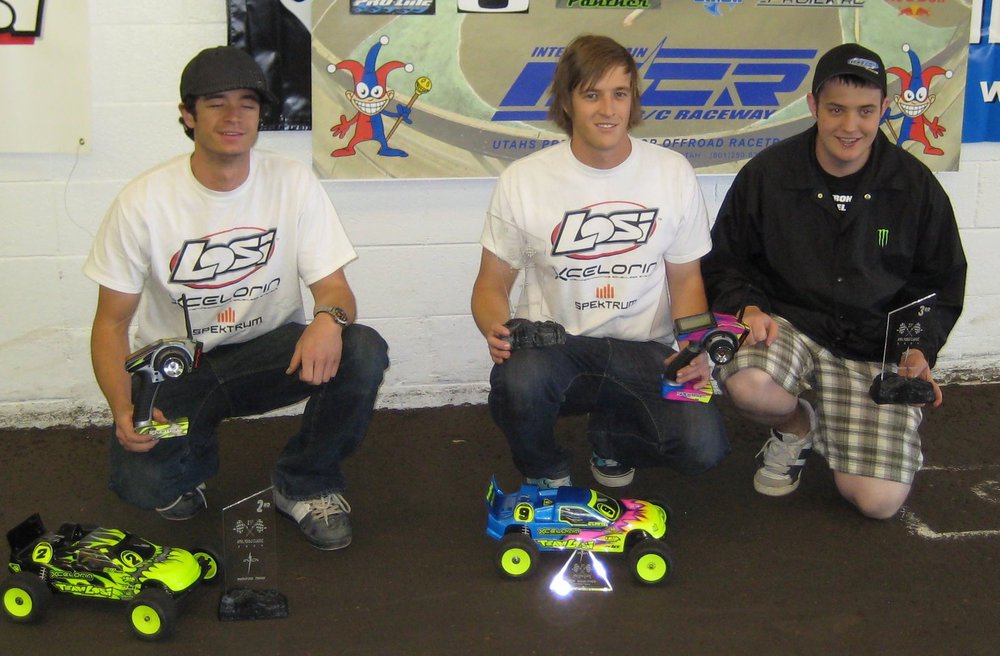