FLASHBACK FRIDAY: How have Reedy Race Open winners fared in the Invitational class? 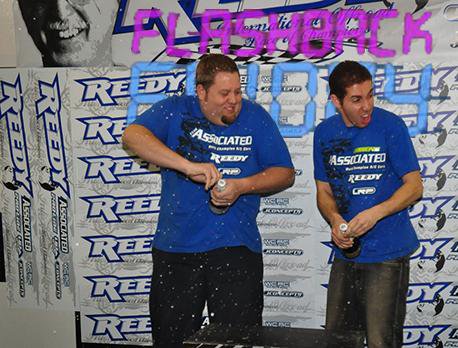 Everybody knows that Friday is meant for reminiscing old times. Each week we take you back in time as we flashback to some of R/C racing's greatest moments, products, drivers, and more!
Flashback: 2011
Open 2WD and 4WD class winners of the Reedy Race of Champions
The Invitational class is, deservedly, the focus of every Reedy Race of Champions. The competitors are selected based on the results of Worlds, Nationals, Euros, and Japanese Nationals, and then the grid is filled with drivers who are hand-chosen as the best alternates. Those 30 drivers then duke it out over twelve rounds of heads up racing over three days to determine the winner - and it’s the most intense RC race on the planet.
The Open 2WD and 4WD classes, however, showcase some of the best up-and-coming talent by giving the limelight to drivers who’d otherwise simply be fighting for a spot on the A-Main grid. It’s such a popular event to attend that a lottery is used to determine who, out of a pool of hundreds of hopefuls, gets to enter. With the likes of Cavalieri and Cragg, and Maifield and Martin sequestered in their own contest, the door is left wide open for someone that might not yet be nationally known to score the biggest victory of their career - as well as a ticket to the following year’s Invitational.
As competitive as the Open classes can be, they’re still treated like an undercard. With so much Invitational action everyday, the media typically only has time to focus on the big show - and good luck finding archives of Open winners from the first 15 Reedy Races. Just because they were “the best of the rest” doesn’t mean the Open class winners are totally prepared to race heads-up against the best in the world, however - and while some Open champs have gone on to form incredible racing careers, others have been long forgotten. Here’s how the 2WD and 4WD Open champions from the last five years have stacked up in the most exciting race in RC:
2011 Open Class Champions:
2WD - Shaun Dunlap
4WD - Tanner Denney
When the Reedy Race of Champions was rebooted in 2011 after a decade off (besides the 2009 pilot in Japan), the hype surrounding the Invitational class was intense. Shaun Dunlap, a Team Orion-powered Kyosho driver from Oregon - and Kyosho/Orion team manager Joe Pillars’ brother-in-law - won the 2WD class. The following year, Dunlap finished tenth in the Invitational class! It turned out to be his only time racing in the Invitational category - and he retired from RC racing at the end of 2014. 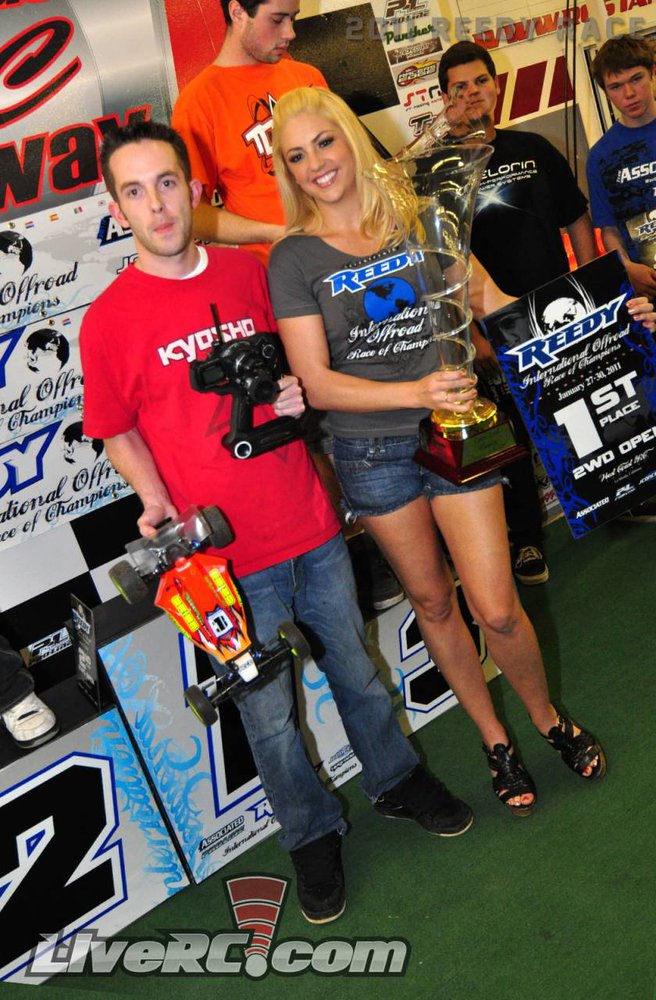 At just 15 years old, Arizonan Tanner Denney won the 4WD Open class over heavy competition. He finished 22nd the following year, 19th in 2013, and his best finish - 15th - in 2014. Last year, he was 27th. Denney will once again compete in the Invitational class next week, marking his first major event with Team Losi Racing and Team Orion.

2012 Open Class Champions:
2WD - Chad Due
4WD - Josh Numan
Wisconsin native Chad Due won the 2WD category in 2012 with his Reedy-powered Team Associated buggy. The following year he finished 23rd, and he did not compete in Invitational in 2014. Last year, Due was once again chosen to enter the Invitational category - and finished 16th. He’s back in the Open class next week. 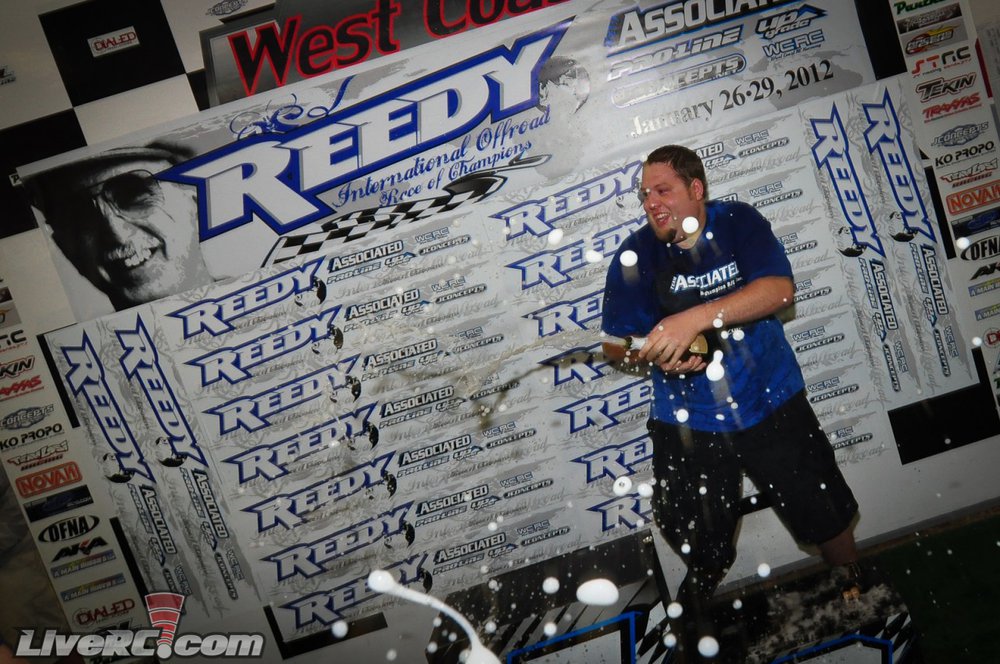 After finishing second to Denney in 2011, Southern California resident Josh Numan scored the 4WD Open victory in 2012 while racing for Team Associated and Reedy. He backed it up by finishing 14th in 2013, far outshining Due, but it turned out to be his only Invitational - he hung up his radio for good later that year. 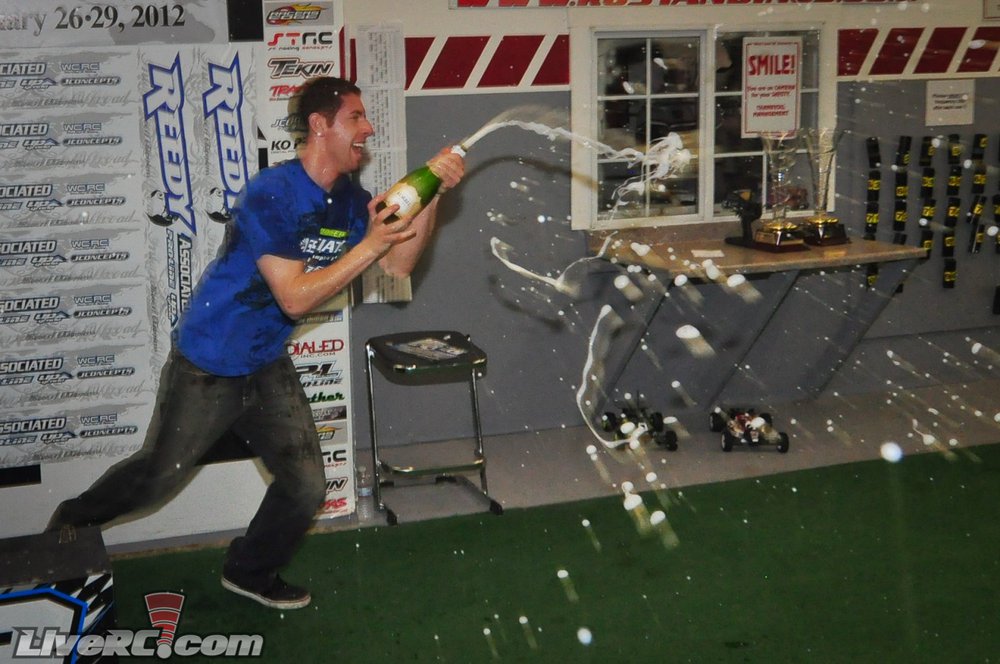 2013 Open Class Champions:
2WD - Carson Wernimont
4WD - Rob Gillespie, Jr.
SoCal native Carson Wernimont stormed to the 2WD title with a Reedy-powered Schumacher buggy in 2013. He finished 17th in 2014, then recorded a career high of ninth last year during his short tenure with Team Associated and Reedy. He’ll be back in the Invitational next week as a member of the Yokomo team. 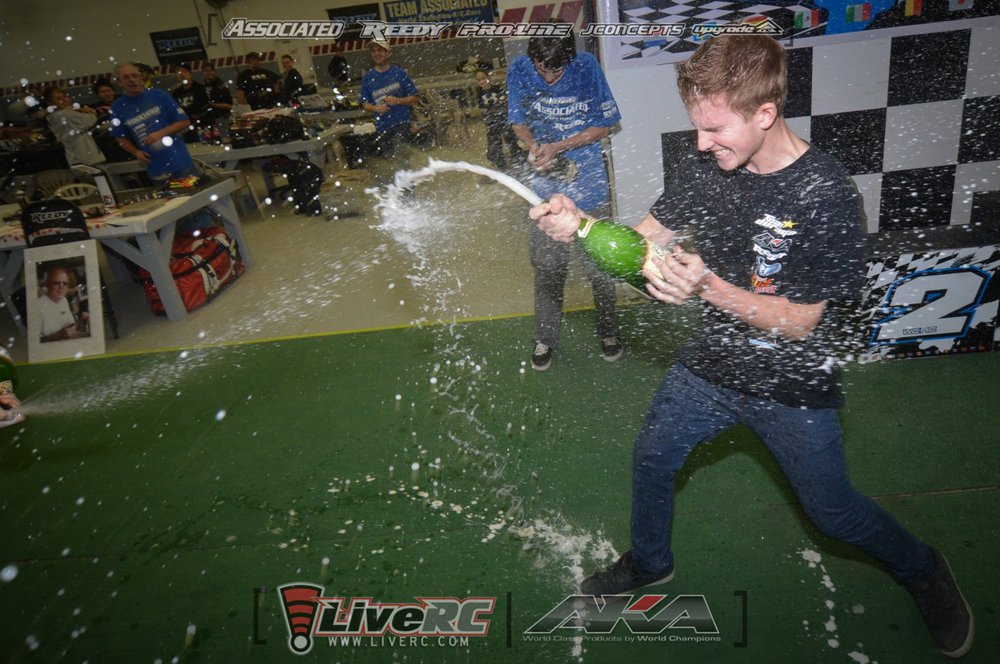 Utah’s Rob Gillespie Jr. had the run of his career to win the 4WD class in 2013 and ended up just a few spots lower than Wernimont the following year, in 20th. He returned to the Open categories in 2015, where he finished in the runner-up spot in 4WD, and he’ll be back in the Invitational class next year - still as a member of Team Associated and Reedy. 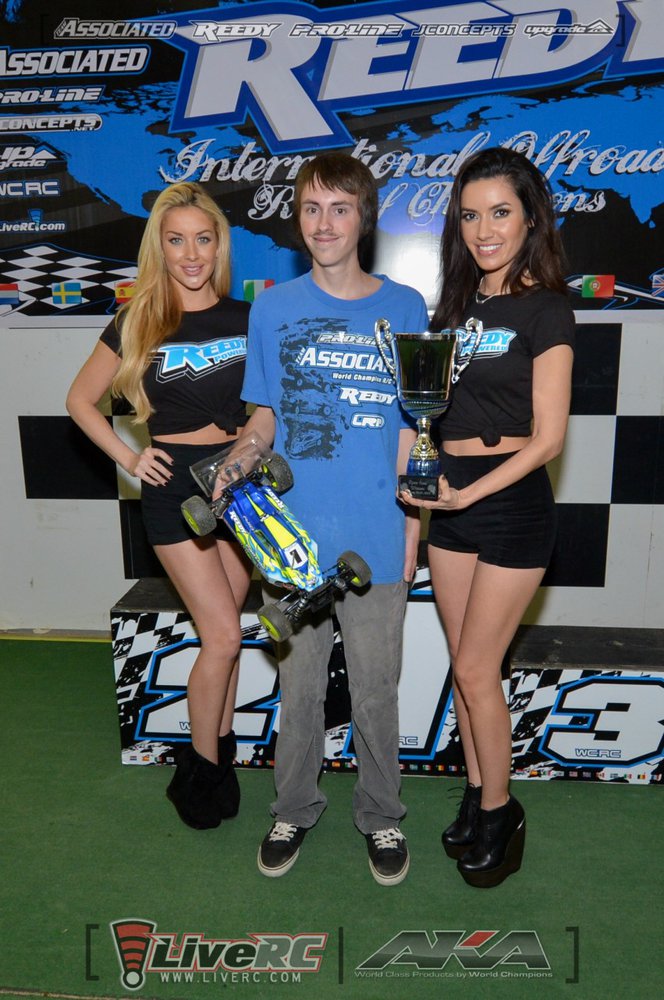 2014 Open Class Champions:
2WD - JP Richards
4WD - Spencer Rivkin
Ohio’s JP Richards drove his Viper-powered TLR buggy to the 2WD win in 2014, then finished 17th last year. Having switched to Team Durango with Maclan Racing power for this season, Richards is back in the Open class.

Spencer Rivkin put the world on notice that he’d be a star by winning the 4WD class in 2014. Last year, he finished eighth - the best finish for a former Open winner in the modern era. Of course, he won the IFMAR Worlds in 2WD ten months later - and the now-17-year-old from Arizona enters next week as one of the early favorites. 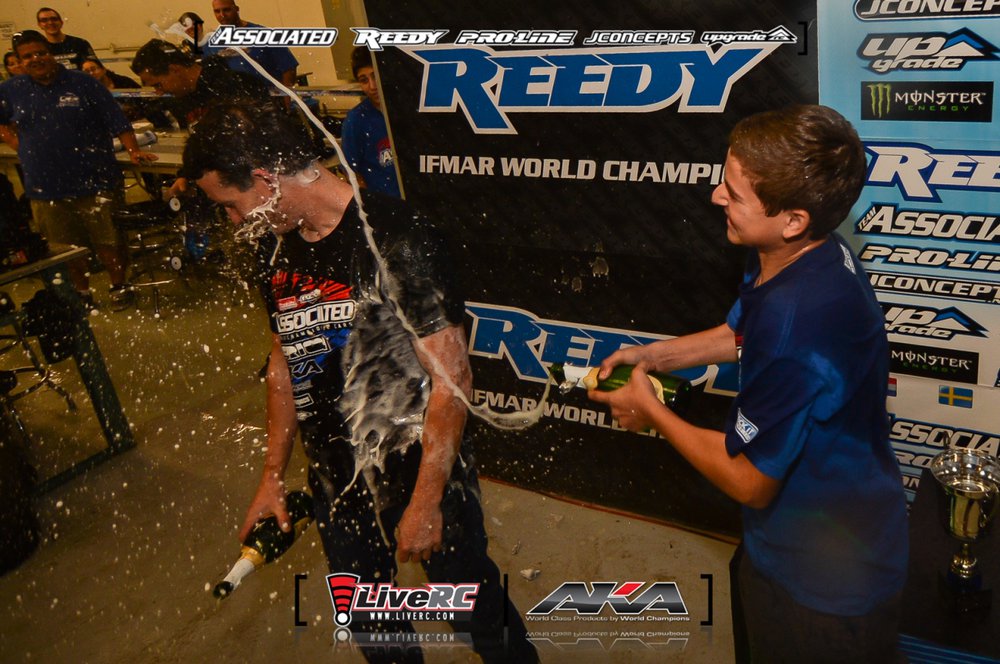 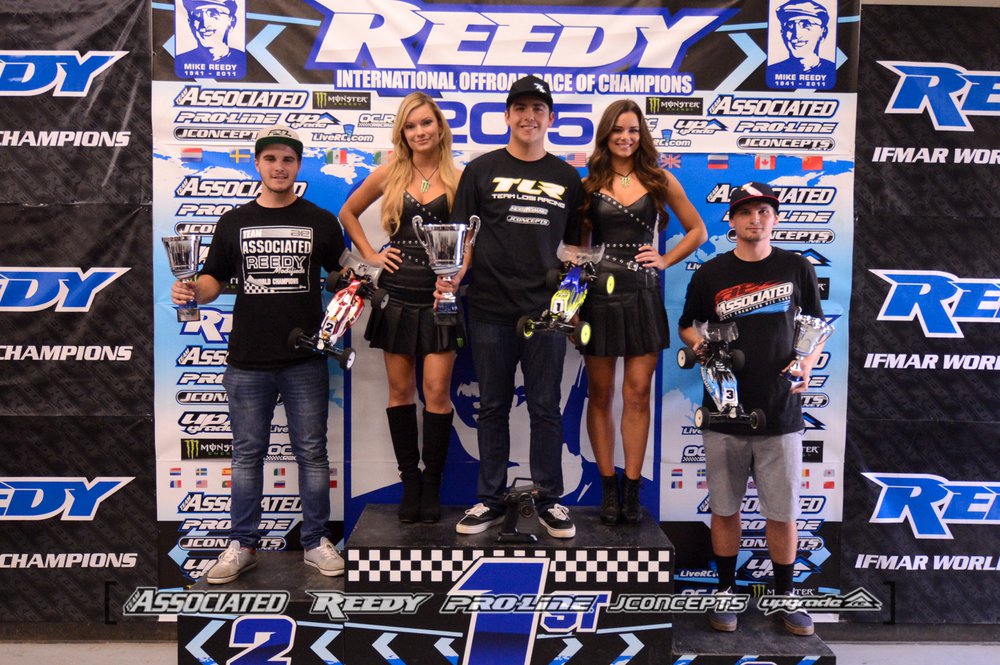 After finishing second behind Motter in 2WD, Australian Team Associated/Reedy driver Kyle McBride smoked the rest of the field in the 4WD category to take a relatively uneventful win. 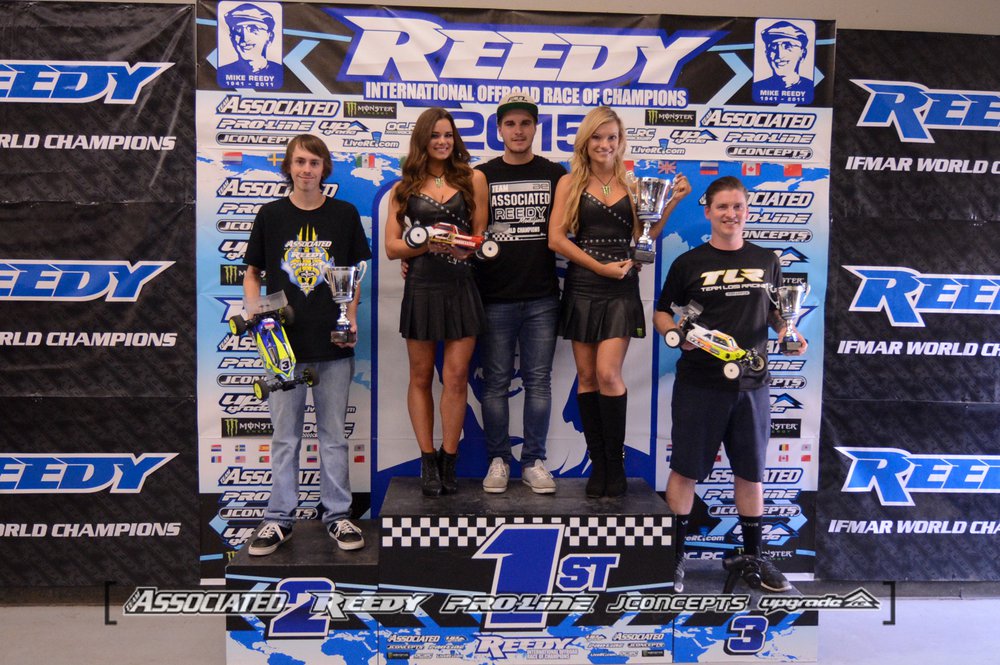 Which of last year’s winners will be more successful next week? History is evenly split when it comes to the former 2WD winner finishing better than the previous 4WD champ. Both drivers did well in both classes last year, with McBride having the slight edge - first in 4WD and second in 2WD, versus the 2WD win and a seventh-place finish in 4WD for Motter.
We’ll find out next week - after twelve rounds of racing.
Flashback Friday
Share:
blog comments powered by Disqus