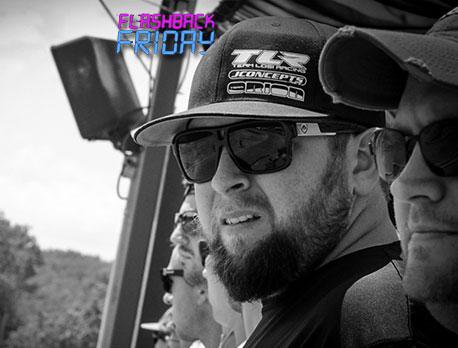 Everybody knows that Friday is meant for reminiscing old times. Each week we take you back in time as we flashback to some of R/C racing's greatest moments, products, drivers, and more!
Flashback: 2015
ROAR Electric 1/8-Scale Off-Road and 4WD Short Course Nationals
Just over a year ago, on July 10-12, Lost Creek R/C Raceway in Oakland Mills, PA - otherwise known as LCRC - hosted the ROAR National Championship for 1/8-Scale Electric Buggies and Trucks as well as the 4x4 Short Course class. Over 260 entries - over 180 of which were entered in the Buggy category - competed at the event, firmly solidifying the 1/8-Scale Electric Nationals as one of the nation’s major races of the yearly travel schedule.
DON'T MISS A LAP OF THE 2016 ROAR ELECTRIC 1/8-SCALE
OFF-ROAD AND 4WD SHORT COURSE NATIONALS
Click here to watch the race live from Stateline R/C in Fremont, IN! 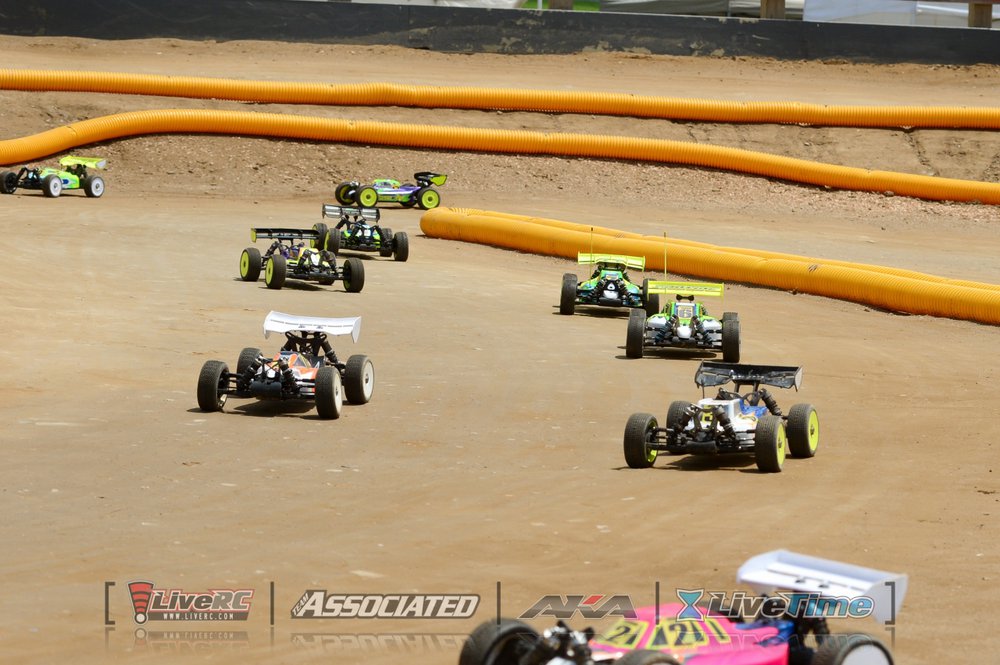 Dakotah Phend earned the Top Qualifier spot in the 4x4 Short Course class and won both of the first two A-Mains by over four seconds each, continuing his incredible domination of the category - he won the title in 2011, 2013, and 2014. Only teammate Ryan Maifield, who won in 2012 with Team Associated, broke Phend’s incredible streak. 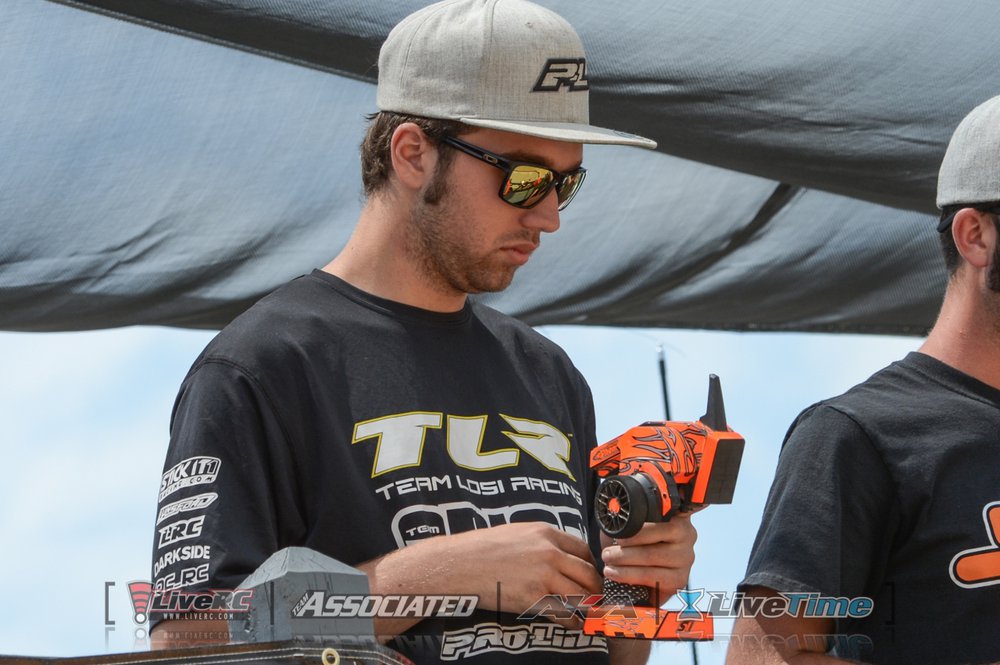 Maifield finished second in the first two A-Mains and won the third to earn second overall, with Ryan Lutz rounding out the podium with a third-place finish in A1 and a second-place in A3. 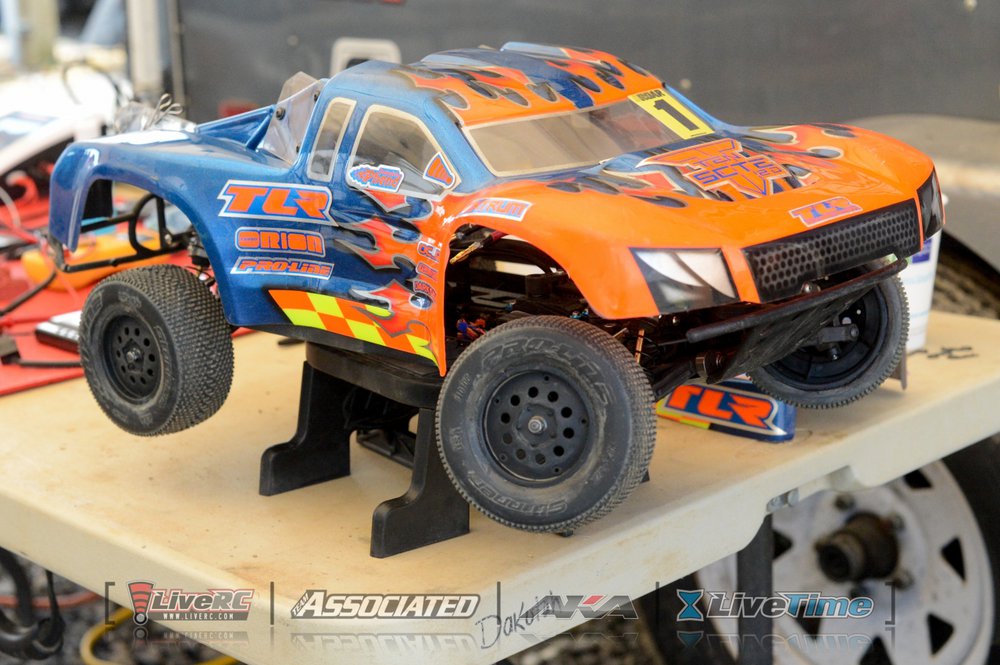 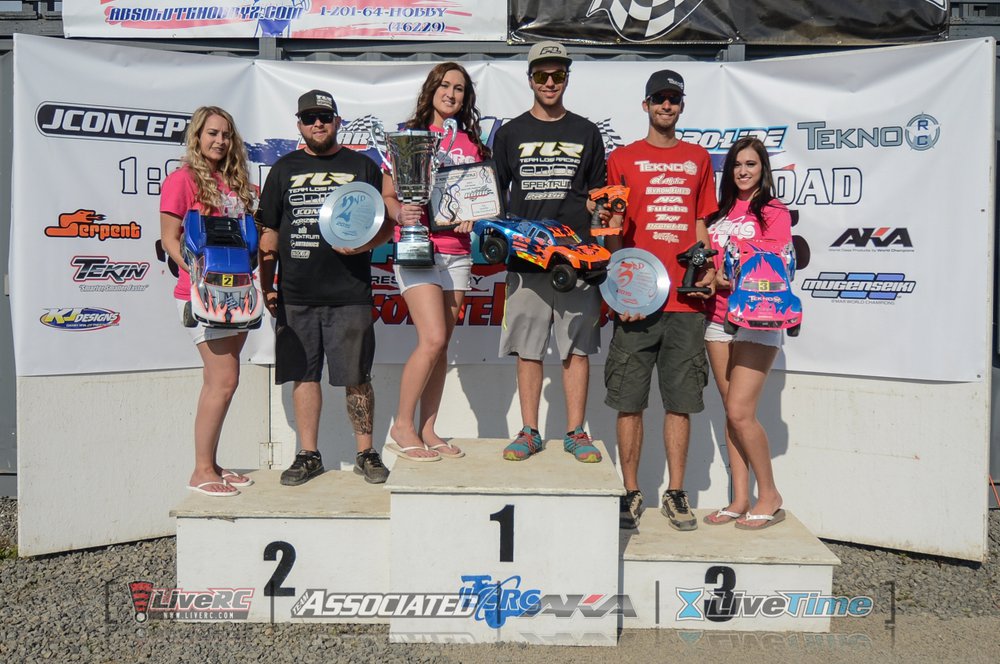 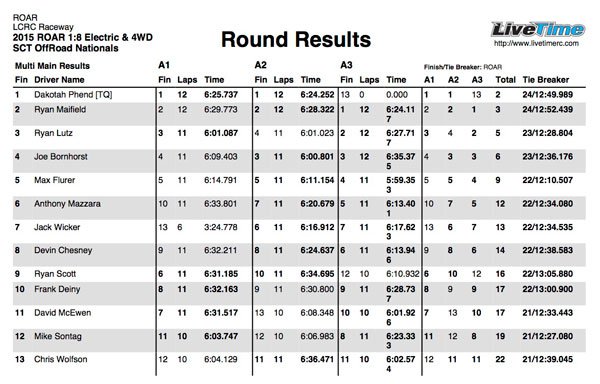 Maifield started the triple A-Mains from the front of the grid in the Truck category, but had a difficult time in A1 - Phend ran away with the win, while Lutz also beat Maifield to the finish line by eight-tenths of a second. Maifield recovered after that, winning A2 while Lutz again finished second, just two-tenths over Phend. 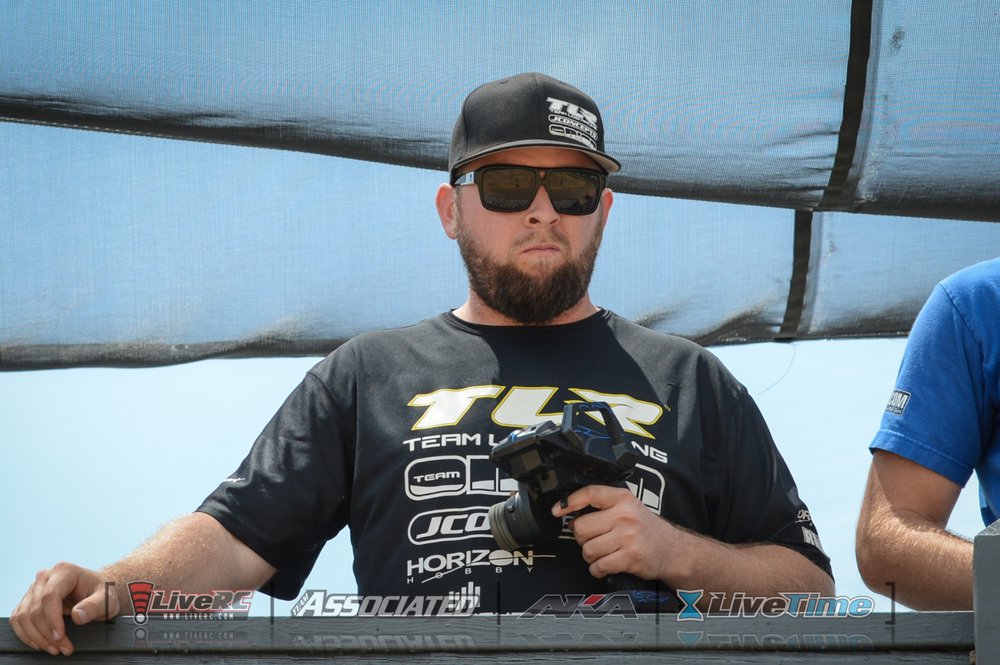 All three drivers were in contention for the championship going into the third final, but Lutz dropped out of the race with just 30 seconds to go - leaving the TLR teammates to decide the overall. Maifield edged Phend by three-tenths of a second to lock up the title. 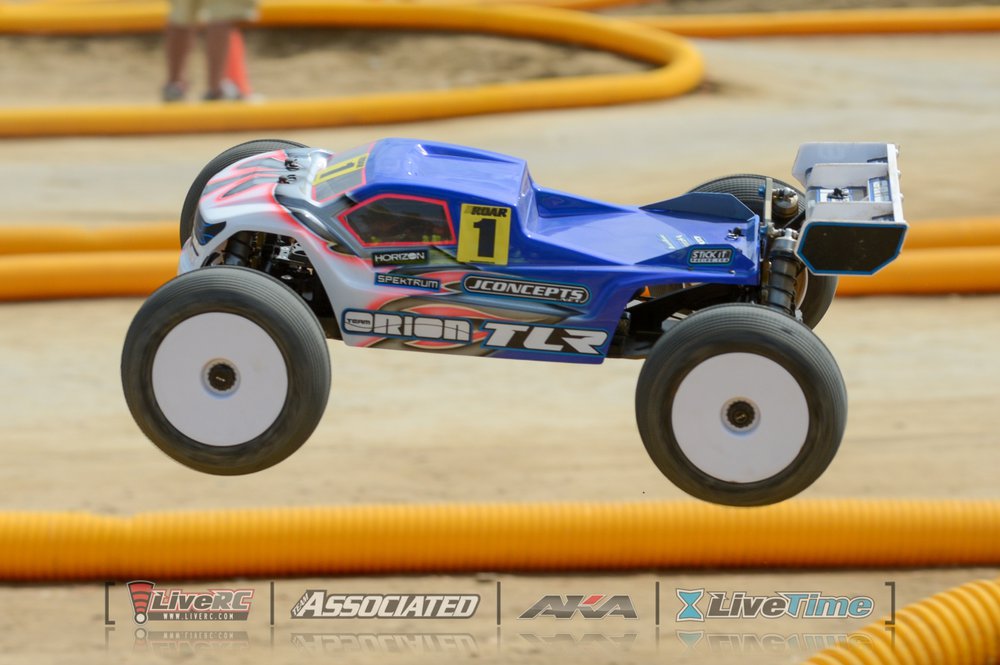 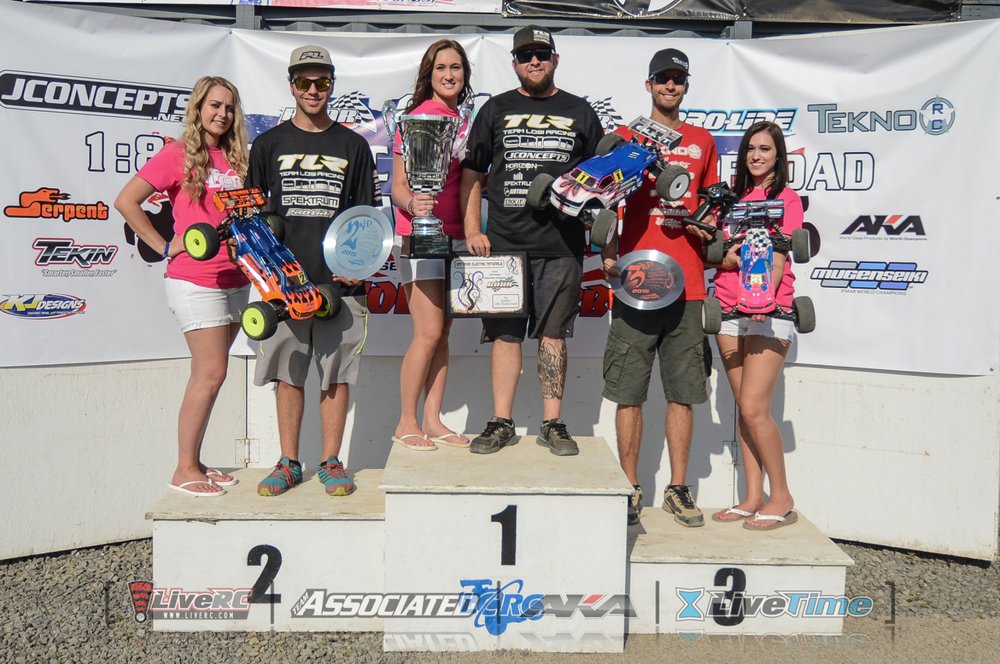 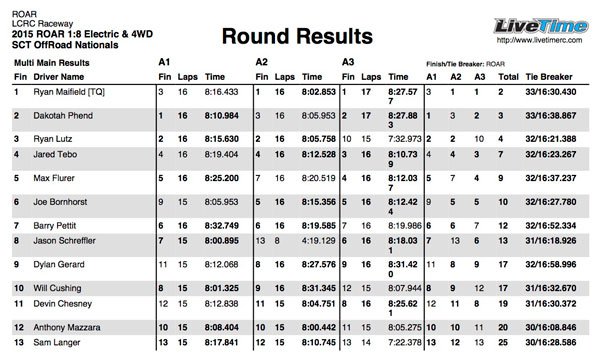 Maifield had an easier time in the Buggy class, where he had also earned the TQ spot. In A1, the top three - Maifield, Phend and Lutz - finished less than four seconds apart, with Maifield a comfortable 1.8 seconds ahead of his teammate. Phend again raced from third on the grid past Lutz in A2, but was unable to catch Maifield; the Arizonan won by over 5.5 seconds to lock up the championship early. 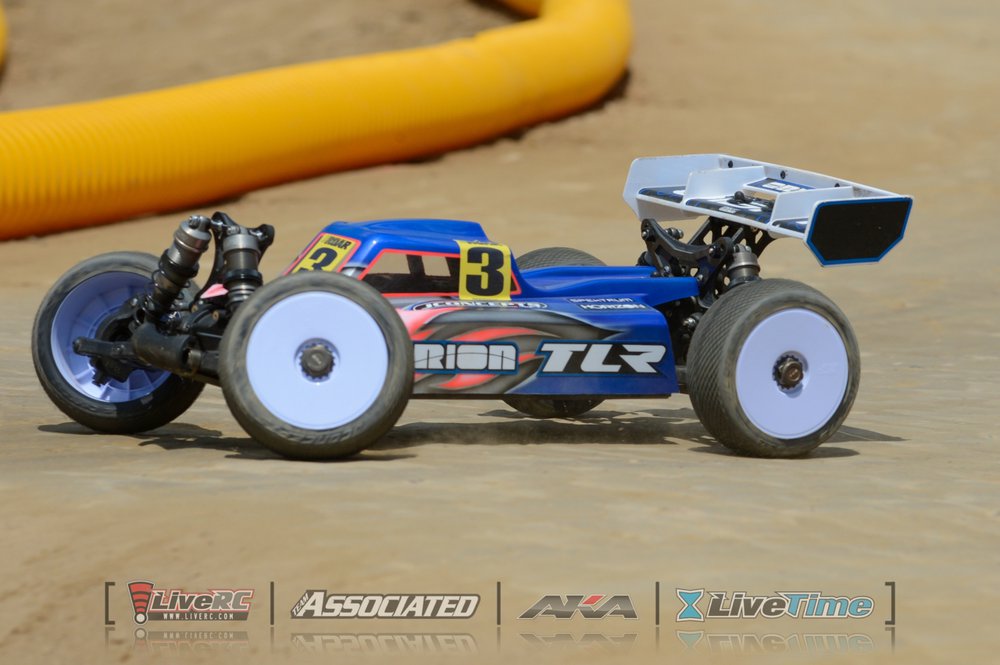 Lutz dropped out of A3 less than two minutes into the race, leaving Phend to beat Jared Tebo and Barry Pettit by over six seconds. Phend and Lutz finished second and third overall. 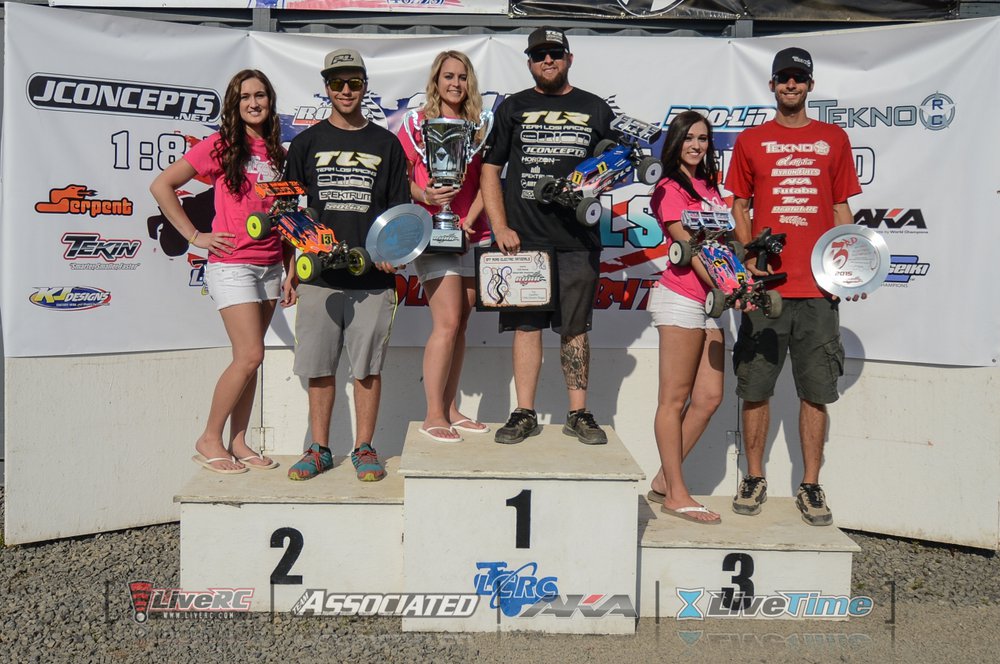 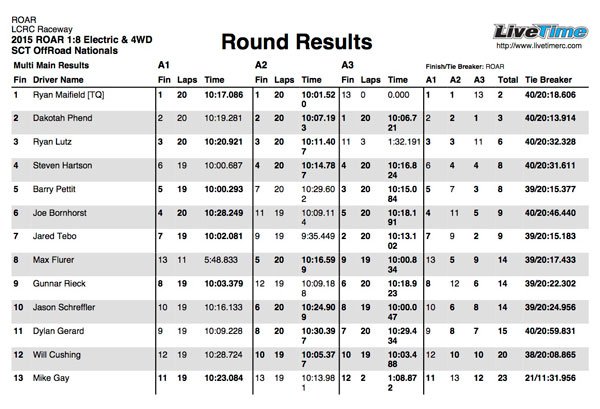 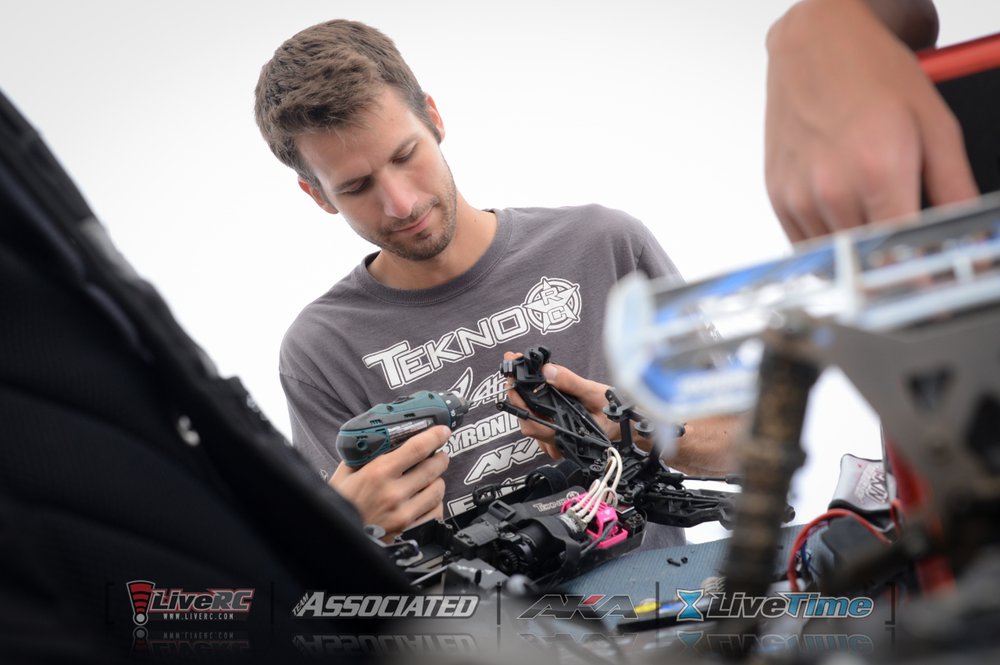 Tekno RC’s Ryan Lutz was the only driver who got close to the TLR twosome - finishing third in all three classes.
Flashback Friday
Share:
blog comments powered by Disqus