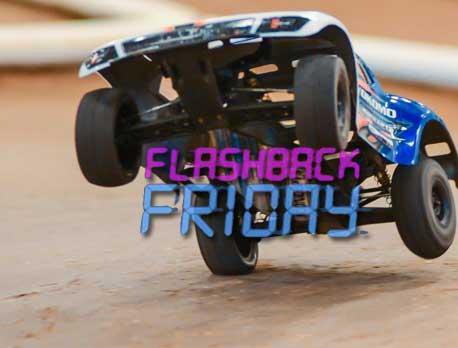 Everybody knows that Friday is meant for reminiscing old times. Each week we take you back in time as we flashback to some of R/C racing's greatest moments, products, drivers, and more!
Flashback: 2017
Phend's two titles, Tessmann's and Evans' wins at inaugural Desert Classic
Last weekend, 158 drivers totaling 311 entries competed in the second annual Desert Classic at Hobby Action RC Raceway. 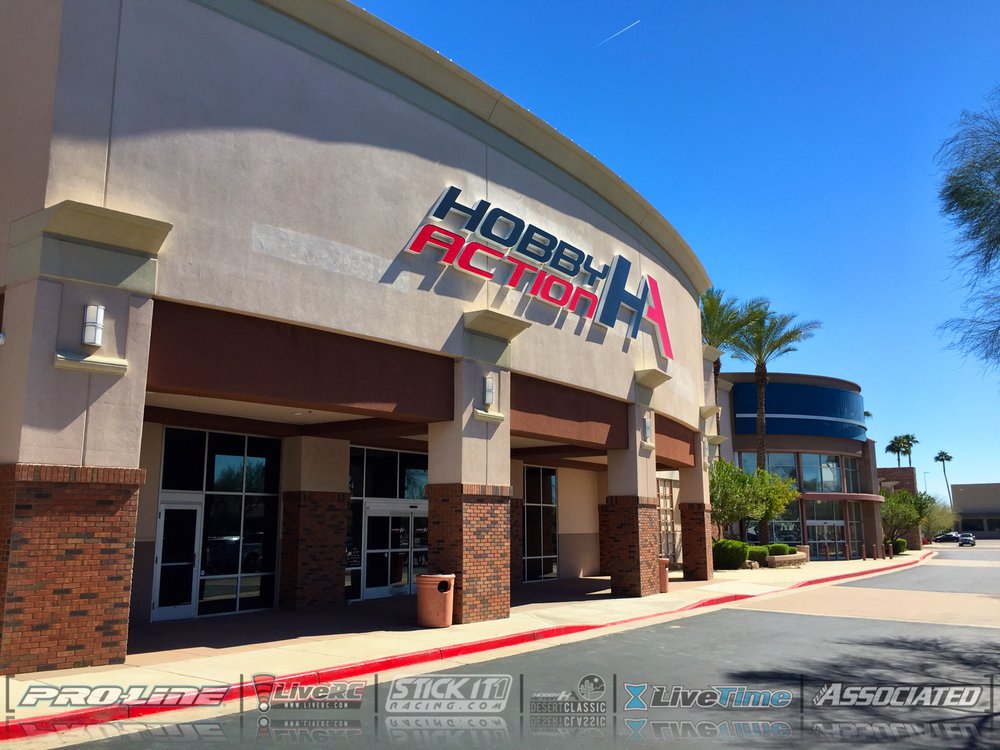 One year ago today, the inaugural event kicked off with 159 drivers adding up to 286 entries. 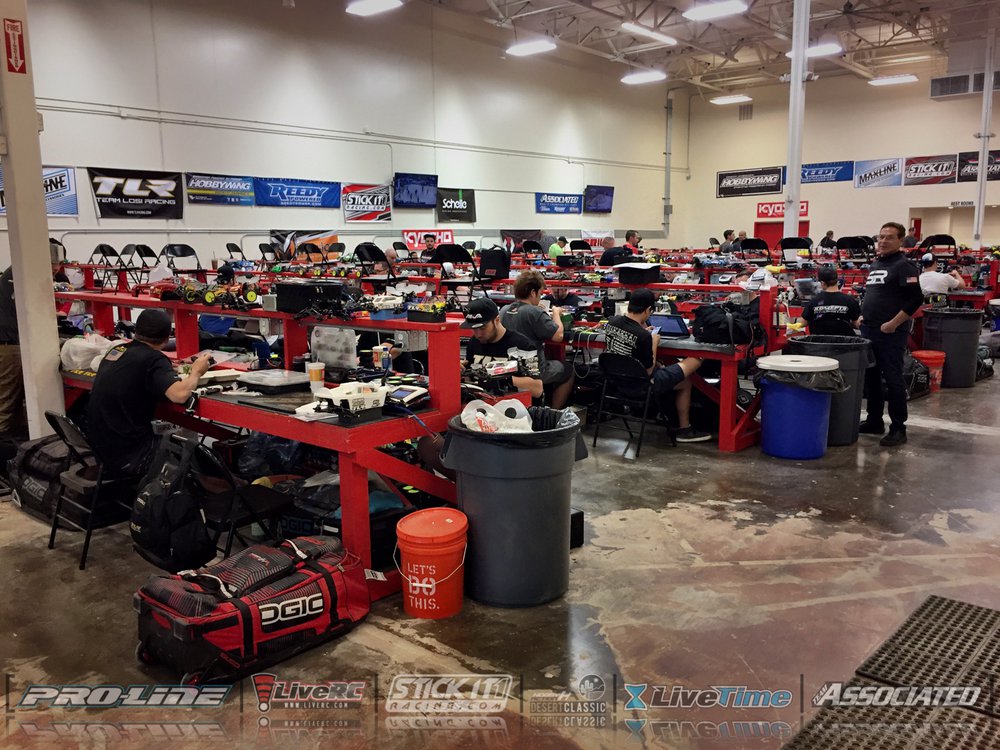 The huge gathering of racers was the perfect way to commemorate the track’s first full week in business. 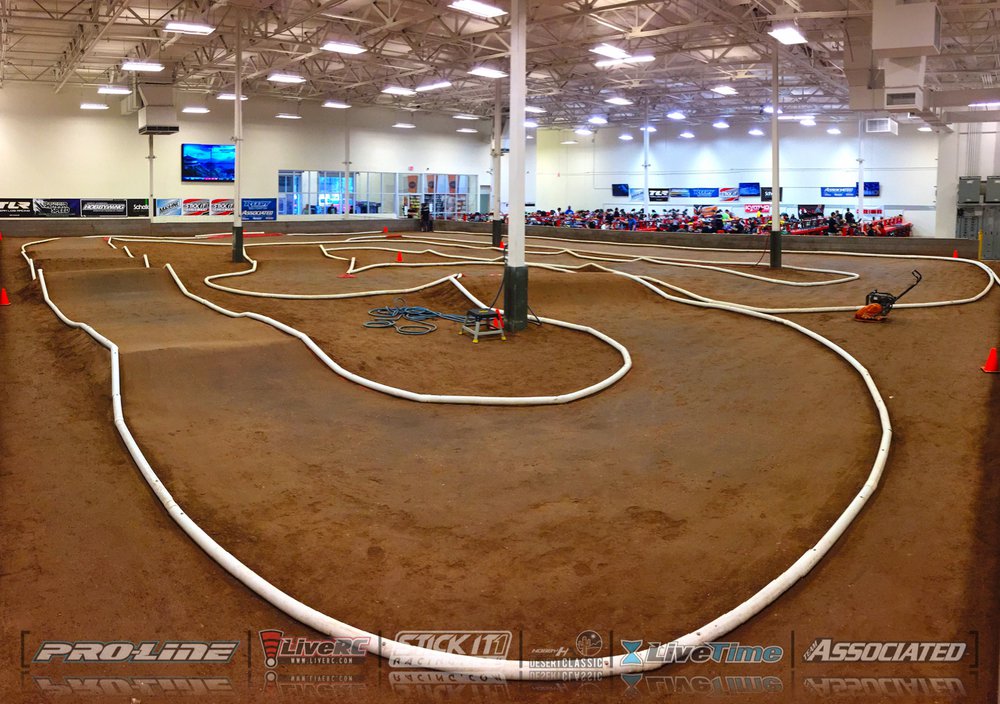 In the Modified 2WD class, Reedy-powered Team Associated driver Dustin Evans set the pace in round one with the fastest time by over a second over anyone else. 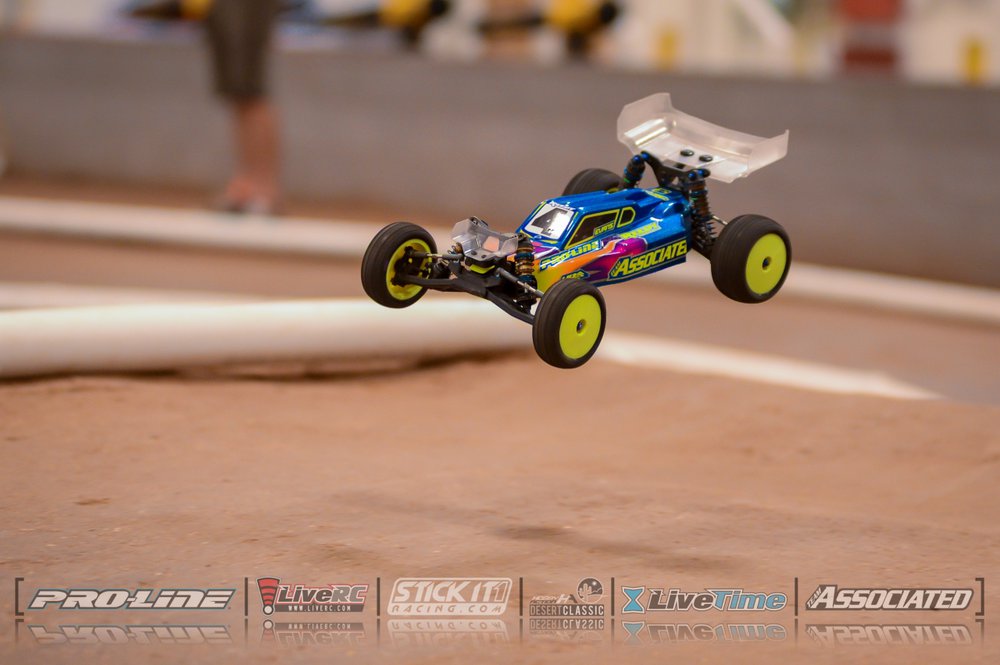 In round two, TLR’s Dakotah Phend — who completed just five laps in the first round — smashed the field by more than four seconds. 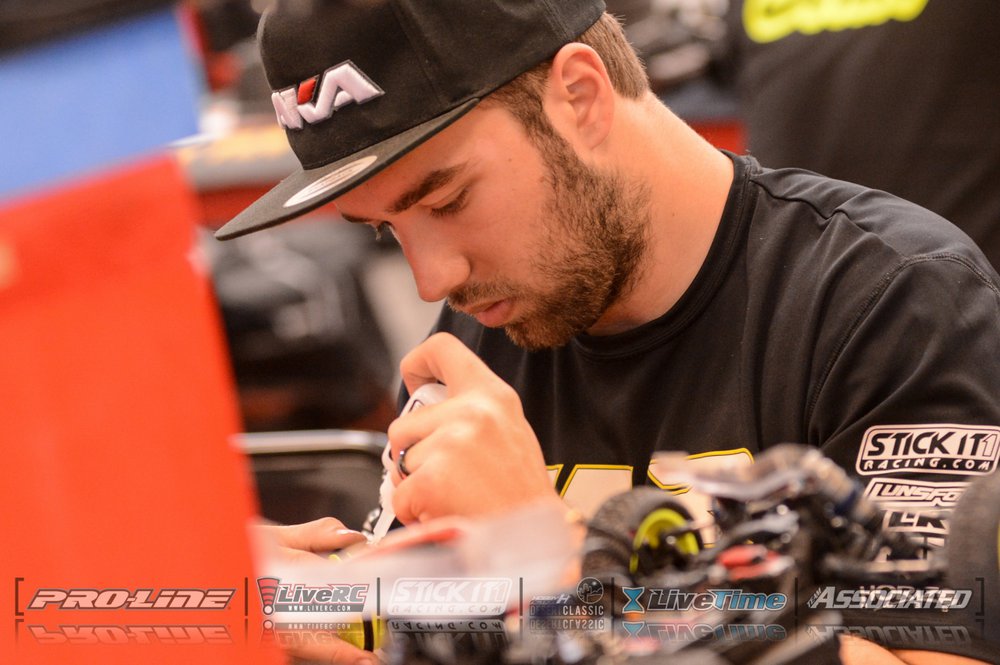 Evans and Phend traded round wins again in Q3 and Q4, each improving upon the previous track record leading up to Phend’s 18-lap run in the final round, which earned him the tiebreaker.
While Evans may have proven a tough competitor in qualifying, he couldn’t match that aggression in the finals and eventually missed the podium completely. Phend won the first two legs by comfortable margins to wrap up the title, while Ryan Maifield recovered from an eighth-place finish in A1 to finish second overall and Ty Tessmann claimed third in a three-way tie. 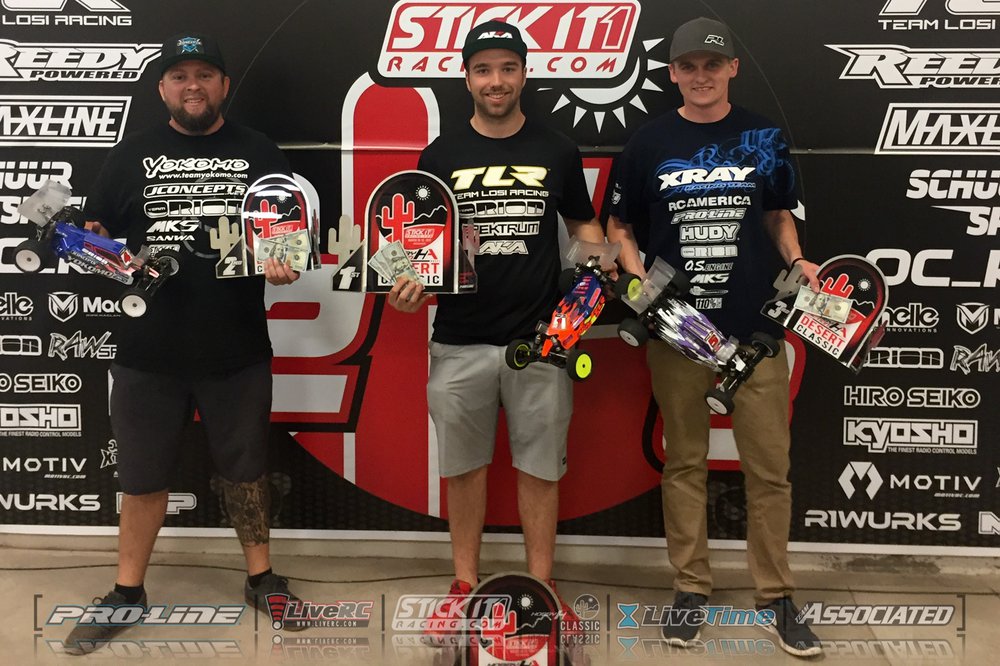 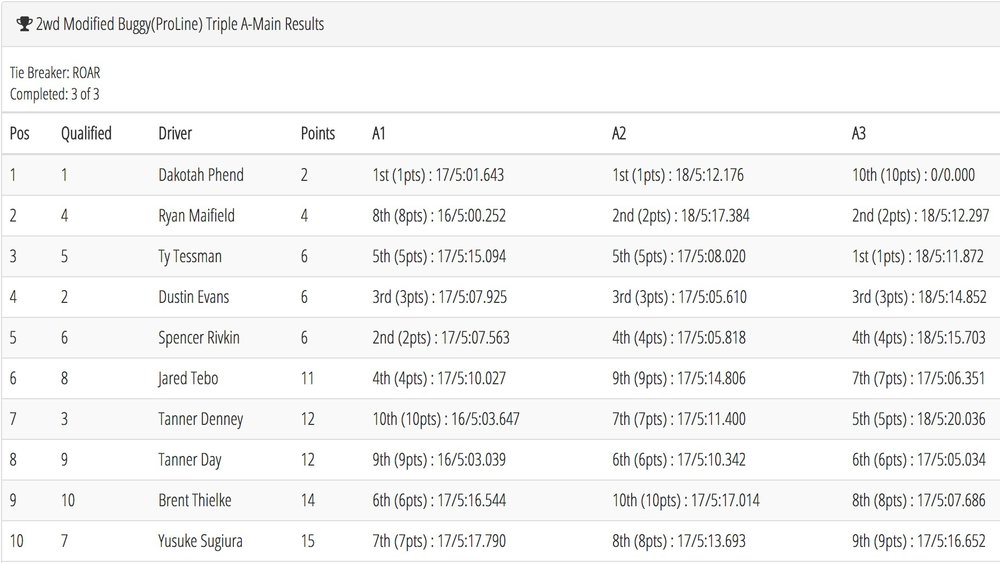 Arizona native Ryan Maifield drove his Yokomo buggy to the fastest time in the first two rounds of Modified 4WD qualifying, finishing more than a second faster than the rest of the field in each. He managed only fifth and fourth in the final two rounds, but secured the front row on the grid when Tessmann and Evans took turns topping the charts before points were tallied. 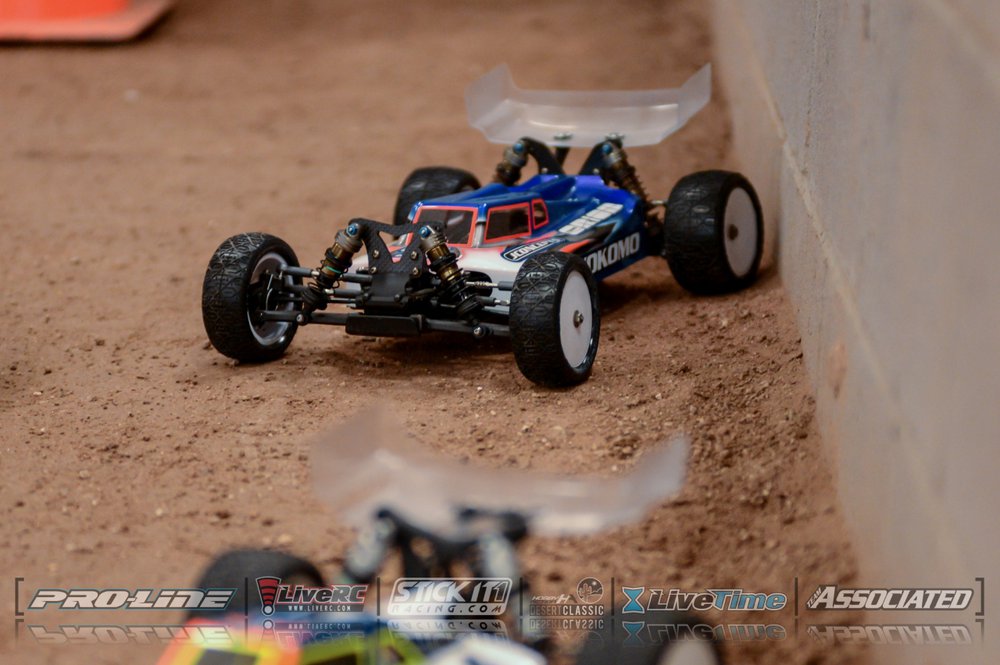 Maifield looked to be back in control when he held off a hard-charging Tessmann to win A1, but he crashed less than 90 seconds into A2 and let the Canadian slip past to force a title-deciding third main event. 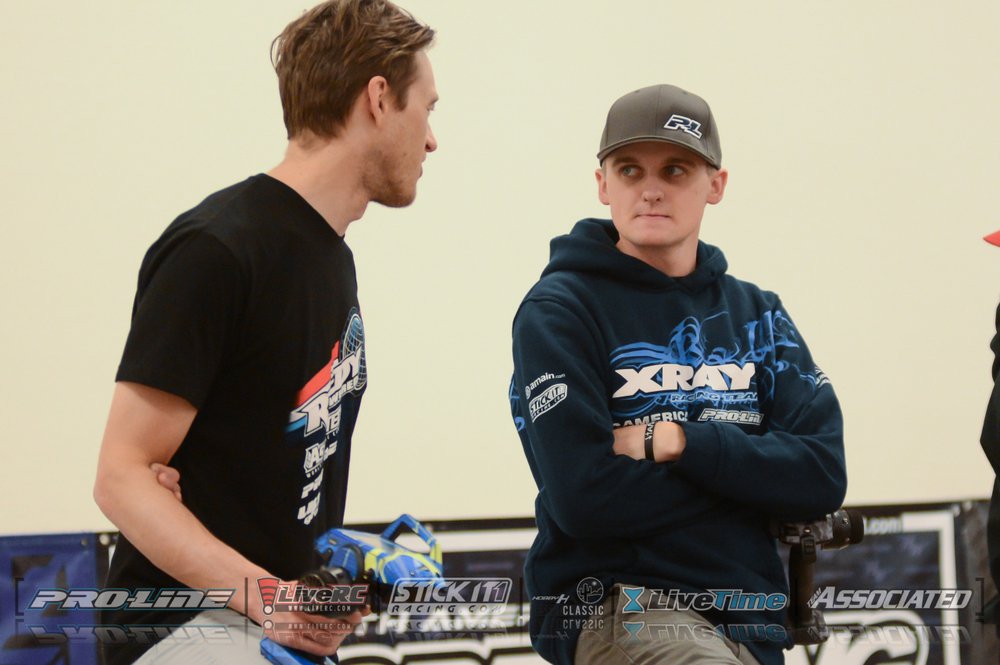 As the master clock expired in A3, Tessmann dove to the inside of Maifield at the end of the straightaway and survived the contact to take the title. CJ Jelin matched Evans on points and won the tiebreaker for third. 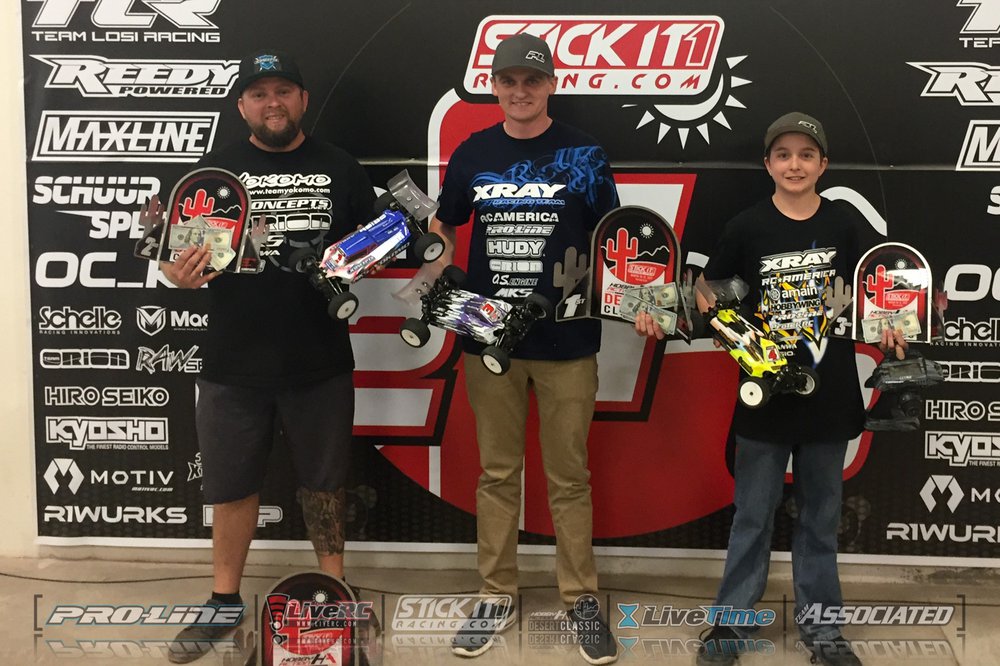 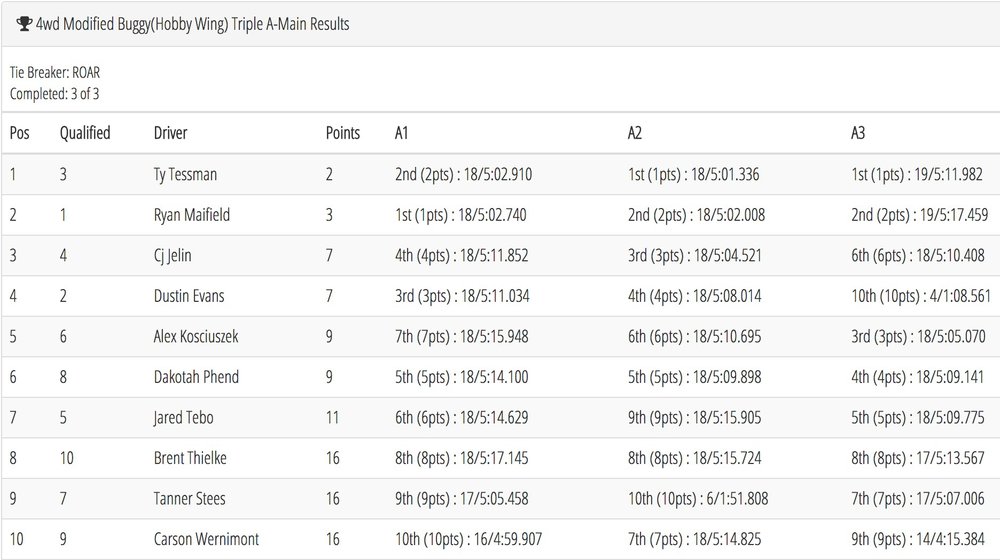 The Modified 2WD Short Course class never managed much of a challenge for Phend; he set the fastest time in all four rounds of qualifying, with the smallest margin still more than 3.5 seconds. 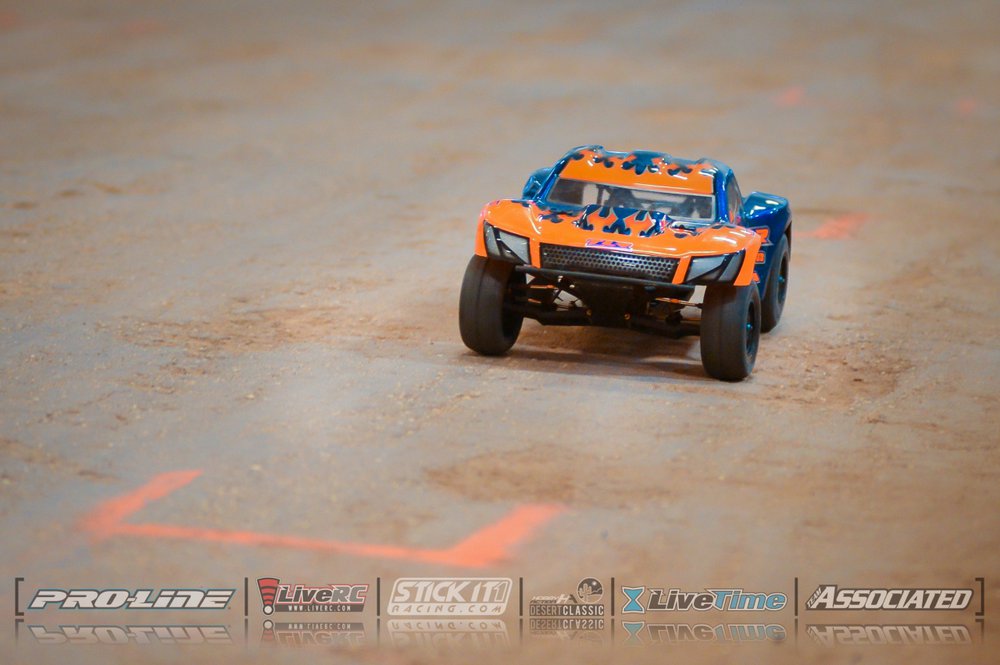 The main events were more of the same. Phend was the only driver to make it by the finish line for a 17th lap in the first two legs, earning a well-deserved victory lap as he coasted home with the championship. In Phend’s absence from A3, Maifield fought his way past second qualifier Spencer Rivkin for the win and second overall. 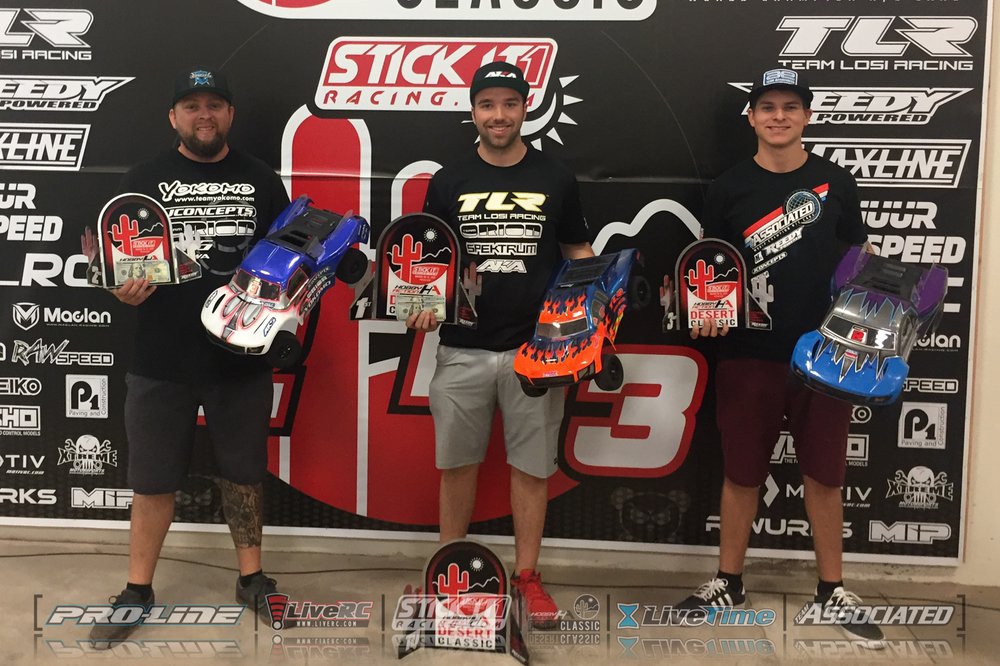 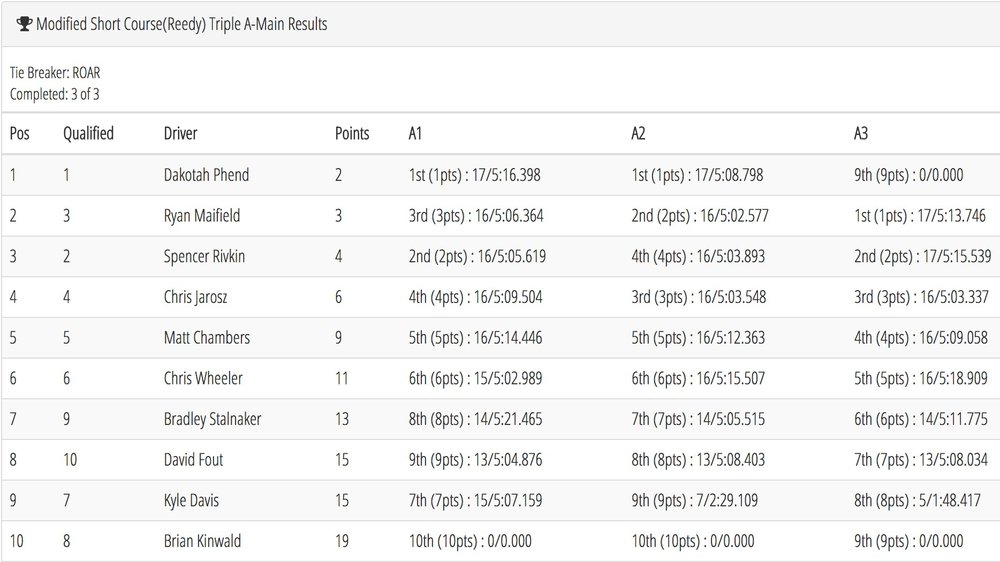 A3 replay not available

Jared Tebo, Phend and Tessmann all took turns at the top of the Modified Stadium Truck field in the first three rounds of qualifying. Phend edged Tessmann by 0.477 seconds in the final round to capture the overall TQ honors. 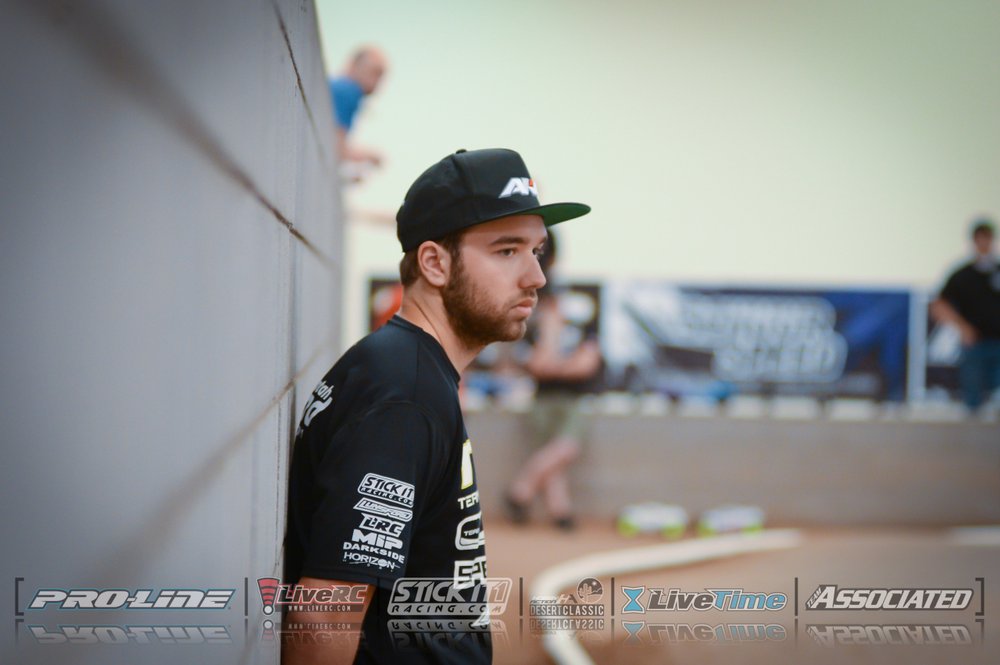 Phend couldn’t close the deal in the main events, however; late-race mistakes in A1 and A3, as well as a crash on the second jump of A2, rendered him unable to win even a single leg of the triple A-Mains. In his place, Tessmann won the A1 before Evans raced up from fourth on the grid to win A2 and A3 for the championship, with Tessmann and Phend filling out the podium. 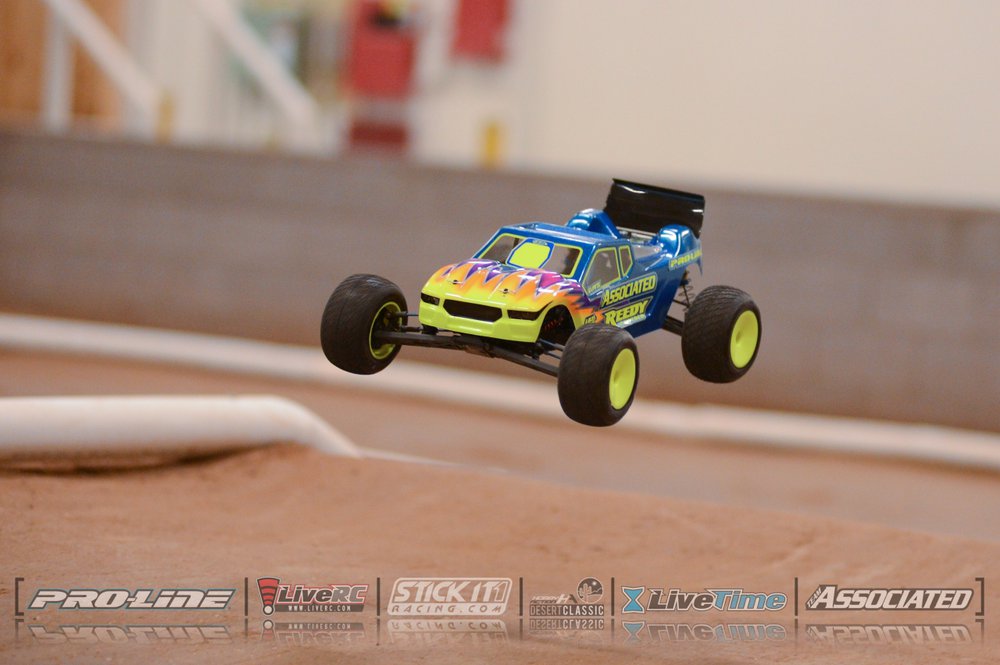 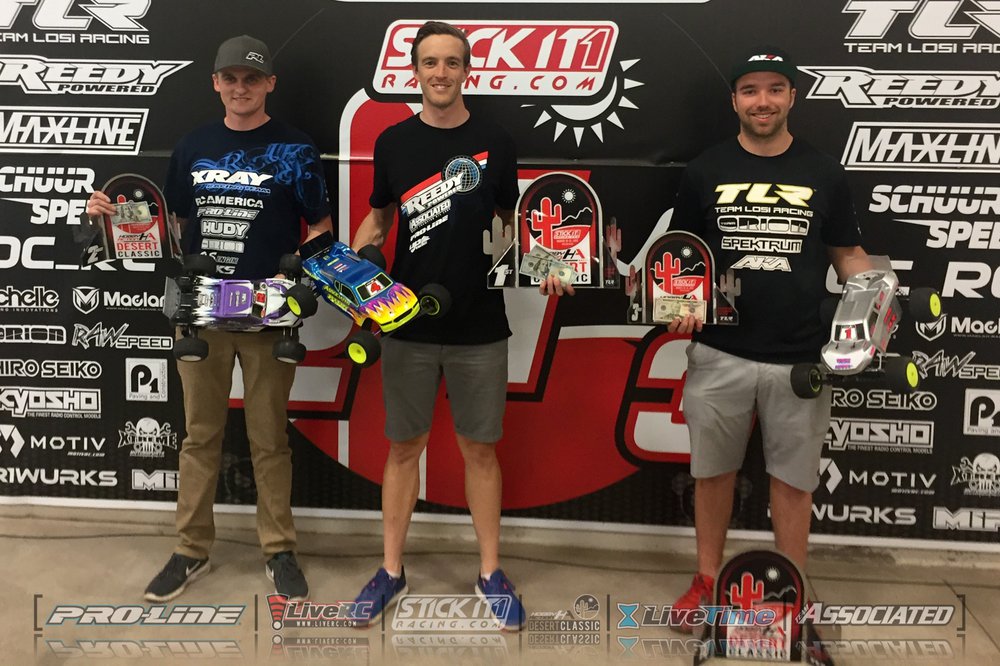 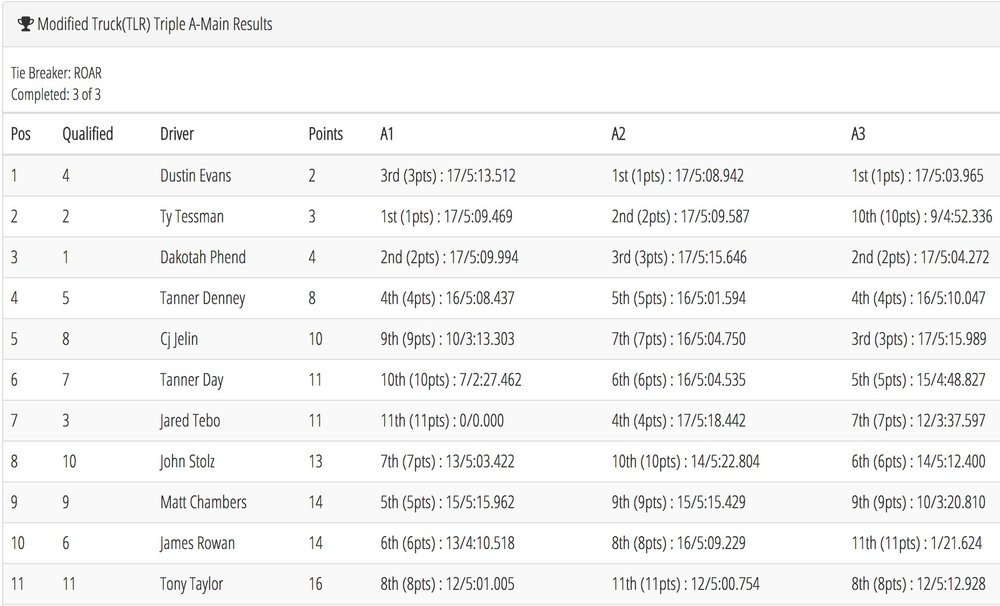 A3 replay not available

All three winners of the inaugural Desert Classic returned to victory this past weekend, with Tessmann, Phend and Evans all repeating as 4WD, Short Course and Stadium Truck champions. The only difference in the Modified ranks was in the 2WD division, with local hero and former world champion Spencer Rivkin — who managed only one podium finish in 2017 - taking the TQ and win. 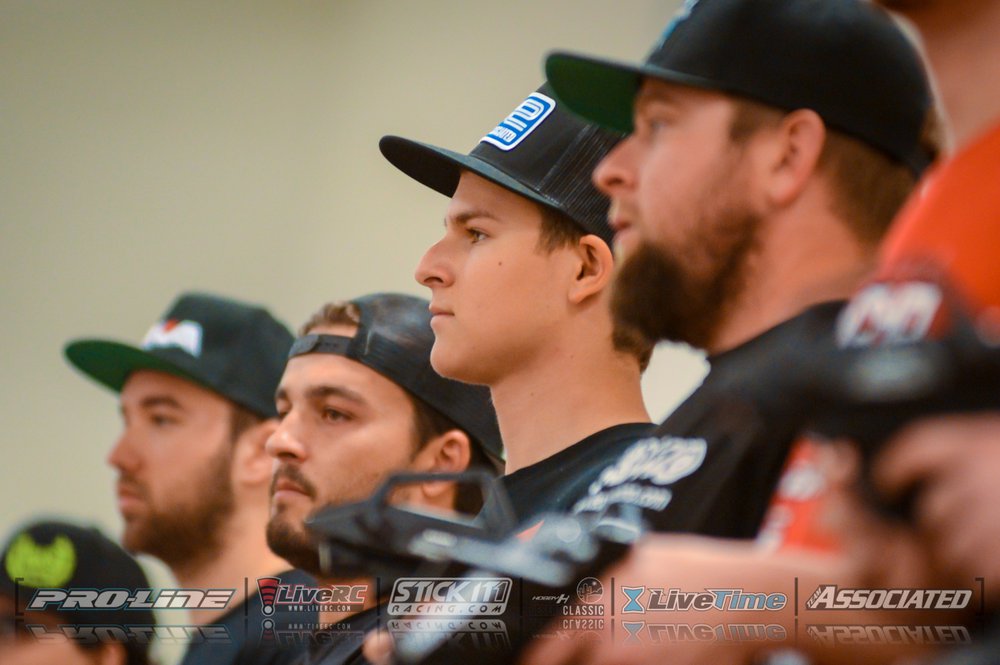