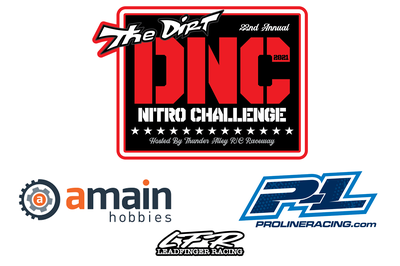 FLASHBACK FRIDAY: The history of front wings on 2WD buggies 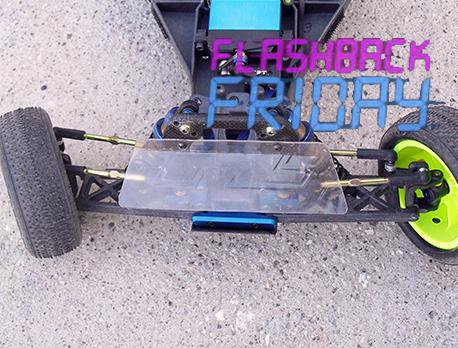 Everybody knows that Friday is meant for reminiscing old times. Each week we take you back in time as we flashback to some of R/C racing's greatest moments, products, drivers, and more!
Flashback: 1987-2015
The evolution of front wings on 2WD off-road buggies
Although the concept of adding a piece of Lexan or plastic to the front of a 2WD buggy dates back almost 30 years, the 2015 racing season was definitely the “Year of the Front Wing” for electric off-road racing. The continuing trend toward high-speed track layouts and high-grip surfaces have placed an increased importance on aerodynamic balance - and more racers are “drinking the Kool-Aid” now than ever before.
Downforce - the traction-increasing force generated by a vehicle’s aerodynamic design - is nothing new to RC cars. The early pioneers of the original nitro-powered 1/8-scale on-road racing vehicles fashioned shells to look like full-size sports cars which, of course, had been designed to utilize the science of aerodynamics to generate the most grip possible. Early 1/12-scale electric pan cars were no different.
Wings designed to add rear downforce also quickly found their way onto production off-road buggies, like the original RC10 (in 1984) and JRX-2 (in 1988). By that point, racers had already begun experimenting with adding wings to the front of their buggies, too. “Front and rear wings have been used since the 80s,” said JConcepts founder Jason Ruona in an interview about front wings posted on the JConcepts website last September. “They will come in and out of a trending setup but we will never really see them completely disappear. What we will see are more advanced or different methods to achieve aero advantage or balance to a vehicle and I think this is where the high-grip / high-speed surfaces are going to take us.”
The late 80s were an age of racers hand-fabricating one-off parts to make their cars work, and many racers simply bolted existing wing mount tubes to the front of the chassis, then tweaked rear wing mounts to fit. The first production front wing I could find for a 2WD buggy was the Bolink Sprinter body kit for the RC10, pictured here in an ad scanned and posted to RC10Talk. Though I’m not sure when the Bolink Sprinter was first released, Sammy Swindell drove the #1 Kodiak sprint car in 1987. 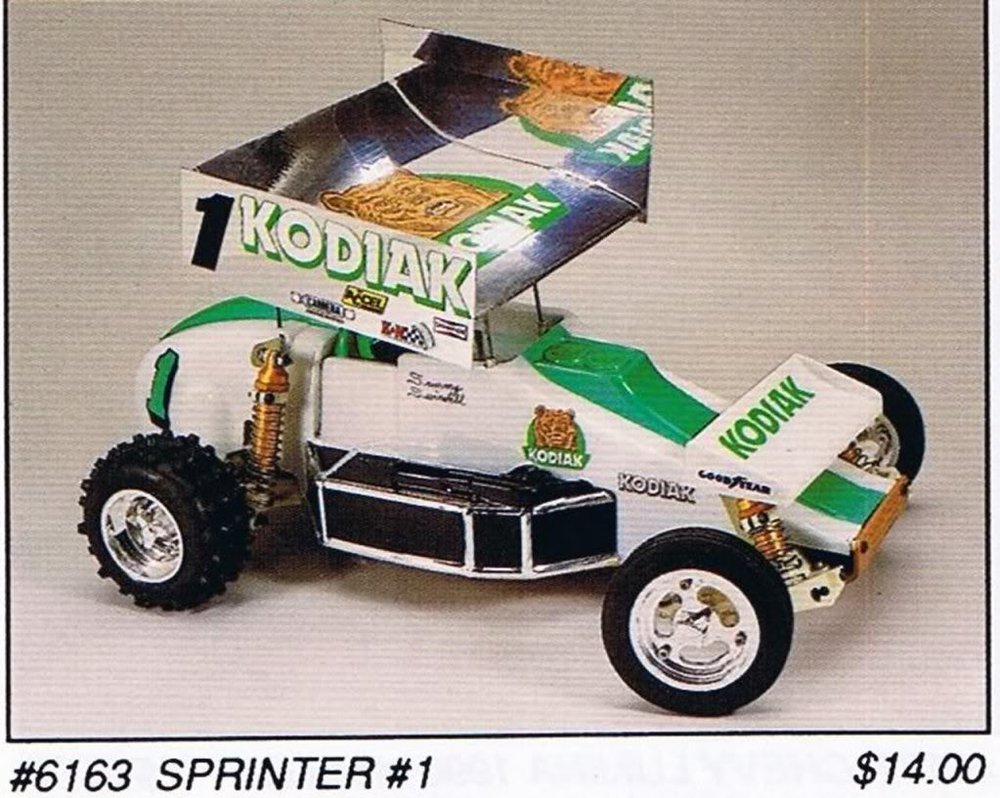 Pro-Line Racing made a front wing as well, though it too was intended to be fitted to a dirt oval vehicle. This bargain bin gem was resold on eBay. 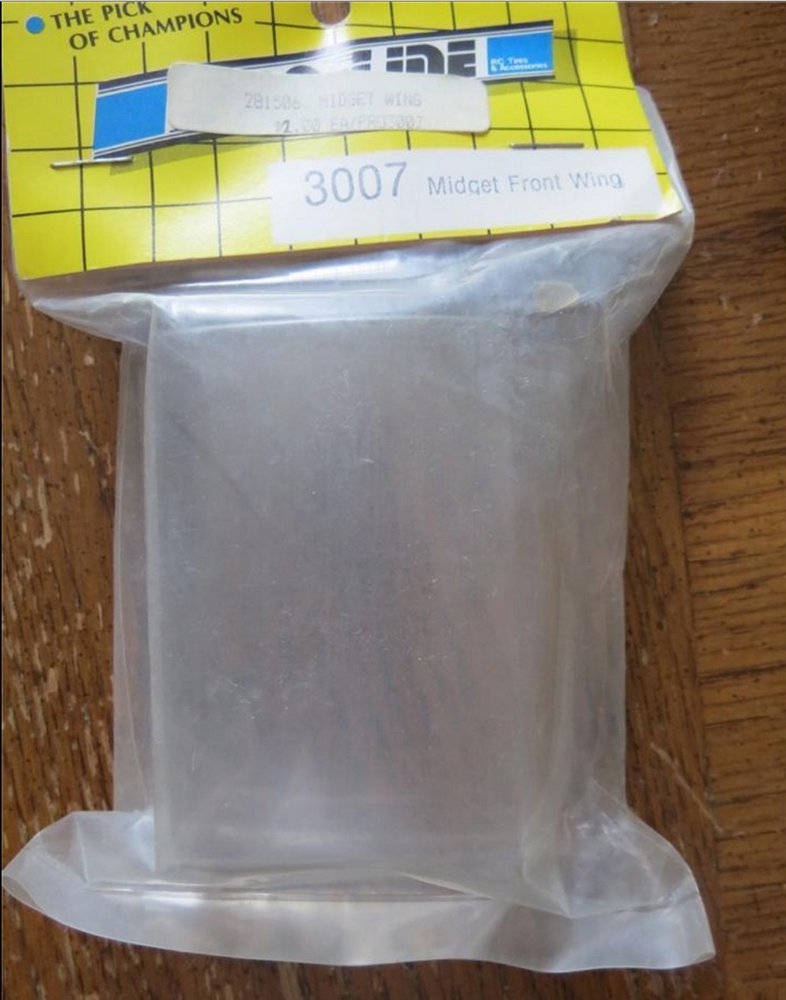 Front wings remained a novelty and an experimental option in the U.S. throughout most of the 90s, though the trend picked up more quickly on the higher-grip grass and turf tracks of Europe. Here’s a spread of the February 1994 issue of RC Model Cars that was posted to vintage-rc.net showing the Tenth Technology Predator 4WD buggy with a front wing. 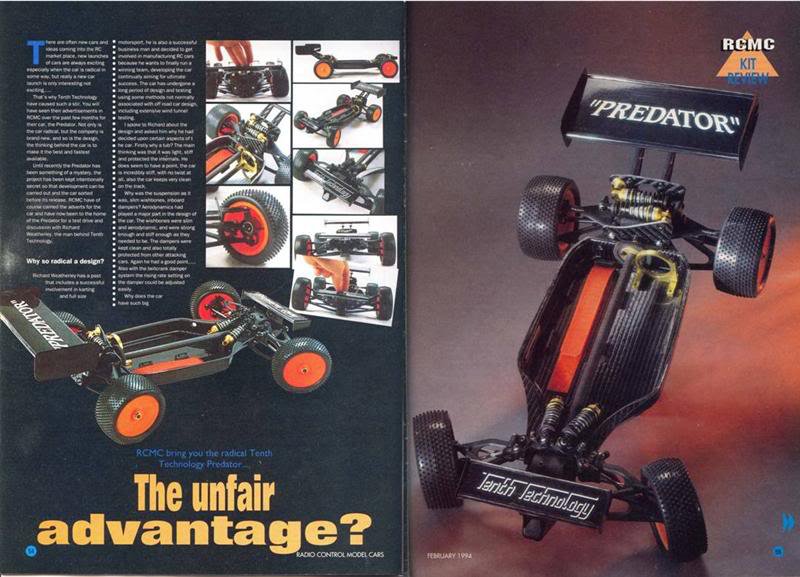 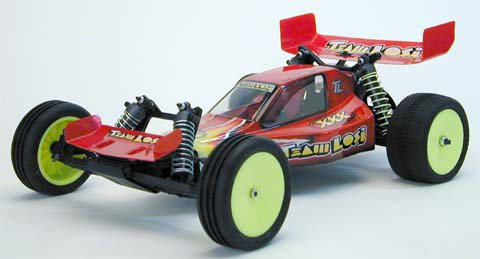 See those holes? Those are for the front wing. And check out those ball stud washers! 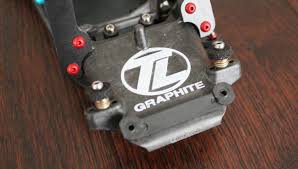 The parts listing, which is still active on Losi’s website, said, “The development team at Team Losi has found that, much like full size open wheel racecars, off-road buggies can benefit from additional downforce. The combination of these durable Lexan® wings provide an exceptional front/rear balance for improved steering response and overall handling on high-speed tracks.”
“None of the racers really thought of it,” said Kinwald, “that was all Jr. We had all seen them on European racers’ cars, but he was really the one who thought it could be an advantage.”
The 1999 ROAR Nationals were held at MnM Raceway, and if that sounds totally unfair - it was. Kinwald dominated the event, winning the first of four-straight 2WD national titles with the new buggy. Interestingly enough, though, he never used the front wing at any of them. 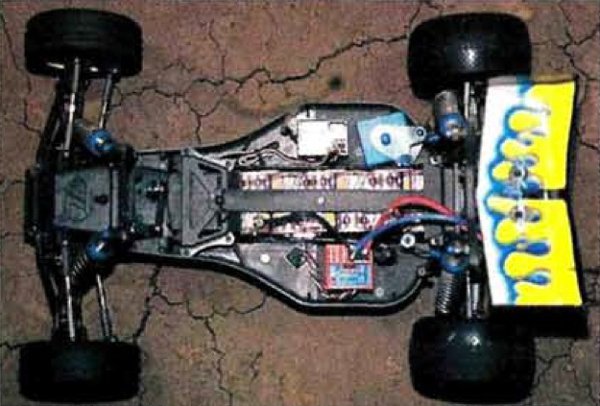 Team Losi drivers often experimented with the front wing at various events, but it never seemed to truly catch on. Tire technology was evolving rapidly, and many drivers seemed to be able to get their cars to steer enough without additional help. Many tracks still had a lot of low-speed corners, and the general consensus among racers was that, with a front wing in place, their cars felt inconsistent when transitioning from high speed sweepers, where the wing had its most benefit, to slower corners where it didn’t help as much.
The lack of all-out, on-track success didn’t stop people from trying them in various conditions. In 2006, JConcepts released the B4 Front Stabilizing Wing, which included the necessary hardware to mount it. 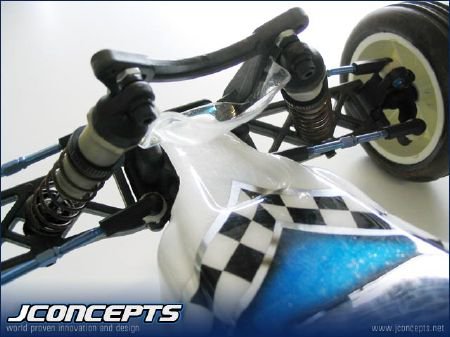 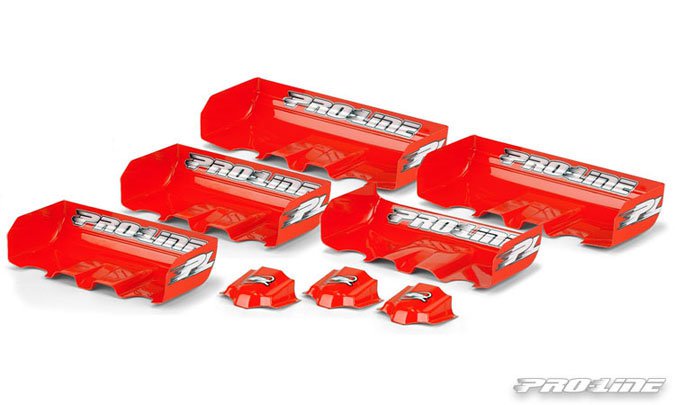 Kinwald had joined X-Factory in 2006, and the small Ohio-based company’s X-6 mid-motor conversion for the B4 buggy shook up the status quo for the 2WD class. Despite the fact that the front suspension was unchanged from the Team Associated buggy, the X-6 was the first total re-think of 2WD buggy design since the XXX. Naturally, that sparked a new wave of experimentation - here’s an X-Factory photo of Kinwald’s buggy from the 2010 Hot Rod Hobbies Off-Road Shootout, fitted with a large front wing that had been trimmed from the scrap Lexan of a Pro-Line stadium truck body. Apparently those small front wings weren’t even close to what Kinwald was looking for. 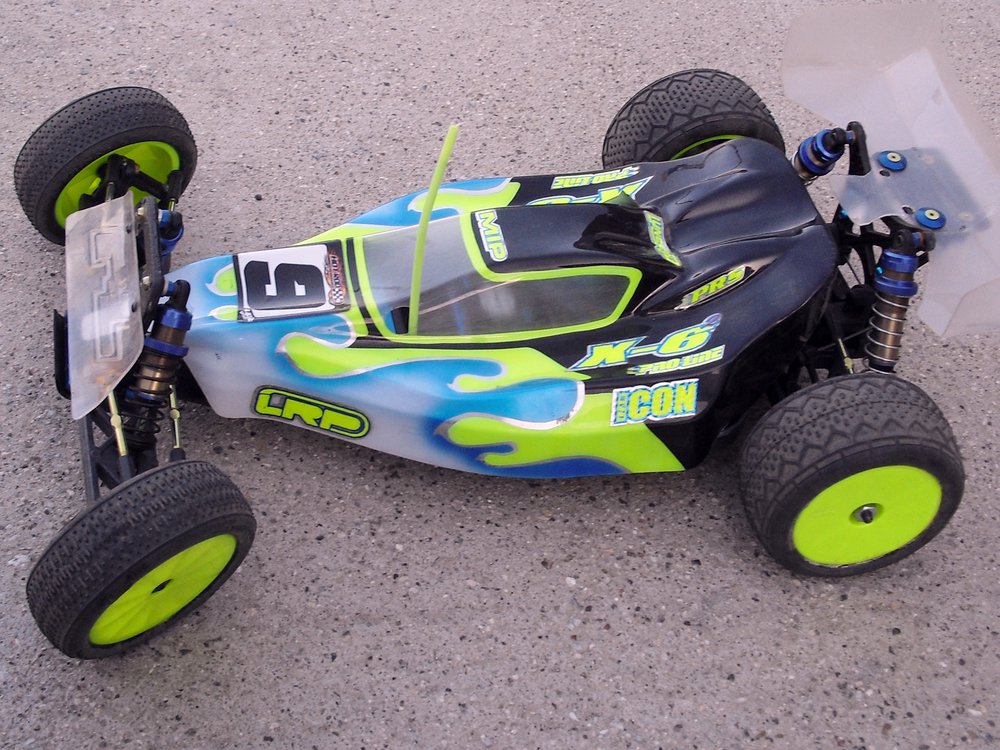 In 2013, mid-motor chassis swarmed into the forefront of the 2WD class - both with Kyosho and Team Losi Racing drivers opting to take advantage of their convertible cars, and Team Associated racers choosing the Centro conversion kit to handle high-speed, high-grip tracks. Just like what happened ten years prior, racers needed time to adjust to the new vehicles and new style of racing - and for US racers, 2013 was more about getting around the track than it was increasing steering and being more aggressive with setup options.
Front wings just weren’t necessary yet. The “cab-forward” bodies that took over off-road racing in the early 2010s had already placed a steeply raked aerodynamic surface just behind the front shock tower, and that seemed to provide enough downforce to satisfy most drivers. Dakotah Phend won the ROAR Nationals with a rear-motor car, and Jared Tebo’s Worlds-winning, mid-motor RB6 had all the steering it needed on the huge, big-air course in California.
Just a few weeks later, Jörn Neumann used this Kinwald-style monstrosity to TQ the Euro Offroad Series opener in Poland. However, front wings still weren’t commonplace just yet. 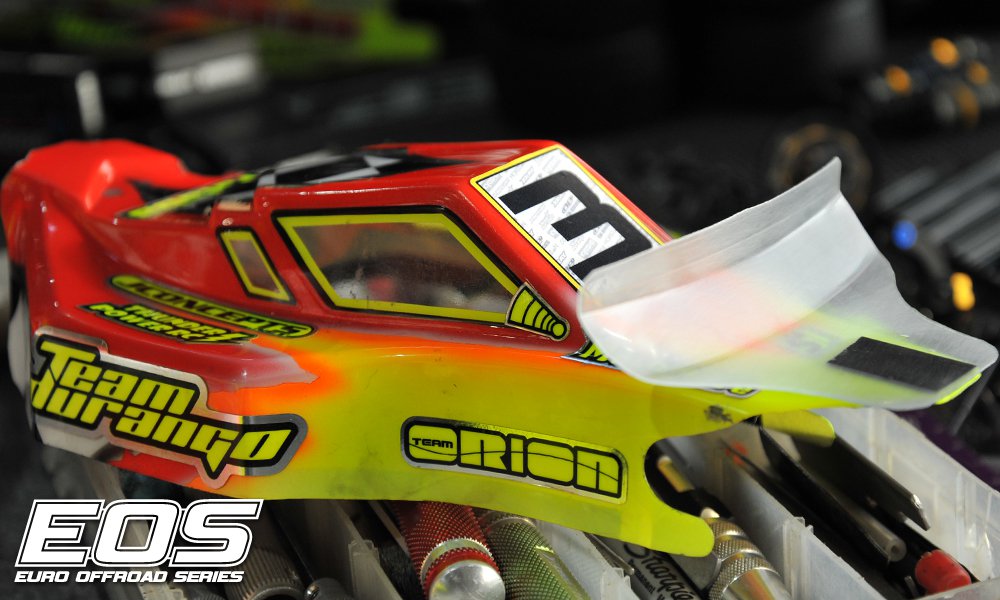 By the 2014 EOS, though, many 2WD racers had settled on using small pieces of Lexan mounted just in front of the windshield - as shown here on Naoto Matsukura’s Yokomo B-Max2 at the opening round in Poland.

Some drivers, like US racer Carson Wernimont who TQ’d that event with his Schumacher buggy, had already begun mounting the wings to the front shock tower itself. 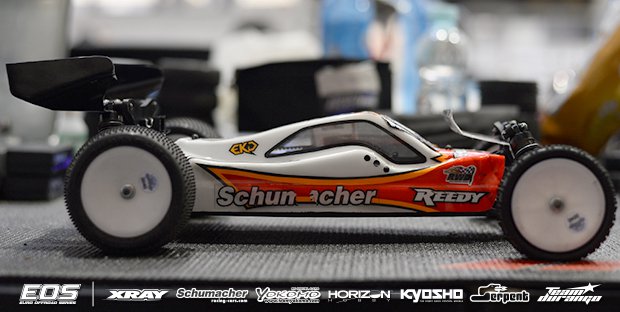 That’s when the floodgates opened. Companies from Azarashi to Serpent introduced their own front wing kits, even though they were still only used sparingly. 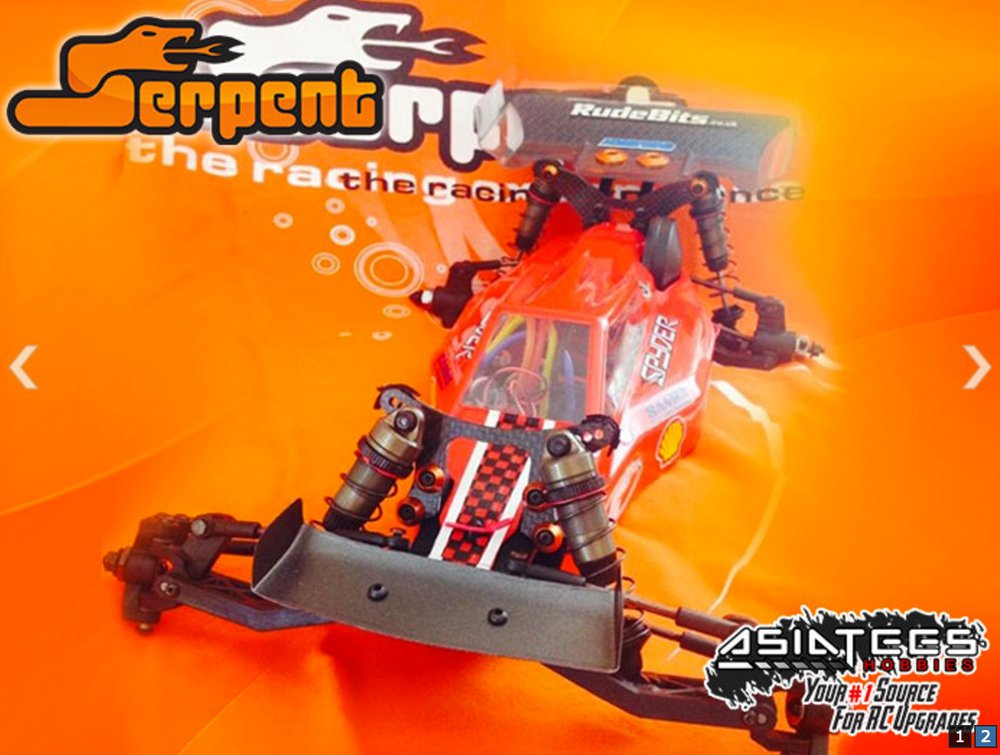 Electric off-road development jumped back into high gear in 2015, with the ROAR Nationals scheduled for a high-bite clay indoor track and the first-ever Worlds on astroturf. Even still, front wings were not used at the Cactus Classic, and of the ten 2WD finalists at the IFMAR Worlds Warm-Up in June only the Team Associated teammates had front wings installed on their B5M buggies. 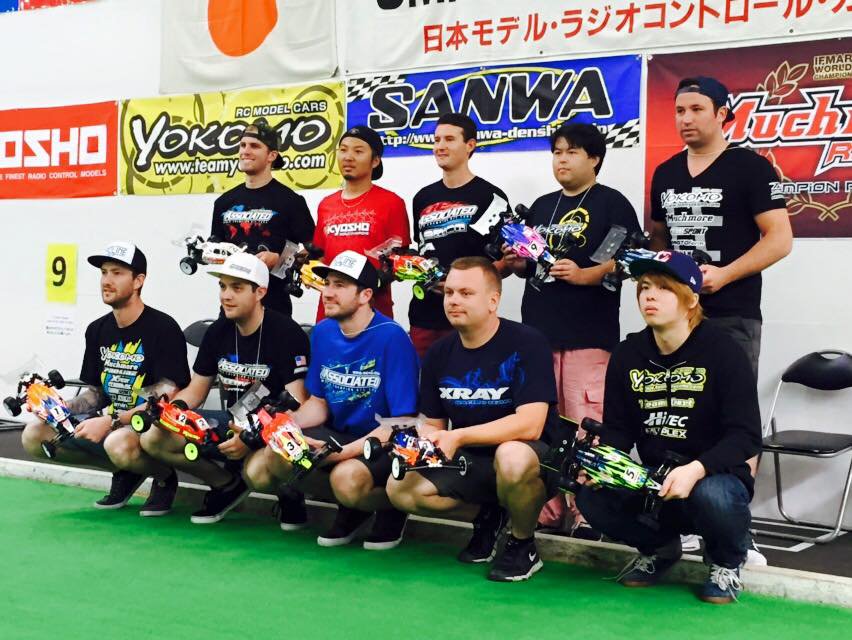 Photo: Joe Pillars, via Facebook
JConcepts released their B5M front wing kit in August, and at the 2015 ROAR Nationals at SRS Raceway, Ryan Cavalieri was the first driver in history to win the title with a front wing installed. 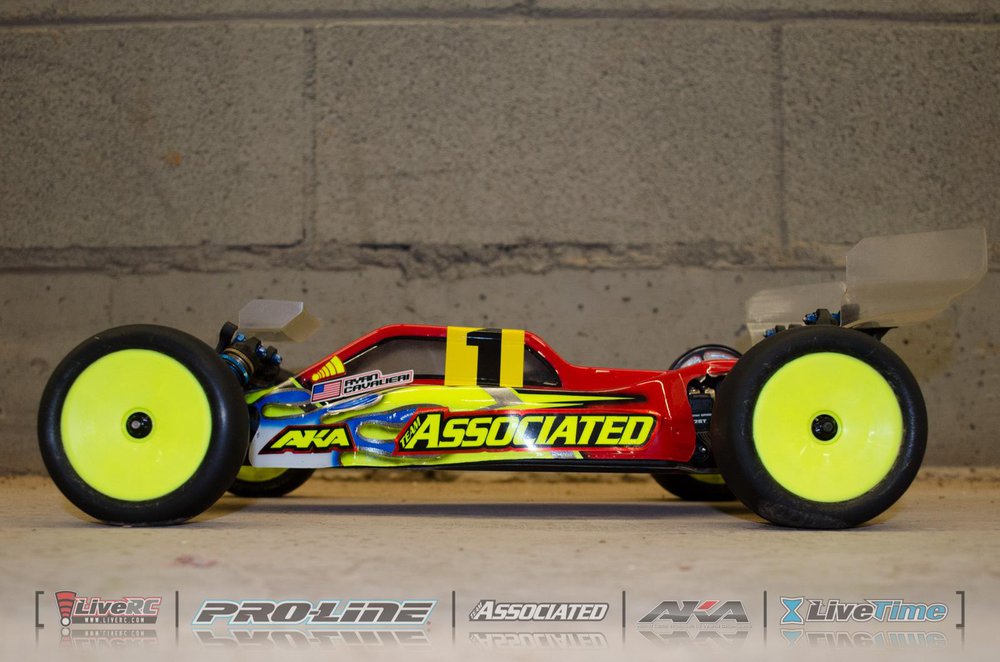 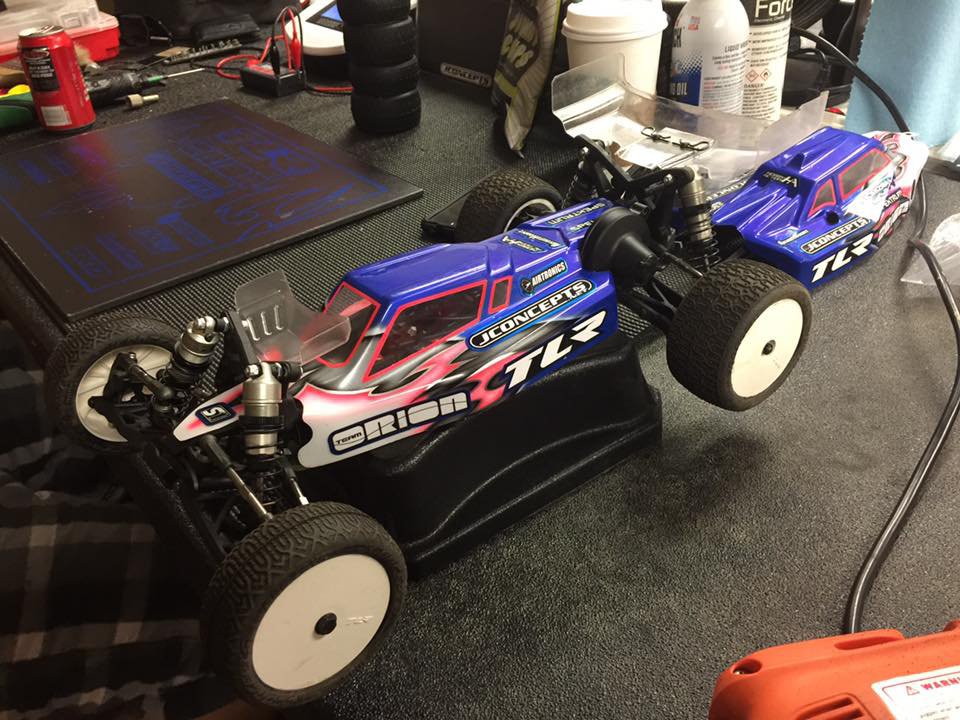 By the time the electric off-road world returned to Yatabe Arena in October, nearly everyone had front shock towers bolted to their buggies - including eventual champion Spencer Rivkin, who became the first driver to win the IFMAR title with a front wing. 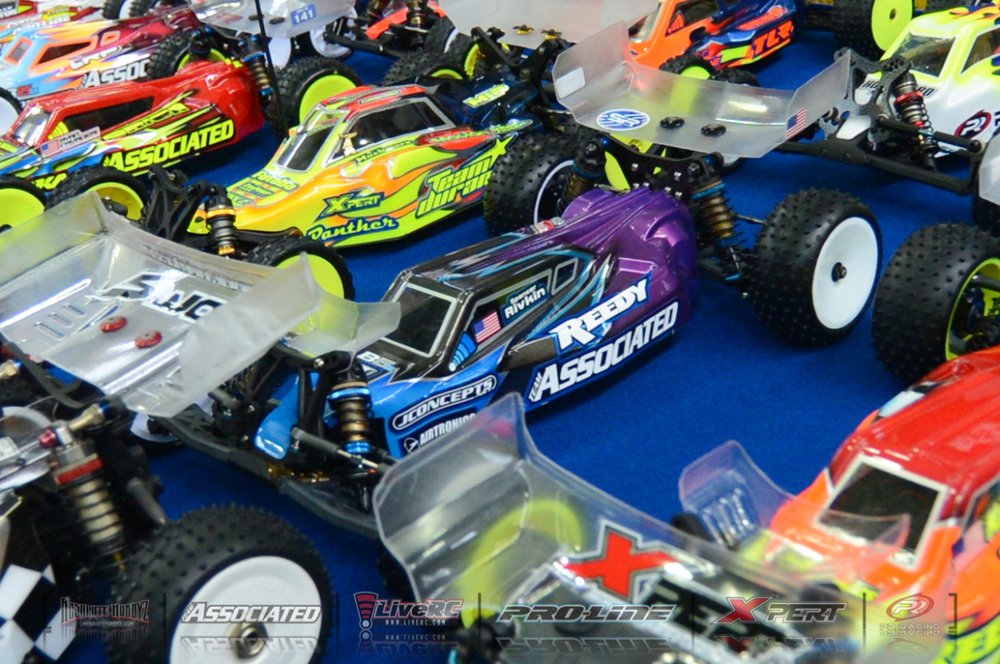 And now, front wings are all over the Euro Offroad Series. Lee Martin has won the first two rounds of the current EOS with a front wing installed. 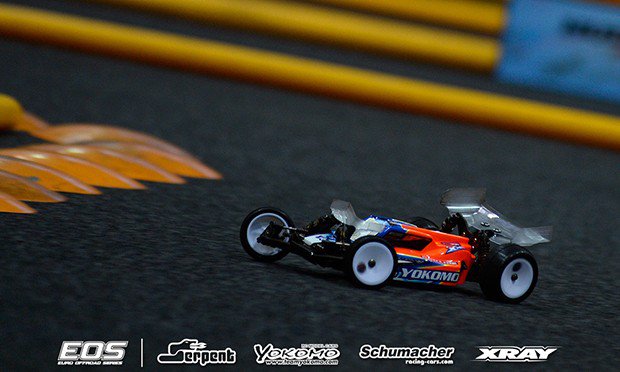 In that JConcepts interview, Jason Ruona said, “I see this being used / tested on all conditions right now. The reason being is typically when a track is low grip it’s also low front grip as well as rear so it will come into play in low and high grip conditions. Ultimately what a driver is looking for is the correct balance for each track and surface and this is just another tuning option for the driver. The things to look for will be size of the track, speed at which you are driving, and outdoor weather conditions. You really should consider the size, attack angle and gurney options on front and rear wings if you are racing outdoors. When the wind gets strong enough to affect the cars jumping consistency it should be a consideration to tune to that as well.”
If you’re a 2WD racer, it might be time to grab your glass of water, pour in some sugar and mix, and start stirring. As long as tracks continue to get faster and traction continues to rise, front wing “Kool Aid” is here to stay.
Unless noted, all photos are from the item’s manufacturer. EOS photos from eos.redrc.net
Flashback Friday
Share:
blog comments powered by Disqus