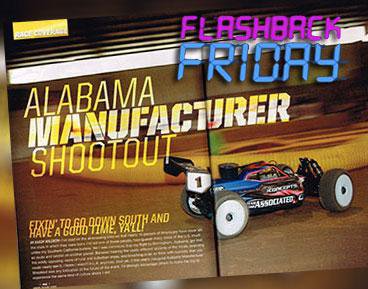 Everybody knows that Friday is meant for reminiscing old times. Each week we take you back in time as we flashback to some of R/C racing's greatest moments, products, drivers, and more!
Flashback: 2010
The inaugural Alabama Manufacturer Shootout
Back in June 2010, I flew from Los Angeles to Huntsville, Alabama and caught a ride to the Cullman Agricultural Center for the first-ever Alabama Manufacturer Shootout. Alan Burton, a long-time racer friend, organized the inaugural AMS to bring the thrill of pro-level racing to the Southeastern U.S. and expose a community of RC racers that hadn’t watched top names like Adam Drake and Ryan Maifield duke it out in person. I was working for Hi-Torque’s R/C Car Magazine at the time, and Alan arranged for me to come cover the event. The race turned out to be an even bigger hit than Burton planned on - and the final entry count was around 370. The raffle included about 175 items (about $35K worth), making it one of the largest I’ve ever seen, and the main events were awesome.
I’ll remember the weekend for several reasons - not the least of which was the fact it was just my second time visiting the Southeast U.S. I celebrated my 24th birthday that weekend, which meant picking up some beer for the hotel on our way from the airport, as Cullman is in a dry county. Jimmy Babcock and Canyon Thompson were hired to run the event, but because their makeshift timing tower was built on the far end of the arena away from the open-air doors and fans, the nitro fumes hit them hard - and they called me in a panic on the morning of main event day asking for back-up announcing help. I talked my way through most of the main events, and then coughed up all sorts of wonderful crud and had no voice for several days after flying home.
Because this was back in the day before real-time website updates (though LiveRC did attend the event to stream it live online), I had the chance to race - and brought along my trusty Kyosho Ultima SC to compete in the popular 2WD short course class. After struggling with tire choice in qualifying, during which I set the fastest time but didn’t have consistent points results, I got it hooked up for the main event and pulled over a half-lap lead…before my brushless system overheated and my truck rolled to a stop on the back stretch with about 90 seconds to go. The TQ, Shannon Amos, inherited the lead for a short time before his motor also went up in smoke. The smile on David Johnson’s face during the trophy photos was priceless, but my co-workers refused to let me live down the loss for months after that.
Here’s the article I wrote for the October 2010 issue of R/C Car: 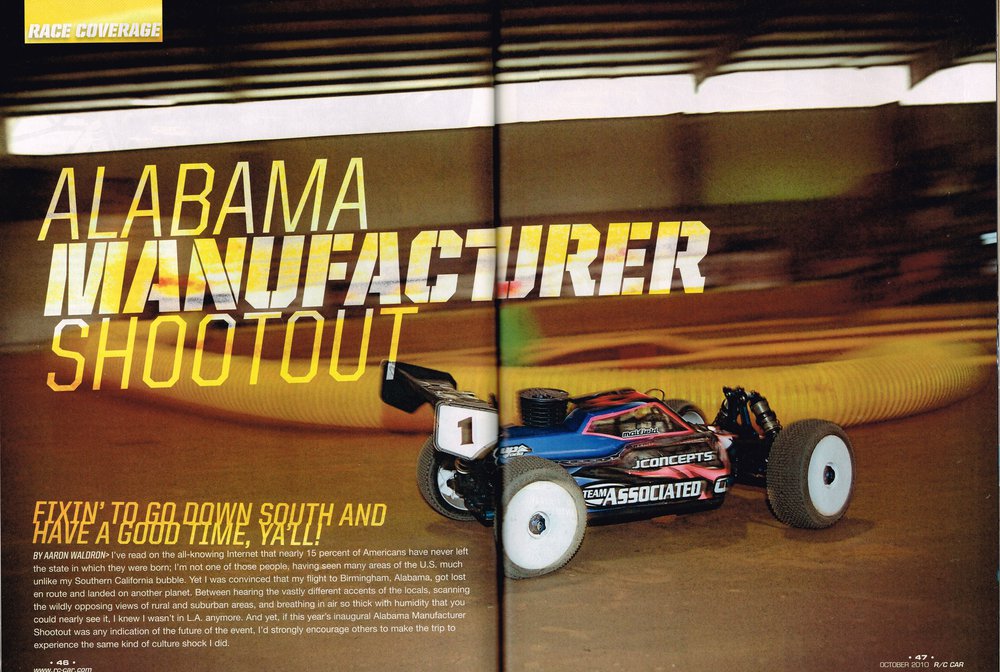 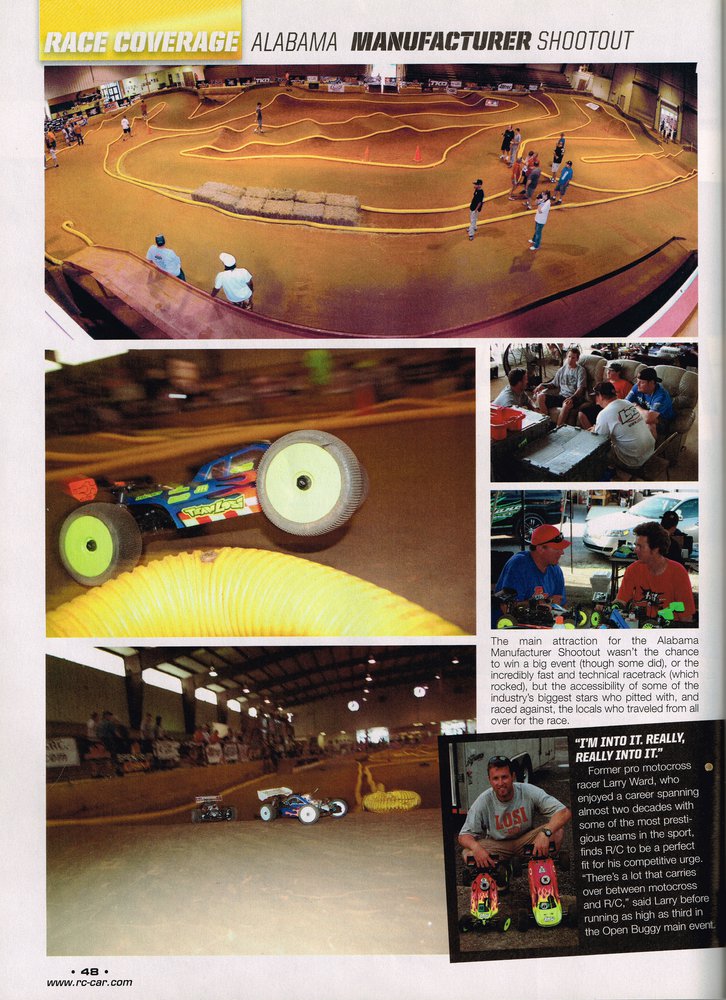 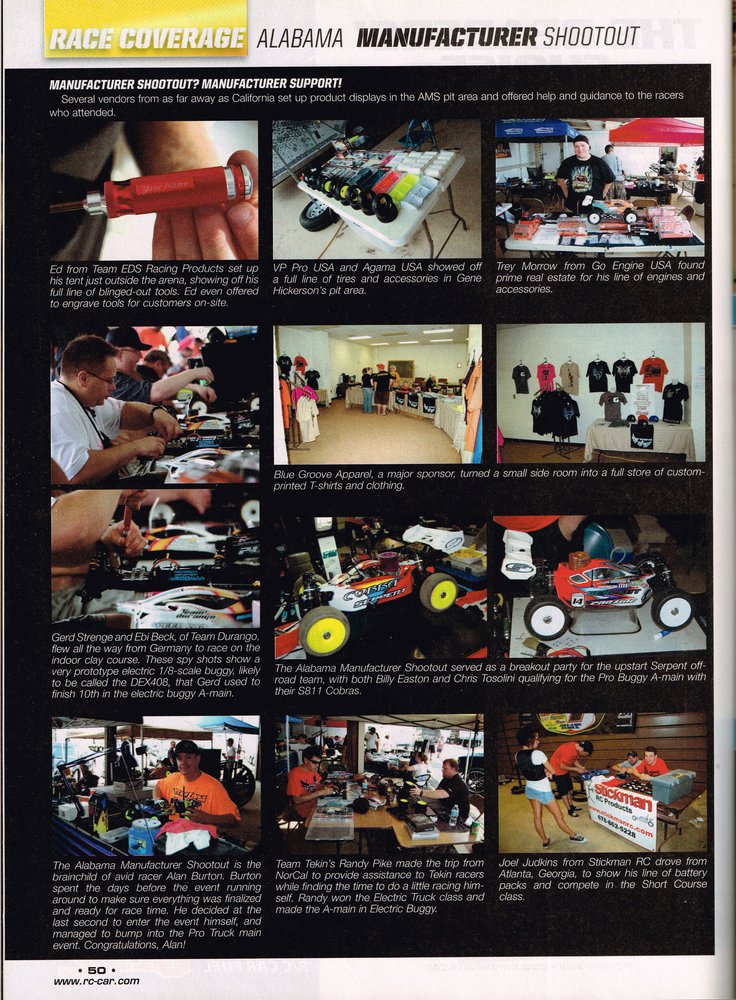 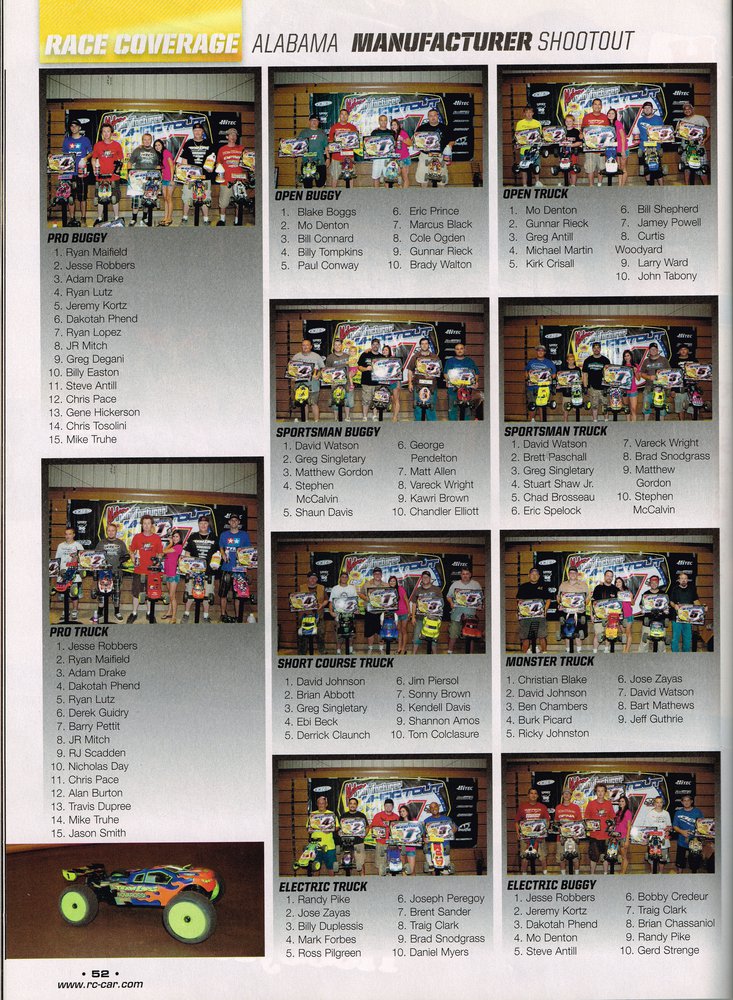 JConcepts put together this video about the race and created a gallery of photos:
jconcepts.smugmug.com/RC-Racing-1/Alabama-Manufactures-Shootout/i-mZM4DPW
Chris “Big Nasty” Allen shared this gallery of photos on the event’s RCTech thread:
picasaweb.google.com/112553512680348464940/Alabama2010#
And RCTech user “Jed the Geezer” shared a gallery of photos as well as videos:
www.flickr.com/photos/12248057@N02/albums/72157624121502377
You can watch the seventh annual Alabama Manufacturer
Shootout - AMS 7.0 - live this weekend:
live.liverc.com/662-AMS_70/
Flashback Friday
Share:
blog comments powered by Disqus