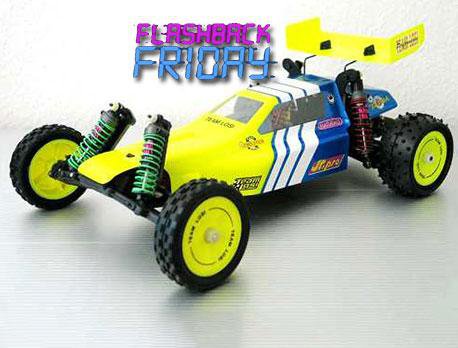 Everybody knows that Friday is meant for reminiscing old times. Each week we take you back in time as we flashback to some of R/C racing's greatest moments, products, drivers, and more!
Flashback: 1988
Every Team Losi Racing 2WD buggy released
Team Losi Racing released the 22 4.0 this past week, which was the brand’s fifteenth different top-level 2WD buggy kit over the last 29 years. Though the original RC10 was challenged by the Kyosho Ultima (which Joel Johnson drove to the second-ever IFMAR title in 1987), it wasn’t until Team Losi’s JRX-2 came along that truly pushed the 2WD class into overdrive - propelling the category to its position as the industry’s most prestigious racing class and helping drive innovation forward for decades to come.
In celebration of the 22 4.0’s release, here’s an in-depth look back at each Team Losi Racing 2WD buggy - along with whatever photos I could scrounge up on Google Image search.
JRX2 - Released in 1988
Though the RC-10 relied on traditional A/H-arm suspension, Team Losi introduced an innovative 5-link setup for its first 2WD buggy, the JRX-2, which shone on the rough and loamy tracks of the time. The car came with 2.0-inch orange 5-spoke wheels and what Losi called the LRM - or Low Rotating Mass - transmission. 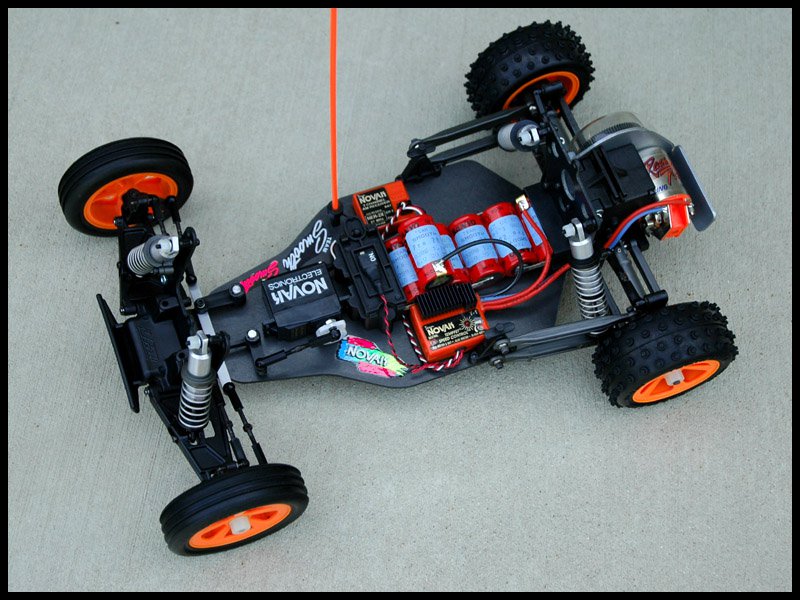 In 1989, Team Losi released the Proformance Kit to upgrade the JRX-2, which included a longer graphite plate chassis, a conversion to H-arm rear suspension, and dish wheels with Team Losi on them. 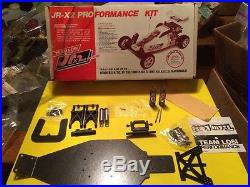 JRX Pro - Released in 1990
The JRX Pro reflected the changes the Proformance kit introduced to the JRX-2 - but included everything in one box.

Junior 2 - Released in 1990
The Junior 2 was Team Losi’s first budget-friendly racing kit - two decades before the first Ready-To-Run. The Junior 2 included bushings instead of bearings, a molded plastic front shock tower, and the first molded plastic composite chassis in a modern 2WD racing buggy - which influenced the development of 2WD buggy racing for the next 20 years. The Junior 2 also had a truck variant, the Junior T, which had different wheels and tires, and body mounts, making it easy to switch between the two. 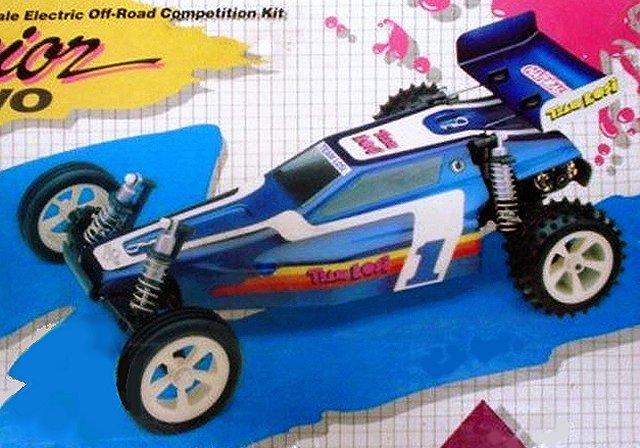 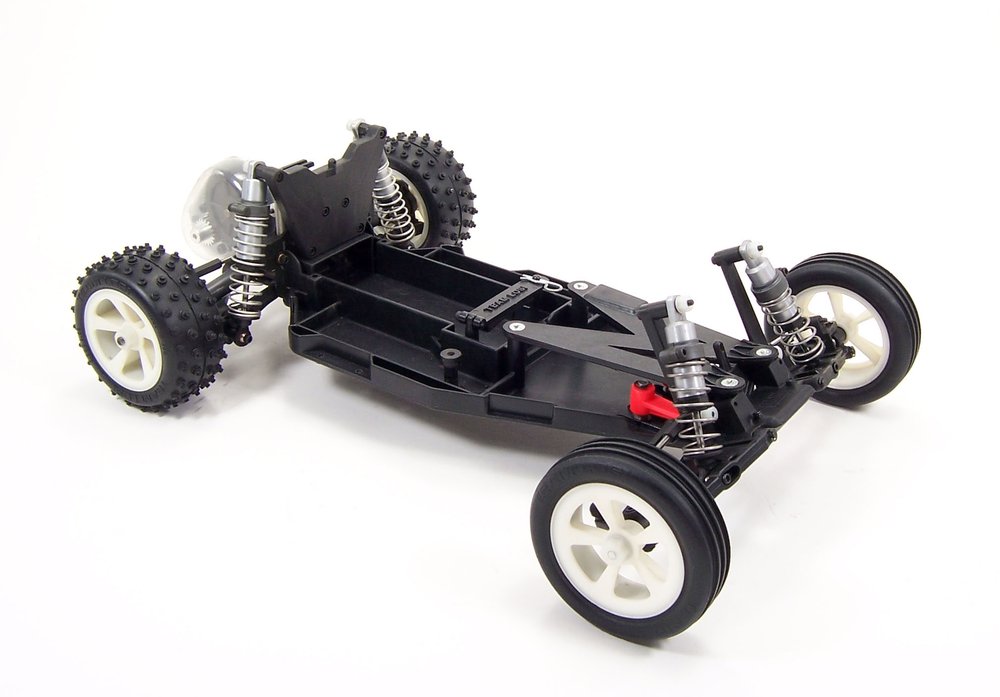 JRX Pro SE - Released in 1991
The JRX Pro SE (or Special Edition) used a molded chassis based on that employed on the Junior 2. It also came with the series’ first slipper clutch, as well as black-anodized shock bodies with new spring clamps. 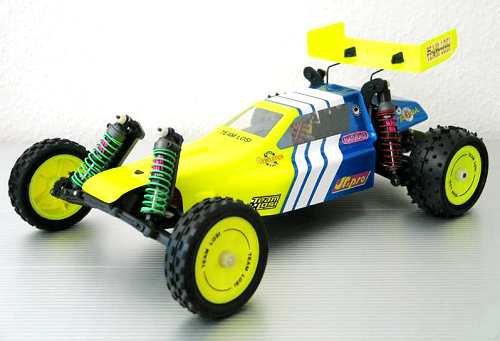 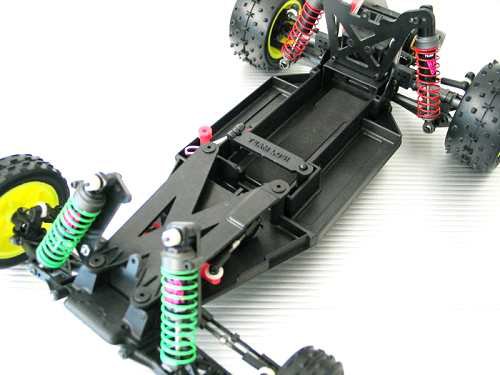 XX - Released in 1993
The XX debuted at the 1993 IFMAR Worlds in Basildon, England, where Joel Johnson earned TQ but was beaten by Brian Kinwald in the finals. The car featured a new tunnel-shaped molded chassis, with raised sides that increased clearance during cornering but kept the weight of the battery down low. The black-anodized shocks were a carryover from the Pro SE. The front bulkhead assembly used two hinge pins that allowed the top brace to swing forward for servo access - but made it easier to break the chassis. The kit originally included a gray “retrofit” transmission that was available as an option on later LX-T stadium trucks before the black transmission from the XX-T was added. Rather than reinforcement ribs facing inward, the 2.2-inch wheel design was reversed and used a Lexan dish on the outside to protect dirt from being trapped. 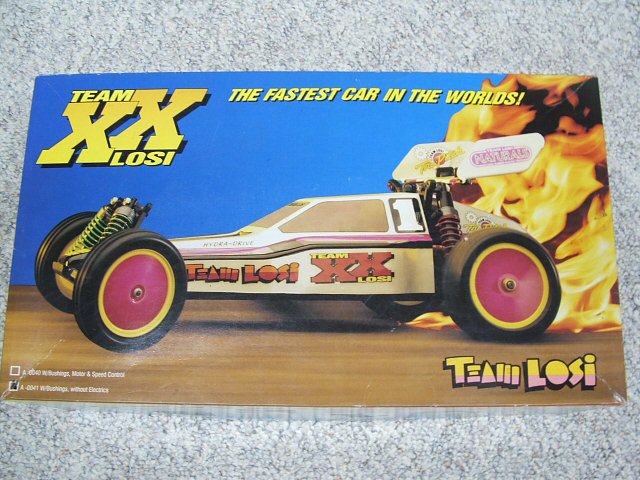 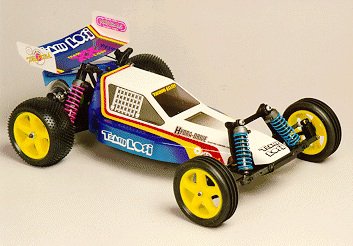 XX ‘CR’ Kinwald Edition - Released in 1997
After nearly 20 years of trying, Team Losi captured the company’s first-ever IFMAR World Championship in 1997 - with Brian Kinwald leading a Team Losi 1-2 finish at the company’s home track, the Ranch Pit Shop in Pomona, CA. To celebrate, Team Losi released a limited edition kit with a long list of option parts including full graphite-composite chassis and suspension components, Lunsford titanium turnbuckles and MIP CVD’s. Rather than the Hydra Drive, the XX ‘CR’ KE used the dual-disk slipper from the recently-released XX-4 4WD buggy. The car looked different, too, thanks to a blue-anodized motor plate and aluminum hardware, X-Celerator body and cut-down front shock tower (which was cosmetically narrowed and removed the outermost shock mounting hole). As a cool trick, the rear shock springs were coated blue - but were actually the same rate as the standard ‘pink’ springs - and the option was only available in the kit. The XX ‘CR’ KE also included modern-style yellow dish wheels. 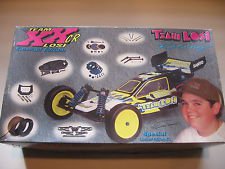 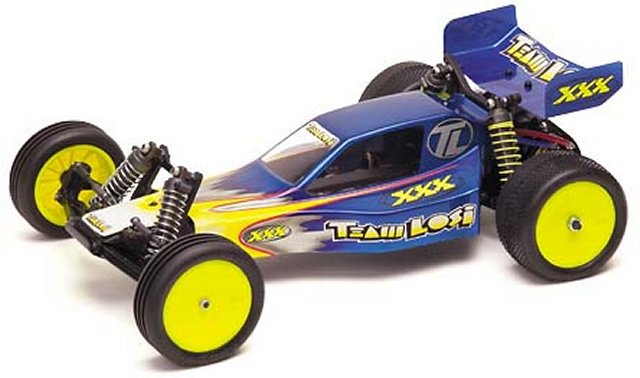 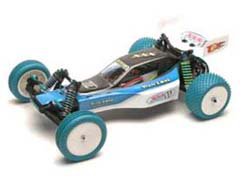 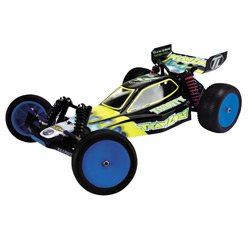 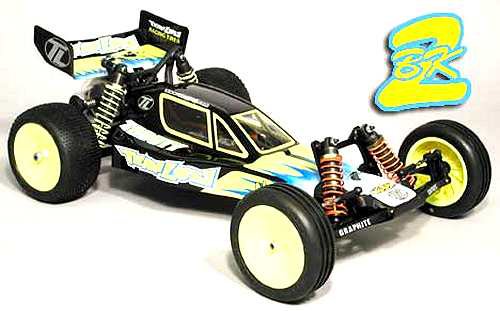 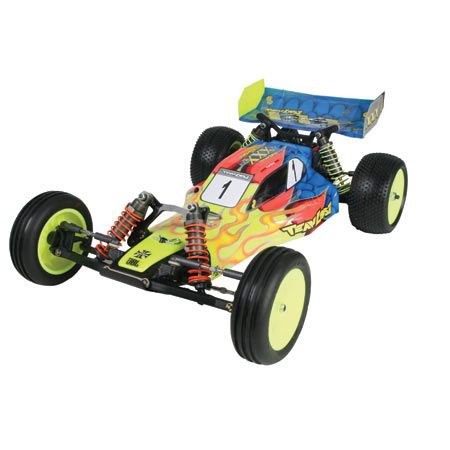 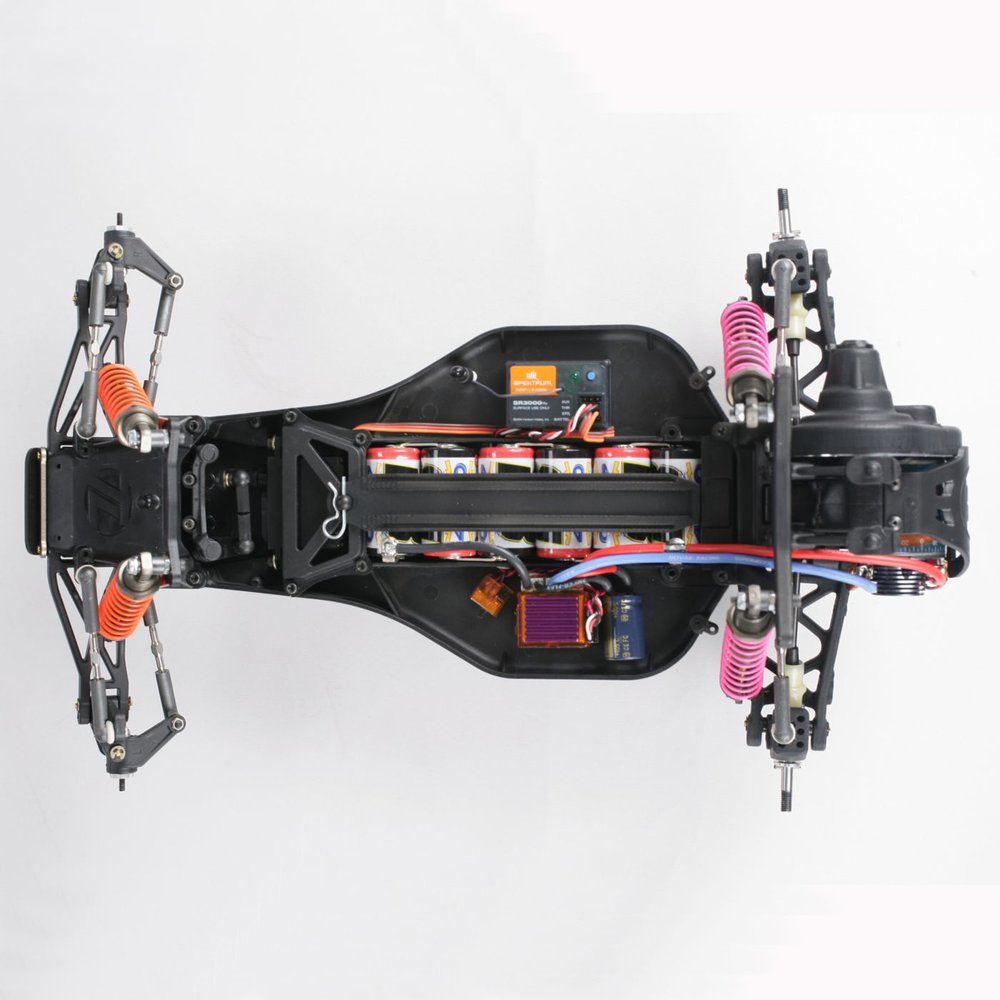 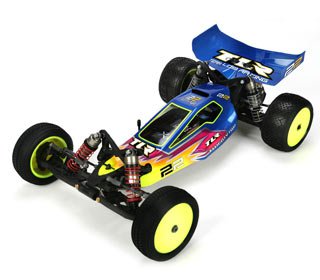 The 22 was also the first of the brand’s 2WD buggies to be offered in RTR form, with Losi’s short-lived Xcelorin brushless system and Spektrum radio gear. The 22 RTR was branded “Losi” rather than TLR. 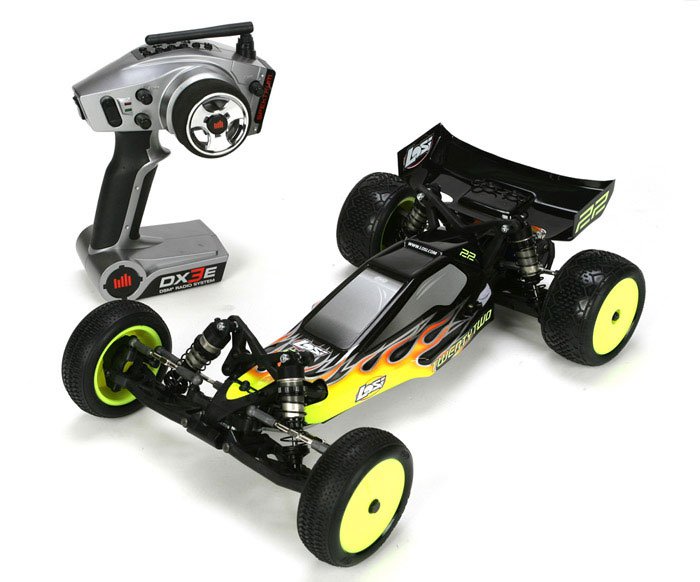 22 2.0 - Released in 2013
The second-generation 22 buggy came with revised front suspension geometry, a new steering rack, revised rear hubs, Gen II shocks, and an updated differential. The chassis also used a hard battery strap rather than Velcro. The chassis was modified to accept a saddle pack when built in mid-motor configuration. 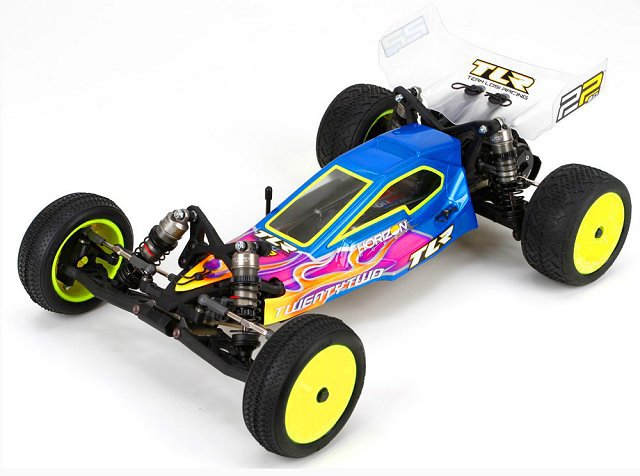 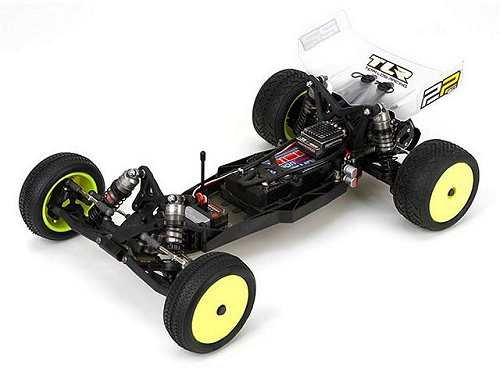 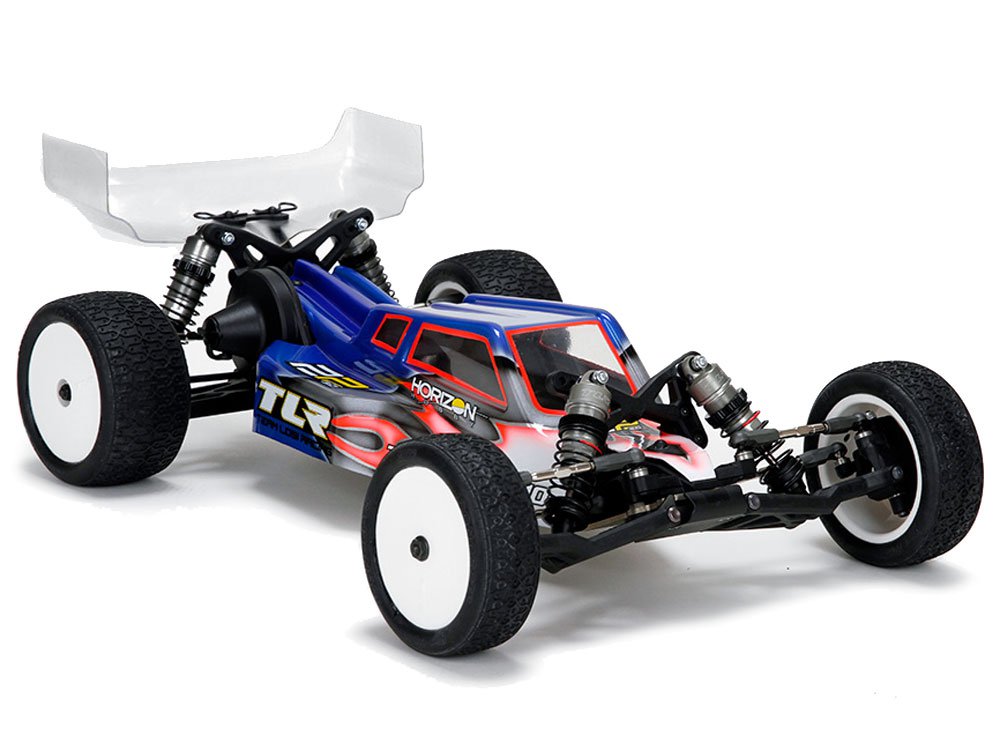 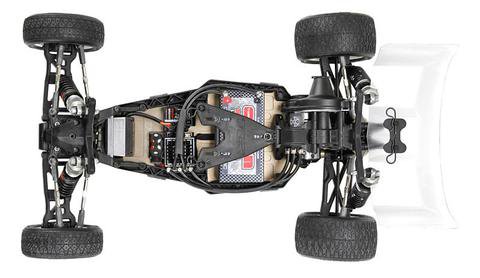 In March 2016, TLR introduced a new lay down transmission for the 22 3.0 buggy to be used on carpet and astroturf tracks that required a new aluminum chassis, new tranny case and motor plate. The conversion kit also included an aluminum idler gear, aluminum rear hubs with revised geometry, a carbon fiber battery brace, a brass weight plate, a new body and necessary hardware.

In December 2016, TLR released the “Dirt Laydown” transmission with a new chassis that was designed to reduce flex and would also accept the standard, stand-up transmission. The tranny case was machined from Delrin, and the kit included a carbon fiber battery strap with aluminum mount, aluminum idler gear, and a new milled motor plate and chassis brace plate. 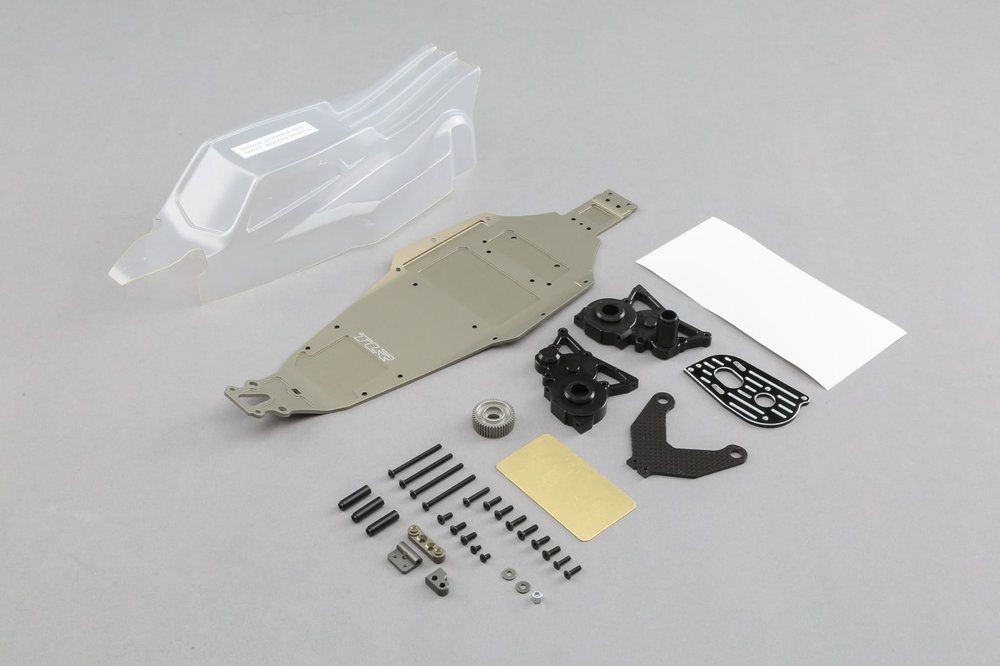 22 3.0 Spec Racer - Released in 2016
Based on the 22 3.0, the Spec Racer employed a long list of weight-saving measures: a lightened aluminum chassis, composite outdrives and aluminum diff hubs, aluminum driveshafts with lightened axles, ultra-lightweight 0.5mm Lexan body, lightweight motor plate with Lexan gear cover in place of the molded gear cover used on the other 22-Series buggies. 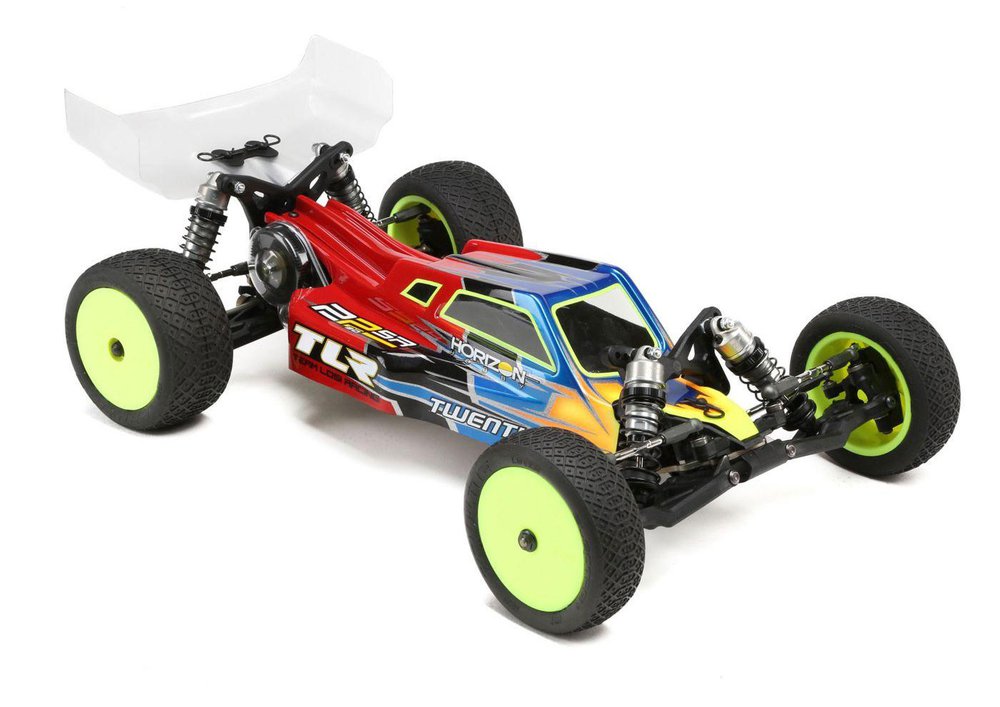