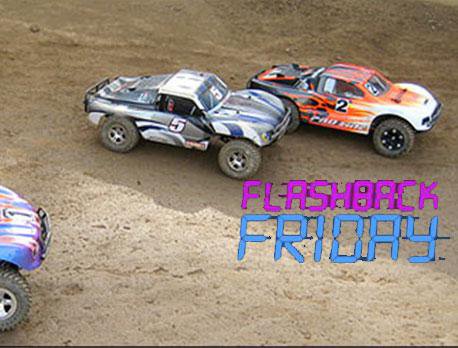 Everybody knows that Friday is meant for reminiscing old times. Each week we take you back in time as we flash back to some of R/C racing's greatest moments, products, drivers, and more!
Flashback: 2008
First and only Traxxas Slash and Slayer Off-Road Championship
Just a few months after announcing the Slash 2WD electric short course truck and nitro-burning Slayer 4x4, Traxxas organized the “Slash and Slayer Off-Road Championship” at Pegasus Hobbies in Montclair, CA. Slash Spec class racing had blown up across the country, and Traxxas looked to capitalize on the surge of popularity to draw a crowd - and offered up a pretty sweet prize purse of over $5700.

I was working for now-defunct R/C Car Magazine at the time, and Traxxas knew how pumped I had been on racing the Spec Slash class - so they called my office a couple of days before the race. After I confirmed that I planned on attending (duh!), the Traxxas marketer who called me asked if I was racing the Slayer class.
I responded by saying that our test model was pretty torched after the photo shoot and subsequent radar testing (this was before RTR’s came with 2.GHz radios), so I just planned on racing Spec Slash and having an easy day.
“What if we send you a new truck?” he asked.
This was Wednesday afternoon. The race was Saturday. Traxxas is in Texas, and I was in Los Angeles. I laughed.
“I’ll overnight one tomorrow, with a bunch of optional parts for it,” he said as he tightened his figurative grip on my arm. This plan meant that I would receive the truck on Friday, probably in the afternoon - less than 24 hours before qualifying started. What could possibly go wrong, right?
“Fine,” I said, laughing at what I was agreeing to get myself into. “I’ll take one with a black and red body - I doubt I’ll have time to get anything painted.”
Sure enough, the truck showed up to our office around 3:30. After I scrambled to install a Spektrum receiver and the completely unnecessary, but super cool looking, red aluminum parts, I took it out to the parking lot with a quart of fuel. Without the time or patience to properly break the engine in, I “four-stroked” it for a few tanks, ran it up and down the street a few times, then packed up and went to the sushi bar for happy hour.
Not only does Pegasus have a wonderful outdoor racing facility, but it’s right off of Interstate in Montclair, CA - and you can see a huge RC truck jumping out of the building. Seated pit tables with overhead shelf and a permanent concrete drivers’ stand make for what locals call “the stadium.” 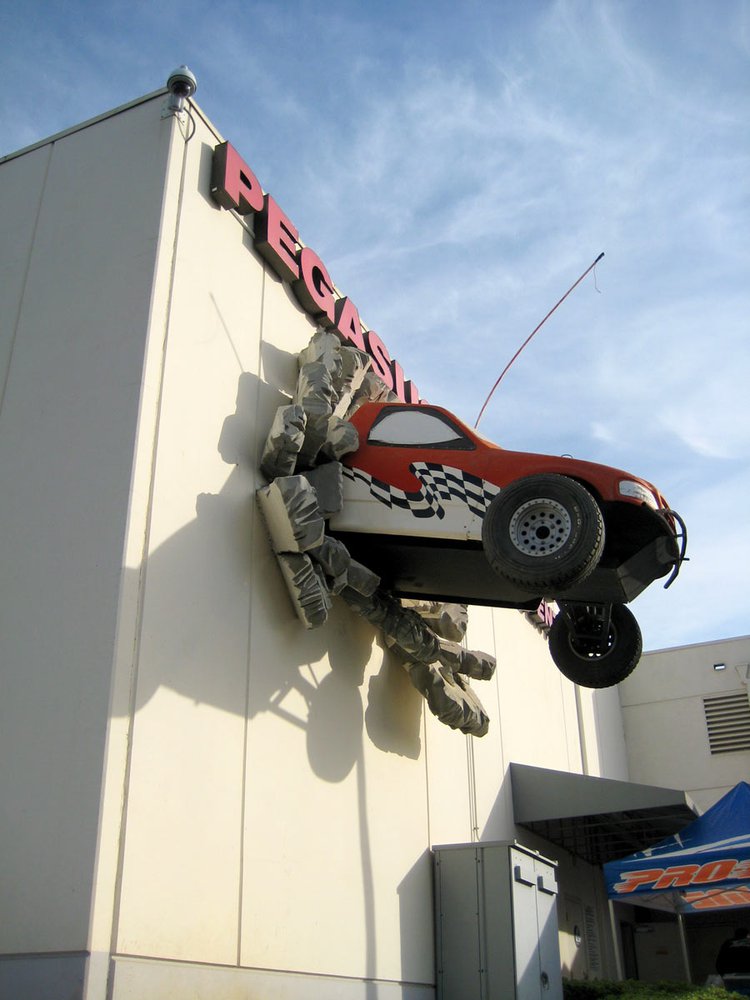 The event hosted four different racing classes: Spec (stock motor and ESC, only Traxxas option parts allowed), Expert Slash (open electronics, only Traxxas option parts allowed), Open Slash (anything goes), and Slayer.
Traxxas offered up $725 for the top five finishers in each of the three 2WD Slash divisions, broken down like this: $300, $200, $100, $75 and $50. That seemed like a lot, until racers learned of the Slayer class payout of $3550 allotted to the entire top ten: $700, $600, $500, $400, $350, $300, $250, $200, $150, and $100. With entry fees of just $30, that was a lot of cash to win!
The relatively large dirt course was configured into a C-shaped track littered with jumps, and two split sections - one in the very back, and one through the center of the track. The fastest Slash drivers could pull off 1second laps, while the Slayer drivers dipped into the high 18’s as they made up time through the faster sections of the track.

Naturally, that kind of money got people involved - a lot of them. Nearly 80 entries turned up for the one-day deal, with many racers in the competitive SoCal racing scene picking up trucks solely for the event. Greg Hodapp, one of the fastest racers in the 90s who came out of retirement to win the 2005 ROAR 4WD National Championship, entered all four classes. STRC founder Steve Wang was there, as well as Keith Whisler - then of Slingshot Batteries, now working for Horizon. Magazine editors from three different titles competed.

Predictably, practice on Saturday morning was chaos. I ran my Slash to make sure it was good on a NiMH stick pack, since matched packs and LiPo batteries weren’t allowed, before turning attention to the Slayer. Unfortunately, the glow plug that I abused so badly the day before failed. By the time I got a new one to replace it, and tuned the truck so it would actually run, practice had ended. Oops.

Just days prior to the race, Pro-Line had just released the Switch - the first-ever optional tire for short course trucks, and an aluminum beadlock wheel. They weren’t legal for the Spec class, and many racers felt they’d be too heavy to run on the electric truck anyway. I was offered a set for my Slayer, though, and figured it couldn’t hurt. I mean, I still hadn’t driven the truck on the track yet.

Running Traxxas fuel too. So factory!
Unsurprisingly, Hodapp dominated qualifying with the fastest time in all three electric classes, and local Pegasus Hobbies heroine Holli Bechard earned TQ in Slayer. Out of 27 entries in Slash Spec, I qualified third behind Hodapp and another local off-road veteran, Jake McGarvey. In the first round of Slayer qualifying, my receiver fell out of the bottom-loaded box and I pulled off rather than risk dragging it along the ground. Thankfully, I drove well enough in the second round to make the A-Main out of the 15 entries.
One of the optional parts I had installed on my Slayer was the sway bar kit - which, given the high center of gravity of the Slayer, ended up being WAY more important than I had originally guessed. And the added grip of the Pro-Line tires more than offset the weight disadvantage. I was excited for the 30-minute main event.
Before that, though, I got smoked in the Slash Spec class. Hodapp pulled away and left the rest of the field for dead, and I had nothing for McGarvey. Here’s how we finished.

Slash Spec A-Main
Hodapp nearly won the Expert class as well, which he had entered with his Spec-class truck, but his truck rolled to a stop with 30 seconds left to go in the 6-minute final. The DNF turned the battle between McGarvey and Whisler for the podium became the battle for the win, and McGarvey held on for a 1.2-second victory. Matthew Crownder finished about a half-lap back.

Expert A-Main
The Open class final was a return to form for Hodapp, as he nearly lapped the field on his way to the win. McGarvey finished second again, with Ed Garcia edging Ray Velasquez in a great battle for the last step on the podium.

Open A-Main
The 30-minute Slayer final was a mess. There was no pit lane, so the pit men huddled together at the end of the straightaway and tried to dodge traffic while filling up the trucks 3-times throughout the race. And to make matters worse, the timing software was screwing up everyone’s laps.
I tried my best to focus while there was so much craziness going on - drivers yelling at the announcer for calling off the wrong running order, pit men falling like flies as they got hit in pit lane, and turn marshals who were not prepared to sit for a half hour after running a six-minute main event. Plus, it was getting dark. Fortunately, I was an avid nitro racer at the time - so a thirty-minute run was a piece of cake. And because I planned on driving calmly, I decided to try for ten-minute pit intervals and only stop twice.
It paid off. After the race director went through and calculated the missed laps, I was credited with the win, with Hodapp second and Bechard third.

Slayer A-Main
Unfortunately, the Slash and Slayer Off-Road Championship never happened again - making the name "first annual" sound pretty silly. The event did serve as a pilot, however, helping to convince Traxxas to offer similar Traxxas-only spec racing events in the pit area at TORC tour stops. Sunday, November 22, was the seven-year anniversary of the Slash and Slayer Off-Road Championships. (Click here for a full list of the results.)

Going big on the back double.
Photos: Traxxas 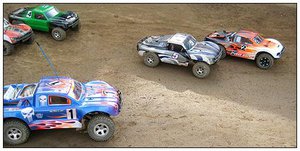