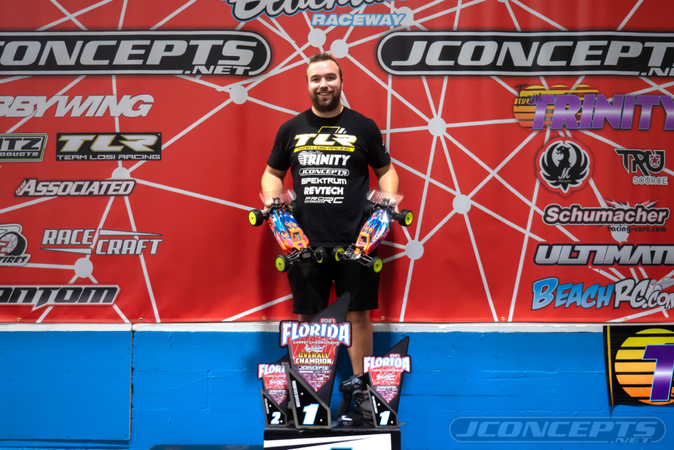 Cocoa, Florida: The Space Coast, The Kennedy Space Center,  The Cape Canaveral Air Force Station, the Surfing, and the Beaches are what put this place on the map. However, this weekend a world-class event would take place there at at local track known as Beachline Raceway. Drivers from all over the world would be attending for the 2021 Florida Carpet Championship! To highlight a few:

The schedule consisted of the Following: We arrived around 2pm on Thursday to set up and prepare for practice that would run from 5pm to 8pm. Friday there would be open practice divided by stock and mod drivers from 8am to 1pm. Front there we had a round of seeding and then one round of qualifying. This allowed Saturday to finish around 8pm in which we had 2 more rounds of qualifying. We had lower mains Saturday night and Sunday was completely B and A-Mains.

Beachline put down new carpet just for this event, therefore going into it we were unsure of which tire would be the absolute go-to. We had an idea that it would either be the Swagger/Twin Pin duo or the Fuzz Bites. When we arrived we tested both, but by time qualifying came around we all decided on using Fuzz Bites. They were a little edgier to drive but overall were the faster tire. We ran Fuzz Bites all the way around in 2wd and in 4wd some drivers chose to run Swaggers in the front and Fuzz Bites in the rear. The track layout was enjoyable to all of our drivers. Check out the layout below:

The Super Pole was only for the 2nd-5th place drivers in the 2wd & 4wd Modified Buggy A-Mains. Each driver got 3 warm up laps and 5 counted laps. The driver that could put down the fastest lap would start 2nd on the grid and so on and so forth. Here’s how the grid turned out:

A1: Dakotah Phend was able to lead the entire race without any issues. He cruised through the track beautifully and maintained his 8 second lead over 2nd place. Broc Champlin was running 2nd until lap 8 where he fell back into 3rd and Michal Orlowski took over 2nd. Champlin was still surging to hold a strong position. Ryan Cavalieri was on his wing driving hard. On the 2nd to last lap Cavalieri was able to move into 3rd and finish out a top 3 position. The race completed with Dakotah Phend in 1st, Mical Orlowski in 2nd, and Ryan Cavalieri in 3rd.

A2: Dakotah Phend was determined to take an early win so he got to work in A2. He was able to lead the entire race from tone to tone. Champlin was running 2nd but fell down the pack after a little bobble. Michal Orlowski capitalized and took over 2nd. Meanwhile, Lee Setser had been waiting for the perfect opportunity to slowly bump up spots as drivers in front of him started making mistakes. On lap 4 Rivkin and Cavalieri made a mistake allowing Setser to move into 4th. He cruised there for a minute until Orlowski and Tessmann had an issue around lap 11. By lap 12 Setser found himself in 2nd place and he was holding on to his lines with everything he had. Truly, one of the highest finishes of his great 2021 year. Meanwhile, Spencer Rivkin was climbing back up into position and ultimately was able to finish 3rd. The race completed as Dakotah took an early overall win, Lee Setser 2nd, and Spencer Rivkin finished 3rd.

A3: A3 was open to many possibilities. It was a battle for the final two podium spots. Broc Champlin made this his comeback race as he pushed hard to maintain the lead for the entire 5 minutes. He was surging with the hot lap of 16.458 and the only driver to sub 50 for his top 3 consecutive lap times, he was serious. Michal Orlowski was running 2nd for the majority of the race until about lap 11 where he had a bobble and fell back into 7th. The field moved up a position. Rivkin moved into 2nd and Cavalieri into 3rd. The race concluded with Champlin in 1st, Rivkin in 2nd, and Cavalieri in 3rd!

A1: Michal Orlowski was the overall TQ and started 1st on the grid. He had a fast buggy all weekend and maintained his lead the entire race. The main battle was for those other top 2 spots. Martin Bayer was thriving from laps 2 to 7 but after a crash, Ryan Maifield and Ryan Cavalieri moved up into 2nd and 3rd. It was a battle between the two Ryan for that position. Maifield was driving hard in 3rd before Spencer Rivkin got up in the mix for two laps taking over 3rd. Maifield determined to take it back ultimately was able to regain his 3rd place spot. The race concluded with Michal Orlowski in 1st, Ryan Cavalieri in 2nd, and Ryan Maifield in 3rd.

A2: The A2 of 4wd was relatively uneventful for those first 3 positions. Michal Orlowski was ready to wrap up his weekend with an early win and went on to win A2 for the overall. Dakotah Phend had an iffy A1 but was ready to take back his spot in A2 and A3. He was able to hold to 2nd place for the entire duration of the race as well. Finally, Ryan Cavalieri was able to cruise in 3rd the entire main. The race concluded with Michal Orlowski in 1st, Dakotah Phend in 2nd, and Ryan Cavalieri in 3rd.

A3: Mical already wrapped up the win in A2 so Phend started in the lead position. He didn’t want to give up his spot as 2nd on the podium or the possibility of taking the overall Champion title. He put the hammer down and led the entire main! With a hot lap of 16.7, 98.9% consistency, and a fast top 3 consecutive lap time of 49.44 he was gone with a 5-second lead when he finished. 2nd place was a different story. Ryan Cavalieri started out in 2nd, had a bobble, and fell down to 7th. Martin Bayer was ready to take advantage of this and took over 2nd place. Come lap 10 Bayer had a setback which allowed Champlin into the 2nd position. Jorn Neumann was lurking in the background and when Champlin gave an inch Neumann made his move to take over 2nd. When Champlin fell back Rivkin was able to move up one position into 3rd. The race finished with Phend in 1st, Neumann in 2nd, and Rivkin in 3rd.

Due to Phend’s 2wd Mod victory and 4wd 2nd place finish, he was able to take the overall Modified Buggy Championship title for the weekend! He truly had a flawless weekend in 2wd Buggy between top seeding, taking the overall TQ, and winning every main! It was only the weekend before when he had won Pro Nitro Buggy and Nitro Truggy at the Alabama Manufacturer Shootout 12.0! He’s closing out the year on a high note! Congratulations Dakotah! We have a handful of events left for the year. 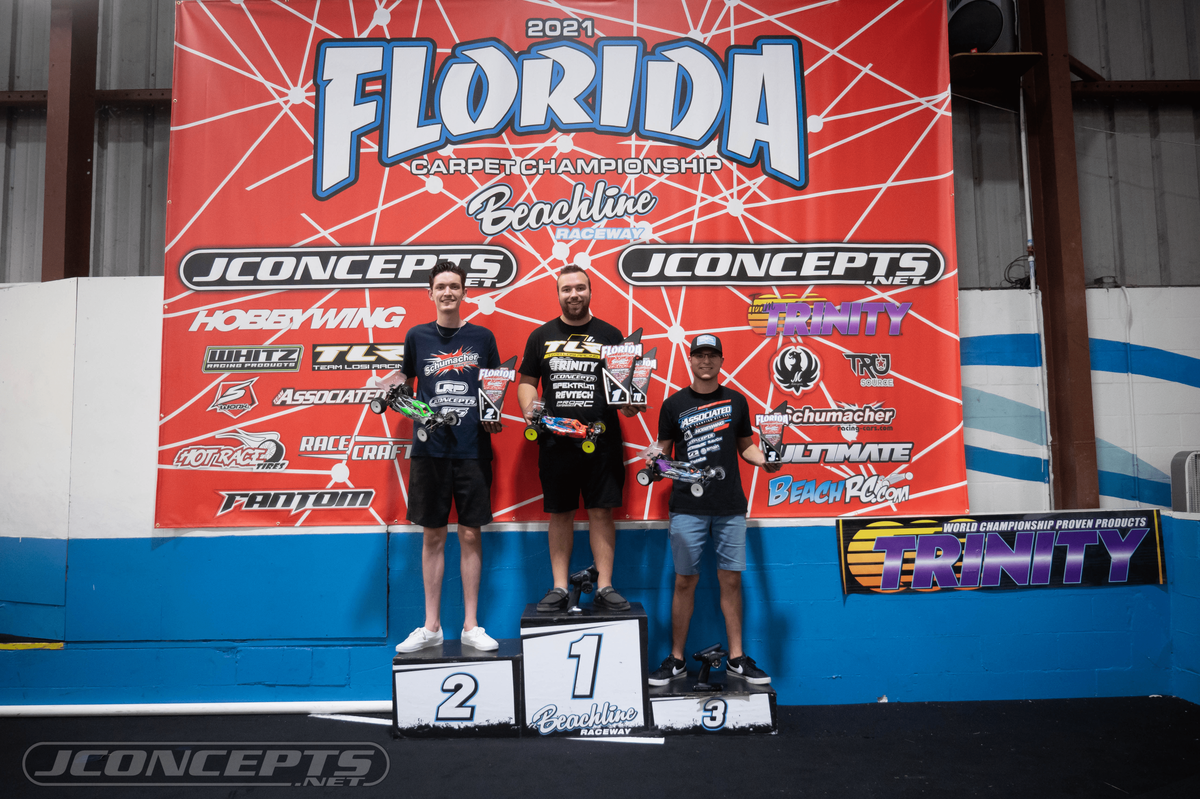 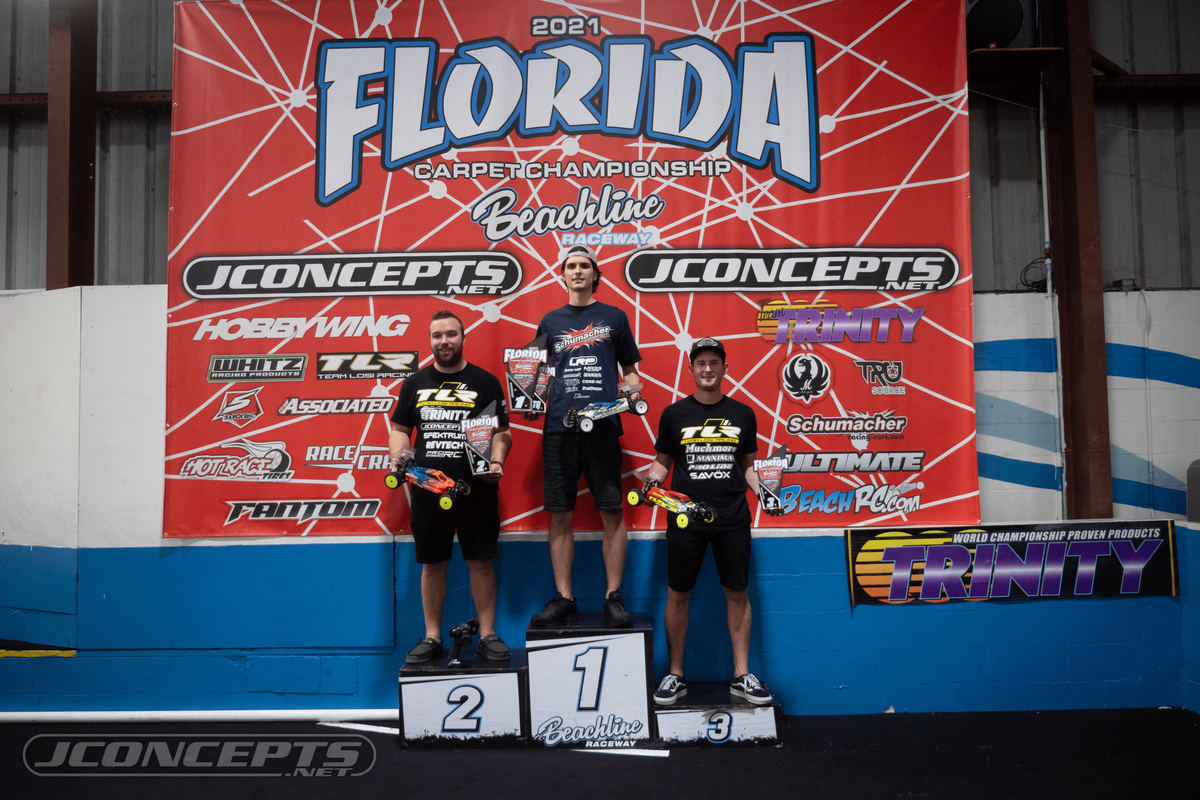 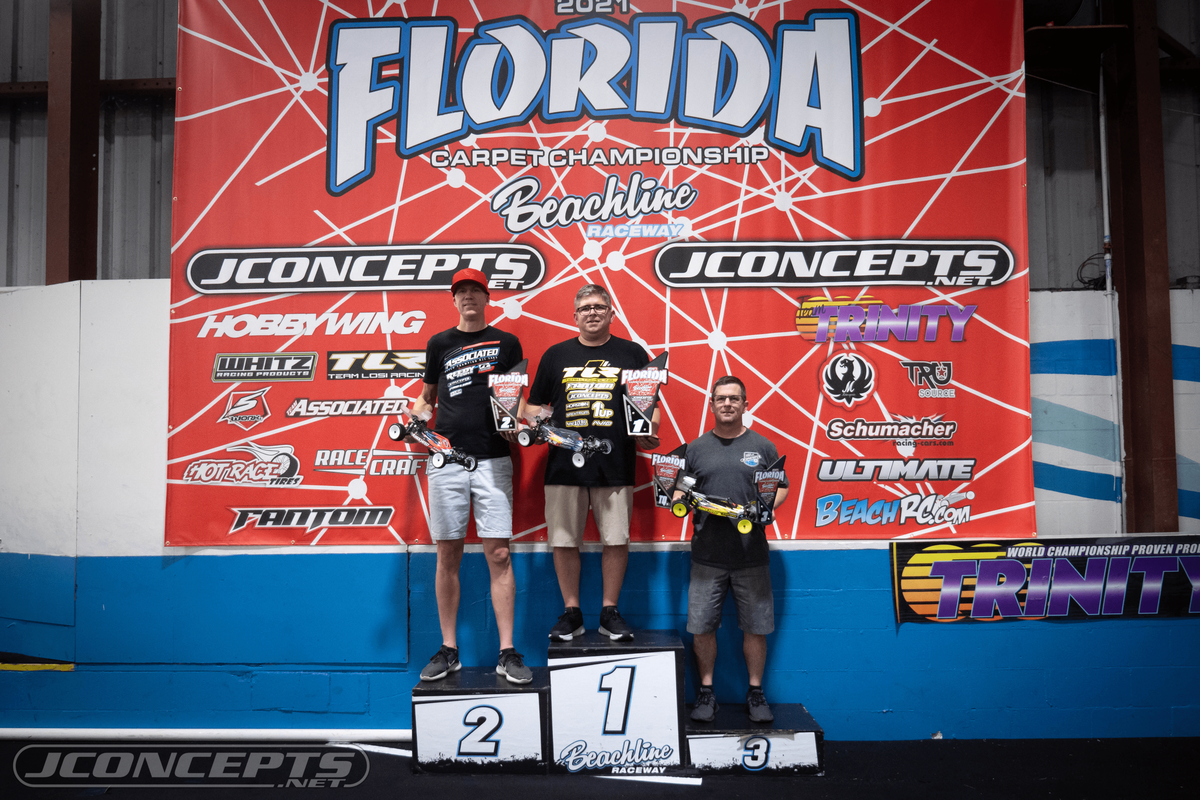 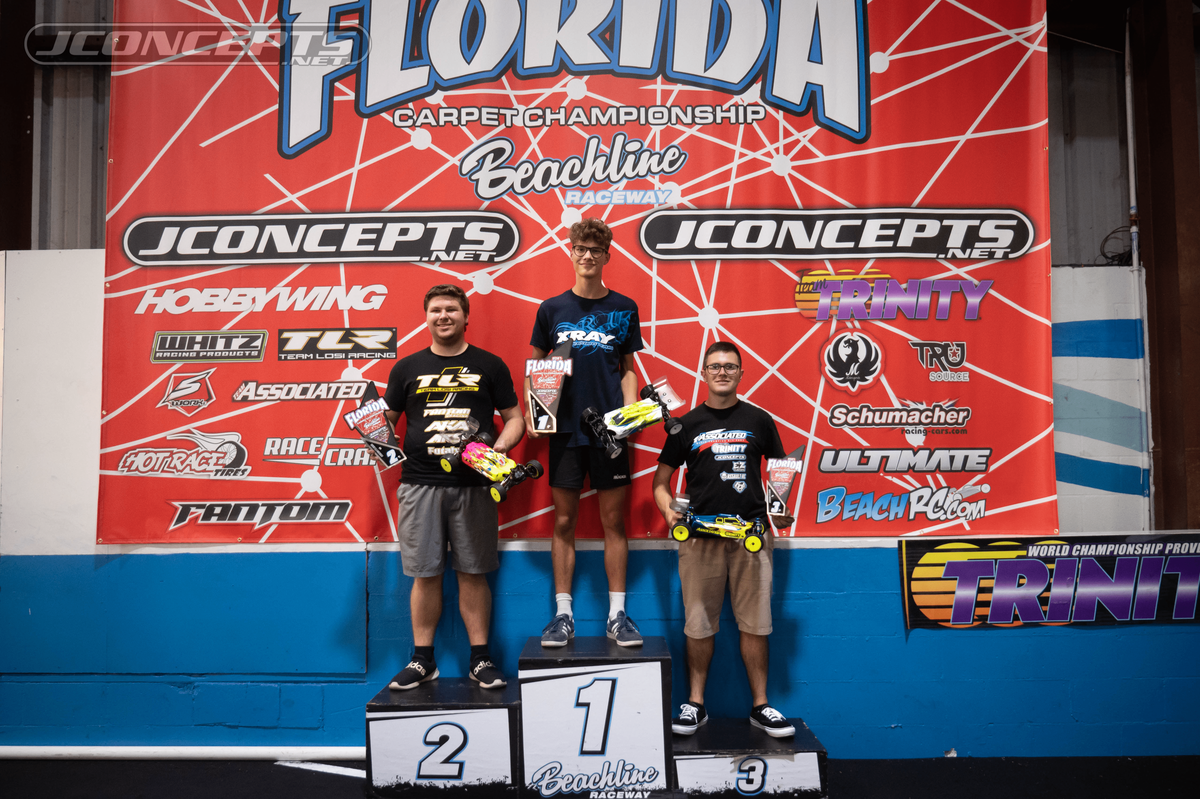