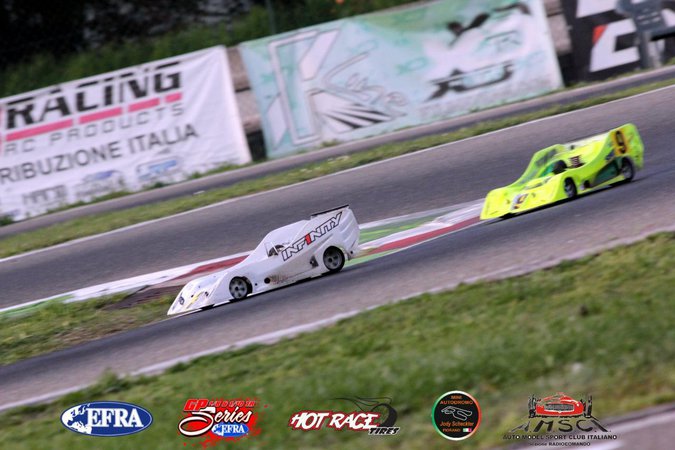 The first EFRA GP SERIES is over.

Due to forecast on Sunday the race had to be managed within two days in order not to take any more risks. Yet,as predicted, on Sunday morning-left as a free day- there were definetly a "wet, wet" conditions. Thursday was the day dedicated to free practise by groups: during the main part of the day all drivers could get a lot of track time, but in the last FP round rain came again and broke the original plan.

The second day has been a very busy day. At 9 in the morning there has been a briefing with all the drivers under the rostrum with an emotional minute of silence for passing of our president Dallas Mathiesen. As predicted from the Weather forecast Sunday would have had bad weather so the decision was to go with planB, which meant moving all race program in Friday and Saturday. People all seemed to understand the decision, hoping that everything went fine for the next days.

The german Dominic Greiner and swiss Simon Kurzbuch qualified for early TQ. They both said they soon reached a good feeling with the track,even with those very changable forecast.

Saturday has been maybe the hardest day, for it had to concentrate the last round of qualifying, the super pole and the finals. At the time of SP, as it has already happened in previous races- time stopped and the lights were all on the 4 drivers for each category. It was very nice how other drivers do really support drivers from other teams: here was a change to underline how this sport actually goes beyond the natural rivalry. From the outside, you would have seen happy faces and big laughs, concentration and mindthinking as well, but on and under the rostrum.

For 1:8 drivers it would have been between the swiss Silvio Hachler and the italians Andrea Pirani, Alessio Mazzeo and Dario Balestri. It has been a long but pure battle to the millisecond. Finally current IFMAR WC Dario Balestri took the honour to bump up directly to the final.

For 1:10 it was up to Teemu Leino, Francesco Tironi, KYle Branson and Toni Gruber that it had to be chosen the second direct finalist. The Italian Infinity driver, kept his concentration at the maximum level and after a couple of laps he took the well deserved fist super pole of his career.

In the 1:10 final the World champion Dominic Greiner took -at least at the beginning- an easy win, driving his Serpent pink and black car. The Xray italian driver Alessio Mazzeo soon got very close to the German- it was a kind of remind of the world championship in Gubbio - and 3rd plac was for Dirk Wiscnewsky driving his Mugen with a great pace.

For 1:8 Simon Kurzbuch flew after the bell ring and managed to add another title in his book. In second position Dario Balestri and Carmine Raiola.

A big news introduced at the EFRA GP SERIES were the electric 1:8 cars. It sounded a bit weird, but these cars are becoming the faster the more popular! It was clear to everyone that managing and solving problems in order to keep the more of tranquillity was very difficult, yet thanks to the team father and son GEsualdi, any kind of problem would have been solved.

The same thing can be said for the technical inspection where Luigi Tognon did a great job by controlling also the weights, fuel tanks...

From a mediatic point of view, the event has been very responsive, the photos and the interviews ad well have reached thousands of people through the world. Statistically this race was between drivers from more than 7 countries over Europe (see attached statistics).

Next round EFRA GP SERIES Round 2 in Montbonnot (France) where EFRA will organizer EFRA European Championship 1/8th IC in 2019 from 18 of May to 20th of May. 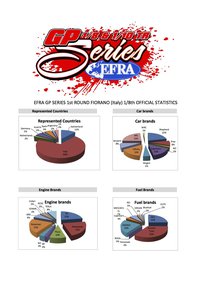 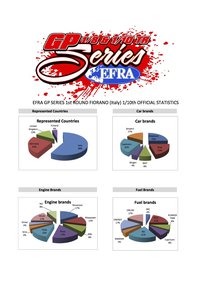