10/22/2013
By Mike Garrison
LiveRC.com
Welcome to LiveRC's weekly column, "Talk-It-Up Tuesday!" Here we spend a little time talking with industry icons including racers, manufacturers, team managers, developers, promoters, and everyone in between! Sit back, relax, and go behind the scenes as we interview them all!
Since the beginning of time, learning what, when, where, how setup changes to your car affect the overall handling has required hours, days, and months at the race track. That is until now! A new software on the market today called RC Crew Chief allows you to not only save and tweak your favorite car setups, but it also allows you to visually see the changes and their effects on the car!
This week, we have sat down with the brains behind this new software, Bob Wright, to go behind the scenes and "Talk-It-Up!" 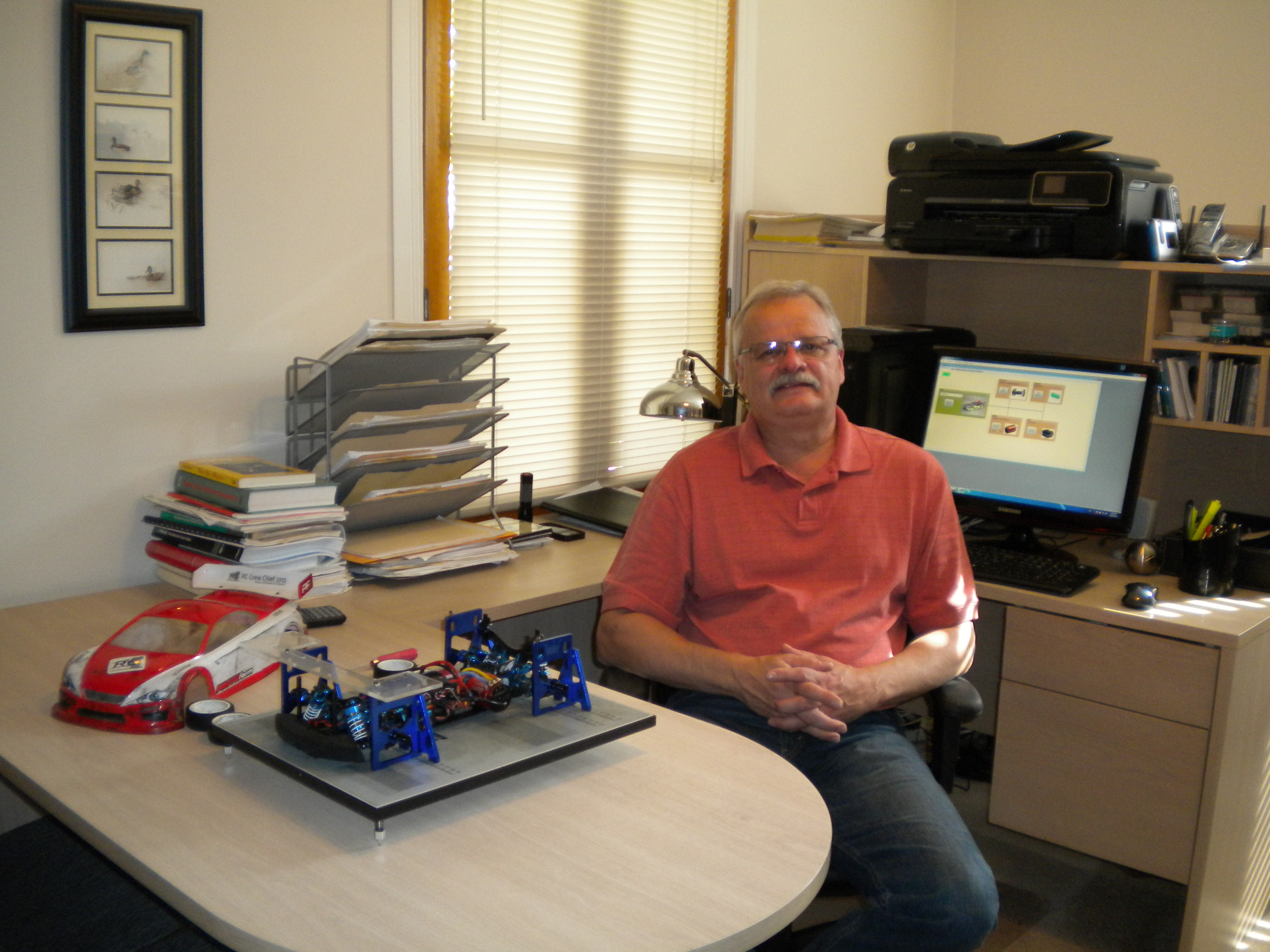 LiveRC: Welcome Bob to "Talk-It-Up Tuesday!" Let's start off by talking about who you are and your background in R/C racing. When and how did you get started in R/C car racing?

Bob: Thanks for inviting me. When my son was about 10 we had some time to kill and decided to stop into this cool looking Hobby Shop, Leading Edge Hobbies with a large F-18 model on the roof. My son spied a Kyosho Indy Car and being Indy Car fans, that was it, we were in. A few months after my son started racing I bought a used car and haven’t looked back, been racing regularly now for 17 years.

LiveRC: How often do you race today?

Bob: I race once a week at our indoor track from October to May. Usually try and get out to at least one regional race as well. The summer season at our club is dedicated to offroad which I don’t seem to have time to get involved with. I just have too many other commitments. Add to that I started to race full scale cars this summer in the Chumpcar World Series. What a blast that is. On a side note RC Crew Chief proved to be a valuable tool in setting up that race car too. That’s a 93 Miata in the picture, whoooohooo. 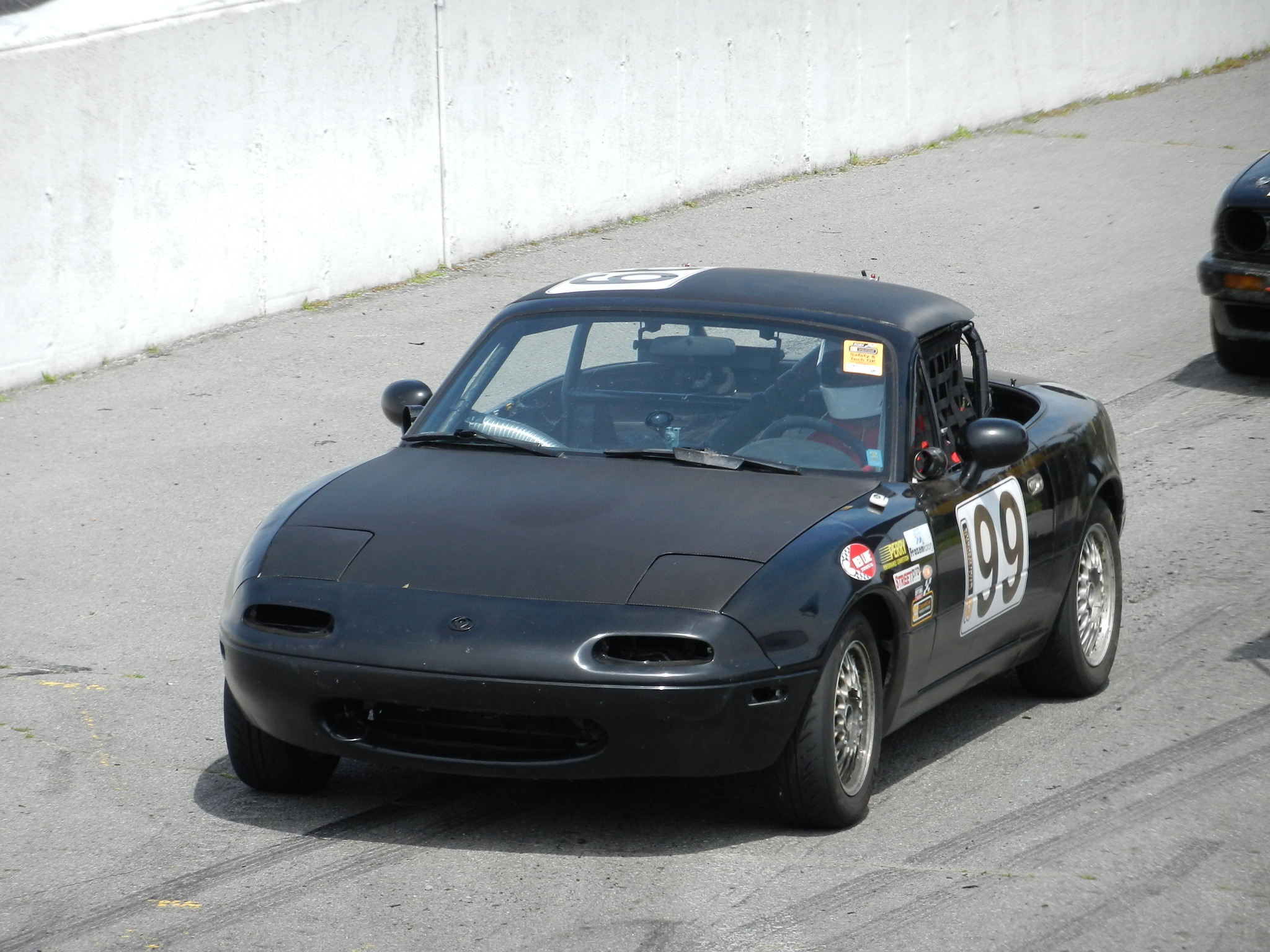 Bob: Not really, my trophy case is pretty empty. I’m just an average racer who loves the hobby and community. I guess you could say I am working on my major accomplishment right now through RC Crew Chief. My goal being to try and dispel the huge amount of mis-information out there by providing a tool that the average racer can use to learn and hone their skills in setting up cars. It takes time and dedication to realize the full potential of the program but just like anything else in life you get out of it what you put into it.

LiveRC: Off the racetrack you are an engineer, architect, designer, all-in-one correct? Tell us a little about that.

Bob: I have a degree in Mechanical Engineering and kind of ended up in the Architectural field for family reasons. I worked for a major Aerospace company in Toronto for the first 11 years of my career. Then my wife and I decided that we wanted a better environment to raise our family. We picked Kingston, I quit my job, we packed our bags, and I started Wright Engineering. There is a lot more to it than that as anyone who has started their own business will tell you but it’s gotten me to where I am today. The Architectural and Engineering work pays the bills and RC Crew Chief is my passion

LiveRC: At what point did you decide to take your engineering skills, and apply them to R/C by developing RC Crew Chief?

Bob: Back in my days at the Aerospace Company I used to write a lot of custom applications to simulate various aircraft systems we developed. I really enjoyed this aspect of the job but after completely switching fields the need just wasn’t there. Then along came RC racing and I was off again. I started out just creating Excel spreadsheets and then one long snowy winter about 6 years ago I decided to teach myself to use Visual Studio, a software development system that would allow me to create standalone software again. I needed a challenging project to get started and obviously it had to be RC related. Since car setup always intrigued me, I decided to work on something to simulate suspension. That led to the RC Roll Centre program, a free program I released about 5 years ago. It’s still out there floating around somewhere on the Mediafire download website.

RC Crew Chief is an evolution of that program that takes everything to a whole new level. 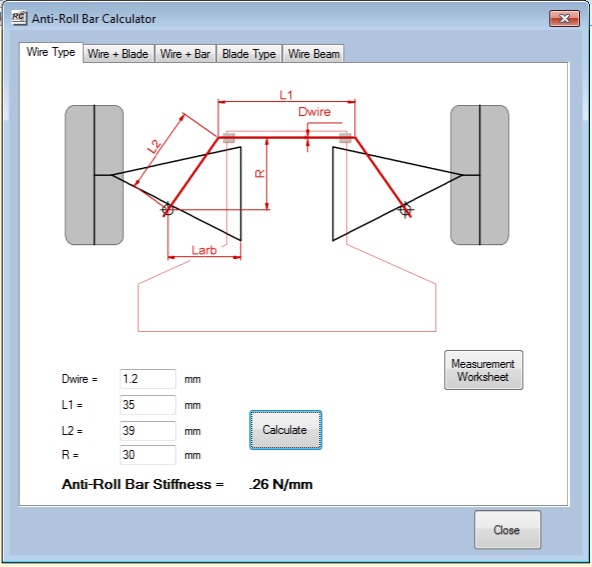 LiveRC: For the viewers who may not know exactly what RC Crew Chief is, can you explain it a little to them?

Bob: RC Crew Chief is virtual setup software based on well proven principals in vehicle dynamics. It allows setup changes to be made quickly and easily and the results are instantly displayed. With a few mouse clicks you can change suspension link positions to see the effect on Roll Centre location and camber gain, change shock angles, switch springs and anti-roll bars, change CG height plus lots more. You can also simulate straight line acceleration using Nitro and Electric motors and quickly change gearing, drag coefficients. RPM shift points to see which combination will get you there first. The best explanation is to watch the Youtube video “RC Crew Chief Overview” on the website.

I realize there is lots of setup information out there but I haven’t seen anything that uses interactive graphics. As they say a picture, or graphics in this case, is worth a thousand words.

It’s been roughly 20 months since the original program release and over that time I have received feedback from numerous users saying what valuable tool it has proved to be. It has also been a huge learning experience for myself as well. My setup knowledge has now reached a whole new level.

LiveRC: What is the benefit of using software such as RC Crew Chief, as opposed to traditional "trial and error" setups and testing?

Bob: The short answer is you can look at the effect and magnitude of multiple different changes quickly, make an informed decision on what to try, apply it to your vehicle and then hit the track to test it out. That way you know what to expect on track. It can take a long time to get where you want to be with the trial and error method. Plus when making random changes you really have no idea how much of a change you have made. Some changes will be very small and the effect may not even be noticeable to the average driver. Others can be large and have very negative effects on handling.

I guess all one has to do is take a look at the myriad of the setup changes we can make to these cars. Compared to full scale race cars we have way more options available. Knowing which one to change and when is key. Like all RC racers I have used the trial and error method and trust me I have made more than my fair share of errors. In a lot of cases not even really understanding what went wrong. No more for me I have a tool that eliminates the guess work. 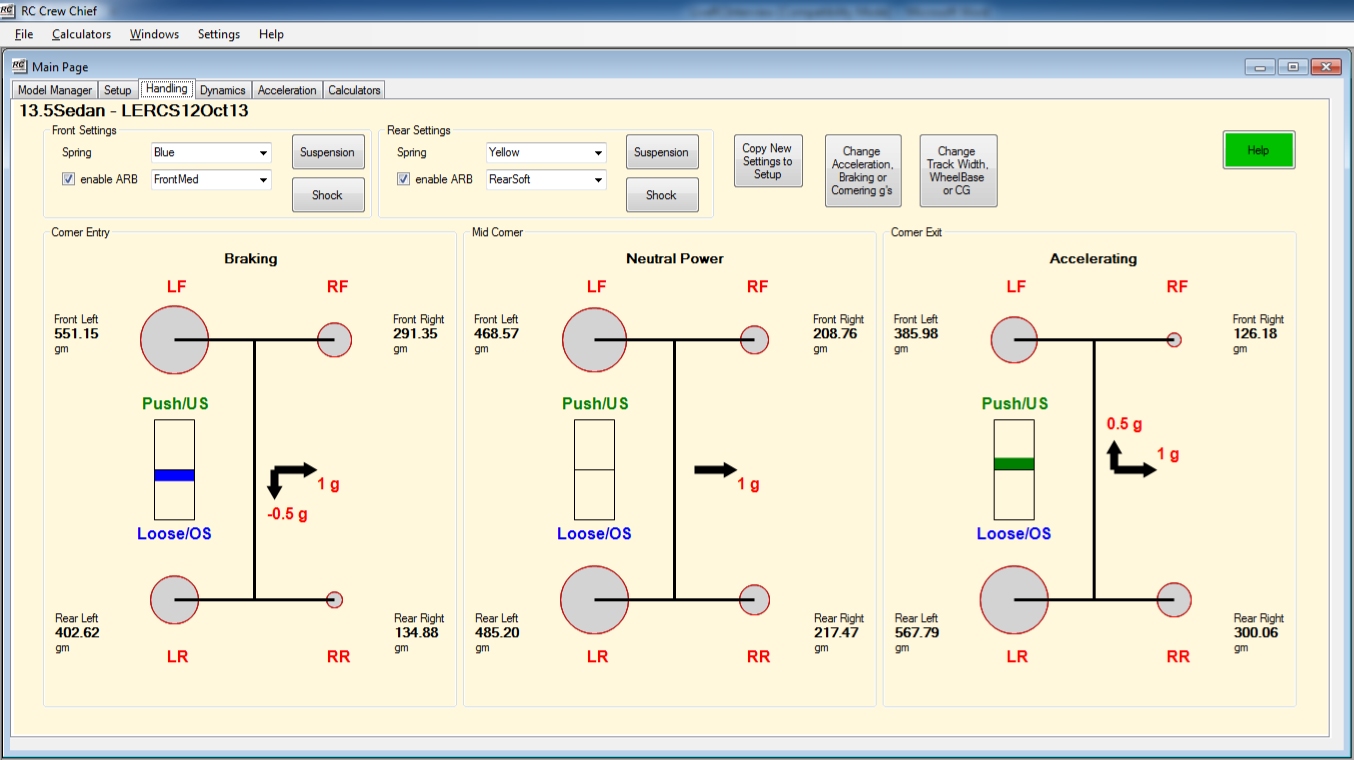 LiveRC: Are there any pro drivers that you know of using your software to assist them in setups?

Bob: Yes there are a few Factory drivers that I discovered have the program. I have tried to contact them and get some feedback from their perspective but so far I have struck out. Maybe it`s one tool in their bag of tricks they don`t want to reveal. I think it would be great to collaborate with a Pro Driver. That could prove to be beneficial for both parties.

There are also lots of user’s names I see popping up high in the finishing order at major events. I like to think that RC Crew Chief has helped them get there.

LiveRC: What is your favorite feature of the program?

Bob: That’s a tough question to answer. I guess I would have to say the ease with which you can change the setup using the interactive graphics. That was one of my main goals in creating the program to make the UI simple and as intuitive as possible. Using graphics to visually show the effects of changes is a lot easier than looking at a pile of numbers. 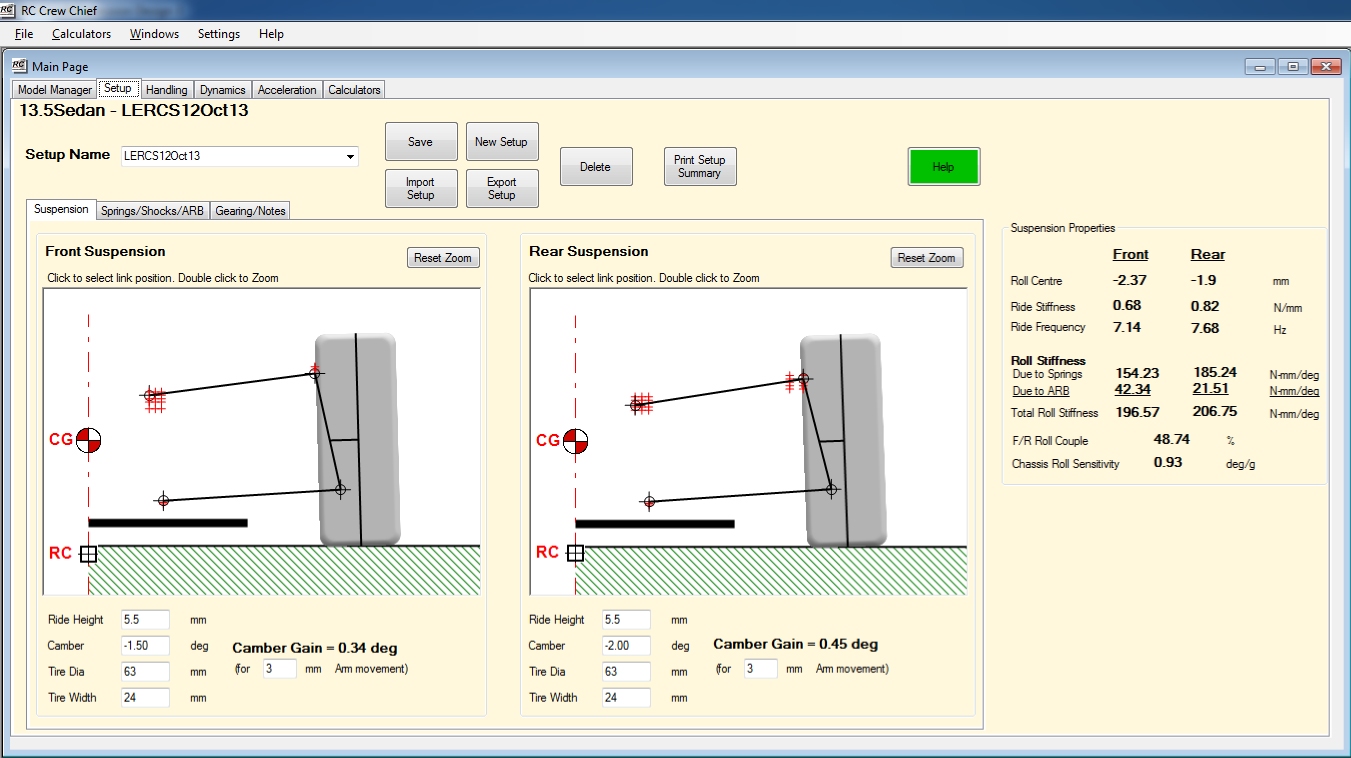 LiveRC: When you first purchase the program, it includes three onroad models, however you can download free setups from a list of both onroad and offroad vehicles on the RC Crew Chief site, correct?

Bob: Yes there is a free library of models for onroad and offroad cars, and gas/nitro/electric motors that can be downloaded from the website and imported into the program. The library continues to grow as I can get my hands on different cars or users contribute models they have created.

LiveRC: If the model car you are looking for is not listed, how can you go about getting that model download?

Bob: The easiest way is to create it yourself. That means doing some disassembly of the chassis so you can take accurate measurements. A set of digital calipers is the tool for this job. I have included measurement worksheets in the “Chassis Manager” that illustrate the dimensions required and provide a place to record the measurements. Support via email is provided for users who want to undertake this. It takes 3 to 4 hours to do properly. It would be great if I could get the measurements directly from the manufacturer but understandably they are not willing to release that information.

It’s also worth mentioning that even if the model for your specific car is not available you can still gain valuable insight into your car setup by using a model that is close to yours. In the end the differences in suspension geometry between manufacturers of similar cars is slight at best.

Bob: Expand the user base, build the online library and spread the word. Since the initial release there have been more than 30 updates to add new features and provide bug fixes. At this point I have pretty much reached the end of the development cycle for this version due to limitations in the database structure. There are a few new features I would like to add and will include over the coming months.

I have big dreams for where to take RC Crew Chief in the future. I would like to create a full 3D setup simulation, including chassis stiffness, true dynamics, and tire modeling. That will require significant changes to the program structure and will mean another huge investment of time to complete. That decision won’t be made for a while though.

LiveRC: Where is RC Crew Chief being used around the globe?

Bob: Right now I have users in 52 countries, USA, Canada, Australia, UK, France, Germany, Sweden, Spain to name a few. It’s been a real pleasant surprise how far and wide RC Crew Chief has spread. That is what is truly amazing about the internet.

LiveRC: Bob, thank you for joining us today! We look forward to seeing what's next for RC Crew Chief! Is there anything you would like to add?

Bob: It’s been a pleasure and thank you for providing me with this opportunity. I would just like to say to the readers that if you want to truly learn about car setup then give RC Crew Chief a chance. There is a two week free trial period so you have nothing to lose and everything to gain!
CLICK HERE to learn more about RC Crew Chief
JOIN US NEXT WEEK FOR ANOTHER EDITION OF "TALK-IT-UP TUESDAY!"