Talk It Up Tuesday: Aydin Horne 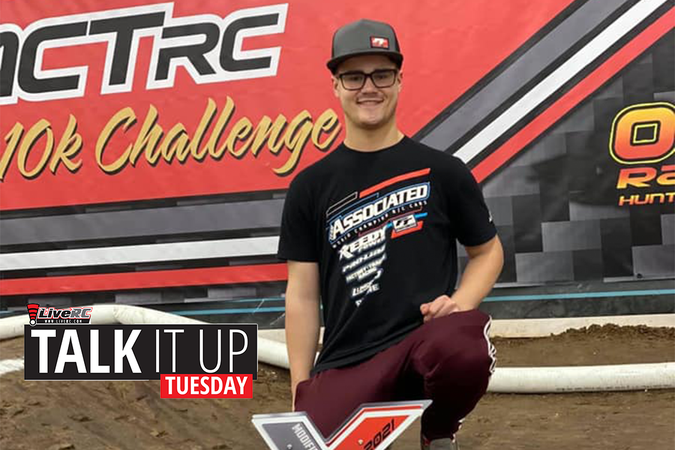 Most people have one breakout year or race once they hit a certain level, but Aydin Horne has done it twice in about a years time. He took a Reedy Race Open Win in 2020 upping his level and just one year later he took back to back wins at The April Fools Classic and The Xact Challenge! Learn a bit more on this week #FlashbackFriday.

LiveRC: 2021 Brought a change to your program moving from Factory Tracks to the Factory Team Associated squad, how has the transition been?
Aydin Horne: The transition has been smooth! It was a little weird at first not being dressed in the factory tracks blue, but my new teammates and I are getting along well.

LRC: I would say that in most cases when someone leaves a family team people would assume there was a falling out, but that isn’t the situation here is it?
AH: Definitely not. I’m sure it was tough for my dad to have me move on, but at the end of the day we both know it was for the better. I still have a good relationship with everyone on the Factory Tracks team. They are like a second family to me.

LRC: You’ve had good results and wins here and there but your breakout I would say was the Reedy Race win last year, how did that win change your career?
AH: The Reedy Race win is honestly what enabled me to compete at this level mentally. At that race I learned how to handle pressure and lead laps without imploding. I’d say it for sure opened the gate for more opportunities to run at the front.

LRC: The sweep at The April Classic was impressive, but to back it up by taking home all the cash this past weekend is pretty wild, how have the last two or three weeks treated you?
AH: The wins over the past few weeks have been nothing short of a dream come true. My whole life, all I’ve wanted and all I’ve worked for was to compete at this level. It still feels so surreal. I’ve always wanted to get wins like this but for a while I didn’t think I ever would. To have these two weeks happen the way they did is so special to me, and I’m cherishing every moment.

LRC: You’ve been at all the major 1/8th scale races this year also, have you enjoyed the change of pace?
AH: The 1:8 races have been a challenge. It’s definitely a different animal and I’m slowly making progress. Although it’s nice to race the nitro events, finishing between 15th-20th position every time has been frustrating. It’s defiantly not due to lack of effort. Much like 1:10, I know if I just trust the process and keep working at it I will get where I want to be eventually though.

LRC: What’s next on the 2021 schedule? What race are you looking forward to next?
AH: Silverstate will be my next event, and I’m looking forward to it! I don’t think I have any 1:10 races for a little while here, but when the next one comes I will be excited for that as well.

LRC: Is there anyone you would like to thank?
AH: I have to give a massive shoutout to my Mom, my brother Austin, the one and only Big Man Al, and Brent Thielke for all they have done for me. The list of people in my corner is staggering and I’m very grateful for everyone. I wouldn’t be where I am today without you guys!