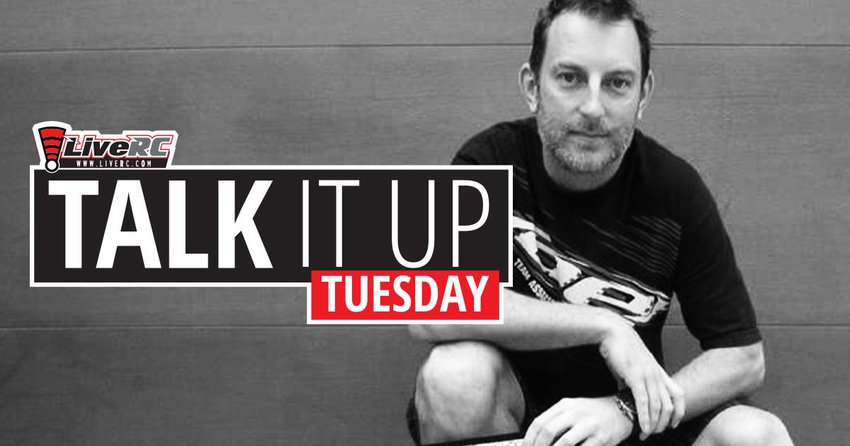 For this week's Talk It Up Tuesday we sit down with the founder of Avid RC, David Joor, to discuss bearings, sponsorships in the industry, the brand, and more. 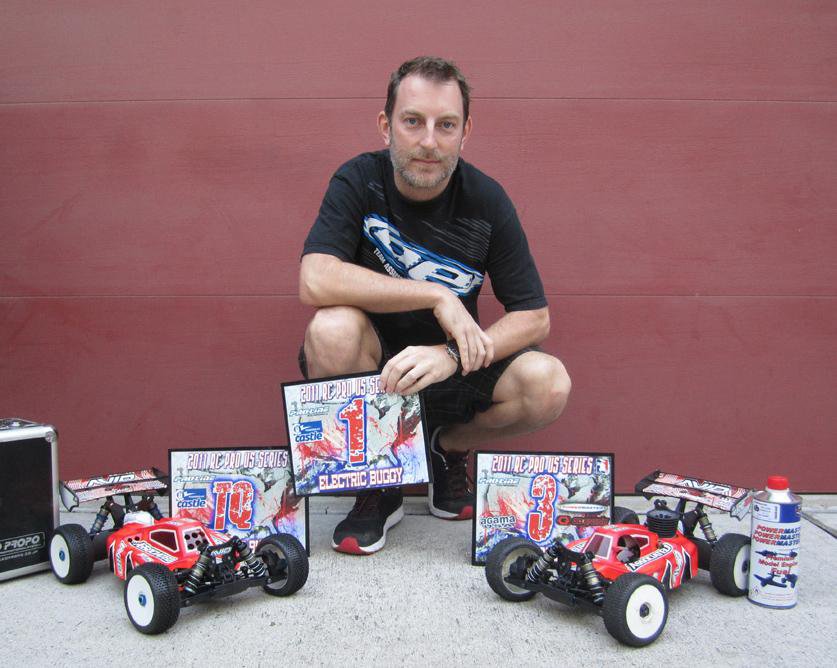 LiveRC: Welcome David to this week’s edition of Talk It Up Tuesday! Let’s start out by talking about your early days in R/C. When, where, how, and why did you get started in R/C racing?

David: About 35 years ago my mother got me this silver Porsche that was a drive by wire car from Radio Shack and I was hooked. At 10 my grandfather took notice and got me a Bolink Invader that I would destroy on curbs daily. But it was 4 years later that I got the RC10 gold tub and I remember driving it out of my front door and seeing the arms articulate for the first time that I realized this was going to be long fun journey. I soon discovered the local race scene with my best friends and it quickly became our weekly endeavor. I was very lucky to have caught the attention of a veteran racer, whom was a ROAR regional champion (which I thought that was the coolest thing in the world), take me under his wing and teach me the ins and outs of racing.

LiveRC: What are some of your proudest accomplishments as a racer from over the years?

David: I was a home track hero in Houston for my first decade of racing. At the time, the Texas area had the largest level of RC talent in the USA besides that in California. So I had been competing at a high level locally but had no idea how I measured up to the pros. It just happened that the 1998 ROAR On-Road Nationals were coming to Performance Raceway, my home track! I didn’t end up winning a national championship but I qualified 2nd behind Joel Johnson in mod touring and TQ in stock pan car. I went from not being sponsored to having a full ride from Losi, Trinity, and Novak that weekend. 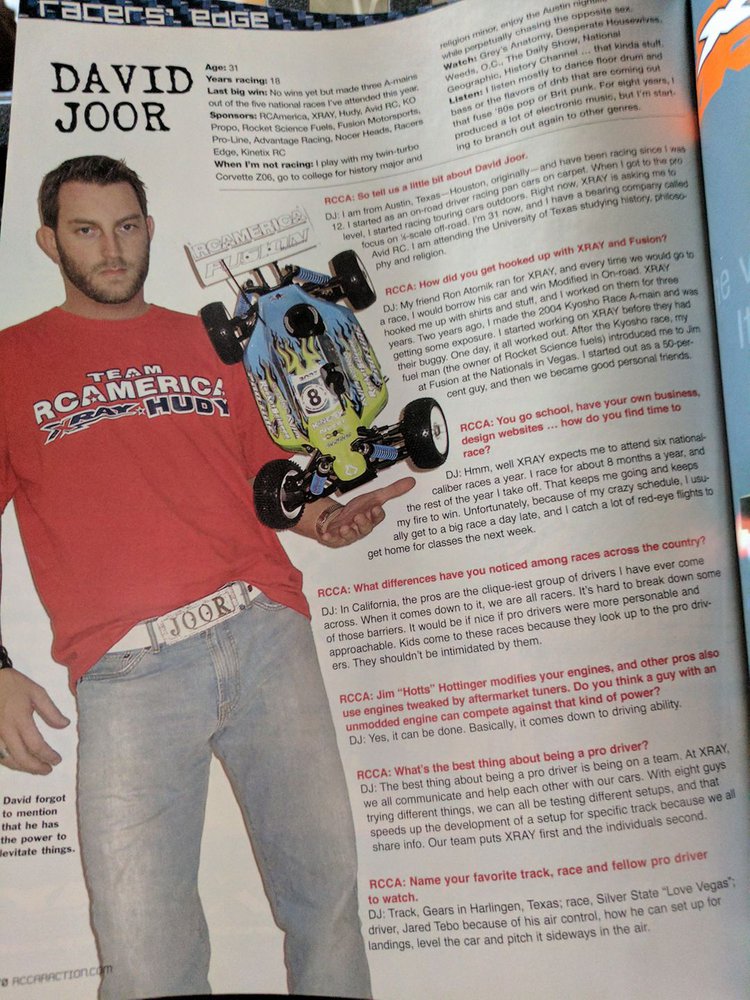 LiveRC: When, where, how, and why was Avid RC born?

David: In 2003 bearings were being sold by just a couple of companies for $5-7/ea. These weren’t ceramics or anything special. The bearings typically wouldn’t finish a nitro main event in the clutch. The problem was that these companies were using the experience gained from the skateboard industry decades before it which didn’t translate to RC bearings. At the time I had brought several companies to market with my web development skills such as Jconcepts, RCAmerica, Kinetix, and CEFX. I knew I had the knowledge of how to do it and didn’t need to hire anyone to start a company, so it was just a matter of finding the niche. Bearings were the vehicle that finally landed on my lap to put my skills to the test. 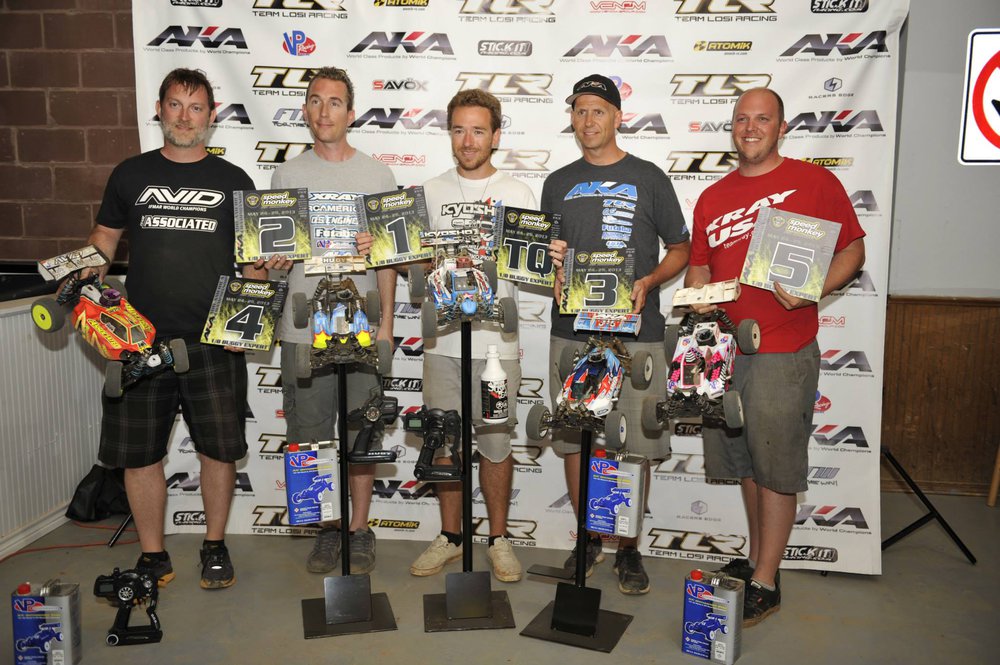 LiveRC: Did you ever imagine when it first started that your company would become known worldwide and used by many of the best racers in the world?

David: Not in a million years. I borrowed $700 from my mother to start the company and got to testing bearing vendors and specifications. I honestly just wanted to sell enough to cover my RC travels but within a month I was able to pay my mother back, order twice the inventory I started with, and continued to grow the company slowly and surely over the years from that initial $700 injection. 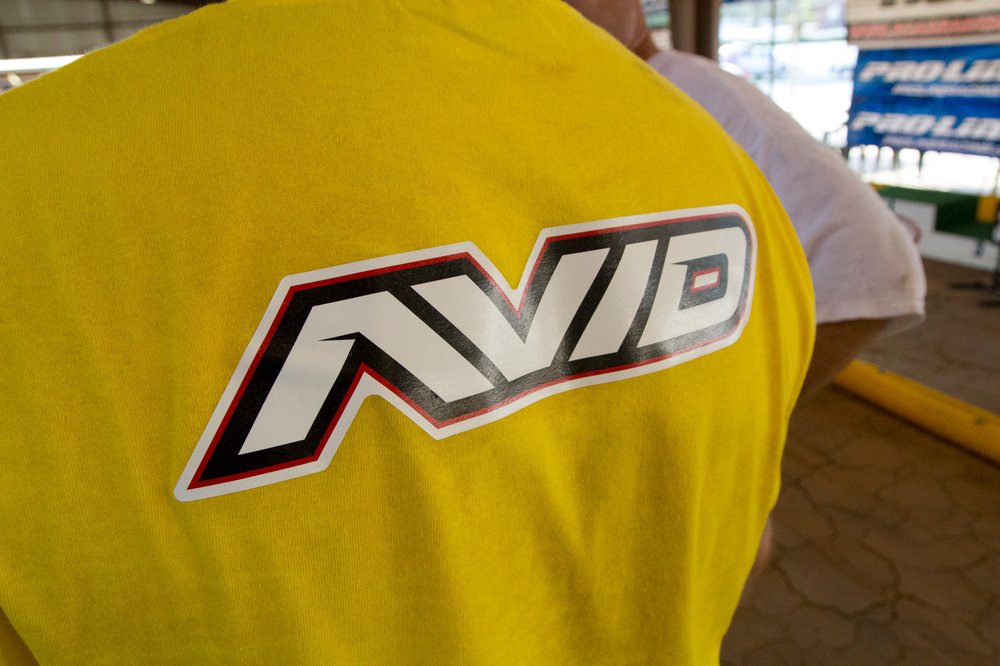 LiveRC: Avid started with bearings, and now offers a lineup of accessories and option parts as well. When and why did you decide to begin offering more than just bearings?

David: I had wanted to make accessories for a while and in 2012 Kurt Wenger approached me about seeing if accessories would actually take off. At that time, no one was making accessories for 1/10-scale offroad vehicles. Needless to say, we partnered up and it flourished. That period of time was so much fun for me.

LiveRC: Do you design majority of the Avid RC options available today?

David: I am the sole designer for Avid.

LiveRC: The industry has changed a lot over the past 10 years. Tell us how the changes in the industry have affected Avid for better or worse, and why?

David: The largest change in the industry would be how the majority of companies now handle their sponsored drivers as VIC’s (Very Important Customers) and less as representatives of their brand. The fact that so many companies will sponsor anyone with a credit card may have a negative impact on the industry as a whole. Luckily this hasn’t affected Avid because I have stuck to my guns about maintaining the old school mentality around sponsorships. That is, you must earn your support through top race results in your region and have a positive and helpful attitude at the track. In other words it is very difficult to get on our team and we pride ourselves on this. But as someone passionate about this industry, I am fairly concerned about the fallout that may take place when this sponsorship model eventually can’t sustain itself. I can’t predict exactly what will happen, but it is already in the public domain about how sponsorships are losing their prestige. Unfortunately, there are a lot of companies that survive solely on offering these discounts to racers and if this model fails; those companies may as well. 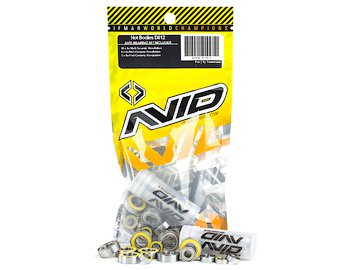 LiveRC: Bearings are not all the same, and you offer several different lines of bearings (including the new Aura Steel Revolution line). Explain to us the difference in the bearings you offer and which bearing line you recommend for different applications.

David: I could write pages and pages on this so I will try to keep it simple.

Now that we offer both lubrication options in our bearing lines, greased and oiled, here is the best way to choose which one is best for your application. If you have bearings failing quickly in a certain location, you need a greased bearing there or you need to step up your seal protection. So to make it basic, going from highest level of protection goes rubber, Revolution, metal, and lastly Revolution with the rubber seal removed and left off. If you were running a greased Revolution and it is failing, then go to the rubber seal on both sides. The reason why is because the seal is tight on both sides which helps keep the grease in the bearing. Although debris can’t get to the metal shield on a Revolution (except on center diffs where the bearings aren’t captured), the grease can slowly seep out more easily past the metal shield. But the inverse of this logic is if the bearing is still smooth after 5 races, you may want to move from a Revolution to a metal shield or try the new Revolution Aura line that is oiled. Just remember that an oiled bearing requires more maintenance because the oil does not stay in the bearing as long as grease does. Grab a bottle of our Slip bearing oil for this.

Let’s move to ceramic balls vs steel. Anyone that has contacted us about this will attest that I give a very surprising answer here. I personally think ceramic bearings for the majority of racers are a complete waste of money. An argument can be made that this isn’t the case in stock and I can get behind that. But for the majority of racers, you won’t be able to feel the difference on the track and a ceramic ball will not decrease your lap times or increase the longevity of the bearing. Now if you are maintaining your bearings by cleaning them after a weekend of racing, you will get a bit more longevity out of a ceramic ball bearing. Is it worth the cost though? I say buy the steel ball bearings with some spares and use the money saved on tires. That being said, I will always recommend ceramic in engines, gearboxes, and if you are competing in stock on a national level.

LiveRC: What is the most popular bearing that Avid RC sells?

David: In 2003 when I innovated the Revolution seal (rubber on one side and metal on the other), that has been our top seller since. It is the most versatile because you can always remove the rubber seal and face the metal shield to the outside world for maximum performance in those low dust environments. 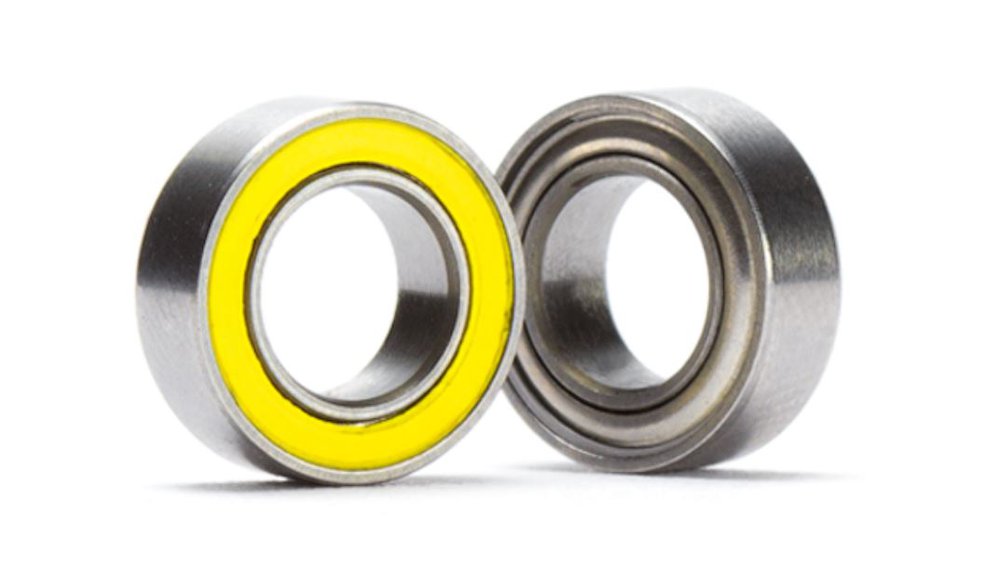 LiveRC: Clearly you have knowledge of bearings. There are a lot of different methods to cleaning, maintaining, and re-oiling bearings out there. What is your preferred method and a few tips and tricks you can share for proper bearing maintenance and care?

David: This being such a subjective question because unfortunately there isn’t one way of cleaning that is far superior to another. The one thing that is for certain is to never use brake cleaner. The chemicals in that are caustic and will eat away the metal, causing the surface to pit and become permanently rough no matter how clean the bearing it.

LiveRC: What Avid RC product are you most proud of, and why?

David: Hands down the Truss 1/8-scale wheel. The general design of 1/8-scale wheels had not changed much since their inception except for the bead mounting portion. Trying to improve on a proven design was not an easy task. So I am very proud of the result I designed with the Truss ribbing, foam grippers, and glue bead protection.

But a close second isn’t a product but the FlexKit software that I programmed in 2012. It is very unique in that it allows the racer to customize their bearing kit by choosing which style of bearing they want for each size. The bearing kit is then packed to the racers selections and the label reflects those choices along with the racers name, full custom son! 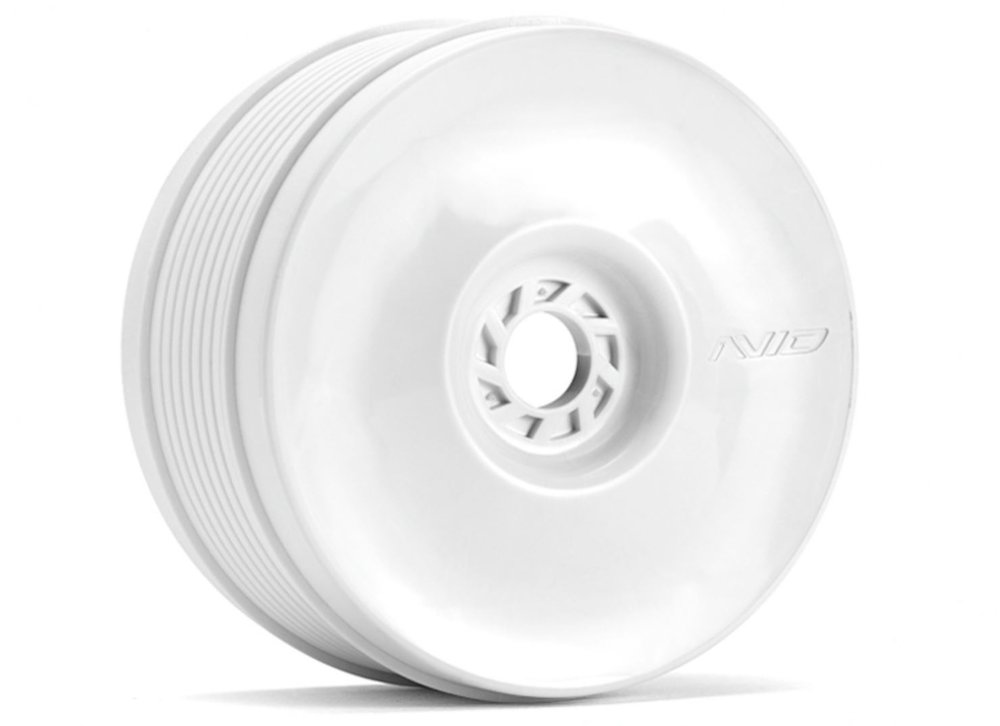 LiveRC: How often are you able to step away from the office and do some racing of your own these days?

David: Wearing so many hats here at Avid, it is tough for me to get out as often as I would like to race. Last year I had a fun local 1/8-scale off-road season here in Colorado and Wyoming. It is so awesome to be outside racing next to a mountain range! 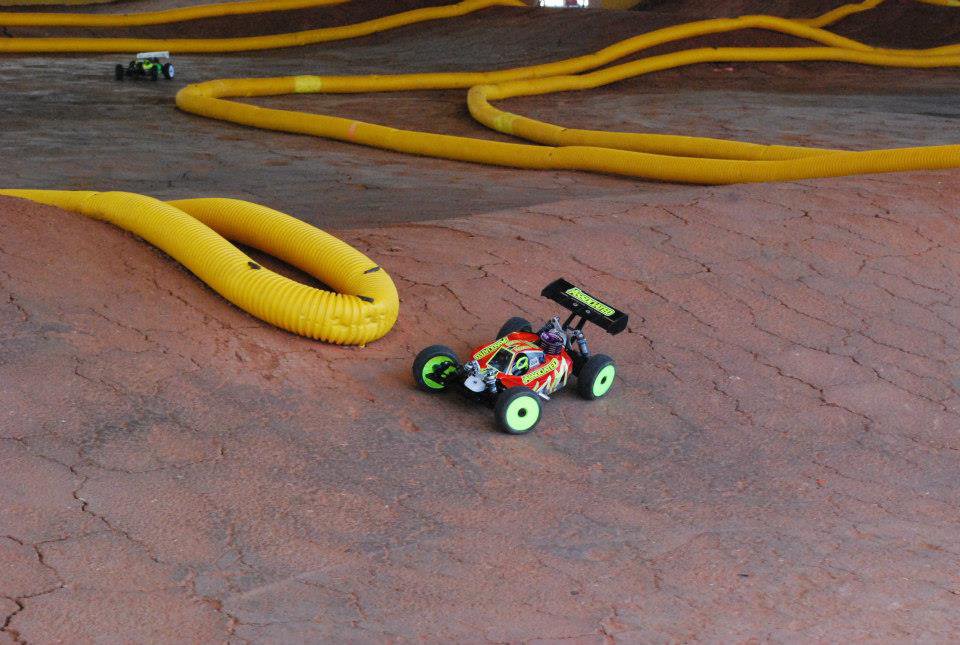 LiveRC: Will we see you at any major events coming up soon?

David: I will be at the MHIC this year since we have title sponsored this event for several years now. I have been focusing a bit more on my personal life after moving the company and myself to Denver from Houston. I hope to jump back into 1/10-scale off-road here soon.

LiveRC: What is one thing most people don’t know about David Joor?

David: I am adopted and used to be an electronic music producer.

LiveRC: Thank you so much for joining us today David! It’s been great catching up with you, and we hope to do it again soon. Is there anything you would like to add before we go?

David: Thank you for this opportunity.