TALK IT UP TUESDAY: Daniel Kobbevik 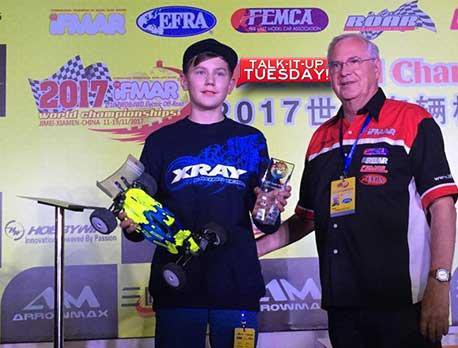 Welcome to LiveRC's weekly column, "Talk-It-Up Tuesday!" Here we spend a little time talking with industry icons including racers, manufacturers, team managers, developers, promoters, and everyone in between! Sit back, relax, and go behind the scenes as we interview them all!
At just 13 years old, Norwegian off-road star Daniel Kobbevik has made a name for himself as one of the fastest up-and-coming racers on the planet; in fact, just one month ago he was awarded the title of Junior champion in both 2WD and 4WD for being the fastest driver at the IFMAR Worlds in China under 16 years of age. I reached out to Kobbevik on Facebook to learn more about his lofty goals, hobbies away from the racetrack, how he got started in RC and more for this week’s Talk It Up Tuesday. 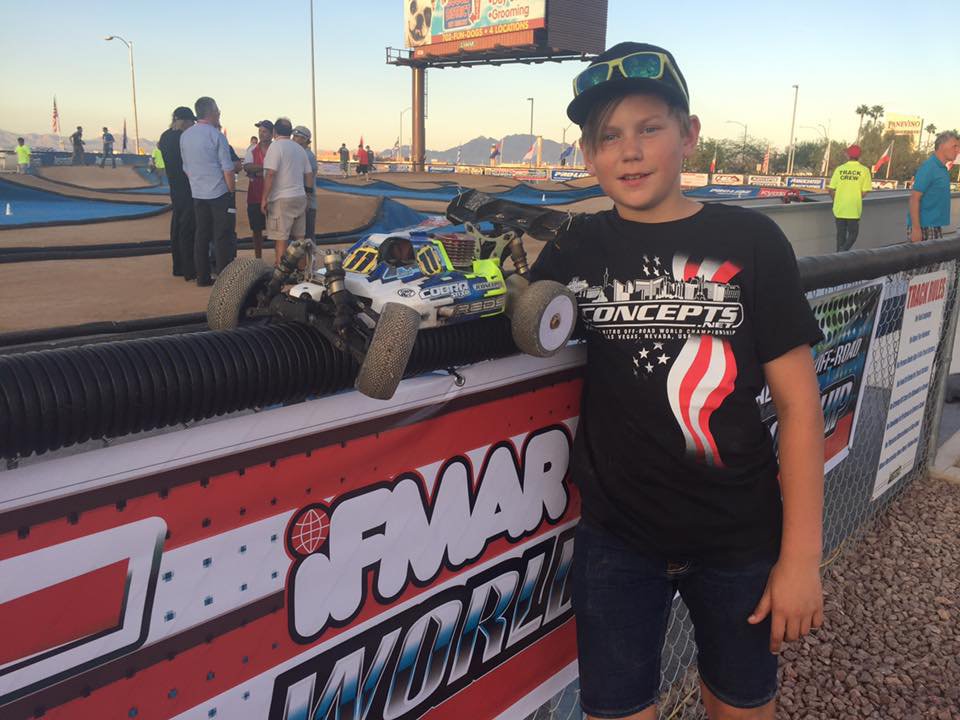 Aaron Waldron: How old are you, and where are you from?
Daniel Kobbevik: I just turned 13, and I am from Moss in Norway — a city close to the capital, Oslo.
AW: How did you get into RC, and how long have you been racing?
DK: I got into RC in a coincidence; my father was playing in the World Series in beach volleyball, and he bought some cars just to focus on something different. He bought the same stuff for me, even I was just 4 years old. It was mostly RTR cars, and we understood very quickly that it was not good enough for the race track, so he bought racing cars to us both and we both raced together. I think I did my first race when I was 5 years old. I remember I finished 29th in the first race, and the day after I advanced to 9th in the same race. I have been super lucky that in Norway there were some touring guys (Trygve Berntsen, Lars Tommy Bentsen, Helge Johansen, Bjorn Dahl and Rolf Dahl) that helped me out with 1/12-scale and touring — I remember that as really fun times! I think those times are one of the key things that learned me about lines and speed. It’s amazing that they took me seriously and we had fun together! I’ve been racing for eight years. 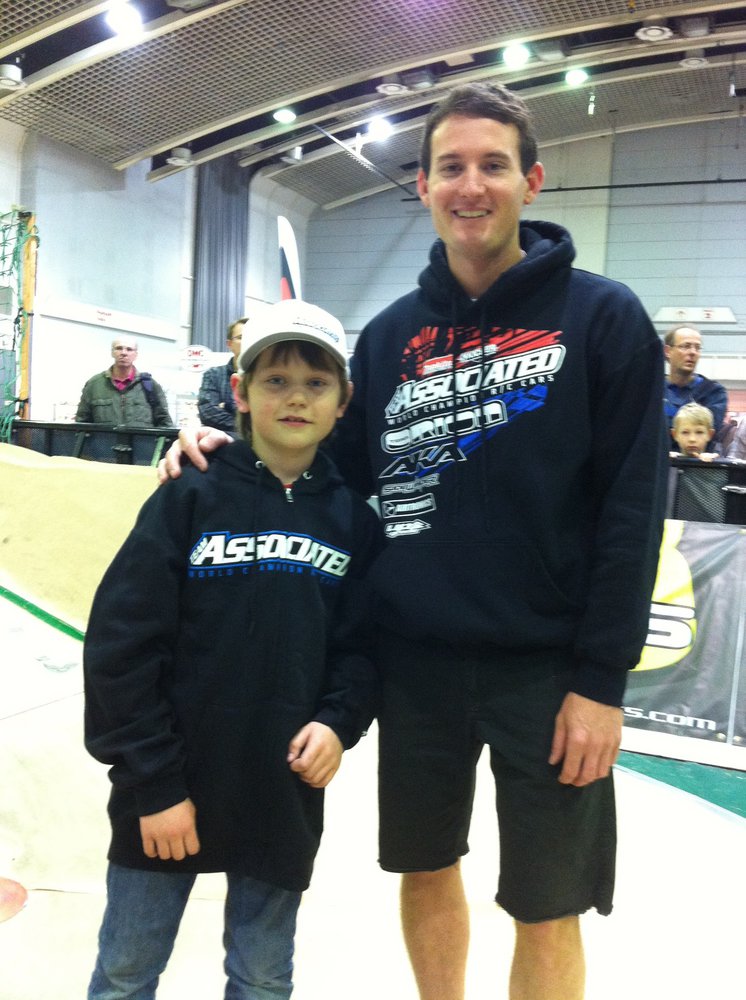 AW: What school do you go to, and what grade are you in? How do you balance traveling for RC races with completing your studies?
DK: I am now in eighth grade, and it’s not possible to attend to all the races I really want to race. There is also not much time for practice, so the priority is to attend the big races. My father has always said that racing is best practice you can get! The school is super flexible, so as long as I deliver my homework and my grades are good, it’s possible to get away.
AW: What made you decide to start attending big races and trying to attract sponsors?
DK: I really love to compete, and it’s of course best to compete in the races with the most of the best drivers in the world. Major international events are so much more serious, and more challenging, and there is no room for mistakes if you want to do well. It has been challenging sometimes working with sponsors, but as with almost everything there are positive and negative sides; it’s more about finding what’s good for you, and you learn after a while that it’s not the equipment that makes all the difference, but how well prepared you are yourself. 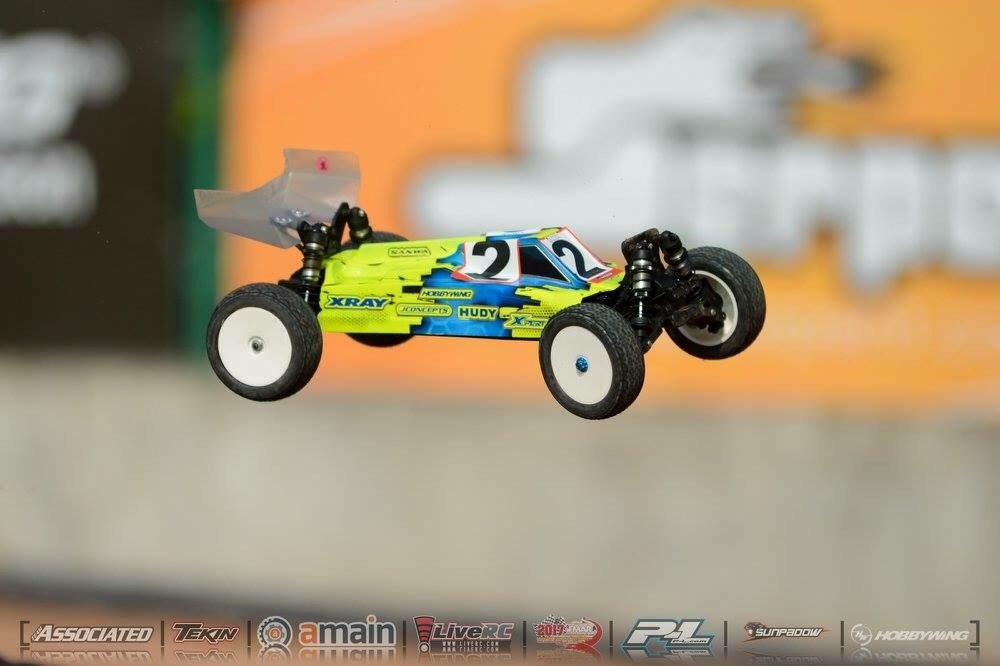 AW: What's your favorite track? Favorite big event? What different classes have you raced- and which is your favorite?
DK: My favorite track is OCRC in California; it’s like home for me. Just to see the building, and the track inside, is amazing! The Reedy Race Invitational is my favorite race. I have raced 1/12-scale on-road, 1/10-scale touring cars, 1/8-scale electric and nitro buggies, 1/10-scale 2WD buggies, 1/10-scale 4WD buggies, 1/10-scale trucks, and 1/10-scale short course. It’s difficult to pick out a favourite class, since all classes have so many cool aspects, but if I have to choose right now it must be 1/8-scale nitro. There are so many things to take care off, and so many things can go wrong, and it takes more teamwork than in the other classes.
AW: How does the racing scene in your area vary from other places you've visited?
DK: Racing is racing, but there are not as many drivers in every class; so like in 1/10-scale buggy, there are not that many drivers, so I have raced more 1/8-scale at home with many drivers racing at a higher level so it’s more fun and more challenging. It’s not like racing at OCRC, with cool club races and challenging tracks! 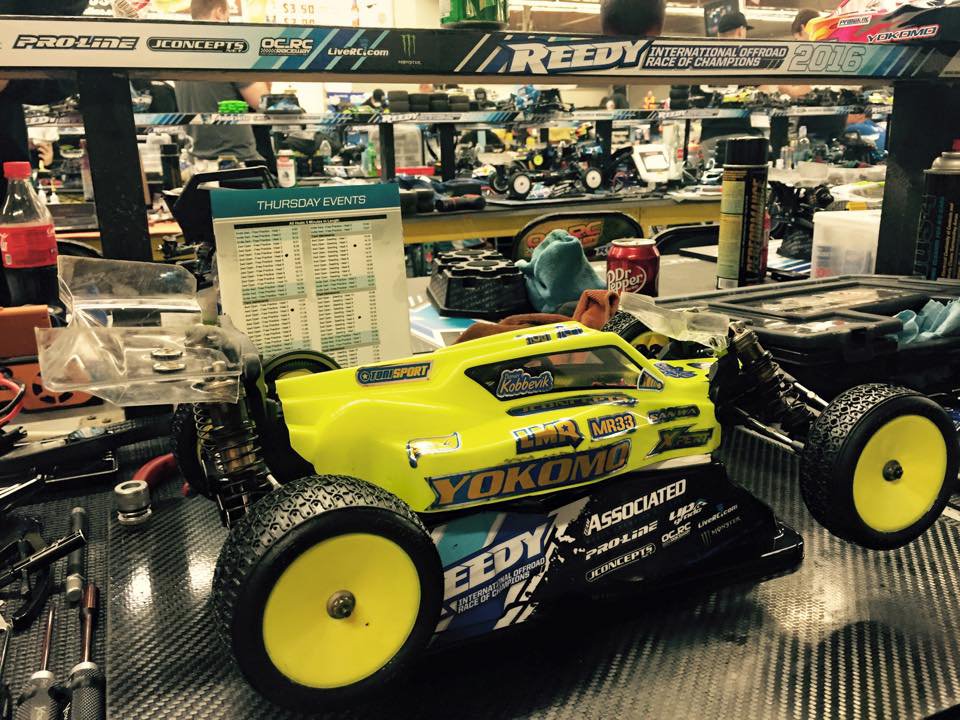 AW: What are your proudest RC moments?
DK: I think it must be when I was 8 years old, and Craig Drescher came to me at the European Championship in 2013 after being the youngest to get into a Euros A-main, and he said that I was going to the Reedy Race in USA. That was so cool! I had watched all the videos and that was a race I had dreamed about attending someday. The opportunity to go to California, visit Team Associated headquarters and feel the racing spirit around at different tracks — it was amazing for a young boy. :)
AW: Do you have any goals for your RC career?
DK: Yes, of course; I want to be a European Champion, World Champion, EOS champion and Reedy Race Champion. Those are my goals, but the road to those titles are a lot of work and maybe it will never happen, but I will try to get there. I really enjoy RC racing and all that comes with it, so to get a job or being a real professional someday — that had been awesome! 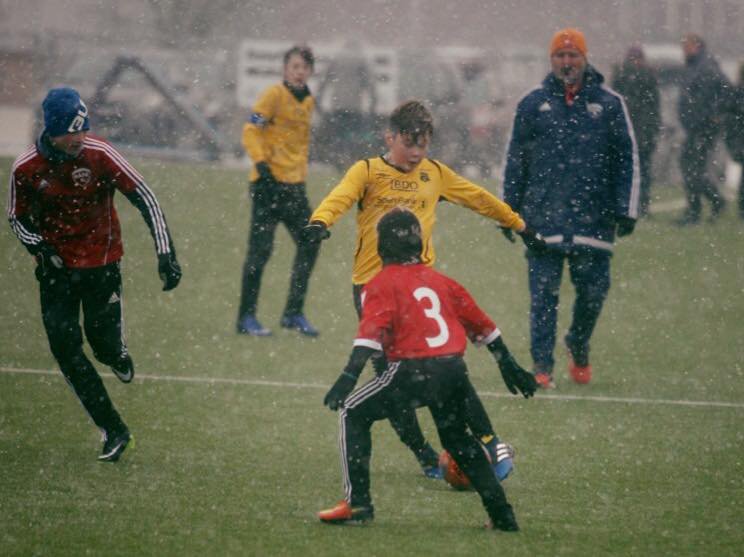 AW: When you're not at the racetrack, what are some of your hobbies?
DK: Football! It’s also challenging and you need to be focused, take care off your body, improve your skills, and work as a team. It’s the same feeling as in RC. Other than that, I like to be with friends and play FIFA on Playstation.
AW: What's the best part of RC racing? What about RC racing annoys or bothers you?
DK: It’s difficult to point out just one thing that’s the best part of RC racing. I think it’s the combination of everything, and sometimes it’s annoying, but mostly it’s fun, and to compete at a high level is so cool! It’s important to remember all the guys that have taken you forward, it’s a hard game, and so many sacrifice so much to be in the top. So for me, it’s an honor to know all this guys (to many to name), but there is a total of all the brands I have been raced for and right now I am at XRAY; hopefully we will have many great years and races in the future together. 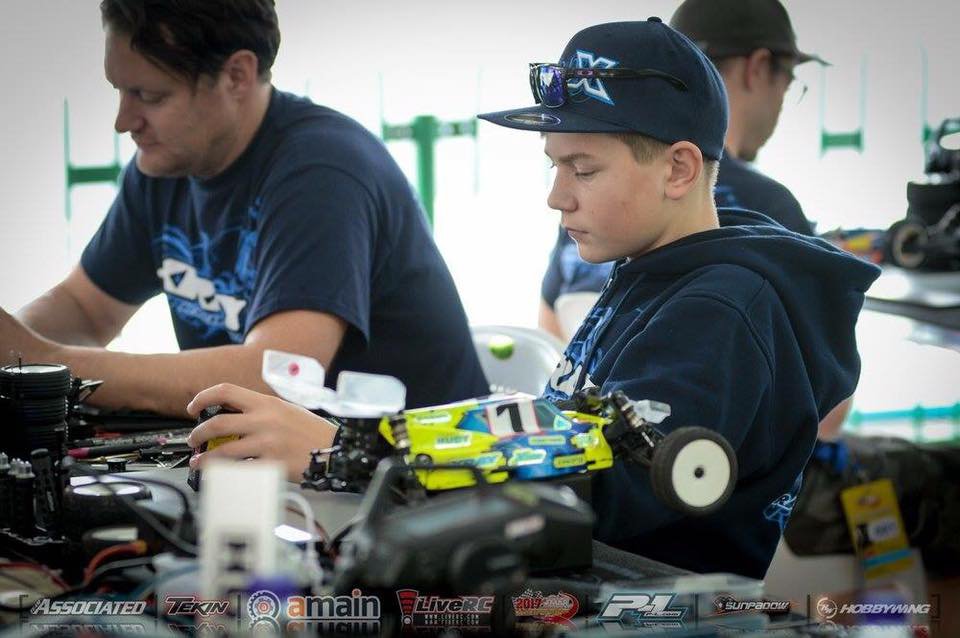 AW: Who are some of the people that have helped you the most?
DK: Again, there is a lot — I have been so lucky to have a father that took me in to this, and he has let me take my own way. He wanted me to be unique, not a copy, and to find my own style. He has supported me no matter what. It’s the way from all the races in Norway, I was accepted as a young driver, and there have been so many drivers around that have been making this trip so far very interesting and make me want to give back and see how far we can get.
AW: Thanks for the interview! Is there anything else you'd like to add?
DK: Just a pleasure, you guys that make all these interviews, stories, and reports are also a huge part off this industry, and make all so much cooler, and its possible to reach out to many many people! I almost forgot to thank my Supermom, that always make dinner ready before practice, do all she can to make my day good! :)

I will also use this chance to thank Xpert servos for believing in me, and they will still support me in 2018 — same with Brian Causse at Stickit1, who always delivers nice stickers and stuff for to me. JConcepts at the Euros, Worlds, Neo Race and others; it’s an honor to be one off the guys on this team! And I just have to say that, thanks to Mario Hudy that wanted me on the XRAY Team, and the very warm welcome I have had, just starting up in a super hurry before the European Championship warm up; they rushed around, got me cars, spares, all I needed, and it has been a real pleasure to see how much they have sacrificed to get me going! I must say that, this is what a real team spirit is about: working together, making sure all drivers have the same opportunities, and testing for each other. Thanks Martin Bayer and Juraj; to go to a race with you guys is a good feeling, you just want to do your best and it’s not about you, but for the team :) Now also big thanks for the chance to run some on-road as well :) It’s difficult to say all the names at XRAY/Hudy, it’s a lot off people at the office and factory that give 100%, so we can do our best at track! The future looks exiting! 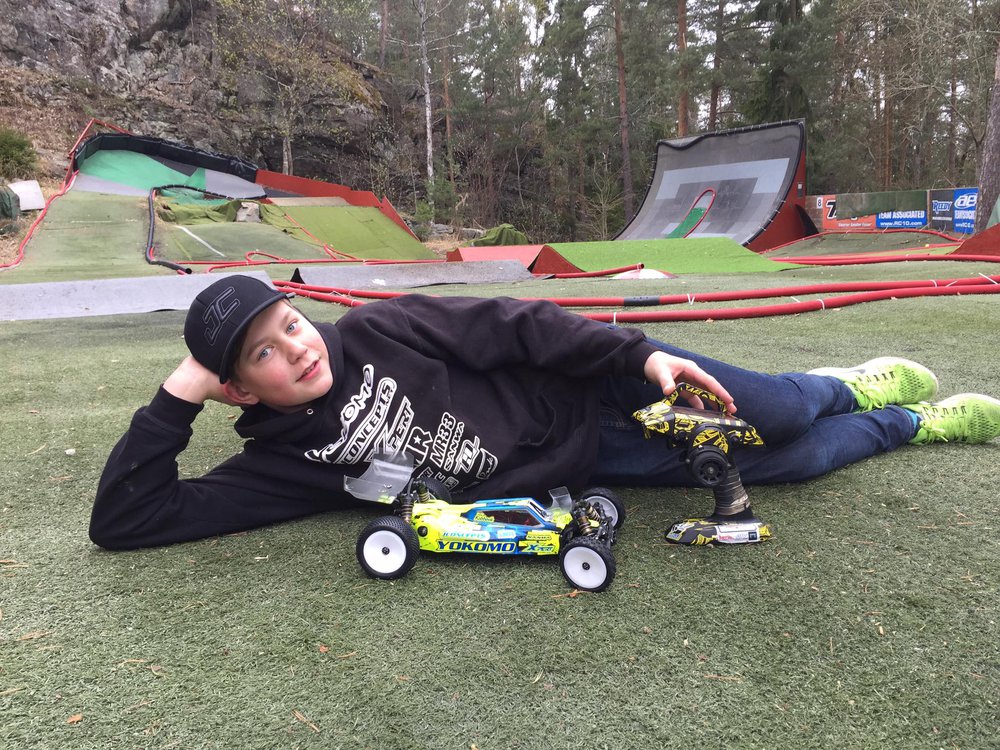