TALK IT UP TUESDAY: Max Mort 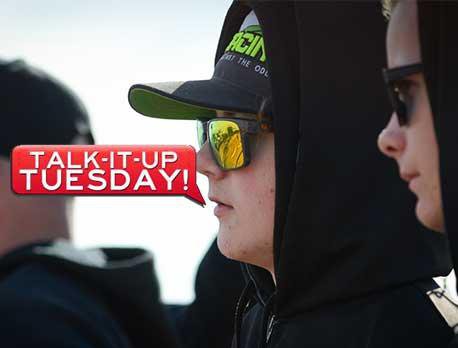 Welcome to LiveRC's weekly column, "Talk-It-Up Tuesday!" Here we spend a little time talking with industry icons including racers, manufacturers, team managers, developers, promoters, and everyone in between! Sit back, relax, and go behind the scenes as we interview them all!
Under the tutelage of JQ Racing founder Joseph Quagraine, Finnish off-road racer Max Mört has ranked among the fastest young drivers in Europe for the last few years, even winning the European Juniors title in 2015. In just his second race on U.S. soil, Mört made a stateside splash at the Dirt Nitro Challenge last month by outrunning several of his American colleagues for the Expert Buggy victory - and then delivering a terrific post-race interview that showed poise far beyond his age and experience. I reached out to Max on Facebook to learn more about his life and RC career for this week’s Talk It Up Tuesday. 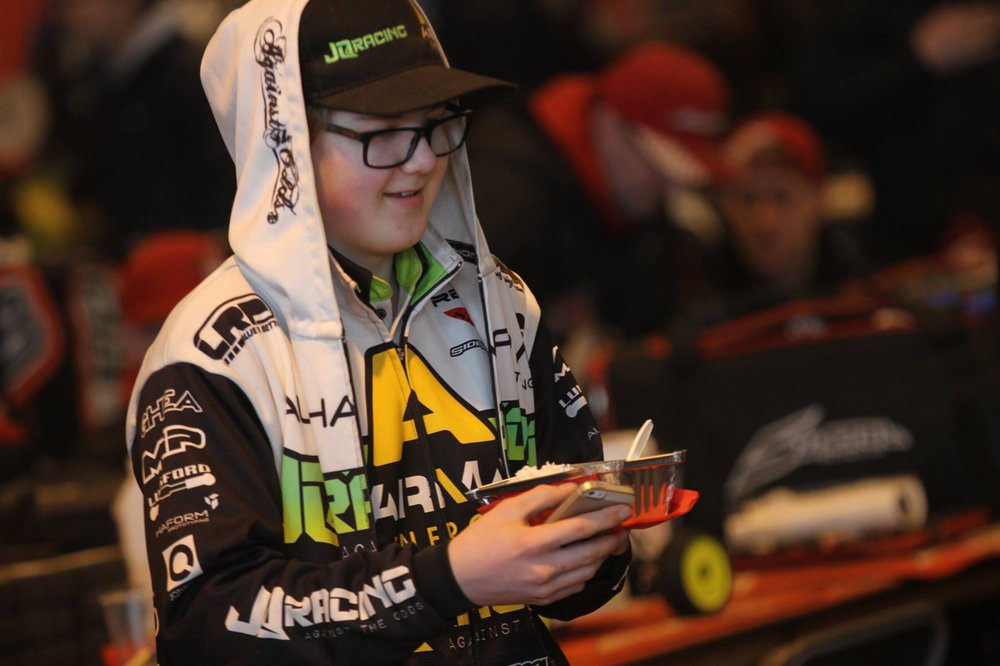 Photo: David Peter Watts, via Facebook
Aaron Waldron: How old are you, and where are you from?
Max Mört: I’m 17 years old and I’m from Finland.
AW: How did you get into RC, and how long have you been racing?
MM: My dad bought me a car when I was about three years old; it was an Associated B3 and an old race car of our neighbour’s that actually was really good at the time — if I remember correctly, he might have made the Worlds A-Main final. I used to drive around a field that was near our home but never on any track, as at the time I raced ATV’s and dirt bikes. Then, later on, one of my dad’s friends had told him about an indoor track that had just opened somewhat near where we lived. That was in the fall of 2008, and since then I have been actually racing on a proper race track. So it has almost been 10 years since I properly started. 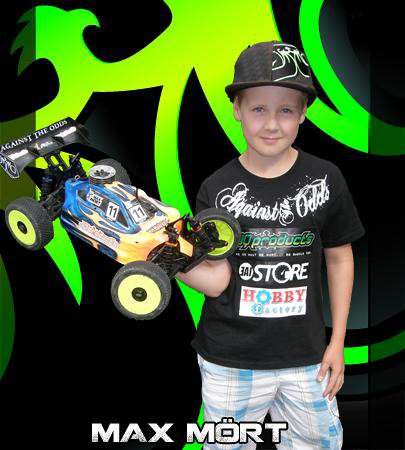 Photo: JQ Racing
AW: What school do you go to, and what grade are you in? How do you balance traveling for RC races with completing your studies?
MM: I go to the Finnish equivalent of high school and I am on the second grade. Most of the races are during the summer when we have holidays but when I still have school I try to make my school timetable so that the easiest stuff is when I have to race or practice before larger events.
AW: What made you decide to start attending big races and trying to attract sponsors?
MM: All of the Finnish 1/8-scale racers always told me and my dad that racing abroad teaches you the most, so my dad has always thought racing abroad in bigger races was good and I started racing Euros really early on. I attended my first Euro B event in 2011 and since then I have been racing more and more abroad. It was never really about attracting sponsors, but rather about the experience you get. 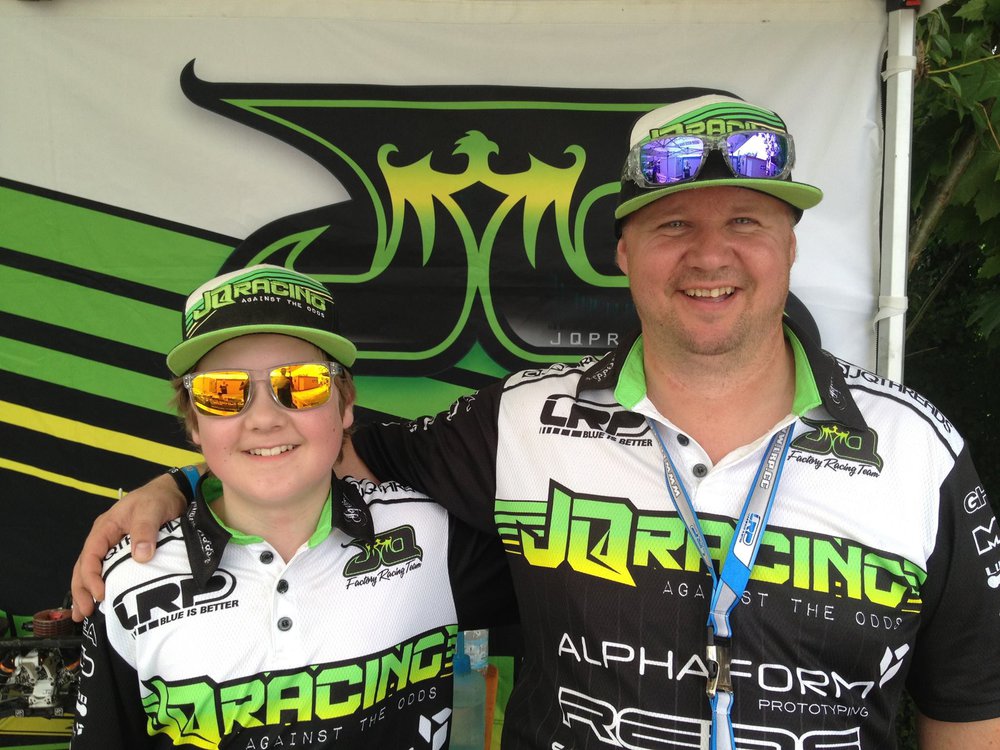 Photo: JQ Racing
AW: What’s your favorite track? Favorite big event? What different classes have you raced - and which is your favorite?
MM: As a single favourite track it’s a tough call, but it’s either the track in Barco or the track in Madrid in 2014 that hosted the Euro B. My favourite big event has to be the Bittydesign EURO contest in Italy; it has such a cool atmosphere and a good schedule and every year there seems to be more and more top-level racers. I have raced 1/10-scale 2WD and 4WD, touring cars, and 1/8-scale electric and nitro buggy;1/8-scale nitro buggy is by far my favourite.
AW: What is your home track? How does the racing scene in your area vary from other places you’ve visited?
MM: My home tracks are the Full Speed RC indoor and outdoor tracks. The racing scene here is way different than anywhere else really. We don’t have super-old clubs like there is in Europe, or businesses that have been put up with huge amounts of money like there is in the US. Most of our clubs are just a bunch of people that together make up for the money and work to make a club work. 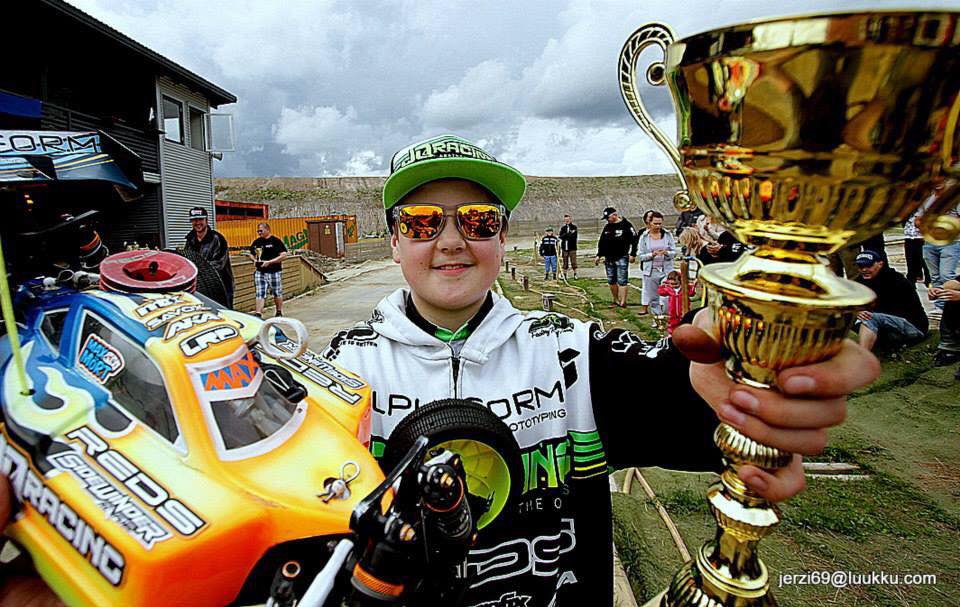 Photo: Jerry Hellström, via Facebook
AW: What are your proudest RC moments?
MM: I’d say winning the Junior final at the Euros in 2015 was a great feeling as that year was a huge improvement for me as a whole and I drove that final with zero mistakes on a track that was relatively difficult. Second one might be my performance last year at the Euros as a whole as last year was really really difficult and that race was the last big race of the year and I had a decent week apart from the last final. Third one is the most recent one at DNC winning the expert class.
AW: How do you feel about some of the drama that happened at the Dirt Nitro Challenge?
MM: I have personally never seen that much drama at one race but now after getting more involved with the American RC culture I can understand where the drama is from as that seems to be the goal of most people. Personally I find any drama funny especially if the reasons aren’t too serious and they really weren’t at DNC. Regarding JQ, the situation overall kinda sucked for everyone but there wasn’t really anything unclear. The drama regarding me has mostly made me laugh a couple of times; I have never had haters before so it feels cool. And of course the gyro accusations — it just has made a few more Americans look more dumb and ignorant of the European scene. 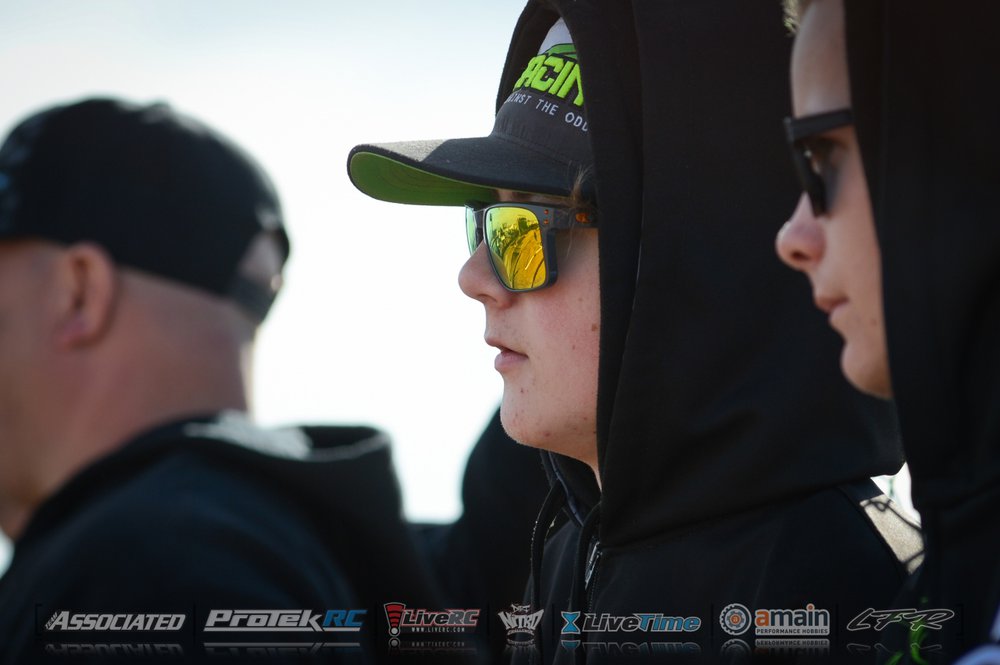 AW: Do you have any goals for your RC career?
MM: I wish I could carry on racing as long as I can. I don’t want to solely pursue a professional RC career, I want to go to school too. Yet I still wish one day I could make a living in RC and at the moment I’m focused on getting on a level that it could one day be possible.
AW: When you’re not at the racetrack, what are some of your favorite hobbies?
MM: Nowadays I spend a lot of time with my friends, or read or watch something online. I don’t really have anything I could call a hobby apart from RC, but school takes a lot of time and I consider myself a top-level sleeper so I use all the time I can. 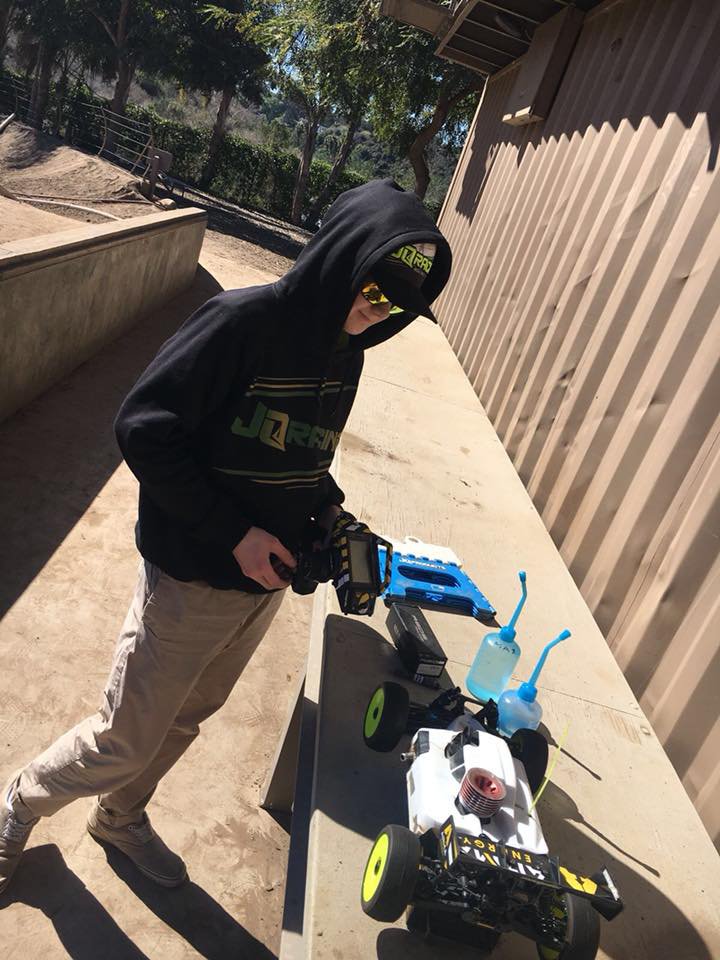 AW: What’s the best part of RC racing? What about RC racing annoys or bothers you?
MM: I hate when people get too serious and usually that causes arguments of who took who out and most of the time it’s just petty. On the other hand, there are a lot of people in the industry that are really nice and want to actually help each other out and make this a good community to be involved with. Also, the biggest joy for me is actually driving the car around a good track with a fresh set of tires. Sometimes I forget how fun driving actually is, but lately I've really started to love driving every time I hit the track.
AW: Who are some of the people that have helped you the most?
MM: Of course, both of my parents that are most of the time with me at the races with my little brother too. It's always great to have the support behind me. Then, of course, Joseph Quagraine who has pretty much taught me most of what I know sometimes just by letting me follow what he does. He has also provided me a lot of opportunities throughout the years. There has been a lot of people that have helped me through out the years — too many to name, but I am truly grateful for everyone that has helped me. 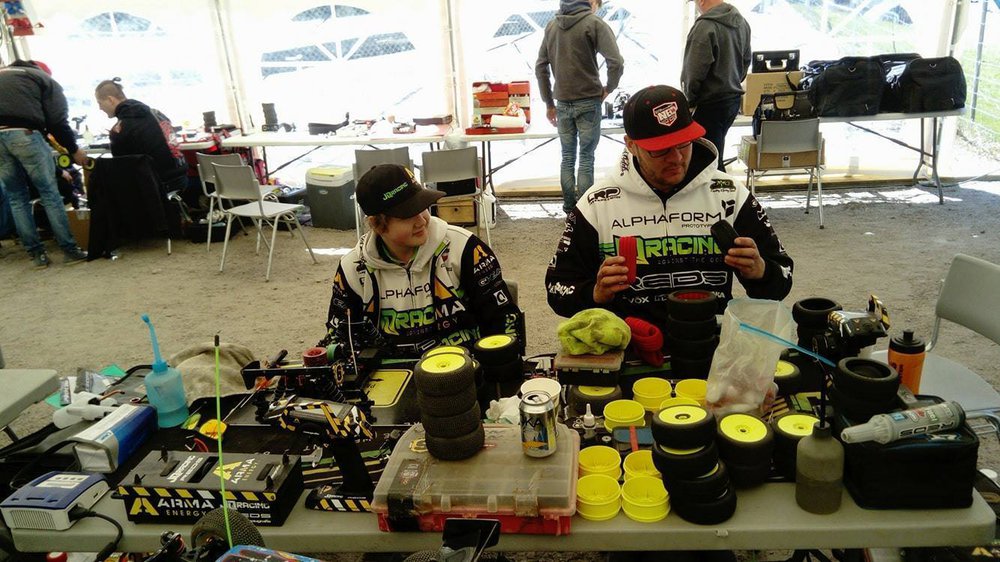 AW: Thanks for the interview! Is there anything else you’d like to add?
MM: I wish people go like my Facebook page Max Mört RC for updates of my racing as I don't update anything on my personal. I pretty much thanked everyone already apart from my sponsors which at the moment are: JQRacing, REDS, Jconcepts, LRP, Savöx, Sidewinder, Ghea and Maugrafix 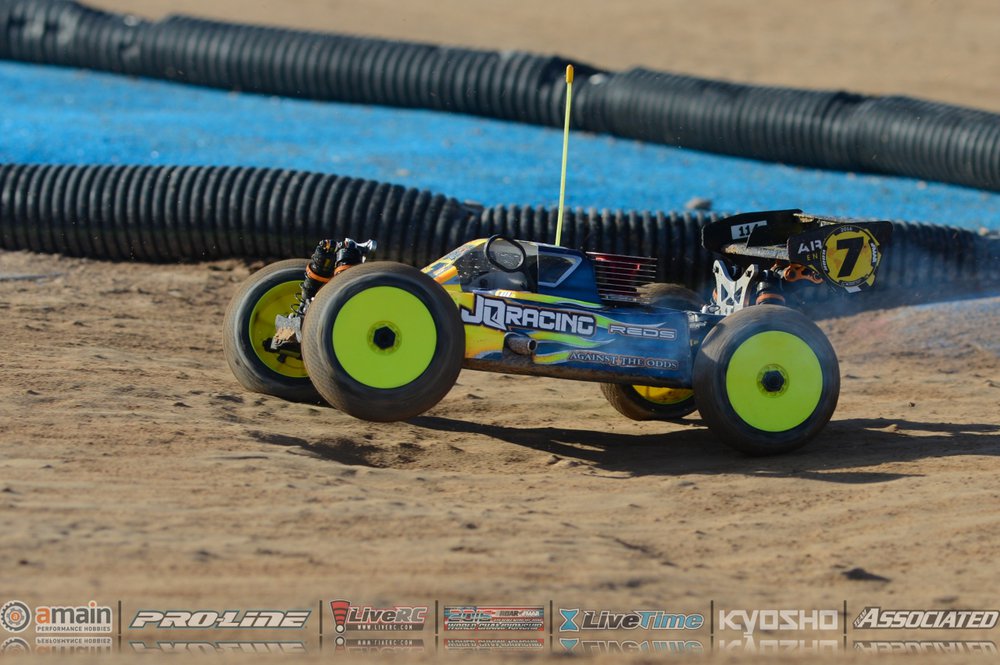