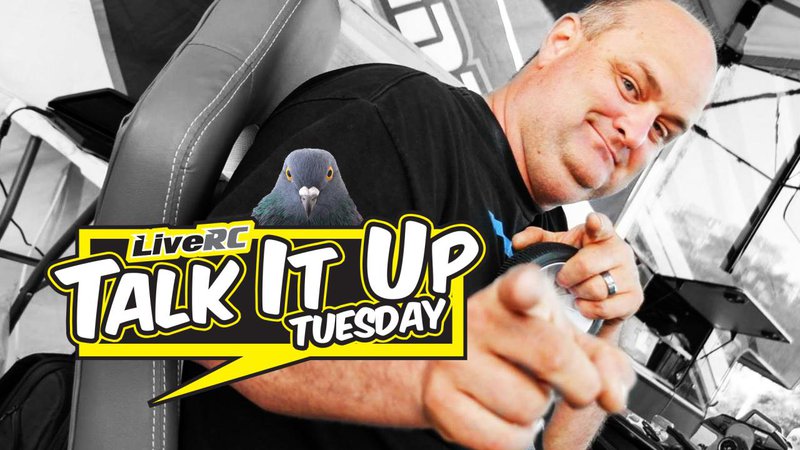 The 2018 ROAR Off-Road Fuel Nationals are getting set to be held at Southside Raceway in Lake City, Florida. The anticipation continues to build for racers attending, and we've sat down with Southside's main-man and Pro-Line Racing east coast team manager, Brian Lewis, for this week's edition of Talk It Up Tuesday! 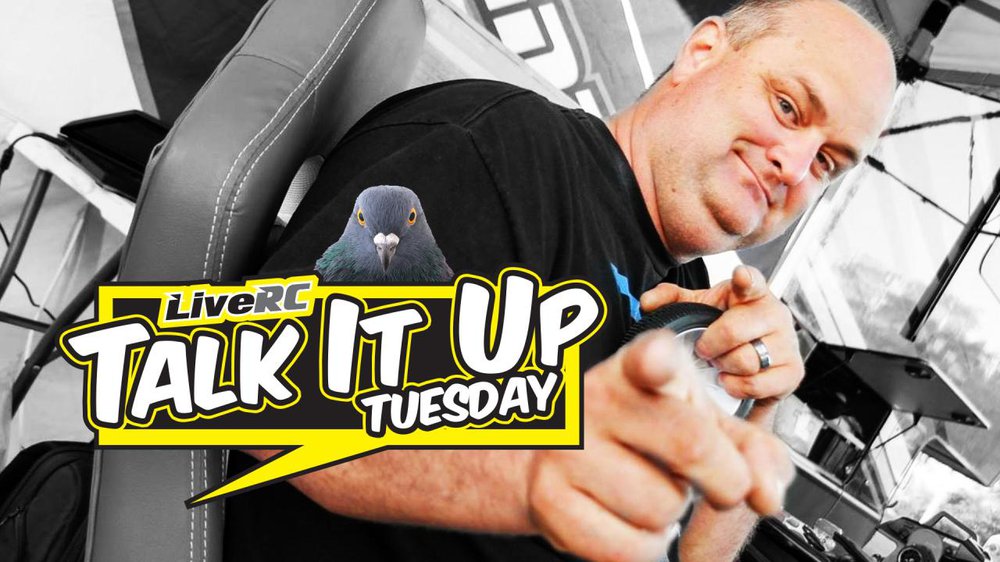 LRC: Brian, welcome to Talk It Up Tuesday! For those who aren’t familiar with Brian Lewis, tell us a little bit about yourself and how you got started in R/C car racing.

7 years ago, following Landen’s 12 Year baseball summer league where I coached him since he was 5 years old, we came across a race less than 20 miles from our house.  It was a small 10th scale, outdoor track.  After meeting some local racers and watching the race event that day, Landen and I knew we had to get some and join in.  7+ years later, we still race most weekends and never looked back.

LRC: We have to ask, several years back you were the center of R/C memes posted by your friends – all featuring pigeons in them. What is the story of the pigeon?

Brian:  Yeah, the pigeon meme’s.  The best part of RC is the friends you make.  And our group of friends just LOVE to pick on each other.  Nothing brings us more joy than to use meme’s on social media.  Basically, I was asking forever for the dates of the ROAR #4 Regionals.  The day after a vacation was planned and payed for to Pigeon Forge, TN, regionals was then planned for that that same weekend. So, since I coulnd’t go to regionals, all my close friends went to social media and started a Meme war of me playing with Piegons in Piegon Forge. I also mis-typed “Bob” as “Nob”.  So, of course, Nob, the pigeon was created and even got a Facebook page created.  What is sad, I think there is over a hundred followers on that stupid page.  LOL

Even to this day, anyone that sees a Pigeon, I get sent a picture of it. 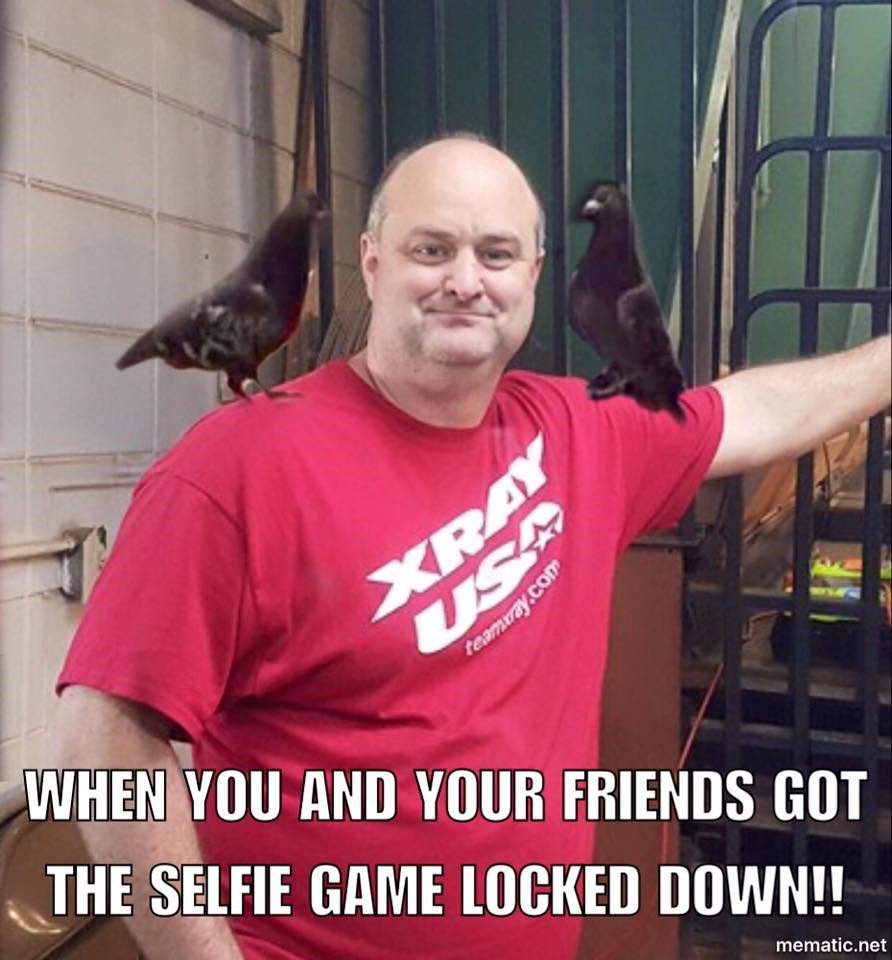 LRC: Southside Raceway is host of this year’s ROAR Fuel Off-Road Nationals. A lot has been changing lately in terms of the Southside crew, the track, etc. What exactly is your role now with Southside and the ROAR National event with all of these recent changes taking place?

Brian:  Yeah, ALLOT has taken place in 2 years at Southside.  2 years ago, Southside was mainly a basher track that the county built for locals to go out and have fun.  The few races they had, 10-20 entries would be all that showed up.  I approached those that were in charge and asked if I could put on a large race and in return, I would personally build a drivers stand, redo the track and improve the facility.  Since that day, we have not looked back.

Here are a few before and after photos: 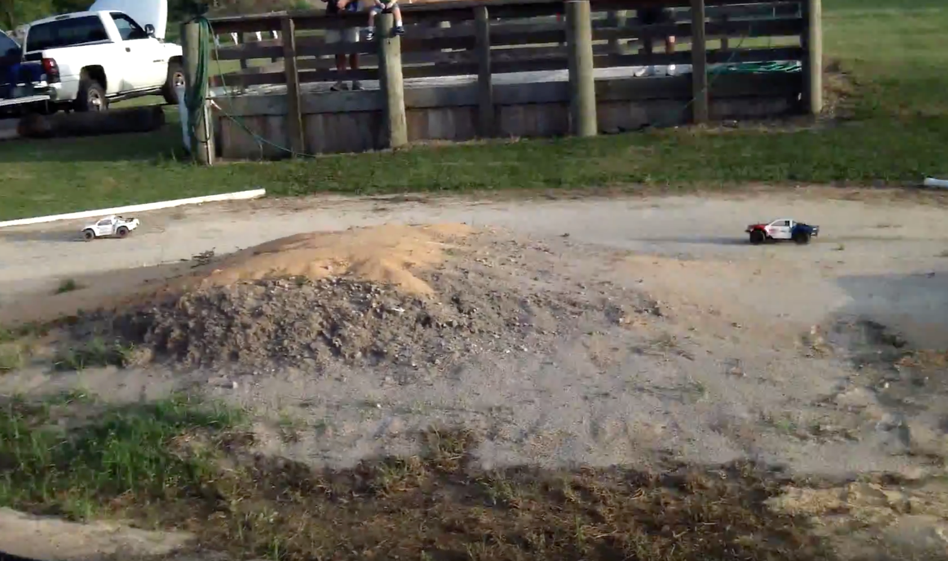 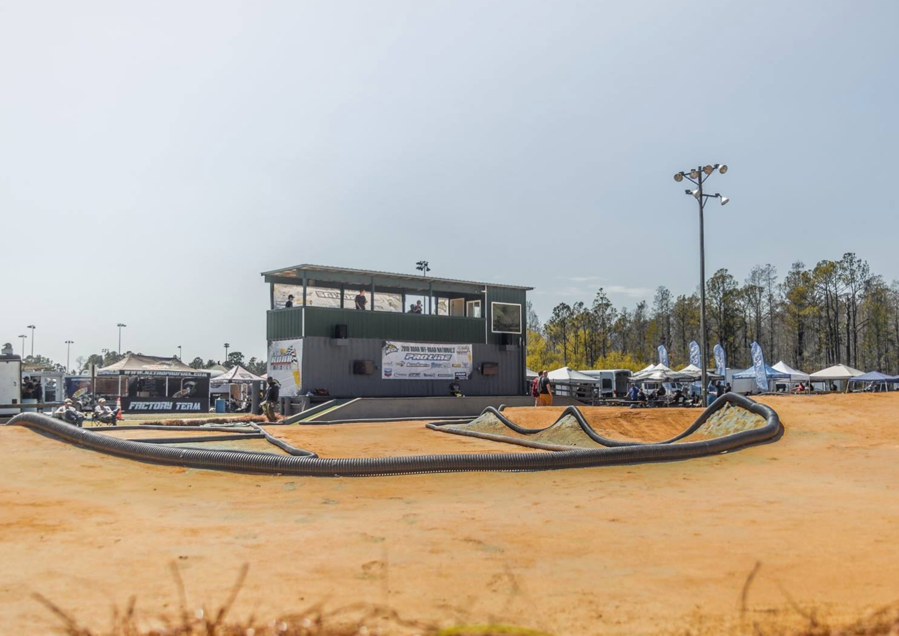 After so much work put in by the small group of great guys we have, the local county parks department has stepped up and supports us in every way possible.  With the relationship that we have, Southside will continue to get bigger and better.

LRC: This year’s ROAR Nationals includes an event program with all the drivers, designated event website, event guide, and more. What other sorts of things have you guys been working on to take this event to the next level?

Brian:  When I approached the club and shared that I wanted to host Nationals, I told them that if we got it, we are going all out.  My goal for this event is to put on the best event I can.  If there is anything that can make it better, then I tried to think of it and make it happen.  It seems that in the past, ROAR Nationals does not have that flare or the feel of the biggest race of the year.  I want you to know you were at something special the moment you step foot on the property.

It is important to me that several things happen:

1) RACERS:  The racers have a first class experience from being informed as to having every answer they may need before they even ask to making sure that I give them the best racing experience I can.  No matter how the race goes on the track, my goal is for every racer to walk away and know that we tried to think of everything and that they felt special for being part of it.

2) SPECTATORS:  Sadly, I feel as though our industry does a horrible job promoting itself.  I have flown to so many big races across the US to only see a hand full of local residents even know and show up to watch and be a part of the race.  We are going into 20+ schools across 4 counties inviting each kid to come out and watch as well advertising the event on local TV, Newspaper, Radio and such.

As far as things we have planned special, I can’t share everything but yes, we hired a publishing company to put together an event guide that has all kinds articles on RC and a profile section of each racer attending.  Each participant attending will receive one as well as these will be free to the spectators that show up.  It’s important to me that when families show up to watch, they know what’s going on and stick around to enjoy the free event.

One thing I am very excited about is a huge, 18.5’ LED video screen that will be track side to show live scoring, video and such.  Again, this is to give spectators and those trackside a way to feel more engaged.

LRC: Talk to us a little bit about the track itself. What sort of layout and surface can we expect to see? Supercross style and smooth, wide open and rough?

Brian:  I am so excited to have Joey “The Dirt” Christensen come and put in this year’s build.  Joey is known as one of, if not the premier track build in the world. Our track typically does not blow out like many those on the West Coast.  However, with the amount of racers and weeklong race, anything can happen.

LRC: What are you looking forward to the least and the most about this year’s event?

Brian:  Well, the weather has to be what I look forward to the least.  It’s going to be HOT and humid.  Drinking allot of water and staying hydrated is going to be very important for all involved.  But, I am so ready to get this event going and get all the big plans we have put in place.  It’s exciting to know that in such a short period of time, we took a basher track to hosting the biggest race of the year, outside of Worlds.

LRC: We must ask, who is your pick for winner in each class? Why?

Brian:  In Truggy, I have to go with my boy Ty.  He won it last year with his first year driving XRay.  Being that I run XRay as well, I know how far that Truggy has come in just 12 months.  Anything can happen, but I see a repeat from last year in that class.

As far as Buggy, I see another epic battle between Maifield and Tessmann.  Both of them showed up for the warm-up race in March and already have a feel of the facility, track and I personally feel the track conditions fit them perfect.

LRC: Aside from your duties at Southside Raceway and your full-time day job, you are also a team manager for Pro-Line Racing. How did that all come about, and what are some of your duties there?

Brian:  Proline was needing more exposure at the large races on the east coast and Daniel Adams and I always had a great relationship.  He and I seemed to always think the same way and wanted the best for Proline and the racers.  He joked around one day that he needed to bring me on board.  I never thought it would happen until he called me one day.  It’s been great working with Daniel and all the employees at Proline.  They support me so much.  As far as my duties, I pretty much handle all the team drivers that are Texas/Oklahoma – East.  Of course, Daniel is 100% in charge but he gives me authority for team changes and such.  I also try to attend all the big races on the East Coast I can to bring Team Support.

Brian:  I just love helping others.  When I see that someone on my team does very well and I played a very small part of that by helping in anyway, I feel it’s all worth it. I try to not let anything really stress me out.  But, I do find this position takes up allot of time.  It’s just hard to balance everything.

LRC: Do you have any specific up and coming drivers that you are really impressed with this year, and/or you feel could be an “underdog” threat at the Nats?

Brian:  Tanner Stees and CJ Jelin has been on a tear lately.  What they have done the past 12 months is amazing.  I will be shocked if both are right there at the end.

LRC: You are a racer as well, will you be racing at the Nats?

Brian:  Yes, but only because it’s my track.  I typically only focus on my son’s racing program and help him.  However, he’s older now and doesn’t need dad standing over him anymore.  So, I am going to run Buggy.  Top 100 is my goal.  LOL

LRC: Obviously you are very involved in the R/C racing industry and community, what is one thing you would like to see improved or changed in R/C?

LRC: What is one thing most people don’t know about Brian Lewis?

Brian:  I graduated from Liberty University with my Youth Ministry degree. 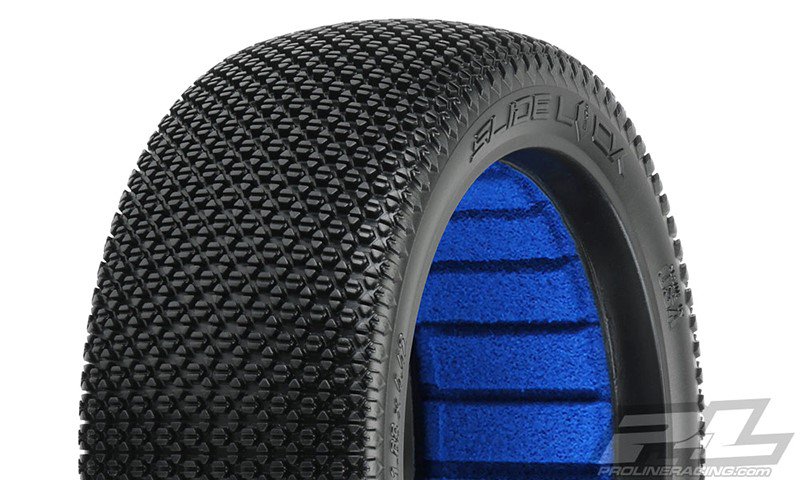 Brian:  Our new tire, SlideLock.  I was able to help out in this project.  It is a tire that we have needed here in the Southeast.  I can’t wait to see how it does at Southside and Nationals.

LRC: Favorite meme of yourself posted by friends or family? 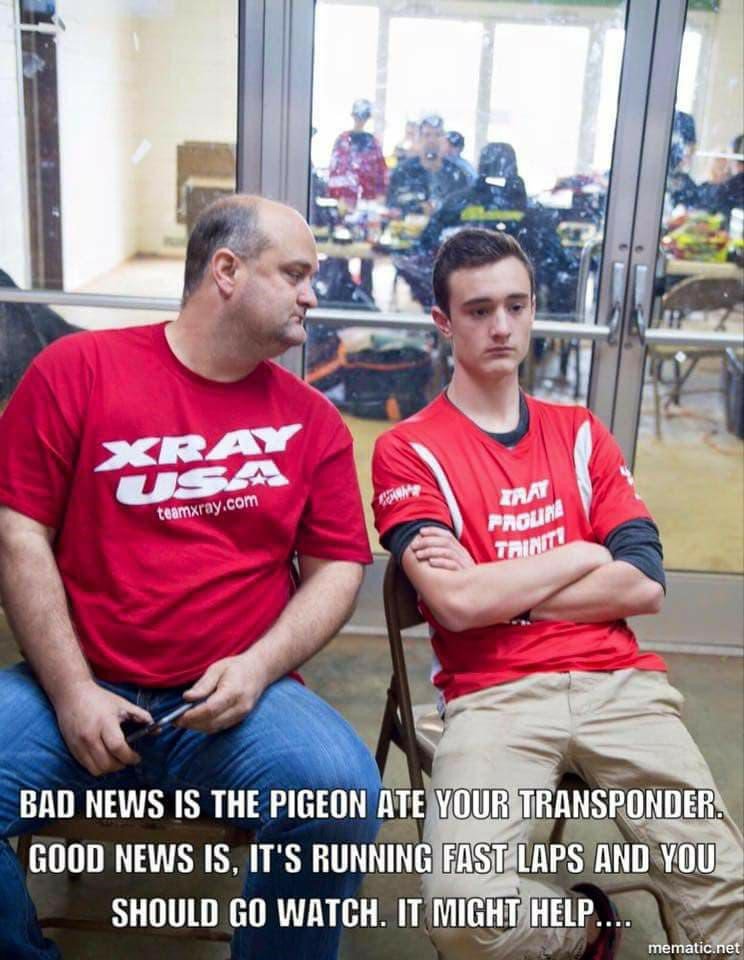 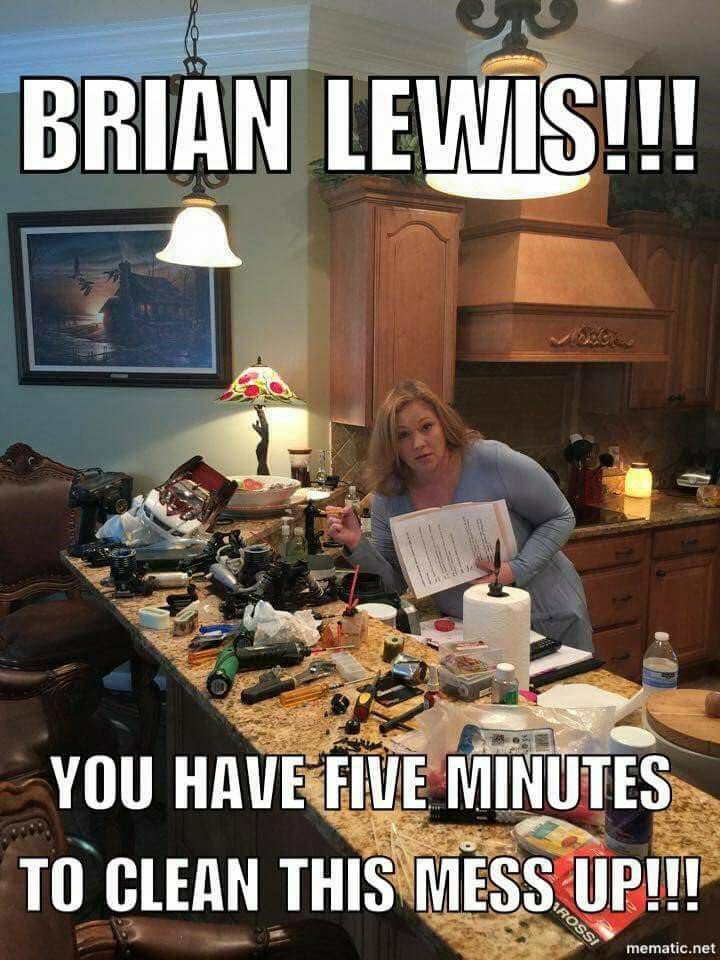 LRC: [Laughs] Thank you so much Brian for joining us today, is there anything you would like to add before we go?

Brian:  I am excited about Nationals coming up and if there is anything I can do for any racer attending, please let me know.  We have a web-site dedicated to answer most of your questions:  http://www.2018roarfuelnats.com

Also, I want to thank my wife for her loyal support of me as I always seem to take on more roles and outside projects.  And by the way, #RCISSTUPID