3/4/2014
By Mike Garrison
LiveRC.com
Welcome to LiveRC's weekly column, "Talk-It-Up Tuesday!" Here we spend a little time talking with industry icons including racers, manufacturers, team managers, developers, promoters, and everyone in between! Sit back, relax, and go behind the scenes as we interview them all!
A lot seems to be changing in the R/C racing world as of lately. Carpet touring cars are receiving aluminum chassis's, short LiPo batteries are turning square, short course truck is now accompanied by short course buggy, 1:8 offroad bodies are beginning to look like the good ol' days, and foamless tires have even hit the market.
While they are not involved in ALL of the major happenings listed above, one company that is involved in MANY of them is none other than Pro-Line Racing. We have sat down once again this week with Pro-Line designer, Matt Wallace, to get the inside scoop on what's going on and the latest developments in R/C. 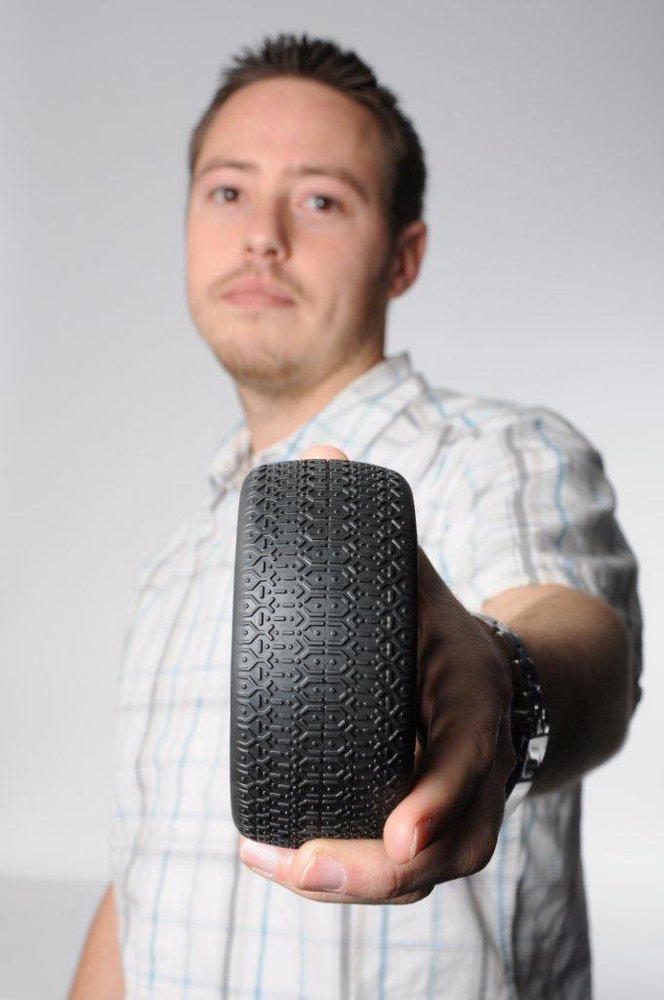 LiveRC: Welcome back Matt to another edition of "Talk-It-Up Tuesday!" We spoke with you not long ago, but since that time a lot has happened in the world of R/C for Pro-Line Racing. Let's start off talking about Pro-Line team driver, Ty Tessmann's huge success at the Dirt Nitro Challenge. We all knew he was fast, but did you think he would win both classes in such a dominating performance?

Matt: Racing is very unpredictable and anything can happen (especially at a Nitro race) but Ty is incredibly fast and Ty and his family put in the work to be the best. Ty actually stayed down at Pro-Line between Reedy Race and Nitro Challenge to put on a 110% Racing class with his father Gord to teach racers how to properly prepare for Nitro Racing. Ty also did a bunch of testing and videos for Pro-Line while he was down too. Ty and his family definitely deserve it. But my claim to fame while Ty was down was crushing him at Flappy Bird. Ty: 47 Matt: 110 Ha ha!

LiveRC: What compound, tread, and foam setup was Ty using to win both buggy and truggy? 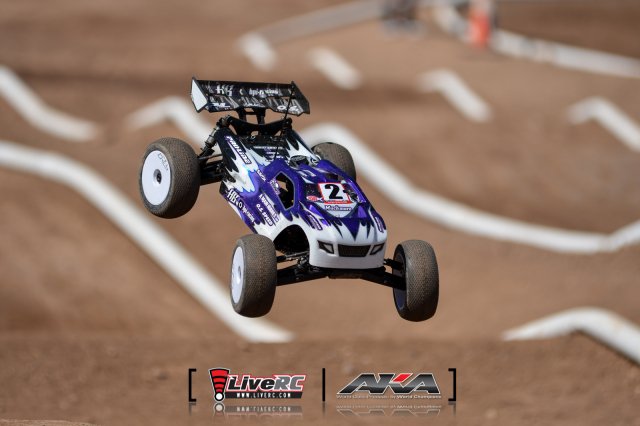 LiveRC: Were the majority of the Pro-Line drivers all running the same tire setup on their cars?

Matt: Yes, basically all of our drivers chose Blockades for the Main Events and Hole Shots for qualifying but with slight variances in compound for the changing track conditions throughout the long Nitro Challenge days.

LiveRC: At the Dirt Nitro Challenge, Ty Tessmann's D8 buggy was equipped with the new "Type-R" body. The appearance of it surprised many as it did not resemble the cab-forward design and look we have become accustom to over the past few years. Instead it appears to follow more of classic "Crowd Pleazer" design. Why is this?

Matt: From testing Ty has determined that his cars no longer require the full cab forward down force effect to gain the steering he needs to win. Another way to look at it is the geometry of his 1/8 Buggy and 1/10 buggy have developed to the point where they already have enough built in steering without requiring the body’s help. So, Ty sent Pro-Line a drawing of a body shape he liked and we worked together to create the Type-R design first seen at the 1:10 Worlds in Chico on his 4wd Buggy. Pro-Line has now brought that design to 1/8 Buggy. 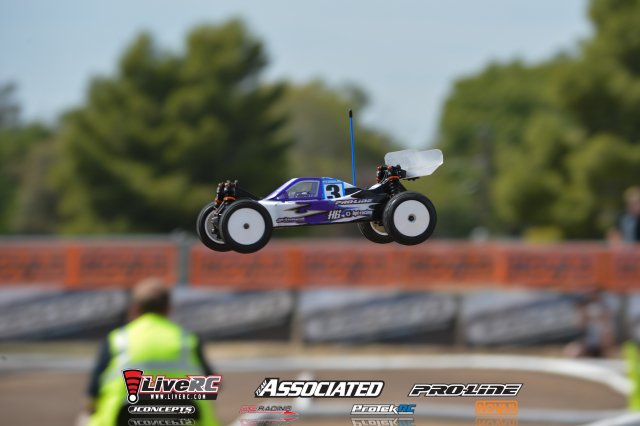 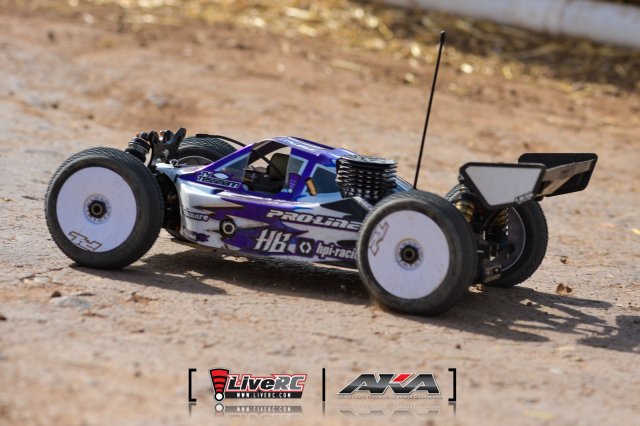 LiveRC: Let's talk a bit about the new "Striker" short course tire. Obviously, as Tessmann displayed in the promo video, the tire works well whether you are hitting the skate park or rally racing through the desert. Who and what was this tire designed for?

Matt: The Striker is a low-profile Short Course tire designed for the new Rally cars like the Traxxas Rally®. The tread pattern harkens back to the original Pro-Line Striker tread that dates back to the 1980’s, which was originally designed for the street. We modified it slightly to make the tire work great in other conditions like hard-packed dirt, gravel, etc.

LiveRC: One very unique feature of this tire is what you call the "Pro-Core Technology." Explain to us exactly what that is, and where the idea came from.

Matt: Pro-Core Technology is Pro-Line’s Patent Pending process where the tire insert is molded in with the tire, eliminating the need for a separate foam insert. It consists of many rows of lateral crossing ribs of rubber inside the core of the tire that supports the tire just like a foam insert. We originally developed the idea for the Street Fighter SC tire because road tires like firm inserts and the added stability from the slight increase in weight. We released the Pro-Core version of the Street Fighter on our website only as a test of its market performance, so that’s why it probably didn’t make headlines a couple years ago. With the Striker tire, the technology has matured and we are ready to deliver foamless tire technology to the masses.

LiveRC: A tire without foams seems like a dream come true for most R/C enthusiasts, both racers and bashers alike. Has there been any consideration to adapting this technology to a more competition based tire?

Matt: Definitely. But at this point in the development of this technology, there are only a very select few track conditions that a Pro-Core tire will be faster than a foam tire. Someday very soon that may change.

Matt: Yes! I am very excited about releasing the PRO-2 Buggy conversion to the masses. As the name suggests, it allows you to convert your PRO-2 SC truck (or Slash® with Pro-Line upgrades) to a PRO-2 Buggy. We didn’t exactly follow the ful-size Short Course Buggy look and went for more of a Desert style Class 1 single seat Buggy when designing the cage, which turned out even better than expected. There are also several unique design features of the PRO-2 buggy conversion that are worth mentioning: The whole cage comes off in one piece (including the rear engine covers) making it the easiest buggy ever made to work on; The front bumper has a built-in shock absorption feature while maintaining the all-important scale looks; and the cage is held on by Pro-Line’s innovative secure-loc screw on body mounting system, so you don’t have to mess with body clips. Look for full details to be released shortly.

LiveRC: Short course buggy racing surged on the scene over the past couple of years, but since that has lost the backing of several major manufacturers including names like Losi. Do you think SCB is still potentially the "next big thing" in short course racing?

Matt: I honestly don’t know if SCB racing will ever take off like SC racing has, but I do know that racers and bashers alike will appreciate the scale looks and performance that Pro-Line’s PRO-2 Buggy conversion offers.

LiveRC: For those who haven't experienced driving both an SC truck and and SC buggy, what are some of the major differences between the two on the track?

Matt: SC trucks and SC buggies actually drive like completely different vehicles even though they are based on the same platform. Buggies don’t have that huge body that gets caught in the wind, so it jumps 10 times better than a truck and also feels more agile. Buggies also look way more scale and just look better going around the track. The downside to buggies is that they have open wheels, so you can’t bang doors like the SC trucks and expect to keep driving like nothing happened.

LiveRC: You have recently released the new "Phantom" bodies for several of the 1:10 buggy platforms. Can we expect to see more "Phantom" releases for the various other class vehicles in the future?

Matt: Yes, definitely! The Phantom design has been a huge hit, so you can expect to see them to take over like the Bulldog line did. 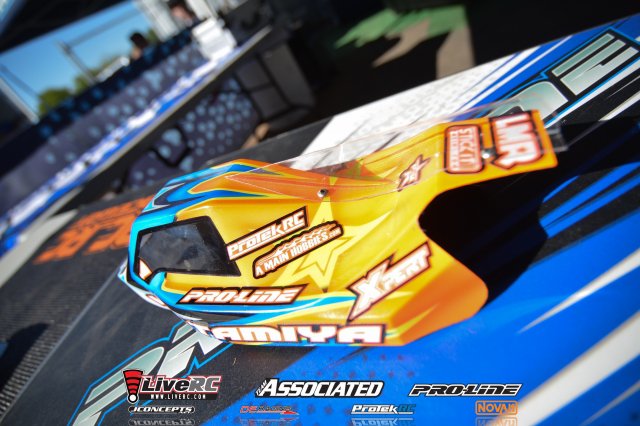 LiveRC: The "Phantom" bodies feature an optional bolt on stabilizer. Can you explain to us how this stabilizer works, and what sort of conditions it might be an advantage in?

Matt: The center fin adds stability in high speed corners by acting as a side dam. I know some people will be skeptical but it actually makes a huge difference on the track. Take it off and the rear end of your buggy will be more free, which could be good for tight indoor tracks. Our team drivers would have ran the fins at the 1:10 Worlds in Chico last year because those were ideal track conditions for it but IFMAR has a rule against add on body features.

LiveRC: The legendary Pro-Line Cactus Classic is fast approaching. Will we see more new Pro-Line gear debuted at this event?

LiveRC: Who is your number one pick to win 2wd and 4wd buggy at the race?

LiveRC: Thank you very much for joining us once again Matt! We certainly look forward to chatting with you again soon, and in the meantime get back to work and design us some tires! :)

Matt: Thank you Mike and LiveRC for having me on! I hope people like getting a small peak into the development side of Pro-Line. There are even more cool things in the works that I just can’t talk about yet. This year is going to be exciting for sure.
JOIN US NEXT WEEK FOR ANOTHER EDITION OF "TALK-IT-UP TUESDAY!"