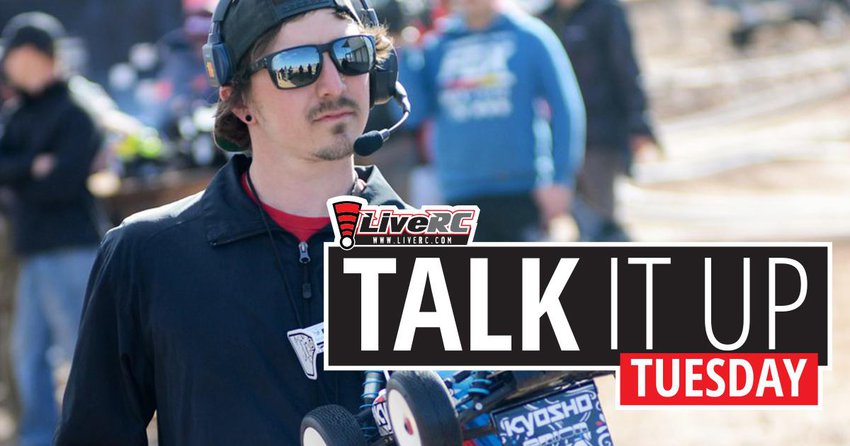 As the 2018 racing season is winding down, we sit down with Kyosho America team manager, Zachary Rogers, to discuss his new R/C National Series (a nationwide nitro and electric off-road racing series featuring a new format, cash payback, and a points ranking system to crown a national champion). Zach shares the full details and plans for the series as well as a bonus video interview with even further in-depth answers and information. 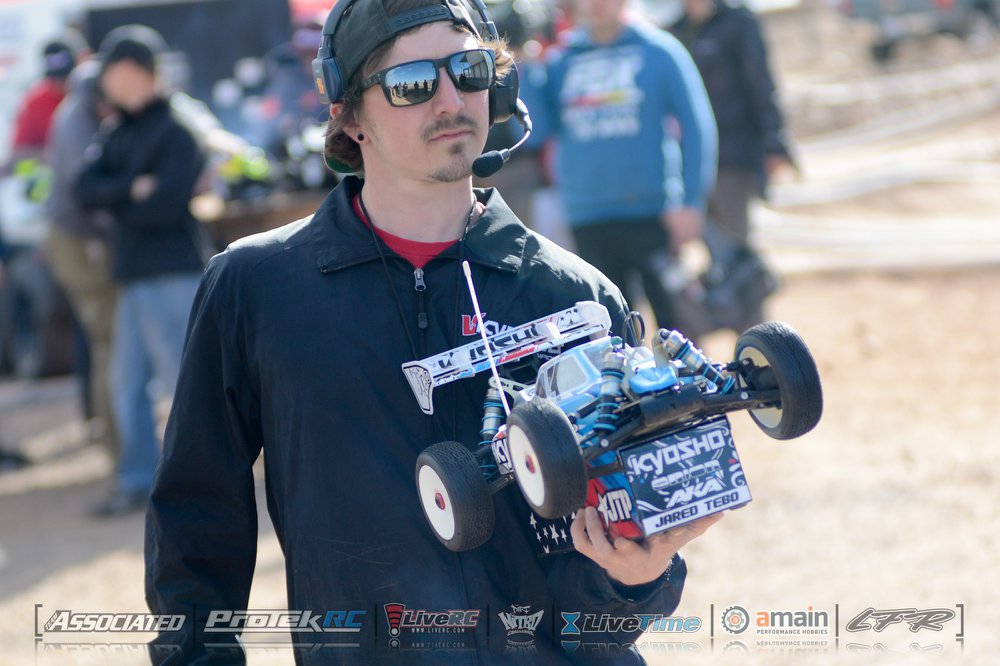 LiveRC: Welcome Zach back to Talk It Up Tuesday! Last time you joined us you had just taken on the role of Kyosho America team manager. Let’s start off by following up on that. How have things been going, and are you happy with the way things have been going this year?

Zach: Things are going great! It has been a very busy but an enjoyable ride to say the least!

LiveRC: Obviously you have built a work relationship with team driver Jared Tebo, but is it fair to say that you guys have built a pretty strong personal friendship from working together as well?

Zach: Jared and I have been friends for awhile, as we raced/traveled together before working together, but no doubt we have grown to be better friends more so now then ever.

LiveRC: Silly Season is just getting started, and with this being a contract year for Jared the rumors are flying. If Jared departs Kyosho and joins another team, is there any possibility of you joining a new team as well as team manager?

Zach: I don't think things would change for me. Kyosho America has been great to me and I can't see myself changing teams.

LiveRC: We asked our viewers in a poll which chassis manufacturer will see the biggest changes this Silly Season. Which brand do you think it will be?

Zach: Not really sure what is going to be the biggest change, but the amount of changes is going to exciting for sure.

Zach: Ya, it is no secret that most of the semi serious racers all the way to the pros want some sort of real National ranking system/series. With that being said, that is pretty much what we are trying to achieve with R/C National Series.

LiveRC: The job of a race promoter (let alone a series promoter) is no easy task. What made you decide to take this on and start a series like this?

Zach: I didn't really go out searching to take on this task....just seems like nobody was actively trying to make anything happen in this department, so I have kinda took it upon myself to at least work on something to lead us in this direction.

LiveRC: The series will offer a cash payback to the racers, which is something that we don’t see very often in R/C racing. Tell us a bit why you decided to bring a cash payback into the series?

Zach: The idea of cash payout is obviously to attract the best talent around, however it is to hopefully control sandbagging a little bit. As we will have cash payout in the Open/Stock classes for the top 10 drivers per round, but no "full series" cash payout at the end of the series. Where as the Pro/Mod classes will also have top 10 cash payout per round(at even higher rates then the Stock/Open classes) AND overall top 10 cash payout for the whole series.

LiveRC: One of the biggest complaints in R/C racing is how long the age-old format of all-day practice, IFMAR qualifying, and mains usually takes at a big race. You have a new format in mind for the R/C National Series to shorten this up and keep things fun. What is the new format, and how will it work?

Zach: Ya our current format is very long and boring, and I actually think is a BIG problem in our industry. When companies have to pay for hotel rooms, rental cars, and food per diem, plus free tires/product for all these days of racing, at 5-6 days per event for most races, you can see how much that cost a company. Now reverse that situation and look at it from the customer base of racers in our industry, if little Billy and his dad are into traveling around and wanting to go to the "big" races, both son and dad have to take all this time off from school and work(possibly unpaid vacation time) and then they have to pay $500 in hotel and eat out every day(probably at least $30 a day in food minimum), maybe they also have to get a rental car(another $250), etc....all this money spent outside of the industry because events our so long, instead of using that money to spend in OUR industry.

I feel that we don't need 2 days of practice, then 2 days of qualifying(10 mins of track total a day per class) and then a main day(where you may only have one 5 min main event.) So I purpose that we follow similar formats as almost all other forms of racing but with a little RC twist on it. We would have Friday(12-9) and Saturday(2 hours in the morning) practice and everyone will get a hole punch card for 5 runs per class and they can use as they please(either day/split it up) so that a racer can even show up Saturday morning and still have the opportunity at the same amount of track time as everyone else. Then we would move into a single round qualifying format, taking drivers best 3 consecutive laps. This is better because IFMAR qualifying causes to many people not wanting to pull over as they are on a "full run time counts" format, as well as the need for so many rounds of qualifying because if a racer has one mistake in his IFMAR qualifier then the whole run is trash. The best 3 consecutive lap format allows racers to not stress if they have to pull over for a driver or if they crash once or twice, because they can just reset themselves as they only need 3 good laps in a row to have a decent chance at a good qualifying time. Now onto main events. So I am sure I already have people freaking out about how they will never be able to make mains now from that style qualifying because they need a full 5 min run to count because they aren't fast, they are consistent.....well that's great....you will love the double mains format. From qualifying you will go directly into double mains of which the top 2 drivers from each set of mains will bump into the next set of mains(both your main results combined will determine overall finishing positions.) But now you ask, what if I break in one of my mains...I have no more chances at going to the main...NOPE, we will have a LCQ for the top ten SINGLE fastest main times that didn't make it into the main event, of which the winner of that race will go to the main event. In theory this should keep you trying to race/go as fast as you can the whole event as you will have a chance at making the A mains throughout the whole duration of the event.

LiveRC: In addition to a different race day format, the series will also be using a nationwide ranking system based on points. How will these points be awarded, and will there be a “champion” of each class at the end of the series?

Zach: Yes so the idea is to only do this for the Pro/Mod classes. We will have one throw out round per series, and the points structure will go as follows:

LiveRC: What are the different classes each event will offer?

LiveRC: Will you be attending each of the races and/or have a crew working for you to attend each event?

Zach: Both, I have budgeted in the business plan to have a paid media person, tech person, and race director...so I can as relief in all those areas as needed, as well as just make sure everything is running smoothly behind the scenes.

LiveRC: Is the R/C National Series affiliated with ROAR in any way?

Zach: We are not, but that isn't because of any reason. We would love to team up with ROAR as our tech enforcement, but I don't think they would be interested at this point, and certain terms would have to be agreed upon from both parties in order to make sure everything would work properly and benefit the series/racers.

LiveRC: Will the series be using ROAR rules?

Zach: As of now that is what we are going off of, but we will do whatever makes the most sense to benefit the industry and racers long term.

LiveRC: What is your ultimate goal in building the R/C National Series?

Zach: Make R/C racing more fun and official from the amateur to pro rankings. Generate more interest in the racing side of our industry and hopefully that translate into financial benefits within the industry as well.

LiveRC: The dates of the events have been set, but the venues are still to be announced. If a track is interested in being a part of the R/C National Series, how can they go about doing so?

Zach: We worked around the already existing dates of all the major races for 2019 the best we could, but our dates our not set in stone as of yet(that is if the series even kicks of in 2019.)  As for venues, we have been contacted by over 20 tracks thus far (some of which are already world known track, and have held some of the biggest races in our industry) but we want to have biggest selection possible in order to make our races the best suitable to racers(close to airports, enough pit spaces, parking, etc) so if you or your track is interested please email us at info@rcnationalseries.com.

LiveRC: Where can racers and tracks find more information about the series?

Zach: Head over to www.rcnationalseries.com and you can checkout everything from our concept and outlook of how the points page will look, driver profiles, fantasy league, our store(CHECK IT OUT, it has some cool concepts never seen in the R/C world yet), etc...

LiveRC: 2019 is going to be an exciting year in R/C racing for more reasons than one. We wish you the best of luck with the new series, and we are anxious to see it all unfold. Thank you very much for joining us today Zach, is there anything you would like to add before we go?

Zach: Yes it is! First off just want to say thanks to LiveRC for reaching out and helping expose our concept to the RC community. I can promise everyone that if it doesn't happen this year we will push 100% to make it happen 2020(but believe me I will do my best to make it happen sooner than later.) Also huge thank you to all the people that have supported the idea thus far.

Check out the extended video interview provided by Zach to hear more in depth answers, and some fun bonus questions/responses!