TALK IT UP TUESDAY: Zachary Rogers 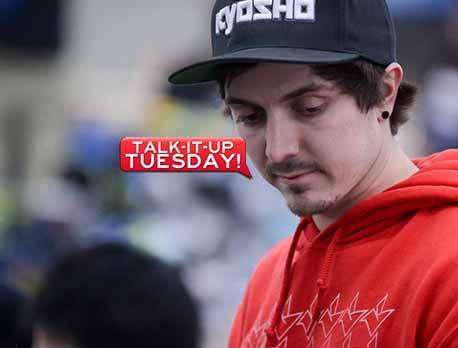 Welcome to LiveRC's weekly column, "Talk-It-Up Tuesday!" Here we spend a little time talking with industry icons including racers, manufacturers, team managers, developers, promoters, and everyone in between! Sit back, relax, and go behind the scenes as we interview them all!
I met Zachary Rogers about a decade ago, when he was a young racer from outside the SoCal hotbed that popped up at occasional races around the area — often near the front of the pack. I watched as he improved within the RC scene, and then vanished, only to come back and now step into one of the most coveted roles in racing as Kyosho America team manager. I reached out to Zack on Facebook to share the story of his life and RC career in this week’s Talk It Up Tuesday. 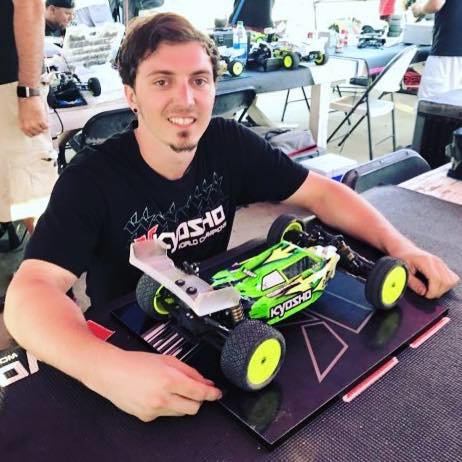 Aaron Waldron: How old are you, and where are you from?
Zachary Rogers: I’m 25 years old, and I am from Bakersfield, CA, which is also where I currently live.
AW: How did you get into RC, and how long have you been racing?
ZR: I got into RC the same way as many — with my dad. We raced go-karts until I was a preteen, and transitioned into RC once money got a little tighter. I was around 12 at the time, and have been doing it off and on since then, so a little under a decade of actually racing. 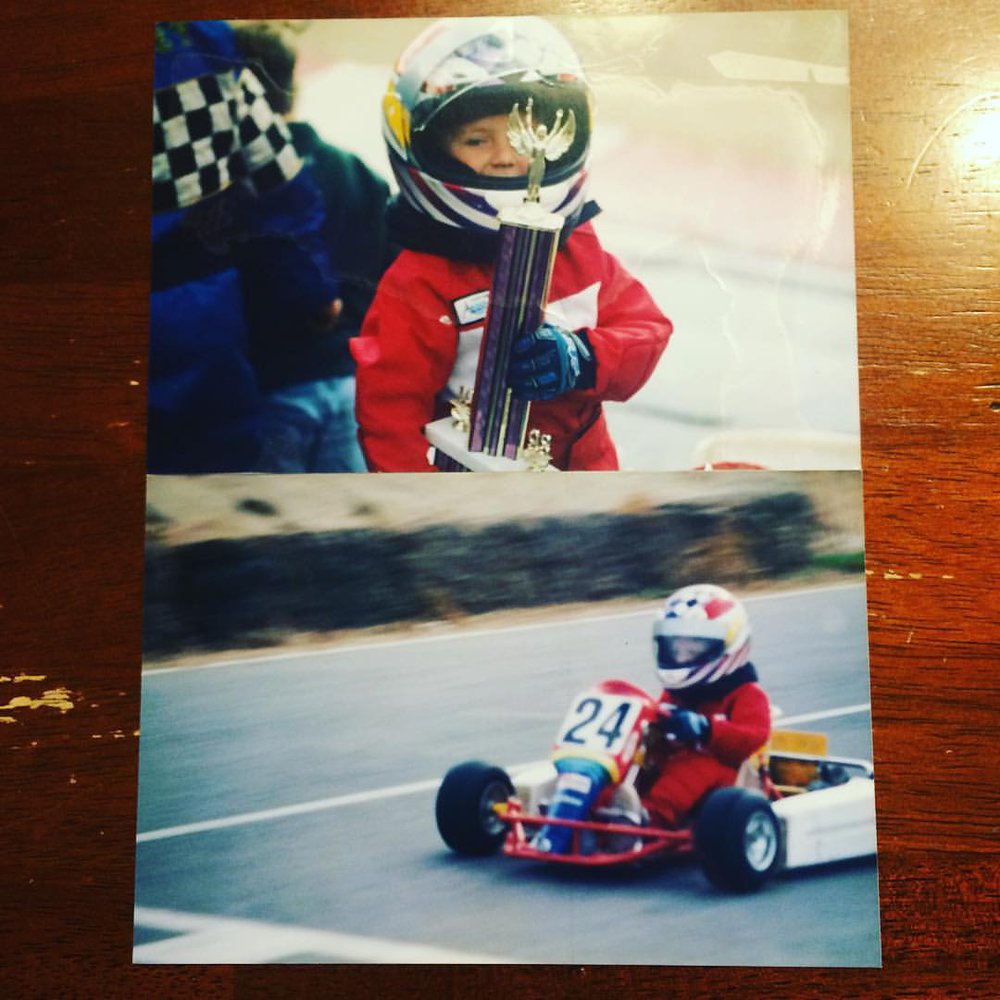 AW: Did you talk to Kyosho about becoming the team manager? Or did they approach you about the opportunity?
ZR: They actually approached me, I was contacted with little information about what they wanted to talk about, but more of an invitation to discuss a possible job in the industry, and when I arrived they notified me about what it was regarding.
AW: What do your weekly tasks look like?
ZR: Mostly answering about 30-40+ social media questions a day via Instagram and Facebook, and, of course, lots of emails with drivers and our office guys. About once a week I take care of setting up and booking upcoming races, as well as doing expense reports. I have also lately been working on some new Kyosho apparel designs, so keep on the lookout for a press release on LiveRC about those! 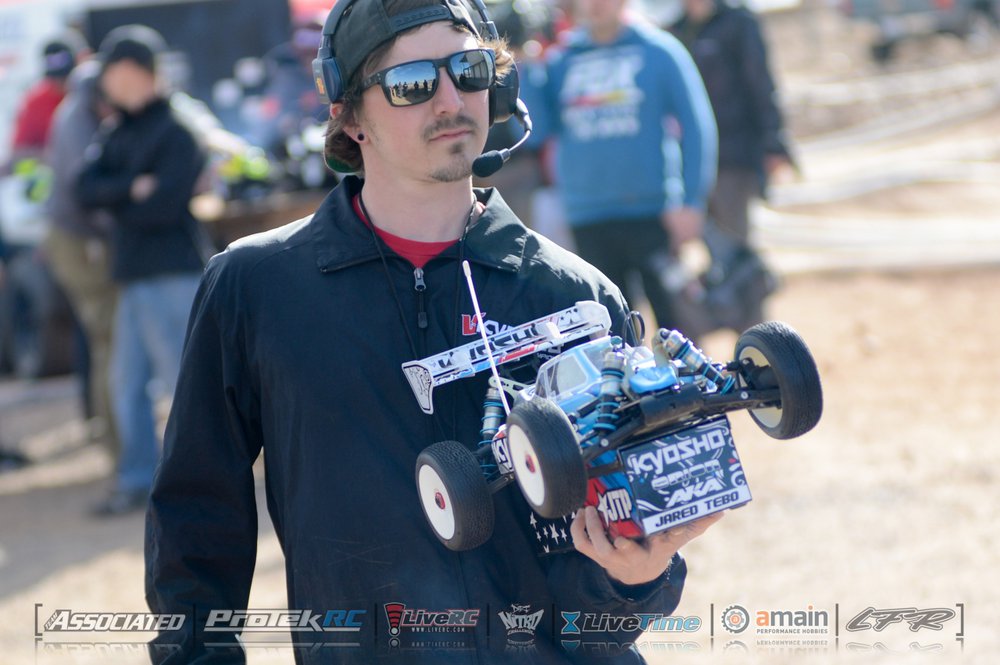 AW: Do you race more or less often than before you took the job?
ZR: I’ve been attending more big races, and doing much less club racing and practicing — which needs to change!
AW: Was it difficult stepping into a role that had been held by the same person for so long?
ZR: Luckily for me, Joe Pillars — who filled the role before me — is a good friend and has helped me in the transition. On top of that, Kyosho has been very laid back with me and allowed me to kind of just be me, and trust me with the task at hand. 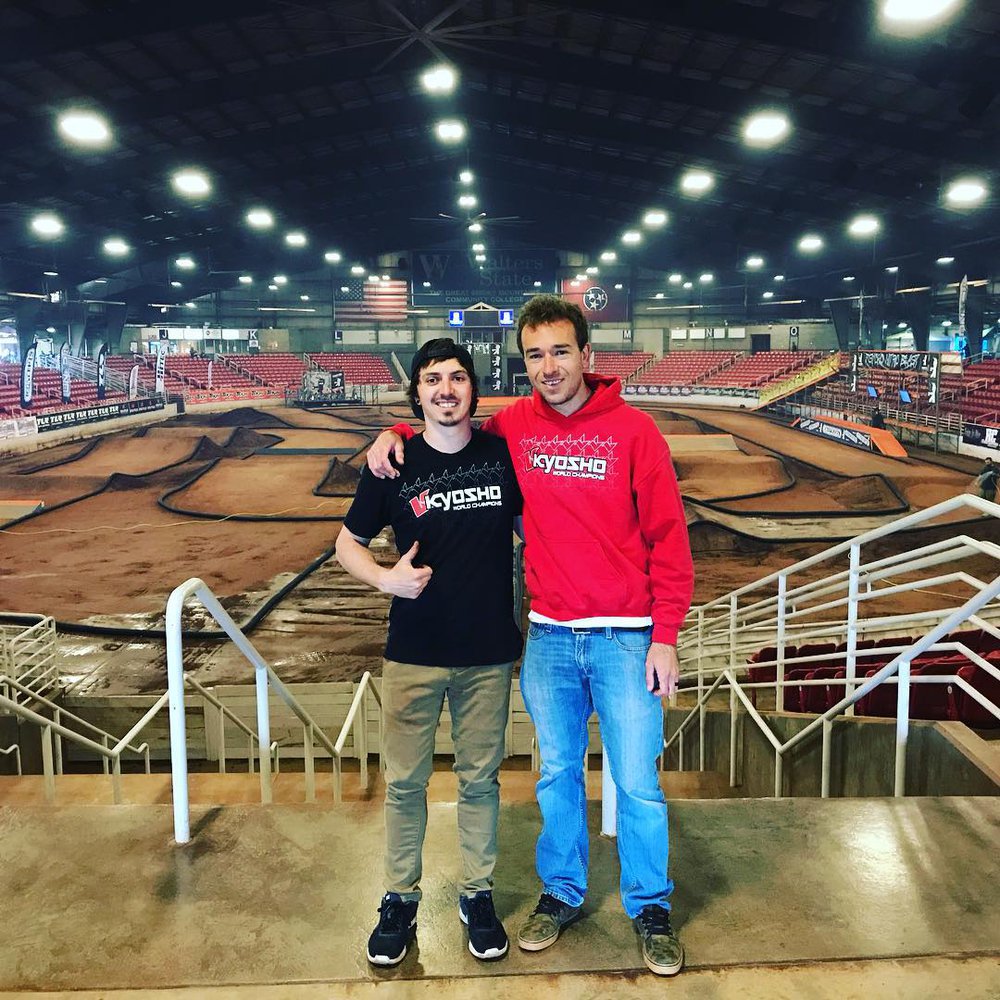 AW: What’s your favorite track? Favorite big event? What different classes have you raced - and which is your favorite?
ZR: I think my favorite track has to be Murf's Intermountain Raceway in Utah. My favorite event probably would have to go to the Hot Rod Hobbies Shootout, but how it was six years ago, and PNB was pretty awesome this year as well! I have raced pretty much every class other than truggy, even some on-road, but mostly just 1/10-scale 2WD and 4WD Modified Buggies — with 2WD Mod being my favorite class.
AW: What is your home track? How does the racing scene in your area vary from other places you’ve visited?
ZR: I am actually fortunate enough to have two awesome clay tracks within 15 miles of me: Rainman's Hobbies and Bakersfield RC Experience. The racing scene in Bakersfield is actually pretty decent compared to lots of other areas I think, due to our deep racing heritage in this town. It still isn't as healthy as it has been in the past, and it isn't as big as OCRC, but we do have an active 40-plus racers weekly at any given time of the year. 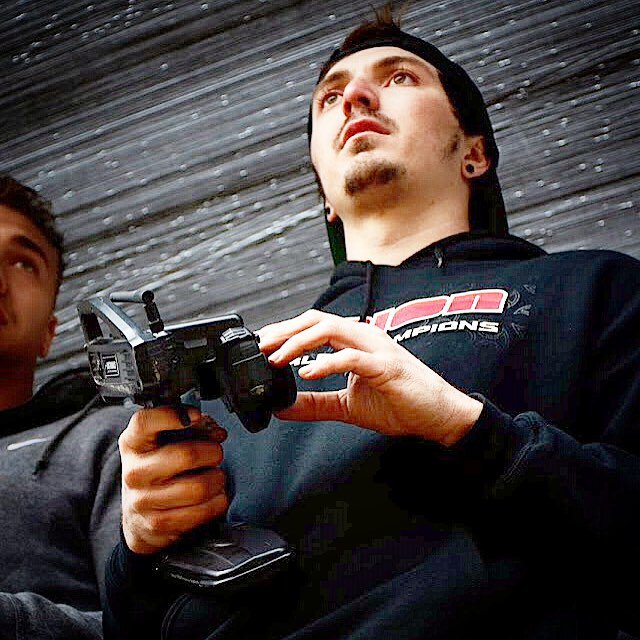 AW: What are your proudest RC moments?
ZR: I have a lot. As for racing, finishing in second place at the ROAR Nats in Stock Buggy and making an Open-class A-Main at the Reedy Race were both pretty sweet — although they were awhile back.
AW: Do you have any goals for your RC career?
ZR: Yeah. Before I quit racing for a couple years, I had always dreamed of winning a ROAR National title in 2WD Modified. I think I may have been on track to do it back then, but with a big break in racing it has made that dream seem less reachable as my results have been so hit and miss since my return. I honestly believe I can do it with some serious effort put in, and that is all that matters — it just makes it difficult at this time to race those guys, while also managing the guys you are racing. Otherwise, my other goal would to be help grow the industry, give it a little more mainstream exposure, and just keep the fun alive in RC! 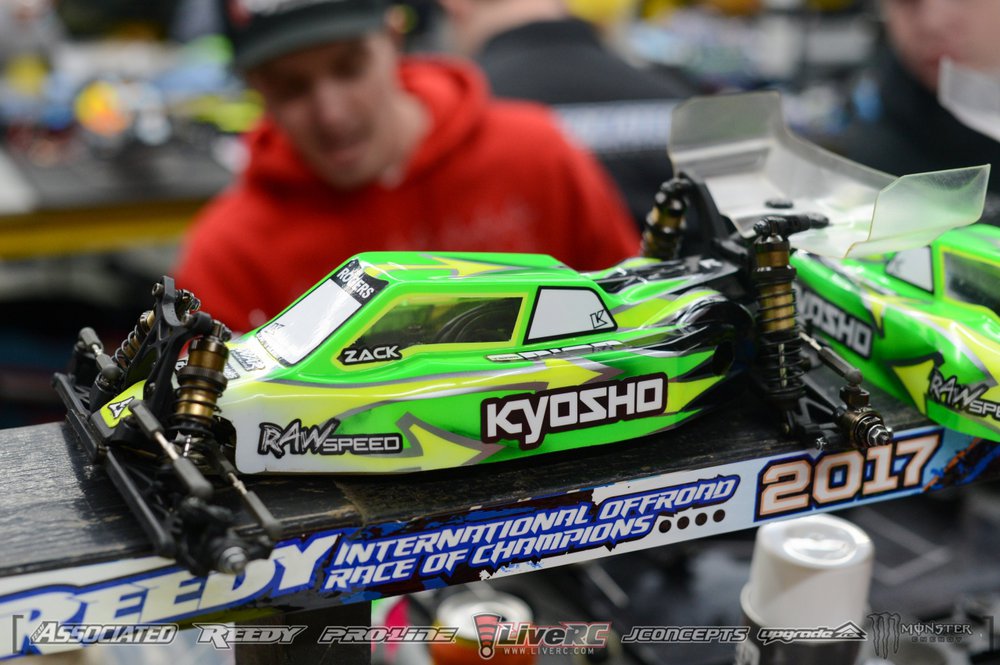 AW: When you’re not at the racetrack, what are some of your favorite hobbies?
ZR: I love riding my mini long-board (oxymoronic, I know) and working on my wallet company, CX Wallets. Other than that, just hanging out with my lady, and enjoying some concerts here and there.
AW: What’s the best part of RC racing? What about RC racing annoys or bothers you?
ZR: The community is the best part of RC for me. I have made most all of my real friends through RC. The biggest part of RC that bothers me is the lack of fun that can be had without some people shaming others. It has gotten to be way too serious with everyone having not only a chip on their shoulders about being sponsored, but that attitude of entitlement that comes with it; I am sure I have been guilty of at times myself. 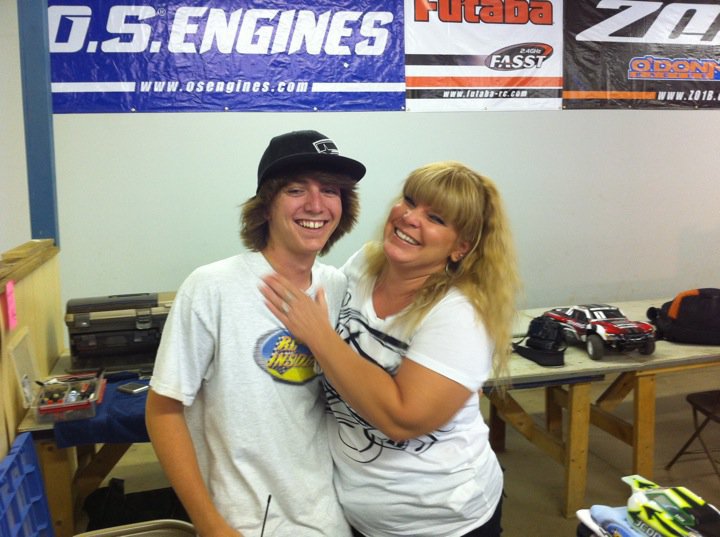 Photo: Jason Ruona, via Facebook
AW: Who are some of the people that have helped you the most?
ZR: Oh boy. First off, my parents, Scott and Judi from Banzai Motors, Jeremy Flint back in the day, Joe Pillars and Jared Tebo, Jason Ruona and Jason Snyder, Randy Rains, Joey Yantis, Wayne Ashmore, John Trino, David Mayhew, Jason Hastings, the Collins family…man, I feel like I am missing so many people, but those have been pretty big ones past and present, as well as ALL my friends in RC — especially those in the the local race scene, who have always had my back and supported me.
AW: Thanks for the interview! Is there anything else you’d like to add?
ZR: Just a big thank you to Aaron and the whole LiveRC crew for what you guys do for our industry. Thank you! 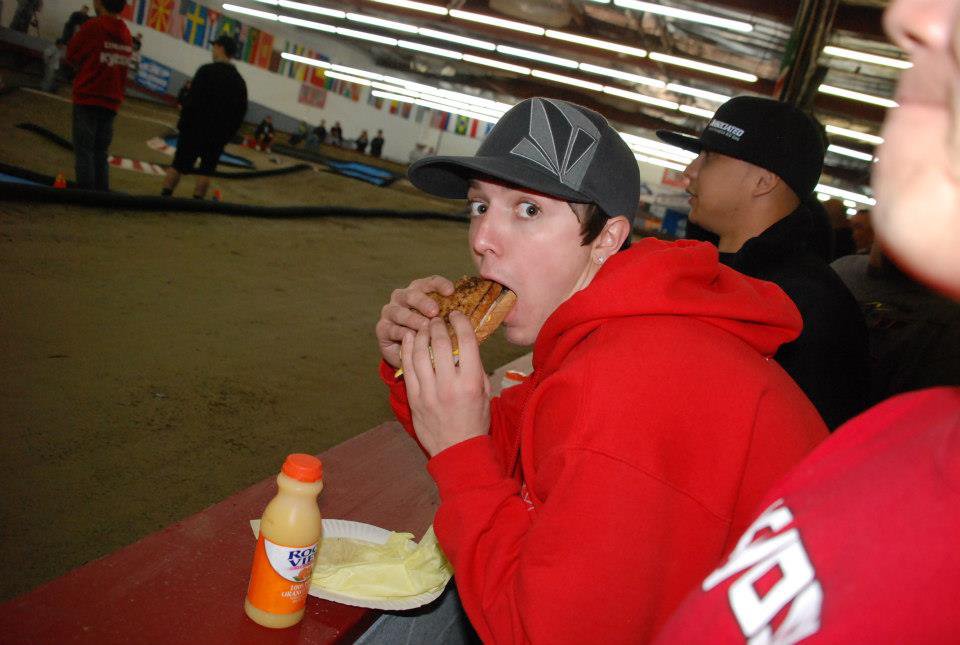