WHERE’S WALDO: Another one bites the dust 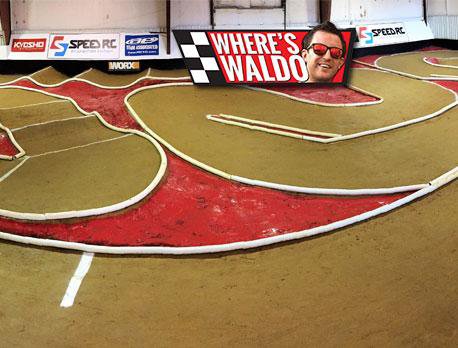 Earlier this week, news broke that Speed RC Raceway in Mooresville, NC — a popular indoor off-road track within the general area of motor sports hotbed of Charlotte — would not re-open after a planned move to a new location.
Speed RC was founded by Global Rallycross champion Scott Speed and stock car racer TJ Bell in November 2015. A hobby shop accompanied the clay track, which hosted marquee events like the JConcepts Indoor National Series finals and the King of the East, and the group opened an additional outdoor track in April 2016. Top racers like Jared Tebo and Cole Ogden served as ambassadors for the facility, which counted NASCAR Xfinity series champion William Byron among its dedicated local racers.
Speed and Bell announced on the track’s Facebook page their plans to open a new facility with a carpet off-road course on November 1, 2017 and, on February 5 of this year, stated that their previous landlord did not renew their lease. The track held its final race on February 16 and the course was cleared out of the building by the following week.
The track’s Facebook page made the announcement of its permanent closure on Monday afternoon, citing slow hobby shop sales due to a market saturated with driver sponsorships compounded by an increase in theft. An hour later, Speed’s wife, Amanda, replied to a comment on the post to explain that the building they were constructing for the new facility is set to be completed in late summer and will either be sold or rented out. She also said that Speed RC ownership was still in the process of working with the city of Mooresville to open an outdoor track on park property.
Even still, the story on both LiveRC’s Facebook and the track’s page triggered plenty of discussion. There were those who expressed their disappointment in losing the scene of precious memories, and complimenting the group on having created an enjoyable environment. On the uglier side, there were those who claimed to have seen it coming after the company began selling other track and office supplies and questioned whether there ever was an intention to re-open. While Charlotte-area racers will certainly miss out on the new carpet off-road track they may have been looking forward to at Speed RC 2.0, there’s another in King about 80 miles northeast.
Other conversation topics including the general health of the RC industry, the validity of the concerns outlined in Speed RC’s announcement, the business acumen of the Speed RC owners and those who’ve owned RC tracks that have failed, and more. Speed RC is certainly not the first track to close in the last 12 months; however, we still don’t have any data to ascertain whether or not these track closings are happening at a greater rate than they have at any other point in the last three decades, whether or not they’re outpacing the opening of new tracks, or being able to put these changes in the context of the greater economic developments at hand like land and building costs, and the socioeconomic factors affecting local populations.
Here’s what we do know for certain:
Which means that either, or both, of these are true:
And your view on any of the above probably puts you into one of two groups:
Naturally, there are examples of all extremes: tracks that function healthily without hobby shops, and those that have substantial retail sections; tracks that operate well as a club, follow the typical pay-to-play entry fee, or are supported primarily by paid memberships; tracks that serve a sizable population of sponsored drivers, and those that specifically cater to the average customer. While it’s certainly true that the pre-Internet business model of the hobby shop supporting the track may no longer apply, some tracks are heavily subsidized by over-the-counter and online sales and so to make blanket armchair-economist statements about the how’s and why’s that led to the industry losing a track seem shortsighted at best.
If the shuttering doors of Speed RC, and those of other tracks that have ceased operations over the last several years, are unconnected anomalies, then the social media spikes that have come afterward are a function of increased visibility and not necessarily any reason for alarm. If these are early signs of a trend, then we - and by “we” I mean the dedicated hobbyists who ultimately have the power — need to work on identifying what to do about it before presenting a unified message to the companies and sanctioning bodies rather than waiting for them to work together instead of gobbling up each other’s market share.
So which is it? Are we in trouble or not? And if so, what are we going to do about it?
Share:
blog comments powered by Disqus