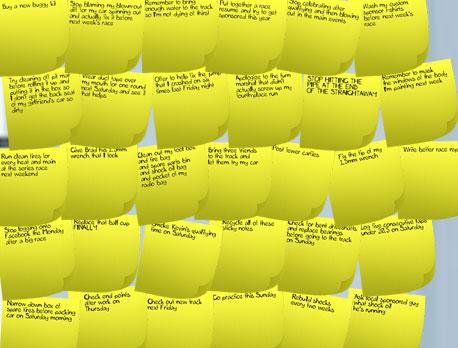 The practice of making a New Year’s resolution goes back thousands of years, starting with ancient Babylonians who made annual pledges of loyalty to the reigning king and promised the gods that they’d repay their debts. Modern-day resolutions typically involve some sort of personal improvement and growth, like exercising, improving one’s diet, quitting smoking, enrolling in continued education, pursing a promotion, or similar. A 2002 report published in the Journal of Clinical Psychology (read here) stated that 46% of those who made one of these common New Year’s resolutions were likely to succeed - more than ten times greater than those who made similar decisions during other times of the year.

“Silly season” announcements of drivers and team managers switching squads dominates our news feed during the winter offseason, but for the vast majority of RC racers - the full-retail-paying privateers - the turn of the year is a chance to reboot one’s racing program and reaffirm what keeps you coming back to the track. Once you’ve decided whether you’ve got your sights set on the IFMAR Worlds, or simply getting more enjoyment out of your favorite weekend hobby, it’s time to make one or more of these changes to make the most of your time at the track.

Don’t wait until the hours before practice at a major event, or the minutes until the first round of a club race, to rebuild shocks and differentials, glue tires, or replace broken parts. Even if you’ve been comfortable driving your car for weeks, you might be surprised to find blown-out bearings, clapped-out suspension components, leaky o-rings, dragging clutch shoes, and misaligned axles that are holding you back. If you’ve decided not to smear shock oil across the dining room table anymore, and would rather keep your RC tools packed while at home, that’s fine — but there’s no better way to get a race day off to a bad start than by thrashing to make sure your buggy won’t fall apart during the first qualifier when your competitors are getting a few practice laps, a bite to eat, and a bigger smile on their faces. Even the casual weekend warrior will have more fun with a vehicle that works properly.

Now that you’ve decided to keep your car in top shape, it’s time to give your driving a tune-up. Try to log two minutes of practice time for every minute of racing - so if you’re going to get a couple of five-minute qualifying rounds and a five-minute main event on Saturday, plan on a half hour of practice on Sunday. Focus on making fewer mistakes and turning consistent lap times, and your speed will have improve along with it. If you haven’t hit the track on an off-day for some pressure-free practice in a while, you may be surprised at how much fun you’ll have driving your RC car without worrying about where you stack up against your competitors.

Routines are comfortable, even (and especially) when it’s something that you do for enjoyment. Refresh your excitement level for RC racing by maintaining a list of goals to meet this season and checking them off when you achieve each one. It can be as simple as racing once a month, or as tough as making the A-Main at the end-of-summer trophy race at that awesome track in a neighboring state. Maintain a maintenance schedule, keep track of lap time improvement, and track your results over the course of the year. Use this goal checklist to keep your new wrenching, practicing and racing habits organized, and push yourself to reach new heights.

With top pros like Adam Drake and world champion David Ronnefalk recording YouTube videos that describe setup options and maintenance rituals, today’s RC racers have more resources than ever to become better drivers and mechanics. When you’re at the track, ask the local hotshot for driving pointers and find out what he’s doing to get his tires to work better. Start pitting next to the driver that beats you every week, and pick his brain to find out where he’s finding that two-tenths per lap that leaves him five seconds ahead by the end of the race. Read, and re-read, the setup suggestions in your car’s manual and try making each adjustment on practice days, then record the effects in a notebook that you can reference the next time you find your car lacking steering or grip. Don’t settle for a day at the track that doesn’t include picking up some new information.

If you’ve been racing the same car in the same class at the same track every week for three years, it’s time to try something new. Turn up the boost on your speed control, or bolt in a 13.5, and give the Modified class a try for a month. Ask a friend to switch cars for a night and learn how to drive something different. If you’re a diehard off-roader that can’t imagine why anyone would ever race on asphalt or carpet, go to your nearby on-road track and watch - or even take someone’s touring car for a spin. Travel to a new track and get your doors blown off by the locals (or perhaps surprise a few people!). If you’ve been a hardcore brand loyalist for a decade, consider a new kit for this season and at least talk to representatives and privateers driving different vehicles. Try a new paint job, spot on the drivers’ stand, wheel color, traction additive, set of tools, pit light, or pre-race ritual. There are simply too many different products, tracks, and drivers in this industry to ever fall into a rut.

Resist the urge to drop that sick burn on someone’s Facebook feed - especially if it’s not actually funny, and will just make you look like a hater with a personal vendetta. Have face-to-face conversations with those you may not agree with, or at least hash out differences in private messages rather than public posts and live rant sessions. Walk up on the drivers’ stand with the understanding that you may not understand what’s going on in that turn marshal’s mind, or why the racer next to you is already having a rough day. Rather than complaining that the track isn’t swept before qualifying, grab a few friends and an equal number of brooms. Pinpoint why you’re not having the absolute most fun you could possibly have with the hundreds (or thousands) of dollars you’ve spent on racing these toy cars, and address each line item until 2018 is the best time you’ve ever had with a transmitter in your hand.