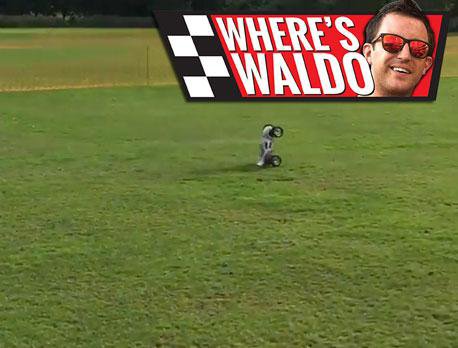 It has been more than a decade since I stepped away from seriously racing RC cars for a full-time media job. I had started racing in elementary school, and although I had burned thousands of laps on backyard tracks the primary goal was always to improve my skills, become a sponsored pro and compete with the names I saw in magazines (and later on websites). Though I had been competing for over ten years by that point, all but two of the cars I had were from the same company.
On my first day, my boss handed me the most ridiculous vehicle in the office: a 1/10-scale 2WD truck with a .18 nitro engine and 1/8-scale buggy tires. Hidden underneath its screened, window-less body were exaggeratedly laid-down shocks, a two-speed transmission, and a pull-starter. He told me that I needed to reconnect with the common RC hobbyist who picks up the transmitter to have fun and escape the stresses of everyday life.
As much as I didn’t want to admit it, that was exactly the reason I had taken my RC career in a different direction. I know it sounds like a case of #firstworldproblems, those “stresses of everyday life” had become the anxiety of major upcoming races, feeling personally responsible when my teammates didn’t win (even if I had achieved a personal-best finish), worrying about whether or not I was good enough to support myself through my involvement with RC racing, and — frankly — whether or not it was all worth it. I was fortunate enough to have an alternative option.
But I still couldn’t look at that truck without scoffing. I had never owned an RC car that wasn’t intended for a particularly recognized class of racing. I knew in my heart that, with its bargain-bin servos and mini-pin tires made of basketball rubber, it was going to drive as well as a shopping cart with a bent frame, blown bearing and broken caster.
As it turned out, that was part of the charm. In less than one tank of fuel I had an ear-to-ear grin on my face, and was feverishly searching for the next obstacle to conquer.
On the racetrack, all but the most seasoned electric off-road racers find their vehicles easier to drive, and thus capable of faster and more consistent lap times, when not overpowered for the size and surface of the racetrack. Excess, though, is the very spirit of recreational RC and as such this truck was fitted with the engine and tall gearing needed to be able to advertise a top speed of 50 mph — which sounds even more impressive when written as “80 kph.” We never got our test vehicle close to that mark, but it was still fast enough to add an element of fear to a full-throttle pass over a rutted construction site when you’re trying to get close to a camera held by a human. I did break the truck eventually, but only because I tried to drive it around the inside of a narrow section of concrete pipe and it came flying out — again, in the direction of the lensman.
The following month I did the same thing, only this time with a 14-pound monster truck that was just as fast. Sometimes I played with rock crawlers, other times with on-road vehicles of all speeds and sizes. With the occasional exception for issues in which I reviewed racing kits, this cycle repeated every month for three years - and then, after an 18-month hiatus, another two years. Each time, I called upon the skills I had acquired as a racer: how to build, repair and adjust vehicles to work their best; pushing RC cars and trucks to their limits to assess their performance; and driving the same lines repeatedly, not for the fastest lap times but to make the photographer’s job easier. Just because the tires may not have always worked well, or that the servos may not have always been the strongest, didn’t mean I didn’t need to hit my marks or that my ability to control RC cars didn’t apply, it’s just that the challenge was different. Even if you’re not driving for a camera, you still have to be able to line up to hit a BMX ramp, adjust a vehicle’s attitude in the air for a controlled landing, or react quickly as not to crash into a tree, curb, light post, other vehicle, or person. No matter the vehicle, whether it's a drift car or monster truck or rock crawler or even a boat, the difference between driving it and driving it well comes down to experience.
I quickly learned that it wasn’t necessarily the end result, be it the sponsorships or the race wins or the acclaim, that made RC enjoyable for me; instead, it was the ebbs and flows of the learning curve associated with each new vehicle. Of course, it isn’t really reasonable for most RC hobbyists to acquire a new vehicle each month and then dedicate dozens of hours to it over the next 30 days. I still raced once or twice a week for several years after returning to my radio-controlled roots, but the experience did lend me some insight into why I enjoyed certain parts of RC racing, and why other aspects were frustrating.
Share:
blog comments powered by Disqus