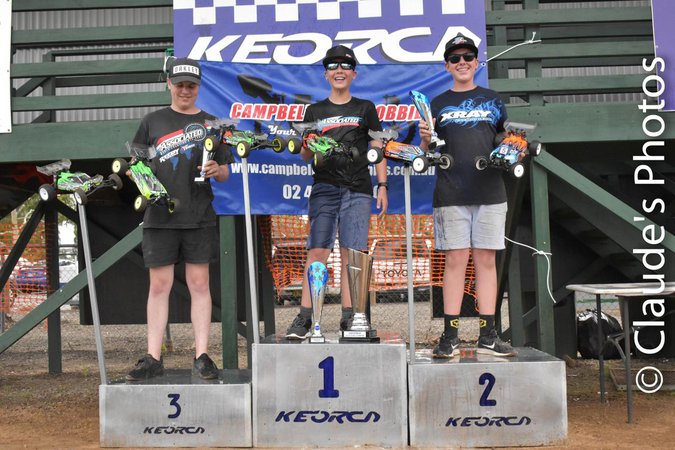 Lachlan Munday (Modified) and Andrew Selvaggi (Stock) have taken out the Invitational classes at the 2020 Keilor Invitational Brought to you by Campbelltown Hobbies. Australia’s version of the Reedy Race, this event is held on an outdoors dirt track in the Australian summer with the Invite classes running 5 heats of 2wd and 5 heats of 4wd in addition to open classes for both modified and stock, with the winner of these getting a direct invite to the 2021 event.

For the 2020 event just under 130 entries were received from all around Australia, with the big talking point being the new track surface which had been treated with Canola oil dramatically reducing dust and tyre wear and proving a big hit with all racers. The layout had been changed since the 2019 Nationals held at the same track with a combination of sweeping and technical sections with large elevations and jumps challenging all levels.

The 2wd day began with Lachlan Munday (AE) getting out of the blocks quickly, taking 2 heat wins and 2 2nd places in the first 4 races to end the day on top with 6 points.  Jordan Isergin (Xray)  finished the day 2nd with a heat win 10 points from defending champ Ray Munday (AE) on 11 points and Jack McMillan (AE) 4th.  The 4wd day started off with Jack McMillan firing taking the first 2 heats after tough battles with Lachlan Munday and Isergin, then Isergin taking a heat and Jarod Ment also taking a heat.  The final result came down to the last lap of the final race, Isergin taking the heat but Lachlan Munday was able to claim the overall win by 1 point from Isergin and McMillan 3rd.  Reflecting the strength of the junior development scene in Australia, the podium average age was only 16 years old with Lachlan (14) , Jordan (15) and Jack (19) all showing the older racers a clean pair of heels!

The 2wd portion saw previous Invitational winner and 2018 national champ Leigh Cheeseman (TLR) take the first 2 heats before 2019 national champ Andrew Selvaggi (AE) got into his rhythm taking 3 in a row to end the day 2 points up from Leigh and Ben Howard (AE) another 5 points back.  4wd day and Paul #oldguysrule Mason (AE) took the first heat before Selvaggi again took a three-peat of wins to seal the result with a round to go.  Mason and Miller (XRay) tied for 2nd in 4wd but with the total points combined it was Selvaggi with the win and his first Invitational title, Cheeseman second and Ben Howard third.

With a place in the 2021 Invite up for grabs, it was Simon Healy (XRay) dominating qualifying taking all 3 rounds to seal TQ for the single 7 minute final from Queensland hotshot Troy Milton (AE), ‘Little Man’ Camden Camilleri (AE) 3rd and Jon Philpott (XRay) 4th.  From the tone Healy set off into the sunset and built up a strong lead before disaster struck just before the 5 minute mark, stripping a gear and having to retire.  This promoted the battling Milton and Camilleri to the lead, with Camden showing maturity beyond his 10 years of age to drive smoothly to the finish and take out his first win in modified, a very popular victory and a place in the 2021 Invitational!  Milton finished a close second and Philpott only a few seconds back in 3rd to complete the podium with 14yo Nathan Healy a well deserved 4th .

Keen to make amends for his loss in 2wd, Simon Healy again dominated qualifying with a clean sweep of the 3 rounds to take TQ from XRay teammate Jon Philpott, son Nathan Healy a fine 3rd and Nathan ‘NathoBuilds’ Facciol 4th with his AE.  In the final Healy got off to a strong start and took a tone to tone victory, finishing 15s clear of Philpott in 2nd with club president Jay Bloss (AE) taking the final position on the podium after a last lap battle with Nathan Healy and Shelby Bloss moving from 10th grid position to finish 5th overall.

The final started with Sola off to a clear start with McHugh chasing, but as the race continued Michael Snedden (AE) who had missed practice completely due to a delayed flight started to catch Sola and with half a dozen laps to go took the lead from Sola.  The last few laps were epic with Sola then managing to re-pass Snedden with 2 laps to go and go on to take the win, Snedden 2nd and McHugh 3rd.

After getting practice in during the 2wd day, Snedden (AE)  came out swinging on 4wd day taking all 3 qualifiers for TQ from Tommy Jett (HB) and Glenn ‘Grub” Grinter (AE).  A nervous start to the final for Snedden saw him drop the lead to Chris Jordan (XRay) who had come through from 4th on the grid.  6 laps in Snedden overtook Jordan for the lead and didn’t look back, locking in his place in the 2021 event with a 5s win over Jordan and Michael Bruce (AE) coming from 7th on the grid to complete the podium!

Junior racing is very strong in Australia and for this event 10 juniors (under 16yo) lined up to battle for the title.  Travelling from Tasmania, Zackary Scott (Xray) took out round 1 before local Kane Schembri (Xray) took rounds 2 and 3 for TQ from Scott with younger brother Sash Schembri (Xray) qualifying 3rd from Angus Browne and Kohen Mould.

The final was a great battle between Zachary and Kane, with Kane dropping back early before fighting back to get the lead, then Zachary re-claimed the lead with 2 minutes to go.  Zach held on to take the title to Tasmania from the two Schembri brothers, giving Xray a podium sweep from Brown and Mould.

Full race results can be found at: http://keiloroffroadcarassociation.liverc.com/results/

Massive thanks to all the racers who attended the event from around the country, the club committee for putting on the event, and Campbelltown Hobbies and Plaig Bearings for their support of the event.  Thanks to ‘Claude’s Photos’ for the pictures.

Plans are already underway for the 2021 Invitational, so see you there! 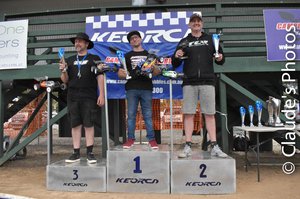 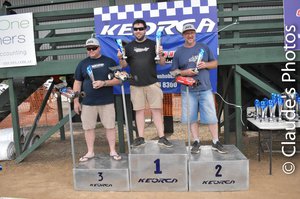 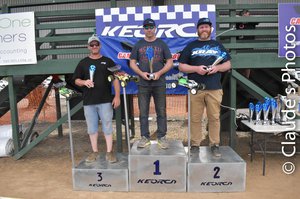 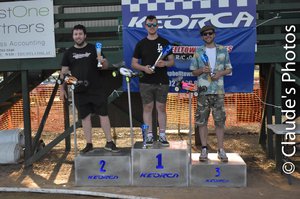 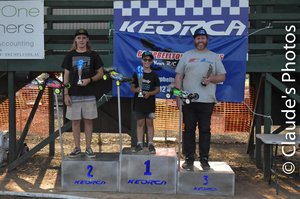 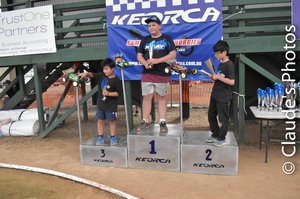