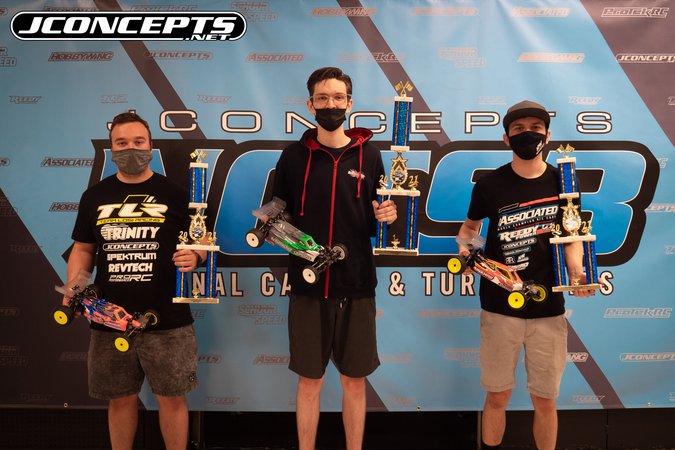 After two consecutive weekends of racing we’re back at the JConcepts HQ! We kicked off two weeks of travel in Tennessee at the Psycho Nitro Blast where we watched intense 1:8 Nitro battles go down. This past weekend The JConcepts Team flew out to Albany, Oregon to mix things up with 1:10 carpet racing. The 2021 JConcepts Northwest Carpet Nationals was hosted by the appropriately named Northwest Hobbies!

They moved in to a huge new facility this year that spans about 96,000 sq ft and located inside the local mall. Their new spot provides a variety of experiences and they still have new projects under wraps. You’ll definitely want to add this place to your RC bucket list! The facility features a few carpet tracks, a drifting area, arcade, a fully stocked hobby shop, drag racing, 1:10 & 1:24 scale crawling courses, on road racing, Tamiya mini 4wd track, SC28 track, H.O. slot cars, and more coming down the pipeline.

The spec tires the weekend were the JConcepts Nessi and Swaggers. Tire wear was relatively low all weekend as drivers felt like they could get several runs out of each set. A fresh track layout went in Thursday evening so drivers came into a new challenge on Friday morning. The track essentially started with a straightaway into a sweeper, into a double around to the triple, into a 180, and into the final crooked double and back to the straightaway.

A1: Ryan Reavis made his move up to the 2nd place spot within the first lap. Rivkin and Phend were right there behind Reavis. Meanwhile, Champlin was trying to lengthen his lead. Phend and Champlin had been battling all weekend long and this race was no exception. Reavis made his way up to Phend as they were now battling over that center double for 2nd place. Over the triple Reavis and Phend both had a bobble. Phend took over 2nd, Rivkin moved up into the 3rd, and Reavis dropped to the 4. They were battling each other while simultaneously working together in order to close the gap on Champlin. Phend goes sub 12 four times in the last several laps, he was trying to reel in Champlin. His fastest lap was an impressive 11.88.

A2: Once again it was Champlin and Phend out front. It was a clean race from the start. Champlin had a 1.3 second lead with 3:30 to go. Champlin had a small bobble over the skipper before the straightaway allowing Phend and Reavis to close the gap.  Less than 2 minutes to go Phend was on Champlin’s wing. Time was ticking, he was looking for a way to pass, and with 1:30 to go Phend had a tragic break. The top 3 were now Champlin, Reavis, and Devoll. It was a battle for second between Reavis and Devoll. Devoll shorted the double in the final seconds allowing Reavis to take 2nd.

A3: Champlin already secured the win, this would determine who would take those final two spots on the podium. It was running Phend, Reavis, and DeVoll as the top 3. Reavis and Devoll were battling it out, they were separated by less than 1 second. They came through the sweeper, trying to avoid another car on it’s lid. Reavis was trying to maintain his lead. Devoll got on his lid, the marshall saved him quickly and he was back to it. There was only 30 seconds left, everyone was surging trying to maintain or gain positions. It finished, Phend, Reavis, and Devoll.

A1: Champlin and Phend quickly stared to pull away. Rivkin and Yoshii were battling in that 3rd position. Phend was peering around Champlin, looking for a clean pass. They were too close for comfort. They were pushing hard, Phend got inside the pipe over the skipper on the back left corner of the track. Moments later Champlin had a bobble in the sweeper. Moving this quick, driving this close, it was quite the feat to keep it perfect. The top 3 were all close together now, Rivkin surging in 3rd. Rivkin was keeping a close but safe distance in case there aas a mistake by 1st and 2nd. Yoshii moved up into 3rd in the final moments. Champlin finished with a 5.6 second lead.

A2: The A2 is always an interesting race, as it can either secure a win or mix things up a bit. It was a clean start. Phend quickly pressed in and put the pressure on Broc. Down the straightaway after a 1.5 minutes elapsed Phend had a bobble. Phend was not allowing that to determine the race as he quickly got on it. Phend closed the gap on Champlin, meanwhile Foote and Rivkin were battling for 3rd. Into the 180 before the center double Champlin rolled over and Phend whipped by. Champlin was now chasing Phend, things were mixing up! Phend took the win that round with his fast lap being 11.93.

A3: This would be the race that determined who would take the ultimate win! Yoshii made a small mistake early on falling back to 6th but he had the fire in his driving to move back up the ranks all the way to the podium. Champlin, Phend, and Rivkin were all together as they moved through the back triple. Foote moved up into 3rd, meanwhile Phend was looking for a way around Champlin. Phend and Champlin were working through traffic beautifully while maintaining their close distance. Phend tried to peek around Champlin through the 180 but he couldn’t quite make the pass, so they were still neck and neck. Phend was looking for anyway possible around Champlin to make a clean pass. He clipped the pipe a bit allowing Champlin to make up a little time. Phend was closing the gap, the race was not over yet. Time expired, Champlin took the win.

The weekend was surely a blast, and we saw a lot of performances our drivers should be proud of. Jovy Levin had an awesome weekend as we saw him win both 13.5 Stadium Truck and 13.5 4wd Buggy. He also took 3rd in 17.5 2wd Buggy. He’s definitely an up and coming racer to keep your eye on. Another fast driver we’ve been watching and actually recently wrote an article on after the Western Carpet Nationals was Davey Batta. Batta won 17.5 2wd Buggy this past weekend. There were also a host of other great runs from our drivers and we look forward to racing together again soon! We’re transitioning back to dirt as we go to SS Hobbies and Raceway for the JConcepts INS Series in Tampa, Fl! 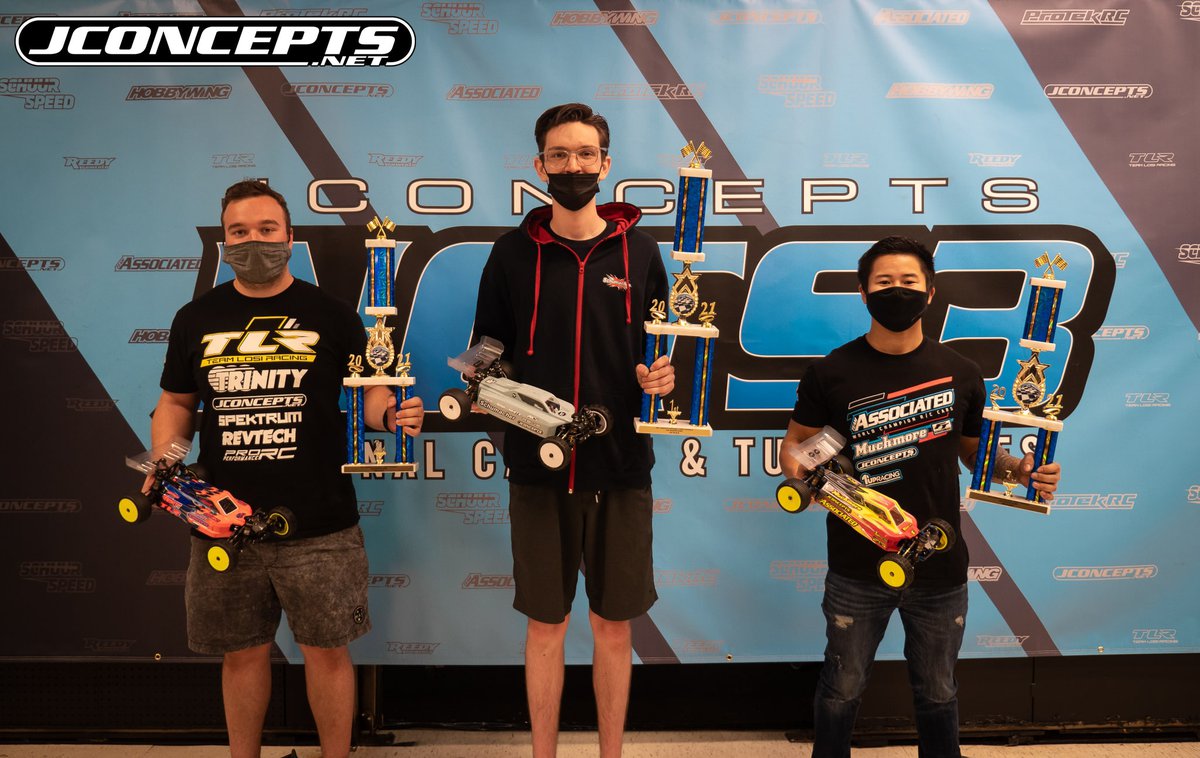 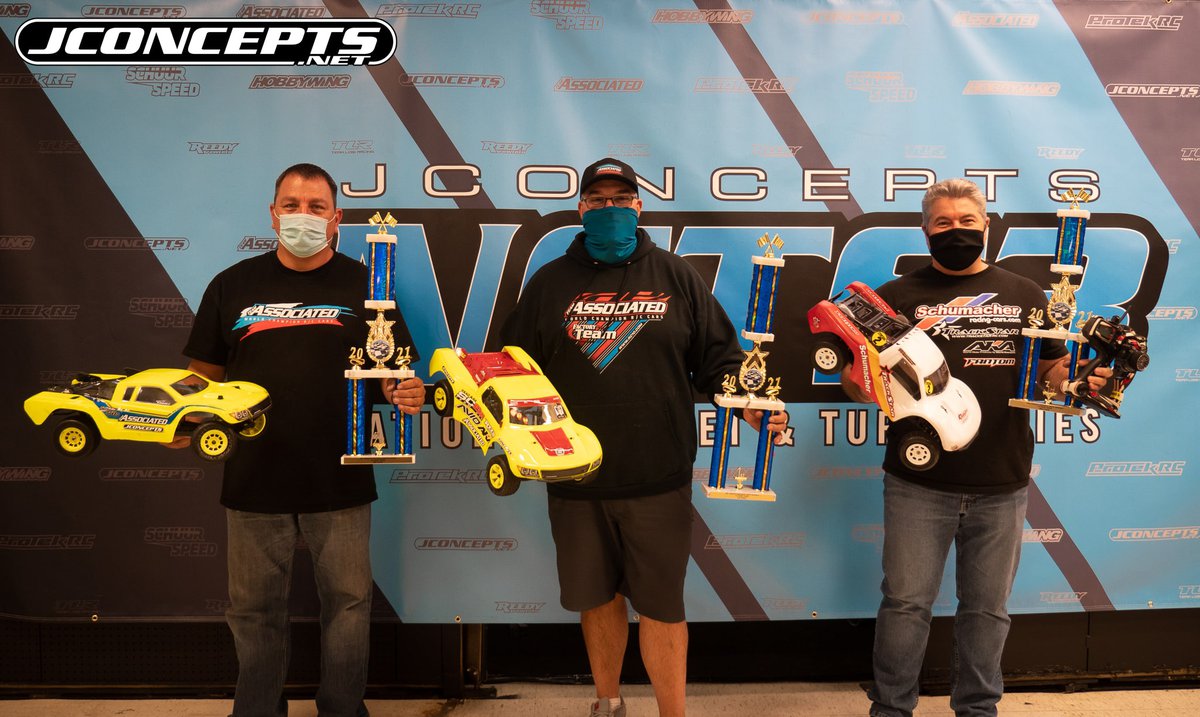 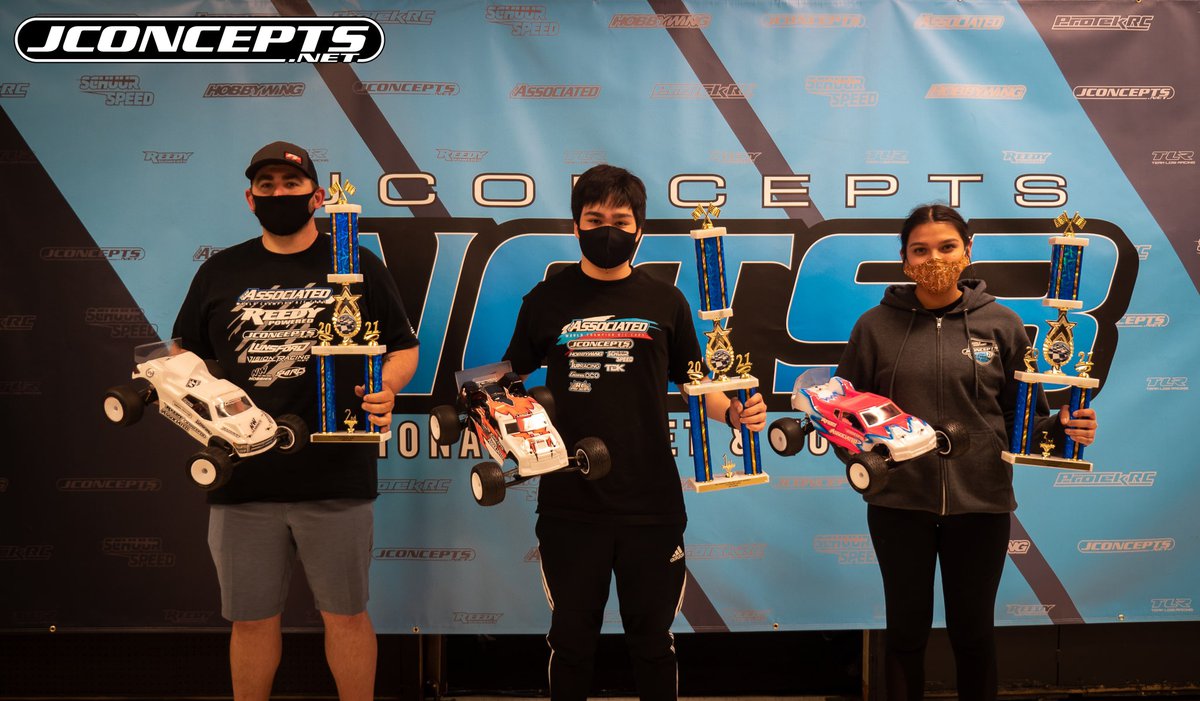 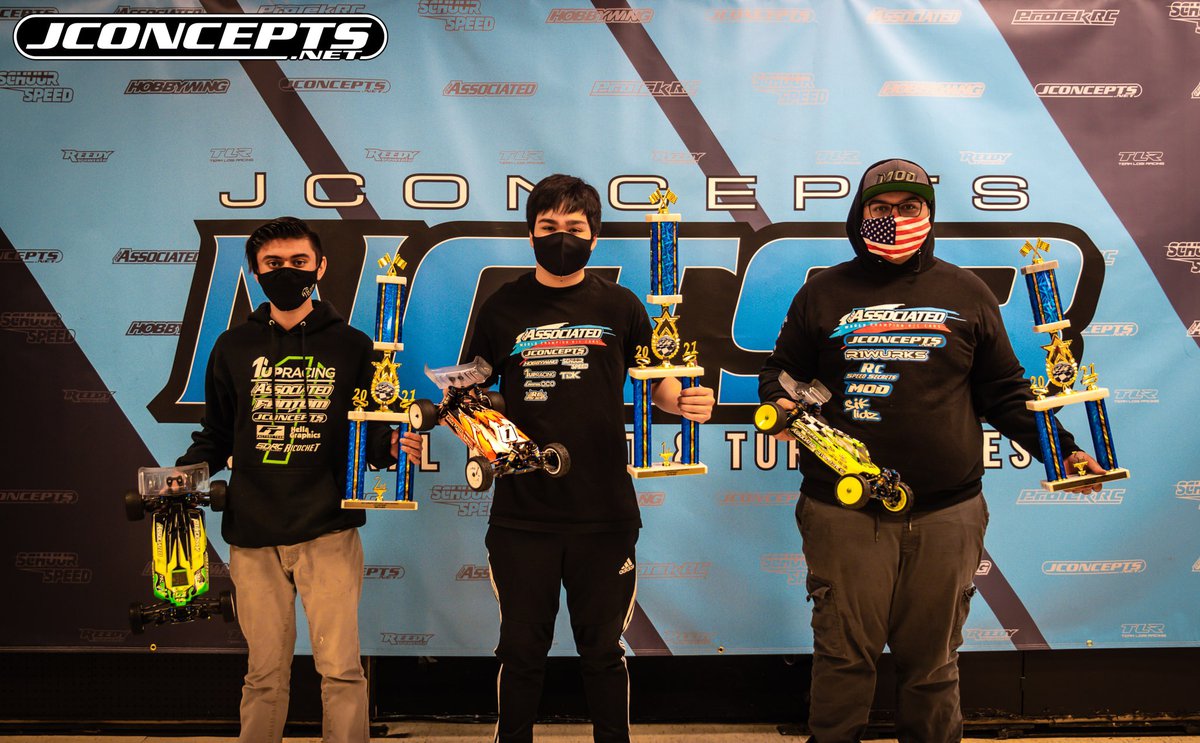 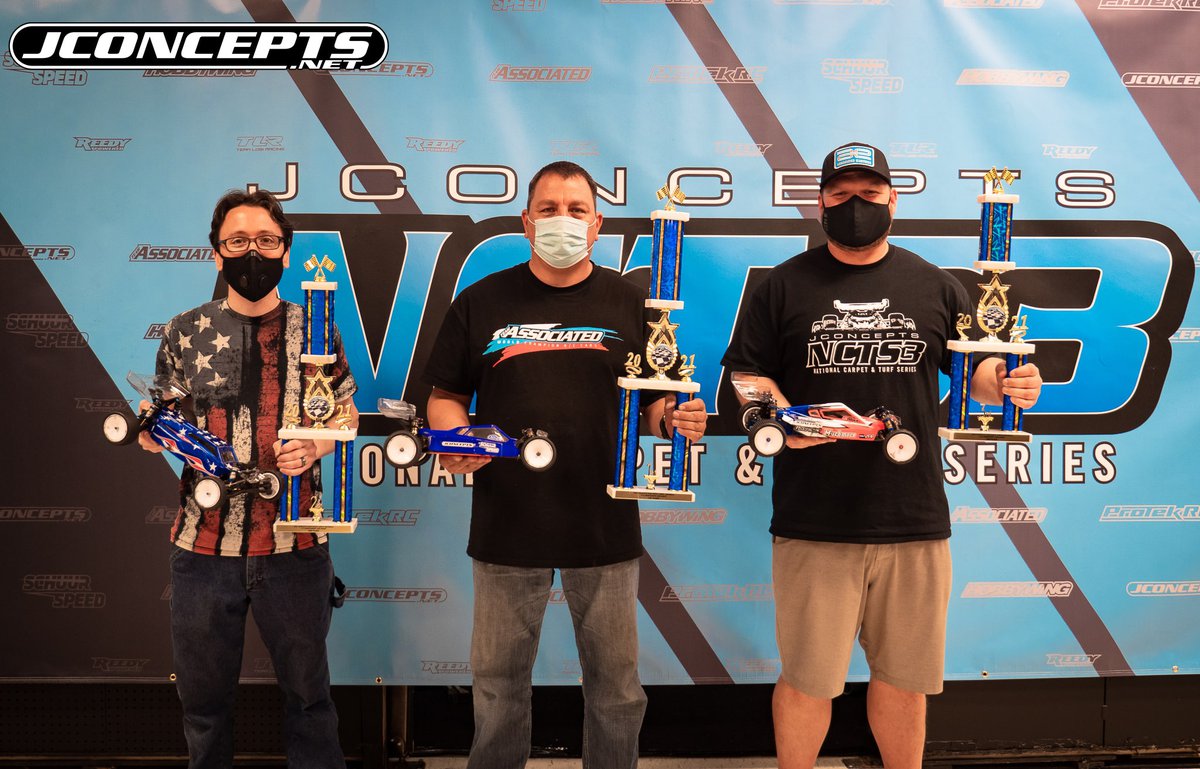 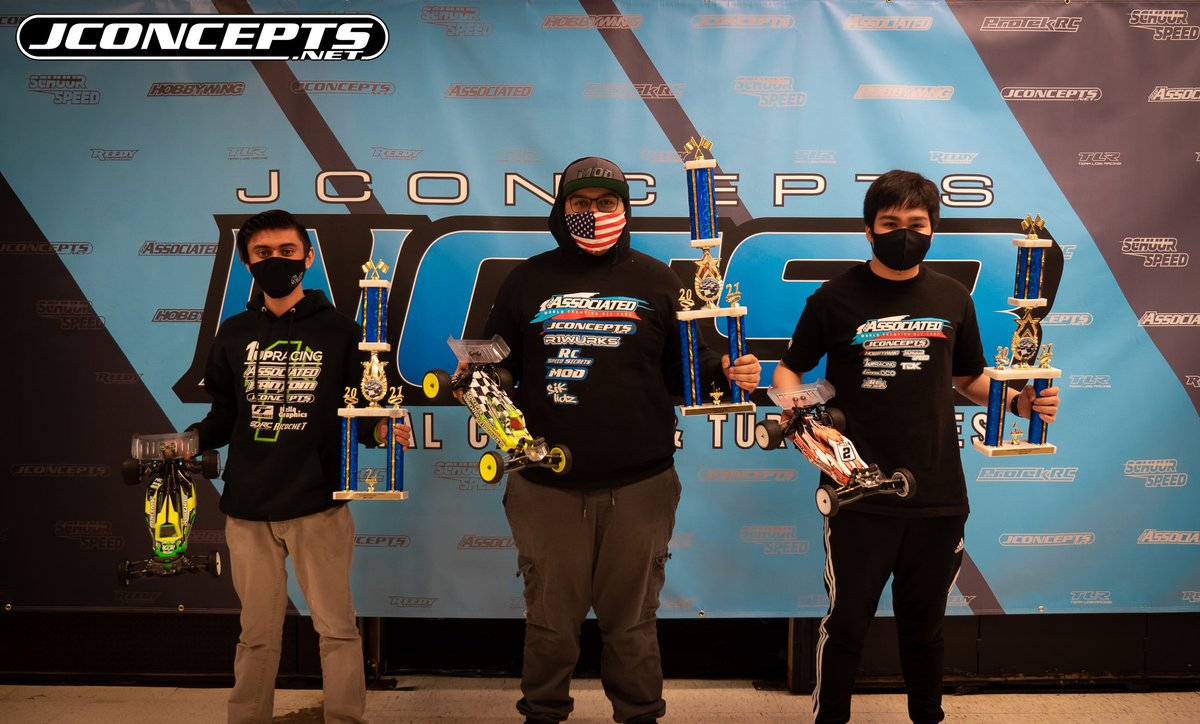 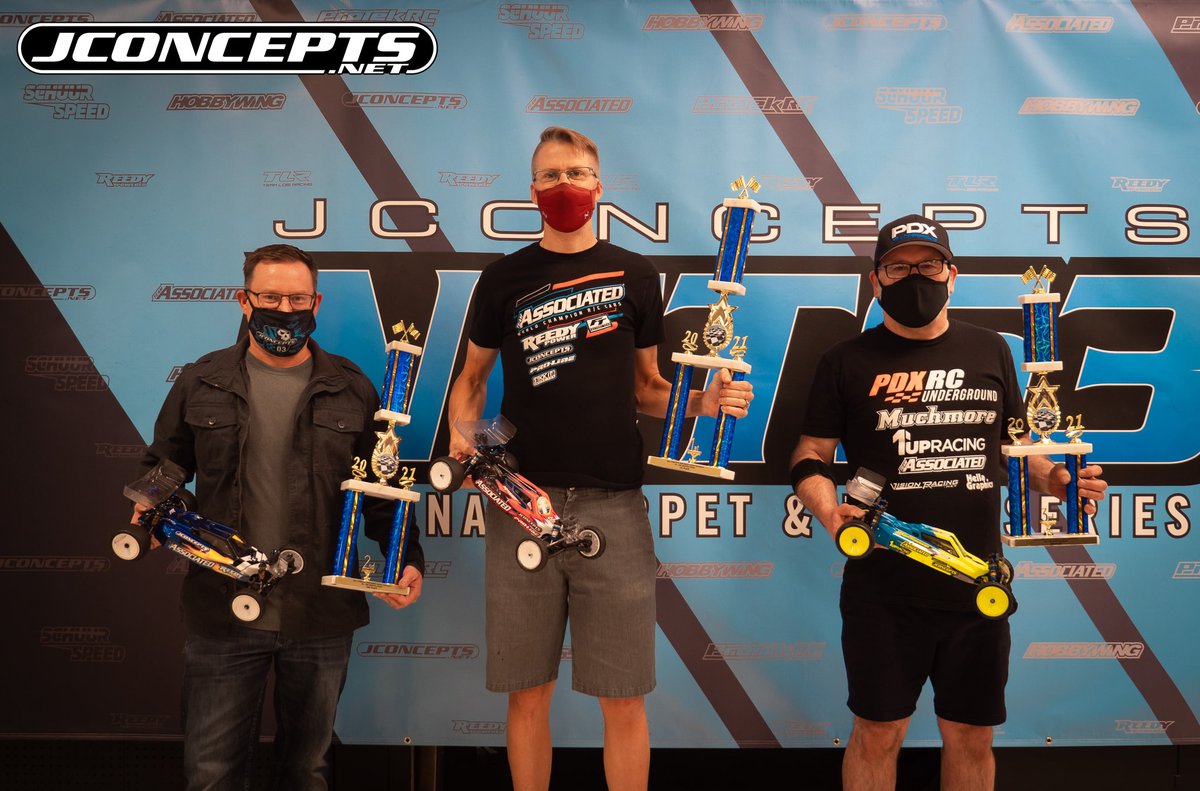