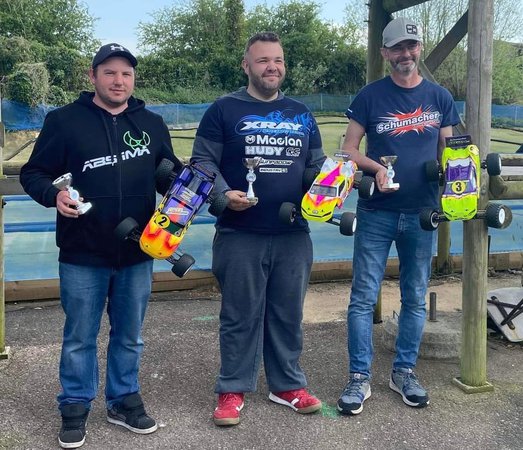 The 2022 BRCA Truck nationals started this past weekend at Mendip down in the South West of the UK. It was my first visit to the fully AstroTurf track and though it’s quite small, the track is very bumpy with a lot of off camber sections which really test the setup. The grip level was quite low all day with a lot of sand mixed into the surface.

I didn’t go to the open practice day on the Saturday, but arrived early on the Sunday for the one hour open practice session. I started out with a setup I’d used at a couple of local tracks back home but the grip was much lower here and I was struggling to learn the track as the truck was pretty hard to drive. I made a few changes but didn’t do too much as I wanted to get back out to run laps and try different front tyres to find the right balance. After 2 long runs on track I decided on a tyre, but wasn’t sure my setup was quite right. The air temperature was rising though so I decided to see how it was in the first qualifier.

I was running quite a stiff shock setup and by the time we got to qualifying I could tell immediately it was too firm and I was really struggling to pick my lines - I had a lot of understeer and the car was bouncing around a lot. I was able to keep it clean and thanks to some errors from others was able to take the first round TQ. I got back to the pits and softened off the truck, lowered the ride height and widened the rear track width. From then the truck was much easier to drive and I could run consistently each round, taking TQ with an improved time each run. In the last qualifier I decided to move my battery forward to give a little extra front grip and decided to go with this setting for the finals.

At the truck nationals there are 3-legged finals for every final so there was quite a delay before I was back on track. By the time we got to the first A final, the temperature was starting to drop and a lot more sand appeared. I got off to a clean start in leg one but the track felt so different I just concentrated on not making errors. It was a close one but I held on for the win. I made no changes for leg 2 but decided to just try and drive it a bit more like a qualifier and push harder. This paid off as I was able to pull a big gap on the field and take the win to win the meeting overall. For the last final I made a small change to the front wheelbase and was pretty happy with how it felt, winning the leg with the fastest time of the 3. It was also a 1-2 for XRAY with Ed Kerry finishing 2nd overall!

I really enjoyed my first truck national and I’m looking forward to completing the series. My Maclan powered XT2 was a lot of fun to drive and I was really pleased how well it responded to the changes I made for the challenging track.