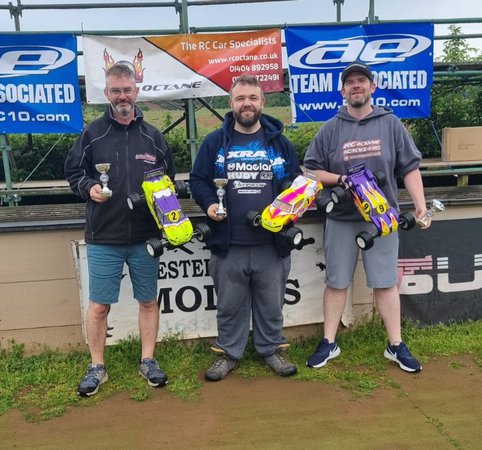 Last Sunday was the 2nd round of the BRCA truck nationals held at Ledbury. The Ledbury track is a 1/8thscale Astro track, but the club had made a few alterations from the usual layout to shorten it for the trucks – a fast last lap was still over 35 seconds however, even in the dry! The weather forecast for the day was very poor, with rain expected for most of the day, however when I arrived on Sunday it was nice to see blue skies and sun. The hope was this would last for the day… it didn’t!

First up was open practice. The track had been open for practice on the Saturday but I was unable to attend. My first laps on the track were shakey, I struggled to time the big jumps and was finding a real mix of grip. The track is astro turf but there is a mix of different kinds, meaning in some areas of the track the grip was high, while in others it was very low! The track was still damp, so I decided to leave my truck as it was, concentrate on working out my lines and see how qualifying went.

By the time the first qualifier was up, the track was 90% dry, so I decided to go with minipin tyres, which the locals said were the best choice. I had never used them before on my truck but matched them with my JConcepts swagger fronts and hit the track. Traction was better than practice and the jumps were much easier now. I had a touch of understeer but the truck was easy to drive and I managed a clean 5 minute run to take the first round. My lap times weren’t the quickest and the guys who had been there the day before were looking much more confident out there, but I was consistent which paid off.

Round 2 and there was rain in the air, I decided to make a couple of changes to get a little more steering but they didn’t really work as I had to switch to wet tyres for the run which were more aggressive on turn in. The truck was hard to drive and I couldn’t land well on the large double in the centre of the track. I managed to avoid making errors but wasn’t quick enough this time and had to settle for 2nd. For round 3 the track was drier again and I decided to use the Vee-2 rear tyre instead of the pin which I had much more experience of, plus I reverted back to the shock set up I had used at the previous round at Mendip – I had used thicker oils here but it wasn’t working, so reduced them down again. This time the truck was better but I didn’t choose the right tyre, I could see now that the pin was much faster than the vee-2. Thankfully I drove a clean run and set TQ with a new fastest time, but it was close!

For the last qualifier I put the pins back on and made a shock position change on the front. Just as we entered the drivers stand for our heat, the rain came. Sadly this put pay to a good score this round but it meant I was guaranteed overall TQ and gave chance to practice for what would likely be wet finals. Even with the pin tyre on my truck felt really good on the slimy surface – I won the heat by a big margin and managed to go 5th for the round even though the track was some 3-4 secs a lap slower than the previous heats. I now felt more confident with the truck and the track heading into the finals.

The final is 3-legged format. Leg 1 went perfectly – with conditions similar to round 4 but with wet tyres fitted, the truck felt great and I was able to pull a good gap on the field to take the win. Leg 2 however wouldn’t be so easy – the rain had increased in intensity and now the track was very wet and traction was minimal. I started well, but after 2 laps the timing loop had an issue and we had to re-start the race. In the re-start I just didn’t get off the line well and a scrappy first lap meant I was under pressure from the off. The track was so difficult now, it had become about keeping the truck in a straight line as much as possible. Trucks behind had different wet tyres to me and they were much more comfortable. Thankfully, on such a big track, there was only 8 laps to complete and I managed to stay ahead and take the win to win the overall meeting. 2 wins from 2 events in the championship – phew!

For leg 3 the track was cold and wet and I thought about sitting it out – but with no standing water on track I decided to go out and race. With no pressure now I pushed on from the off and hit an awesome first lap, pulling almost 2 seconds clear of the field. However, at the start of lap 2 I would push too hard and spin, getting stuck on a pipe and losing all that advantage. Despite dropping to 2nd I was able to make a pass a couple of laps later to retake the lead where I would stay until the end, but there were some really fast trucks out there – I need to carry some silver minispikes with me for future wet rounds I think!

Thanks to the Ledbury club for holding the event – next round of the championship is at a brand new track – Durham, in the north east of the UK. Looking forward to it!