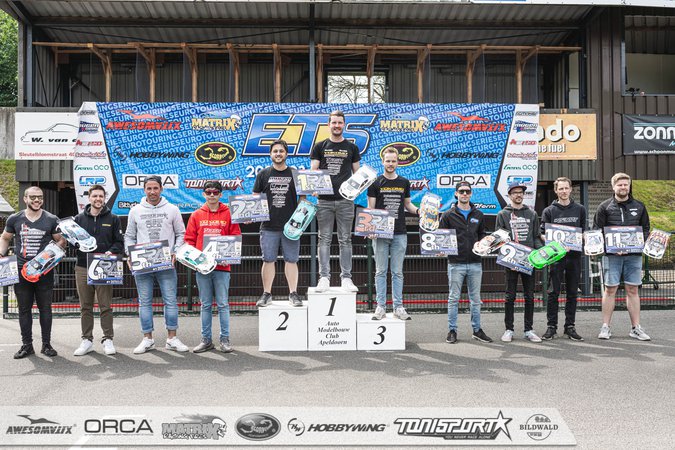 Check out the results report from the first round of the 2022 ETS On-Road Series held at Apeldoorn.

Modified racing is a class act – shown by some of the best drivers on the planet here in Apeldoorn. Ronald Völker (Mugen Seiki) took the win in the first A-Main after leading from tone to tone. A clean drive from the reigning Modified champion, with some carnage happening behind him. Yokomo`s Yannic Prümper had a technical issue and collided unintentionally with the Awesomatix A800MMX of Marc Rheinard – both had to retire from the race. After that, Christopher Krapp (Yokomo) and Michele Manzo (Awesomatix) took over second and third place. Meanwhile, Ronald Völker was leading to field to the finish line to win the first final. Behind Völker, Krapp, and Manzo, it was Yokomo driver Loic Jasmin and Lucas Urbain (Awesomatix A800MMX) finishing in the top 5.

If you like to watch one of the best Modified outdoor races since a longer time, just watch the video of the second A-Main again. Ronald Völker brought the field around the first corner with Yannic Prümper in toe. Directly after the timing loop, Yannic Prümper was able to make a spectacular move to overtake Völker with the crowd on the tribunes going crazy.

Völker was able to stay right on the tail of Prümper after the pass, and they drove around the AMCA track in a spectacular way for the next minutes. Völker build up huge pressure on Prümper and everybody expected to see another high class attempt form Völker and his Mugen Seiki car on Yannic Prümper`s Yokomo in the last laps. Both pushed their cars very hard and after Völker was sending his car over the curbing in the right section of the track in lap 20, the pressure on Prümper was gone and he took a well-deserved win with his new BD11. Ronald Völker crossed the line in second place with Nicholas Lee, Loic Jasmin and Marc Rheinard completing the top 5 in a spectacular Matrix Modified A-Main.

Prümper`s A2 runtime was a little faster compared to Völker`s A1 time and at the moment the advantage is on the side of Team Yokomo. We hope to see the third final happen tomorrow on a dry track here in the Netherlands.

The win was on the line between Yannic Prümper and top qualifier Ronald Völker in the last A-Main of the Matrix Modified class. At the start, Ronald was leading the race for the first lap until Yannic found a place to pass the Mugen Seiki in front of him with his Yokomo car. Ronald dropped back to fourth and was running behind Krapp, Rheinard, and race leader Prümper.

Ronald was able to find a way around the Yokomo of Christopher Krapp after the first minute and closed the gap to the second placed Awesomatix A800MMX of Marc Rheinard quickly. Closing a gap is one thing, but overtaking is the most difficult task in racing – especially in modified. Ronald was right on the rear of Reinhard’s car, and we saw a great show of high class racing until Völker touched Rheinards car in the right section of the track in lap 20. Ronald`s race was done, and Rheinard was able to drive to the end with an inwards folded body shell. For sure this was not an intentional contact from Völker as he and Rheinard are knowing each other so well on track since more than a decade, but sometimes things like this are happening when it comes down to ultra close racing.

Christopher Krapp took advantage of that and finished second behind Yannic Prümper, who had a little bit of breathing room after the unlucky Rheinard/Völker accident. Yannic crossed the line in first place after the five-minute race and was celebrating his first ETS win since a long time. Ronald Völker still finished second for Mugen Seiki, and Christopher Krapp took the final spot on the podium for Yokmo. A great result, especially for the Yokomo team with their new BD11 car. With 4 cars in the top 6, Yokomo was the strongest brand in the Matrix Modified class here at ETS RD1 in Apeldoorn.

Tim Benson and Max Mächler are the winners of the first two Pro Stock finals here in Apeldoorn. Benson was able to benefit from a small mistake from Mächler in lap 8 of A1 and won the run ahead of Max in second and Olivier Bultynck in third place. Alex Kunkler finished fourth, and Rob Janssen had a strong drive from 8th to 5th in the first final.

The second A-Main was even more exciting to watch. Simon Lauter was chasing Mächler hard for the entire run, but he didn`t get any chance for a pass on Mächler. Benson was running in third spot and that was how they finished the second final. Lukas Ellerbrock came in fourth, and Rob Janssen drove from 8th to 5th for a second time in a row.

Max Mächler brought a very strong weekend to a perfect ending with a win in the third and last A-Main in Apeldoorn. He won A3 from pole position while Simon Lauter tried everything to come closer to Mächler. Tim Benson had a tough last final, but with his P1 and P2 from the first two rounds, he finished second overall behind race winner Mächler. Simon Lauter is third on the podium, while Olivier Bultynck and Alex Kunkler making it an all Awesomatix top 5. The A800MMX is the real Benchmark in the Pro Stock class at the moment.

A perfect weekend from Steven Olsen – he is the well-deserved winner of the Hobbywing Frontwheel class. He was able to lay down two perfect runs with his Awesomatix A800FX Evo in the first two A-main finals, and nobody was able to pressurize him into a driving error. Nicolas Delisé from Belgium finished second in both runs with his Mugen Seiki MTC2-FWD car and has the best shot for finishing second overall as well. Torsten Baggendorf crossed the line in third place in both runs and is sitting third overnight.

In the last Hobbywing Frontwheel A-Main, Nicolas Delisé was able to highlight his great weekend with a win. He was followed by Torsten Baggendorf and Max Weffers, while Mischa Kroos and Patrick Jongenelis finished 4th and 5th in A3.

The overall result will see Nicolas Delisé in second and Torsten Baggendorf in third place behind race winner Steven Olsen, who was not on the line anymore in A3 after taking the win in the first two legs on Saturday evening.

The track in Apeldoorn is a good place for the German driver Dominik Reile. He took the win here last season and was able to repeat that at the first race of ETS Season #15. In the first leg, he took the win 1.7 ahead of Kevin Schmid, after second place starter Jasmin Donath dropped all the way down to P8. Michael Koos had a great drive to third place with his “old” A700 car.

The second leg was another demonstration of clean 17.5 stock racing from pole sitter Reile. He checked out at the start of the race and took another win in front of Schmid. With two wins in the bag, he is the overall winner with his Awesomatix A800MMX here in the Netherlands – a perfect start into the new campaign for Reile. Daniel Pöhlmann finished third in A2, Jasmin Donath crossed the line in the fourth position.

After Dominik Reile won A1 and A2 yesterday, he was not on the line anymore in the last leg on Sunday morning. Kevin Schmid was the man in A3 and drove to a well-deserved win which secures him second overall on the podium. Jasmin Donath finished second in A3 with a great recovery after a bad start. Michael Koos, Timo Siebert, and Tristan Bergheim completed the top 5 in the last A-Main of the Orca 17.5 Stock class here at ETS RD1 in Apeldoorn.

In the end, Kevin Schmid and Jasmin Donath secured their spots on the podium with their results from A-Main number 3 here in Apeldoorn.

After Elibert Sievers had a brilliant drive to the win in A1 of the ToniSport 40+ Masters class, it was Toni Mateo who took the win in the second final after Sievers had some trouble in the early stages of the race. With these two results, the overall win is still wide open, and we hope for a dry Sunday morning to battle it out on the track.
Torsten Baggendorf finished second in A1 with Toni Mateo following in third place, and Flavio Paladin took second in A2 with Thomas Oehler in third spot.

The third final of the ToniSport 40+ Masters class saw TQ Elibert Sievers bringing home the win. He had a perfect start and crossed the line with a gap of 0.9 seconds ahead of a hard pushing Torsten Baggendorf and A2 winner Toni Mateo. This result let them step onto the podium in the same order, followed by Flavio Paladin (4) and Thomas Oehler (5). For Elibert Sievers, it was the second win in a row here at the AMCA Apeldoorn after he was able to win in 2021 as well. 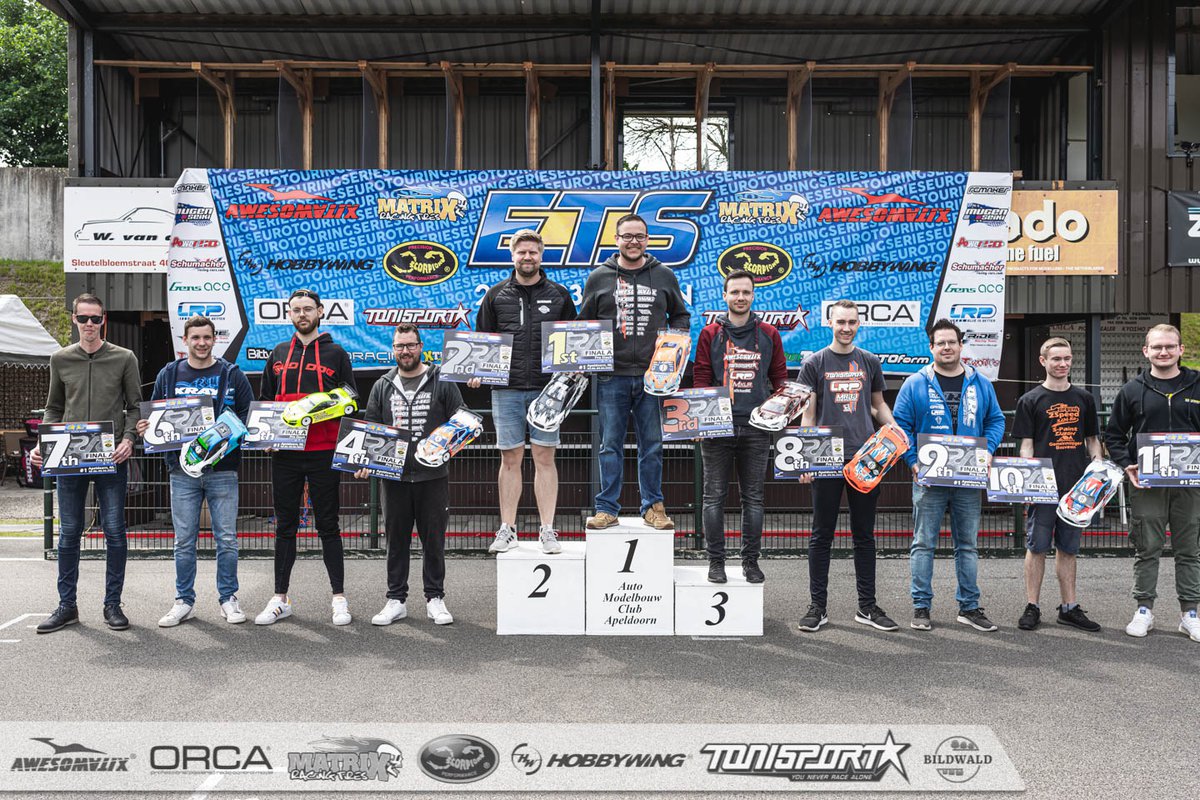 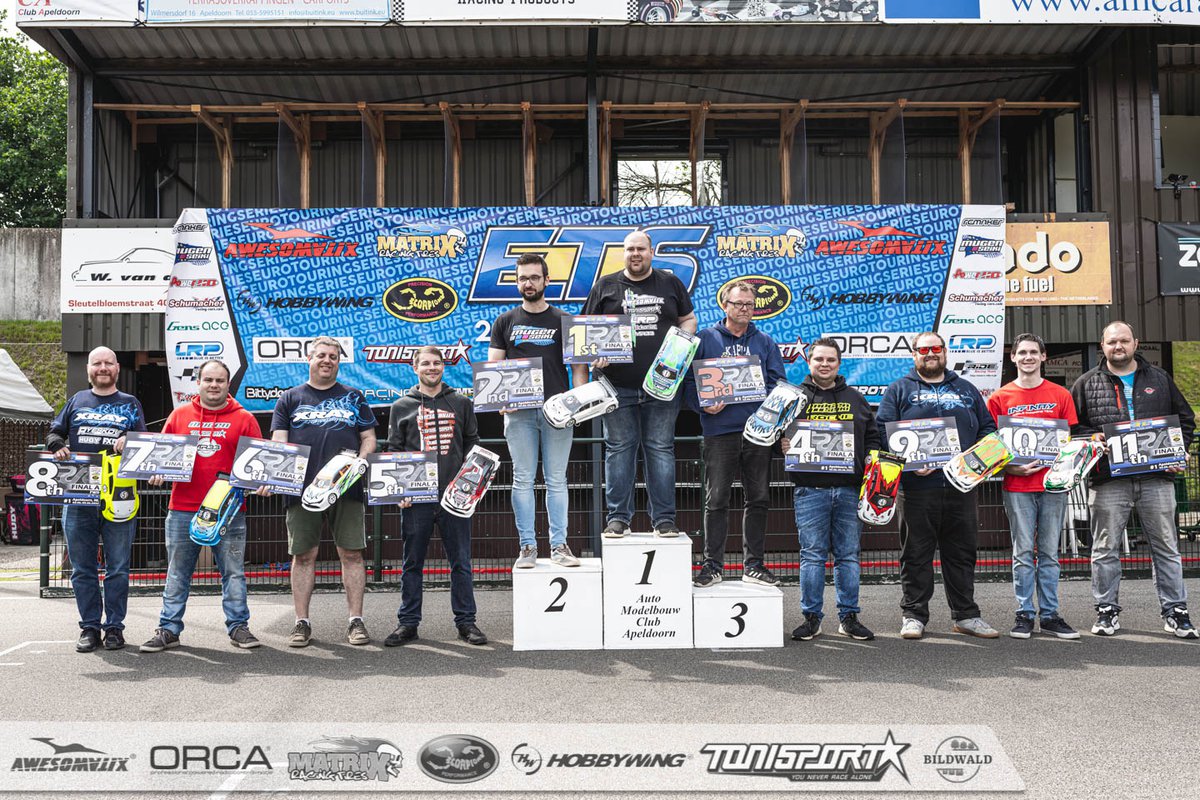 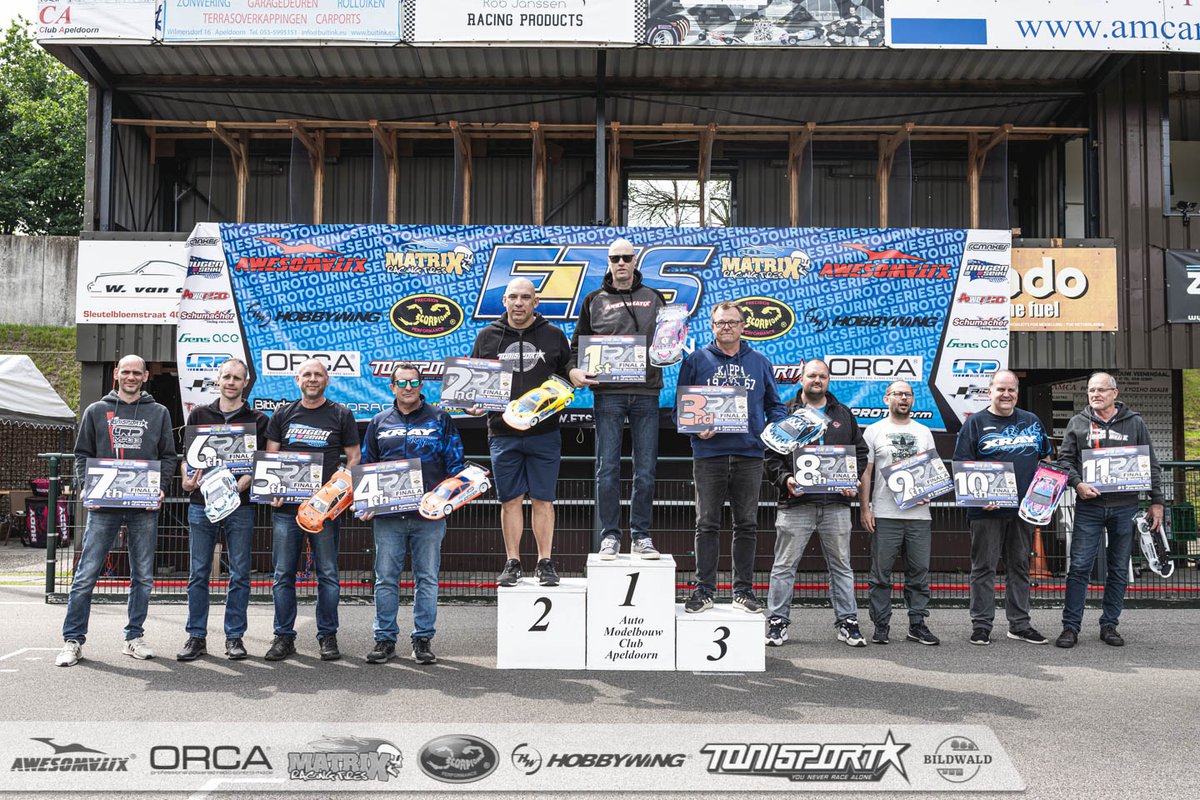 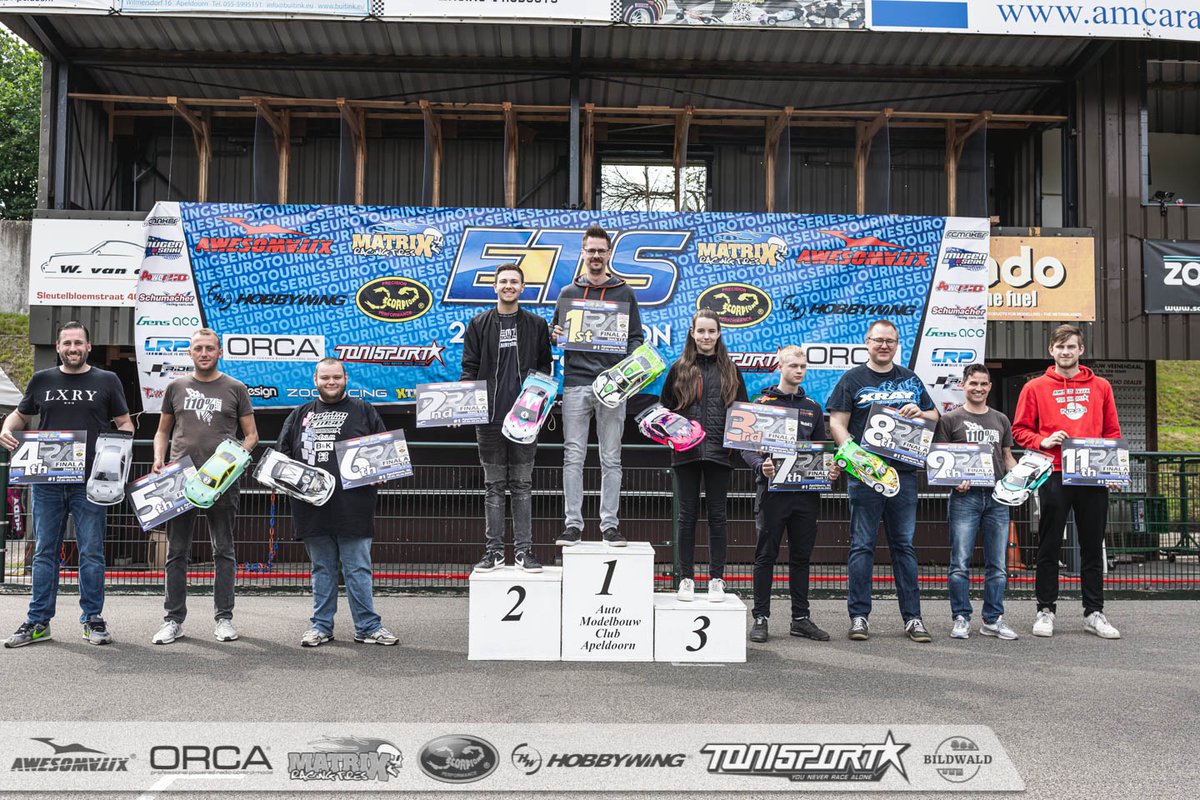