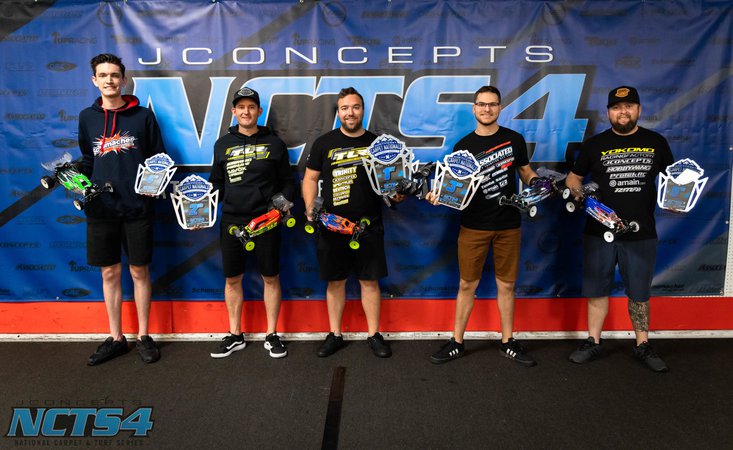 We are officially halfway through our NCTS4 series! We hit stop #2 at Northwest Hobbies in Albany, Oregon, this past weekend. Northwest Hobbies offers a lot to the Pacific Northwest. They have an off-road carpet track, a practice track for beginners, a drift car course, crawling, oval carpet racing, a fully stocked hobby shop, and more! The modified buggy classes over the weekend were stacked. We had drivers such as Dakotah Phend, Spencer Rivkin, Ryan Maifield, Broc Champlin, Ryan Cavalieri, Ty Tessmann, and several others! Next month, is the first ROAR 1:10 Carpet Off-Road Nationals which will be at held there as well, so this race was the perfect warm up! The format for the weekend was the standard JConcepts event format:

Check out all the photos from the event here.

Above is the official track layout from the weekend. It was quick, challenging, and enjoyable to race on. Carpet racing is always a challenge as you have to be committed to your lines to be fast. However, it’s easy to make one fatal mistake. The average lap times were pretty impressive. In 2wd and 4wd Modified Buggy the A-Main drivers were averaging 13.8-14.5 second laps. This year we had multiple tire options with the Fuzz Bites being available. We had drivers experiment with  Nessis, Swaggers, and Fuzz Bites. Sammy Moran won 17.5 Expert 2wd Buggy using Swaggers in the front and Nessis in the rear. Dakotah Phend won 2wd Modified Buggy using Fuzz Bites all the way around. Lastly, Spencer Rivkin won 4wd Modified Buggy using Fuzz Bite fronts and Nessi Rears. There isn’t a one-size-fits-all when it comes to tires on this track, but every driver found what worked best for them and their driving styles. Another detail to note, is that many drivers were gluing their sidewalls. Stay tuned, for a tutorial on that soon over on our YouTube channel!

A1: Phend, the TQ, of 2wd Modified Buggy, would lead the way. Cavalieri started behind him in 2nd and Rivkin started 3rd. Phend quickly started to create a little bit of space between Cavalieri in 2nd. Rivkin was on Cavalieri’s wing looking for a moment to take over 2nd. However, the race was relatively uneventful as they finished in the same order they started. Phend finished 1st, Cavalieri 2nd, and Rivkin finished 3rd.

A2: Phend led the way, and tried to pull away from Cavalieri in 2nd. A couple of laps in, Cavalieri got a little sideways through the step down, Rivkin got by into 2nd and Champlin moved up to 3rd. Rivkin got a little wonky over the triple with 3 minutes to go and Champlin got by into 2nd. They cruised around for a few more laps. With 2 minutes left in the race Champlin traction rolled in the straightaway and Rivkin took back 2nd. They meandered along for the remainder of the race. Phend took 1st, Rivkin finished 2nd, and Cavalieri finished 3rd.

A3: Phend wrapped it up early after winning both A1 and A2. They would race it out for the remaining podium positions. Cavalieri, Rivkin, and Foote would start the race as your top 3. Foote got caught up in the dreaded step down a minute into the race and Maifield took over 3rd. Champlin was running in 4th but had an unfortunate break on lap 5. From there they cruised along for the remainder of the race. Cavalieri took 1st, Rivkin finished 2nd, and Maifield finished 3rd.

A1: Dakotah Phend led the way for the first 8 laps with Rivkin and Champlin sitting 2nd and 3rd. Phend had an unfortunate break early on, which gave Broc Champlin the lead. 2 laps before Phend broke, Champlin passed Rivkin and took over 2nd. Champlin and Rivkin had been nose to wing the entire race. On lap 15 they went over the step down and Champlin snagged the pipe a little bit, and Rivkin made the pass into the lead. In the final 25 seconds, they went side by side down the step down, through the S-turn. Champlin pulled into the lead right before the double. They flew down the straightaway and over the triple, Rivkin took back the lead. They went back through the step down, Rivkin bobbled and Champlin took the lead once again. The race concluded as Champlin, Rivkin, and Cavalieri.

A2: Phend led the way, but after some chaos on lap two after the straightaway, he fell back. Rivkin made it out in first, Tessmann in 2nd, and Cavalieri in 3rd.  Everything flowed for several laps and the battle brewed between Tessmann and Cavalieri. Gonzales was running 4th and Maifield was in 5th. Tessmann made a mistake and Cavalieri took over 2nd. Gonzales moved up to 3rd and Maifield was now in 4th. The battle for 3rd became the primary battle.  The pressure was on, Gonzales had a bobble and Maifield got by into 3rd. There was 1 minute and 30 seconds left on the clock. The race concluded with Rivkin in 1st, Cavalieri in 2nd, and Maifield in 3rd. It would go to A3 to determine the winner.

A3: Everything was on the line in this final A-Main event. Phend led from the tone once more and quickly tried to pull away. The main battle was brewing between Rivkin and Champlin but they were keeping up with Phend as well. They’re running nose to tail, Rivkin clipped the pipe and got on two wheels before the double. Champlin got by into 2nd. On the next lap through the S-turn, Rivkin pushed his way through the inside line and took back 2nd. 1 minute and 30 seconds left to go, Rivkin got on two wheels going through the step down and Champlin took back 2nd. They were still nose to wing, bumping their way through, and  trying to secure that 2nd position to lock in the overall win. Champlin got it wrong going over the triple, Rivkin took back 2nd. They were running so close together. The race concluded with Phend in 1st, Rivkin in 2nd, Champlin in 3rd.

Congratulations to Spencer Rivkin, Dakotah Phend, Sammy Moran, and Brent Thielke on their wins! Thank you to all of our drivers who came out and supported the NCTS4 Northwest Carpet Nationals! We were stoked with the turnout this weekend and we look forward to seeing everyone at the next race! Stop #3 in the NCTS4 series will be at RC Madness in Enfield, CT. Mark your calendars for September 9th-11th! Thank you to Casey Vitale and his Northwest Hobbies team for hosting a fantastic event! Lastly, we want to thank our sponsors for making this possible: Hobbywing, Willspeed, ProTek RC, 1Up Racing, Tekin, Amain Hobbies, Team Associated, Reedy, Schumacher, DRC, TLR, PDX RC Underground, and Sunpadow. 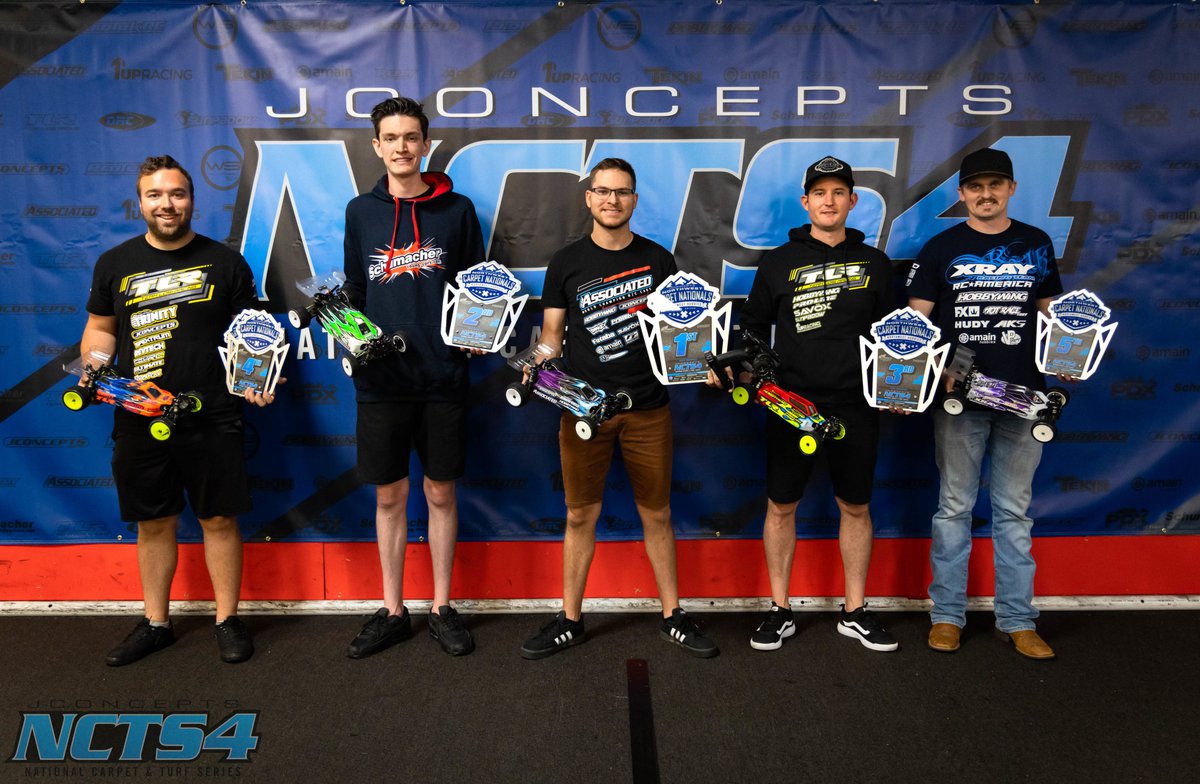 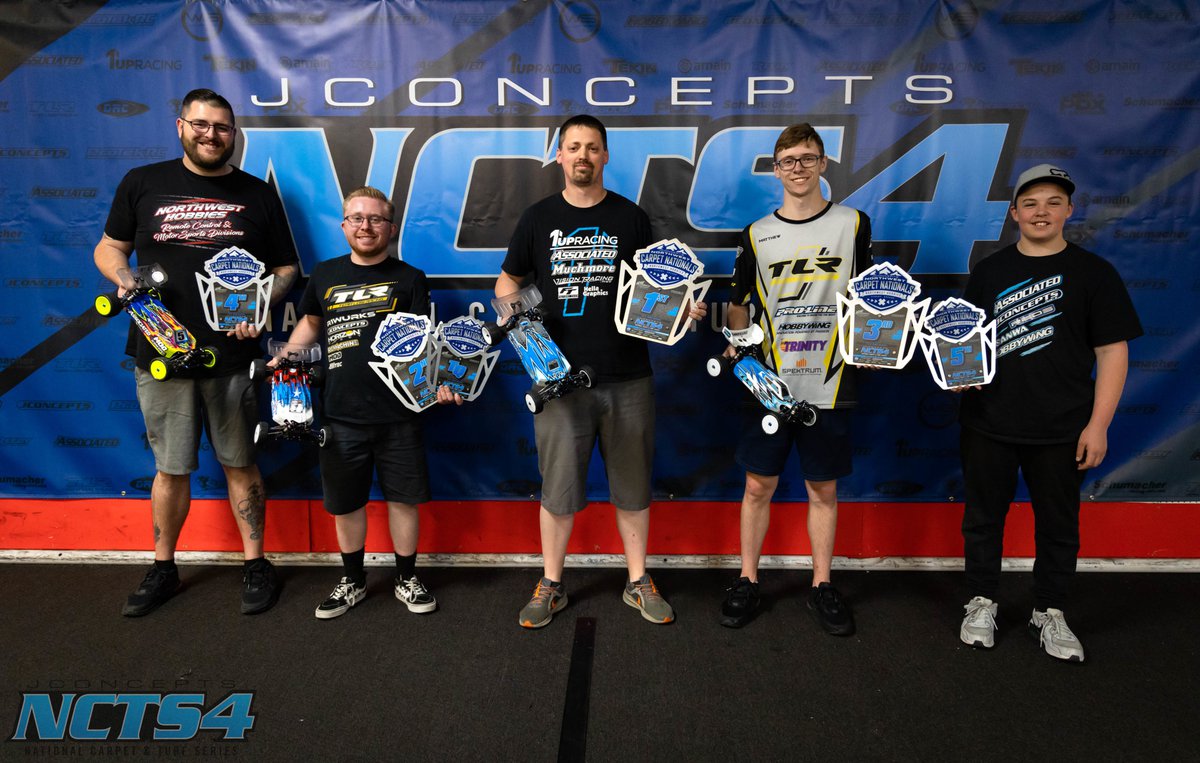 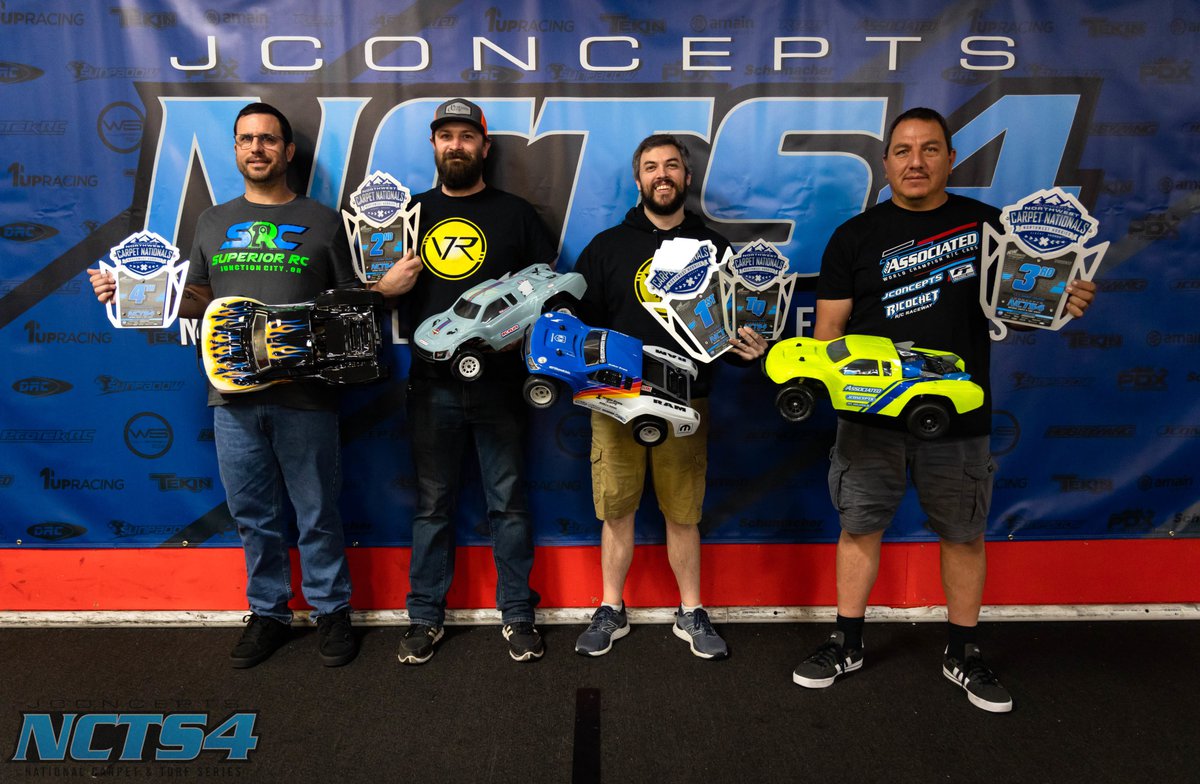 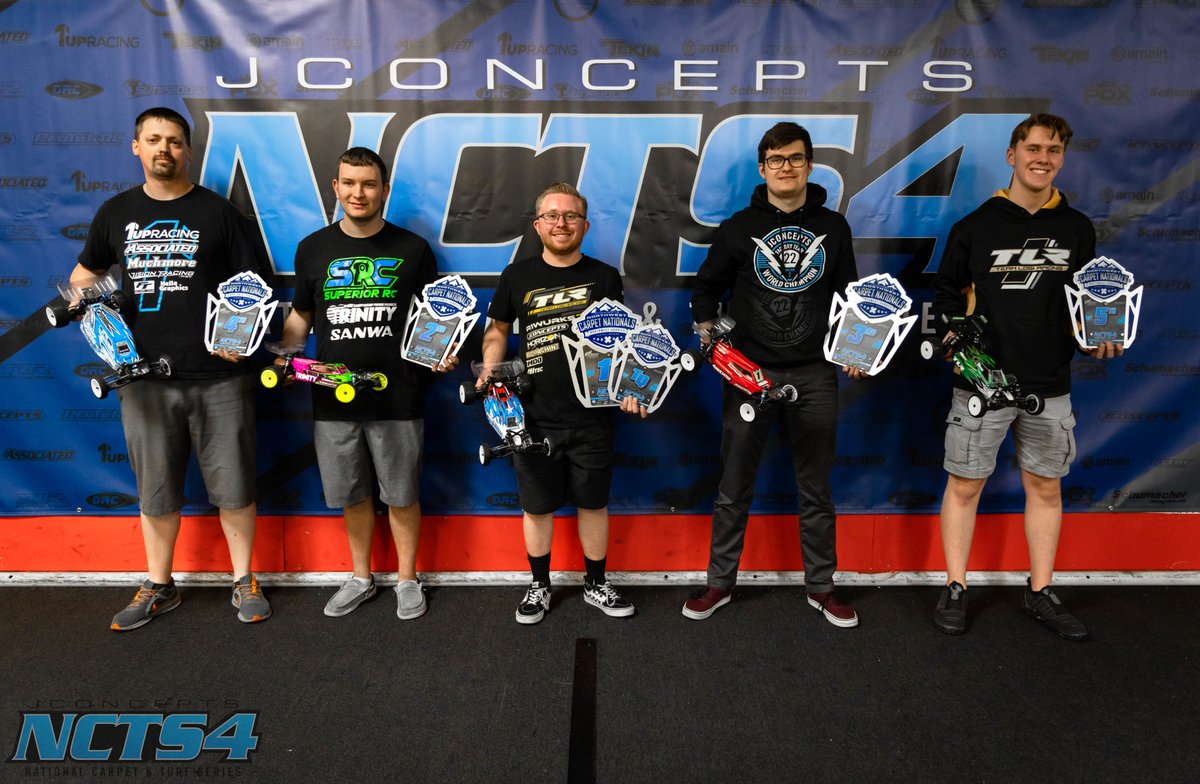 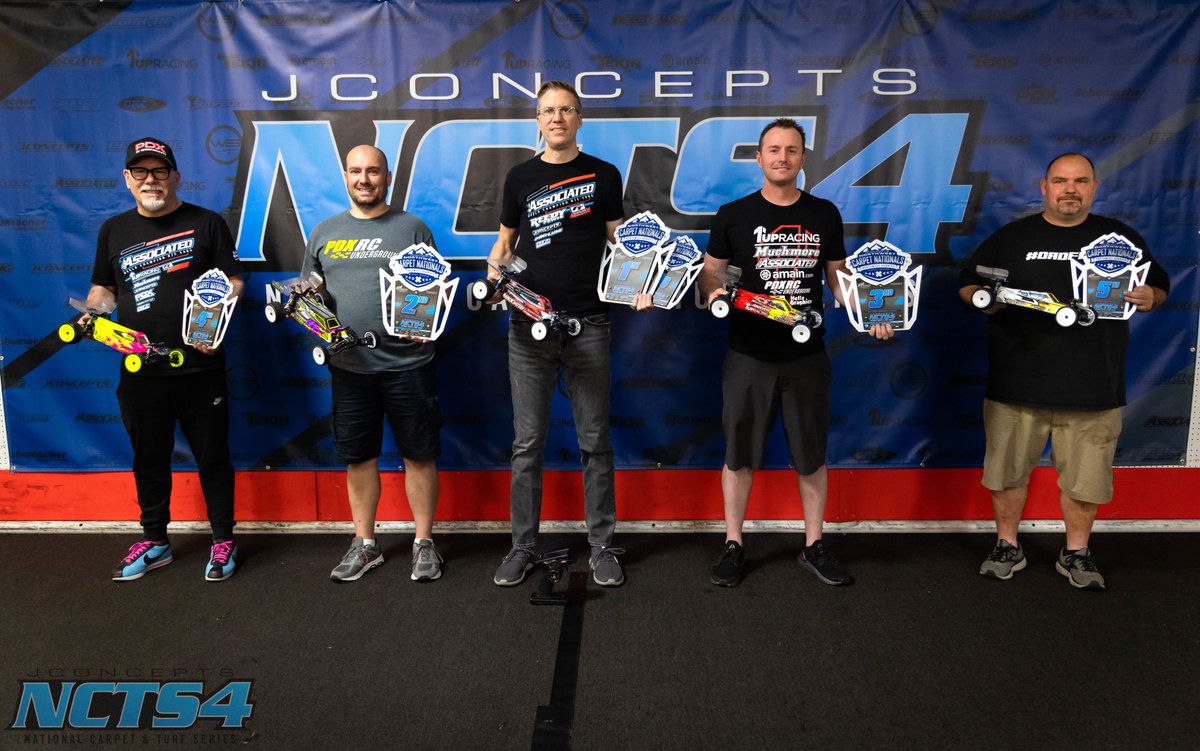 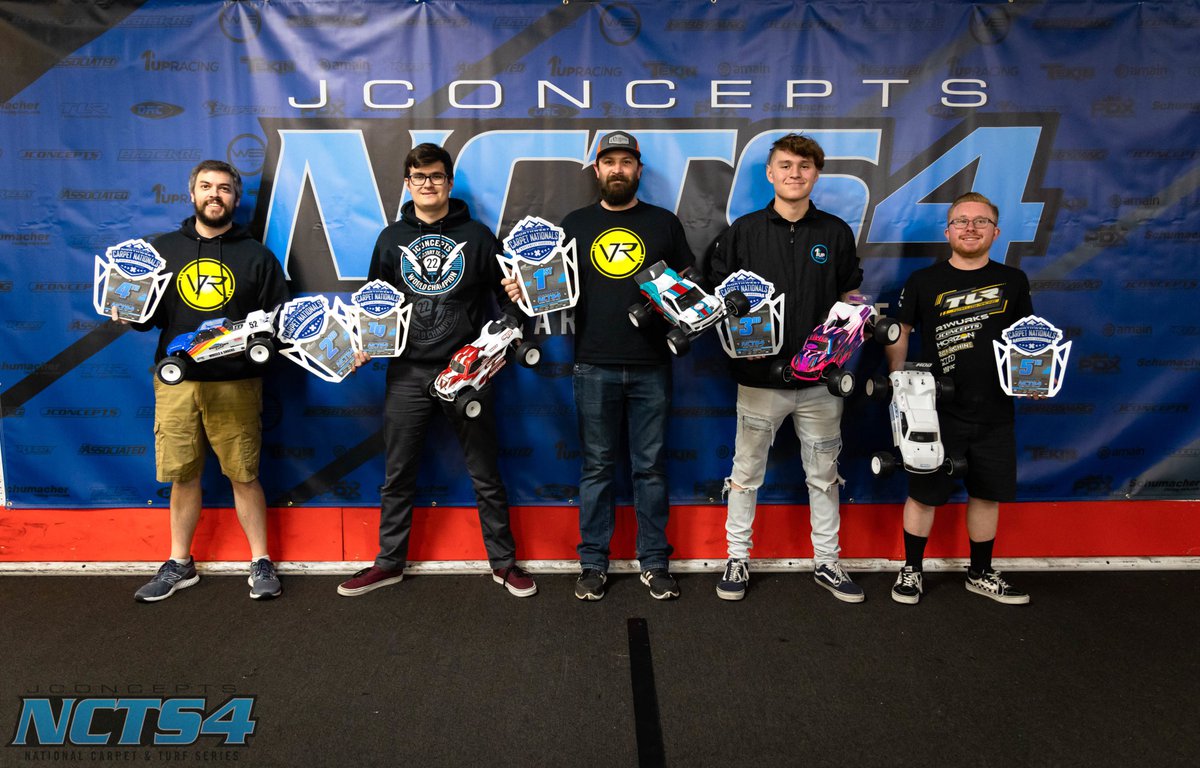