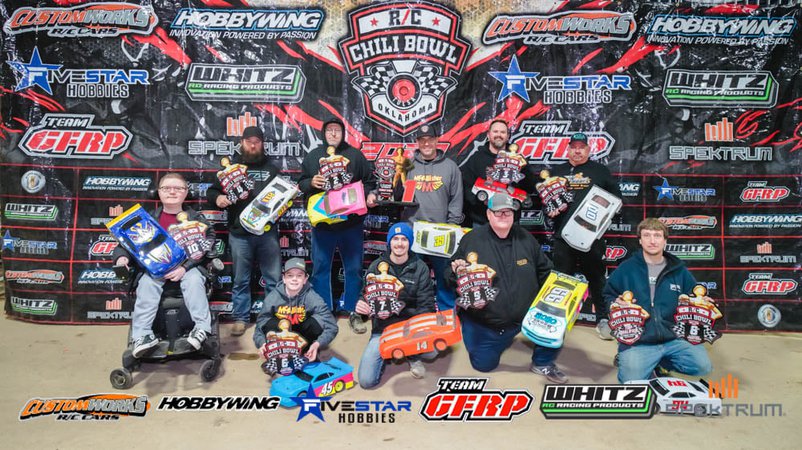 2022 RCCB - It’s a wrap for the finals at the 2022 RC Chili Bowl and as expected, they didn’t disappoint! You never know how you will finish in the Amain Final with a lot of skill needed along with a bit of luck with traffic to finish on top. Suffice it to say that although there were many drivers that were expected to win, did win, there were many that surprised coming from the back to score a podium finish! Here are how the Amain Finals went down.

Late Model Presented by 5 Star Hobbies
Patience is a virtue they say and this is especially true in RC dirt oval racing. Sometimes waiting for something to happen while you run a clean race is the way to go as Robert Chapman found out. Starting seventh on the grid and about a handful of laps into this final, Chapman found himself quickly moving towards the front of the pack as some crashes shook things up in the order of the race. Coming from the back was trending with the rest of the field as at the end of the race, Grant Ryals would come from the fifth starting spot to finish second and Eric Salvas would come all the way from tenth starting spot to claim third place! Robert Chapman would hold the front position to take the win.
1 Robert Chapman
2 Grant Ryals
3 Eric Salvas
4 Max Flurer
5 Alex Fanning
6 Chad Jones
7 Brian Breckenridge
8 Doug Gaut
9 Justin Driemeier
10 Dustin Malicoat

Masters Sprint presented by Whitz Racing
The Masters Sprint class was stacked with the talent running deep in this group. TQ Eddie Hill had been running good all week and his top spot at the front was well deserved. With racer’s fast laps in the sub 5.4-seconds, it was really anyones race if they could just pull off a super clean run. The one and two qualifiers got off cleanly with Hill and Brian Laurent leading the charge. Disaster would strike though with about a minute to go as Hill would get collected in a crash knocking him back one full lap and Laurent would inherit the lead. The race would finish with Laurent taking the win, Eric Salvas finishing second and Darrin Ryder claiming the third spot.
1 Brian Laurent
2 Eric Salvas
3 Darrin Ryder
4 Stroker Ace
5 Eddie Hill
6 Josh Wick
7 Jason Van Hise
8 Tim McNutt
9 Tony Neisinger
10 Jeff Green

Midwest Modified Presented by Spectrum
At the beginning of the Midwest Modified final, it was clear it was going to be a two horse race. Getting away cleanly at the start, TQ Grant Ryals had second qualifier Justin Driemeier hot on his tailpipe as the two zig and zagged through traffic. Fate would step in, or rather traffic being lapped as Ryals got caught up in some with Driemeier capitalizing on his misfortune. While all this was happening, battles were taking place with fourth qualifier Zachary Freeman fighting to keep close to his starting position. At the sound of the end town, Driemeier would claim the win with Ryals second and Freeman making up a position to claim the final podium spot.
1 Justin Driemeier
2 Grant Ryals
3 Zachary Freeman
4 Dustin Helsel
5 Robert Chapman
6 Brindon Hejny
7 Cody Nye
8 Doug Gaut
9 Tyler Keel
10 Max Flurer

Non Wing Sprint Presented by Hobbywing
Wingless Sprint is a great class with the great equalizer being the Hobbywing hand out motor. The way then to a win is car setup and driver talent. The man to beat in this class was Matt Murphy, who top qualified in the class. As the final got off to a start, Murphy had as slight bobble that knocked him back to the second position momentarily, but managed to get it back a couple laps later. Not letting him walk away with the win that easily, Zippy Gone and Josh Ray persisted and stayed on the lead lap. As the three made their way through traffic all race long, they would go on to finish one, two and three at the end tone with Murphy taking the win, Zippy taking second and Ray in third separated by less that four seconds!.
1 Matt Murphy
2 Zippy Gone
3 Josh Ray
4 Zac Rose
5 Broc Champlin
6 Addison Krol
7 Mike Perrier
8 Ronnie Richardson
9 Matt Perrier
10 Jamie Tennies

Outlaw Sprint Presented by Custom Works
The premier class of the weekend was the Outlaw Sprint class and if you want to race in a competitive class, this is it. Picture trying to control a bullet on wheels while making your way through traffic and this is what its like to drive one of these cars. Justin Driemeier was on the point and leaving the group at the sound of the start tone. With second qualifier Ryan Ralph in tow, the two were battling for almost all the race at a blistering pace. With time running out and a minute to go, bad luck would show its ugly head and collect Driemeier in a crash and that would be all she wrote. Dustin Malicoat would impress with a solid run coming from all the way back in the seventh starting spot to claim an over all second. Chad Jones would come from fifth on the grid to finish in third.
1 Ryan Ralph
2 Dustin Malicoat
3 Chad Jones
4 Ross May
5 Zac Rose
6 Alex Fanning
7 Justin Driemeier
8 Tyler Keel
9 Grant Ryals
10 Brian Breckenridge

Short Course B Mod Presented by Sticky Icky
Cane Wheeler worked hard all week to dial in his car and this would pay off scoring the top spot in the SC B Mod class. As the favorite to win going into finals day, luck would not be on Wheelers side this day as he would get knocked all the way to the back of the pack at the end of the first lap. The opposite was true for second qualifier Jason Van Hise as he said, thank you very much sliding into the front of the pack and would not look back the remainder of race. The rest of the pack wasn’t immune to entanglements the middle of the group would get involved in a few crashes midway through the race bring up the rear up front and center. When the dust had settled, Van Hise would effortlessly cruise in for the win and eight qualifier Jody Metzger taking the second spot and Troy Alford coming all the way from the ninth spot.
1 Jason Van Hise
2 Jody Metzger
3 Troy Alford
4 Jason Walecki
5 Mike Malmgren
6 Cane Wheeler
7 Tyler Dears
8 Ty Langworthy
9 Jerrod Crumrine
10 Trevor Pearson

Short Course Modified Presented by DE Racing
There was a story developing in the SC Modified class and if you would assume it was TQ Ryan Ralph, you would be partially wrong. Though Ralph had been ultra fast in this class in the qualifying sessions, Zachary Freeman was the hard charger in this final. Starting from the seven starting spot, his lap consistency was on point as he was making his way through the field with the top spot in his cross hairs. Ahead of Freeman, both Cody Babbit and Chad Jones who had qualified 2 and 3, were having a battle of their own unknowing of what was coming behind them. Suffice it to say that while they were distracted with each other, Freeman snuck and went on to finish in the overall second position. Ryan Ralph would go on to take the win and Chad Jones finished where he started, in third.
1 Ryan Ralph
2 Zachary Freeman
3 Chad Jones
4 Cody Babbit
5 Derrick Robbins
6 Brian Laurent
7 Cole Palmer
8 Brian Roberts
9 Alex Fanning
10 David Burlingame

Street Stock Presented by J Concepts
Street Stock is a great class to watch because it looks closest to what real cars on the street would look like if they were racing on a dirt oval. Jason Basham sat on the pole and it was his race to either win or lose. Initially he looked like he was going to run away with until some bad luck with traffic knocked back a few spots on lap eight. Waiting in the shadows and being patient, it would be Gary Langworthy Jr who would slide to and eventually make his way to the top spot where he would stay and cruise his way to the win. Dewayne Gann would finish second with Brad Noon finishing out the podium spots.
1 Gary Langworthy Jr
2 Dewayne Gann
3 Brad Noon
4 Scott Airport
5 Troy Alford
6 Cane Wheeler
7 Blake George
8 Jason Basham
9 Richard Terry
10 Sejin Whittle 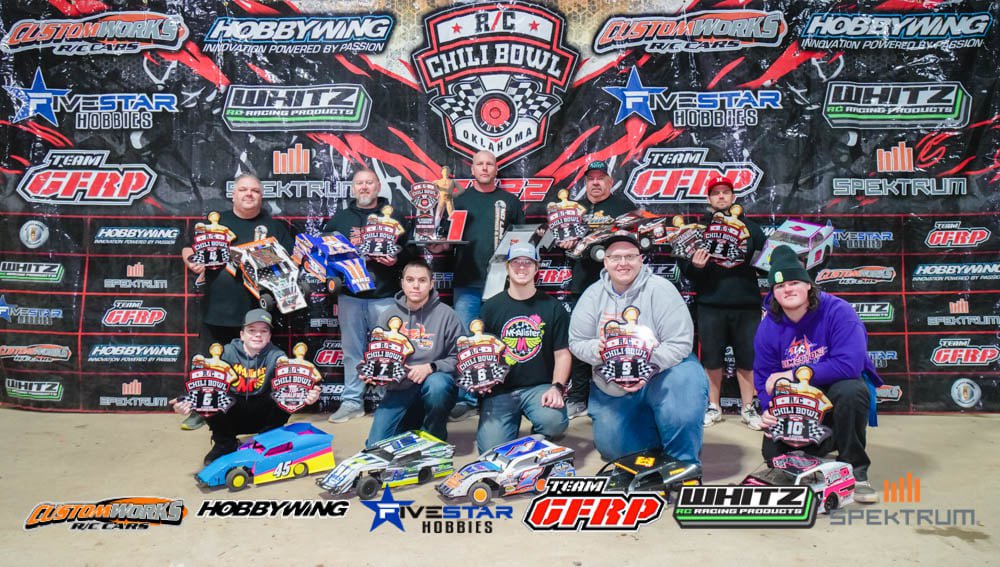 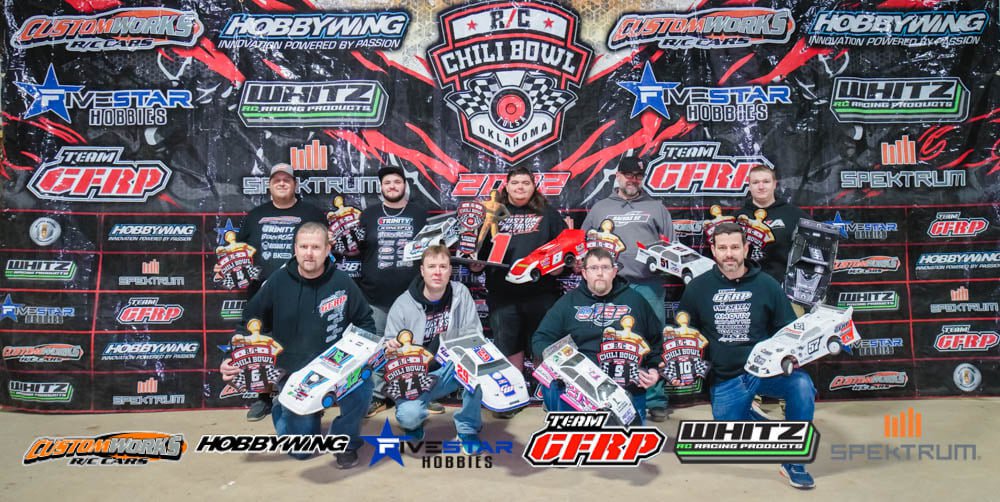 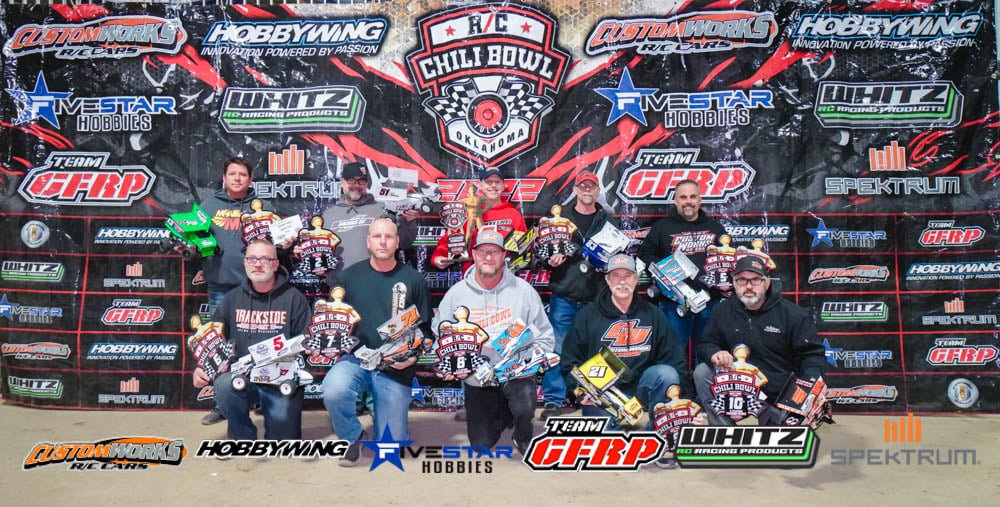 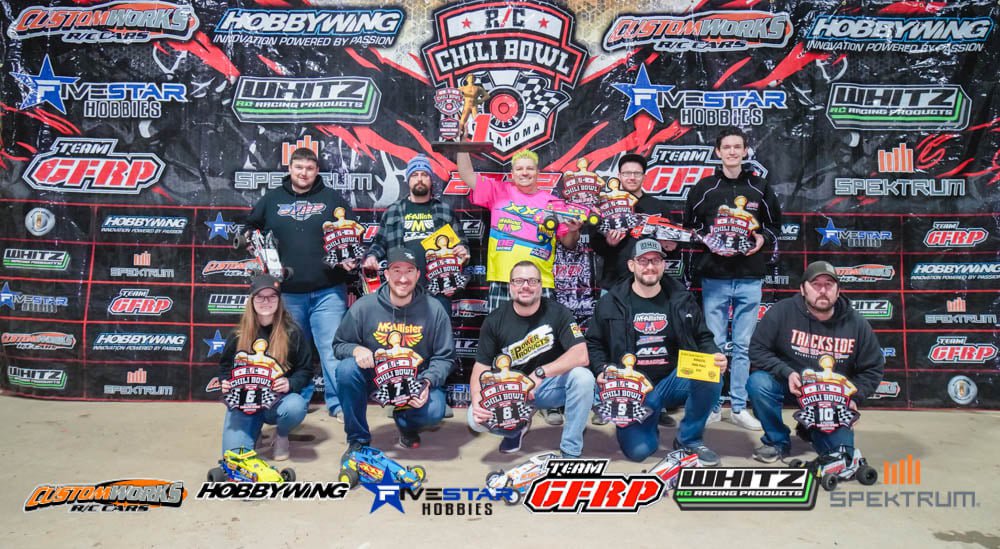 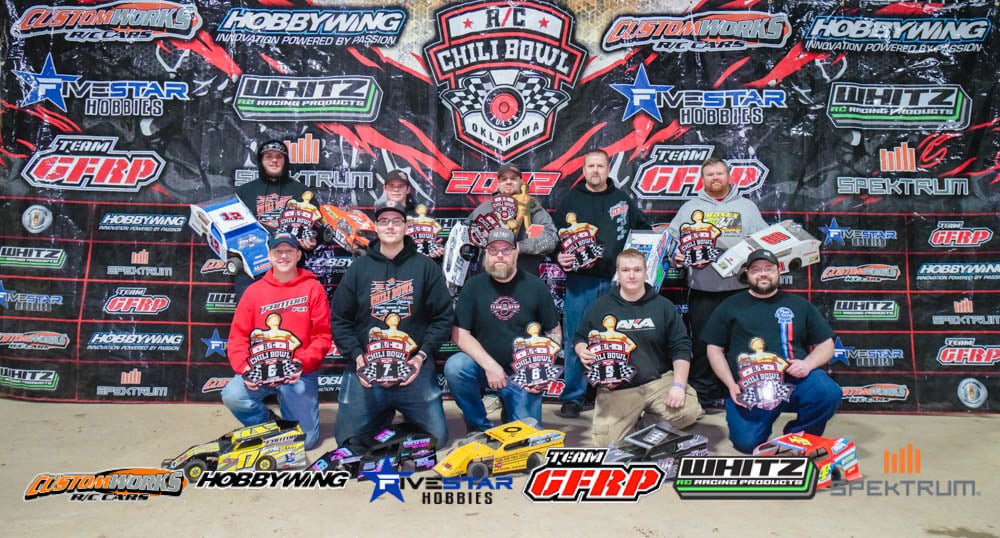 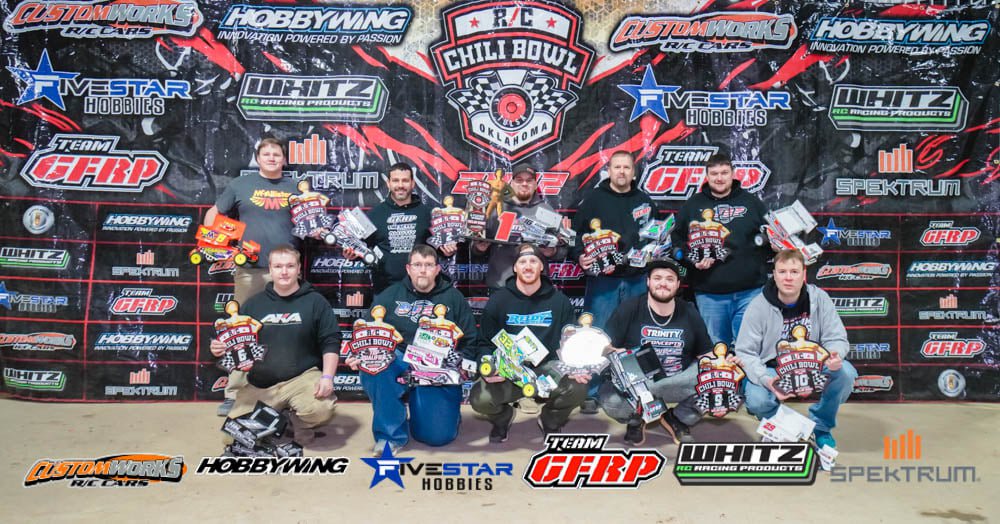