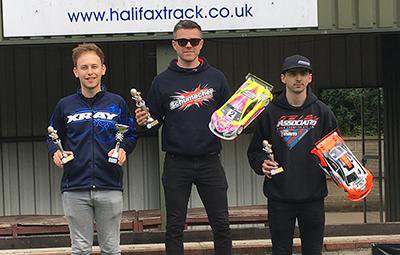 The 2nd Round of the BRCA Touring Car Series took to the North of England and one of the premier tracks in the country Halifax.

The Schumacher team had put in a lot of work over recent weeks to get fully prepared for the event and it paid off!  With mixed weather in the area there were winners and losers in both the Modified and Stock classes.

In the Modified class Schumacher's Olly Jefferies lined up second on the grid after qualifying behind Elliott Harper, but both were on a different tyre strategy so the finals would be interesting.  Schumacher's Aaron Rose and Andy Murray also made the A main.

In the first leg Olly pressured Elliott hard for the first few minutes and managed to make a pass, Elliott pushed hard to retake the lead but made a mistake in the fast left.  This enabled Olly to take victory from Elliott and Zak Smith.

In a similar scenario in the 2nd leg Olly managed to pass Elliott to take the win again, taking maximum points for the weekend, which was very important for the championship.  Zak was 3rd again with Andy Murray 4th overall, an excellent result from 10th on the grid.

In the 13.5 'Blinky' Class the wide open track would provide a different challenge to Round 1.  Once again different tyre strategies played out, with Jimmy Maddison going all in, using his new tyres in Q1 and Q2.  Zak took his time and with the track looking fast in round 4 used his new tyres to try and get the top spot.  Zak delivered under pressure and took a faster time than Jimmy to take the top spot on the grid.  James Hart took 4th and Marcus Askell 5th on the grid so Schumacher cars took 3 of the top 5 places.

Zak took victory in both legs of the finals, with rain in both during the run they provided exciting races with drivers on slick tyres in the damp conditions.  Jimmy finished 2nd overall and Darren Lee 3rd.

A fantastic weekend for the team with maximum point scores heading into the next round at Bedworth next month. 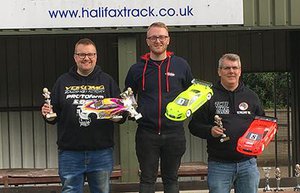