The original Wicked Weekend took place in 2012, let's take a step back in time and look at some of the winners! #FlashbackFriday

"From the producers of the Psycho Nitro event, the Wicked Weekend was run August 17th-19th in Gainesville Georgia. Sticking with their format of a horse show building, this event was another of the one-time track, using many of the same concepts that has been accustom of the Psycho event. With 257 entries of the first year event, many of the top drivers in the region were in attendance. When it came down to the trophy presentation, it was JConcepts standing on the top step.

In Electric, Max Flurer owned everything and anything electric. Taking TQ and the win in the first two A mains of the triple main format. Max used his JConcepts equipped Associated SCT’s to take the top prize in Pro2 and Pro4 using Hi-Flow bodies and 3Ds wrapped Hazard wheels to claim two of the three class wins.  In E-1/8, Max again having TQ and winning the main in two rounds with his Finnisher body and Hybrid tires on his RC8.2.

In the Nitro class Brandon Melton starting in the 10 spot quickly moved forward and was in contention by the first fuel stop. Brandon having the lead on several occasions as the pit stops played out, with the top 3 all running close the entire race. With the end of the 30 minute main approaching, Melton continued to lead the last 5 or 6 minutes and held on to take the win. Melton’s RC8.2 was fitted with the Finnisher body and Hybrids in Blue compound.Congratulations to both drivers on an excellent effort. 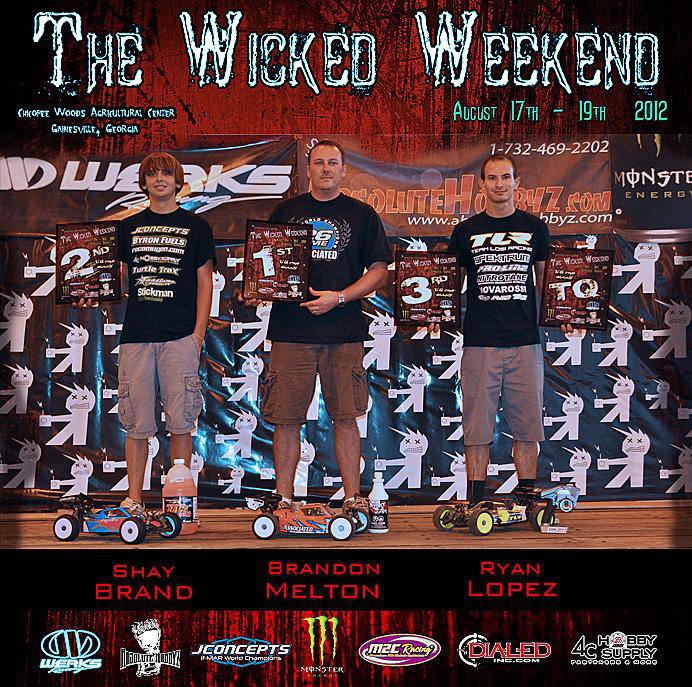